18 of the best live music venues in London 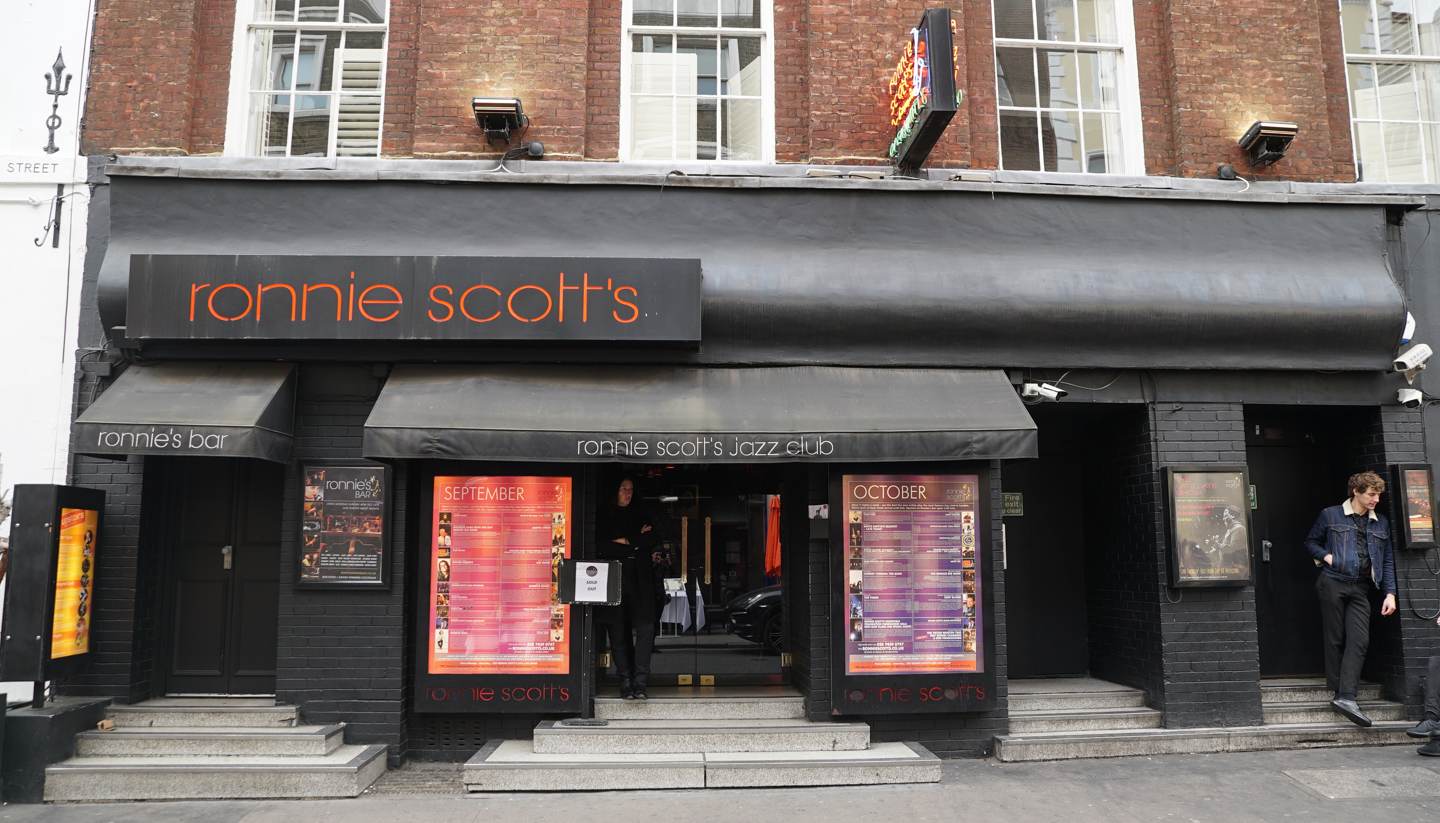 Live music and London have had a long and fruitful relationship, and nowadays there are many well-respected venues out there. Here are some of the best ones.

London’s live music scene has always been somewhat hard to find, living and breathing in the underground concerts that helped make it what it is today. However it has given rise to some excellent venues with long histories behind them, and these are the places to go if you’re looking for a real taste of live music.

If you’re prepared for a show, then here are eighteen of the best live music venues in London.

Despite the best efforts of the Luftwaffe, council demolition teams and creeping gentrification, Wilton’s continues to live on as the world’s oldest surviving music hall. Grade II-listed in 1971, it wasn’t deemed structurally sound until 2015 thanks to extensive repairs. Today it’s a magnet for plays, poetry slams and live bands, all housed under one elegantly aged roof.

No list of London’s live music venues can be considered complete without the inclusion of the Barbican. Housed in an exquisite piece of Brutalist architecture, the concert hall is home to the London Symphony Orchestra and puts on regular theatre and music performances, as well as art exhibitions and film screenings. The 2,000-capacity concert hall also enjoys wonderful acoustics, which have lured big names to its stage.

A purveyor of live music since 1942, the 100 Club helped propel punk into the spotlight of the world in the 1970s with gigs from big names like The Clash and Sex Pistols. Despite flirting with closure in 2010, this intimate venue off Oxford Street remains a pioneer of jazz, classical and alternative music. 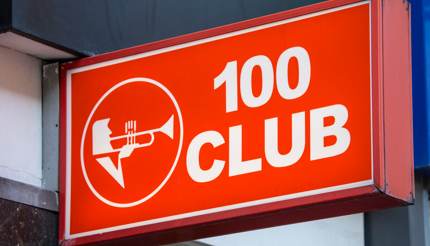 These labyrinthine catacombs beneath Waterloo station are the source of the city’s most creative thinkers. This series of subterranean galleries and theatres are collectively known as The Vaults, and the directors here embrace alternative artists and musicians. A performance down here is best viewed with an open mind.

Originally an art deco cinema, The Forum has a well-earned reputation as one of North London’s premier gig venues, pulling in everything from drag acts to megastars like Kiss, Nelly and Rihanna. Balcony seats are comfortable and offer good views, but for a proper experience you’ll want to get down on the dance floor.

Saved from the wrecking ball in 2007, this defunct Victorian warehouse turned party hub has helped Peckham carve itself a reputation as one of London’s best nights out. The multi-floored venue hosts everything from raves to disco nights, and is one of the first places to go if you’re looking for up-and-coming London talent. When the sun comes up this dynamic space also offers art exhibits, theatre performances, yoga and even a rooftop cinema. 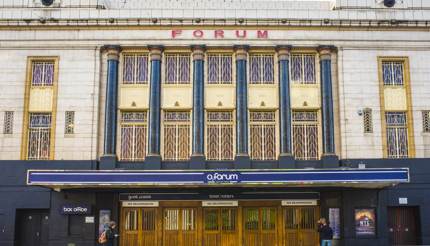 Formerly known as The Barfly, this two-storey pub made a name for itself by introducing bands like Coldplay, Muse and The Killers to small crowds of eager fans. It remains a favourite haunt for partygoers thanks to weekly hip-hop and R&B sessions, hosted by an excellent rotation of in-house DJs.

The Union Chapel is an enigma at the heart of Islington, alternating between working church, live music venue and drop-in centre for London’s homeless. The acoustics are superb and the 19th-century interior offers an exquisite backdrop to any live performance, whether it’s a choir or a band.

Originally only designed to last five years, this paradoxically named theatre has been around since the 1970s. It maintains and follows a simple aim of presenting exciting productions at low prices, and has allowed emerging talent to break onto the stage under the guidance of older theatre hands. The Young Vic also has its roots deep in the community, with 10% of tickets given away to locals who couldn’t otherwise afford to see a show. Out in Waterloo it’s about the experience, not the money. 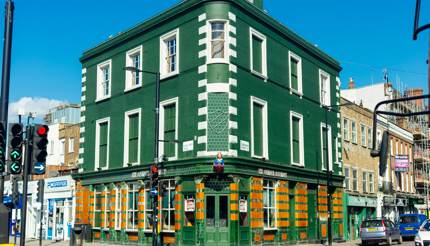 Housed in a glorious, Grade II-listed building in Notting Hill, The Tabernacle was built as an evangelical Christian church in 1887 before converting to performing arts in the 1970s. The Rolling Stones and Pink Floyd have played here, but the community-focused venue predominately hosts grassroots artists. It also does a very decent brunch.

A sanctuary for the more experimental artists out there, Café Oto looks to be little more than a steam-windowed hot coffee and home-baked cake shop. However it’s the scene for music outside of the mainstream, with adventurous live performances every day of the week. Tickets are very affordable and the atmosphere is warm and receptive, with the bar taking over in the absence of any nightly events.

Once known as Camden Palace Theatre, this Grade II-listed building is one of London’s biggest destinations in the music scene, having hosted big names from every genre of music, from The Rolling Stones to Kanye West to Skrillex. Inside you’ll find three tiers of vibrant red viewing platforms and a large central dance floor right in the middle, which gets plenty of use thanks to weekly showings of artists from all over London. 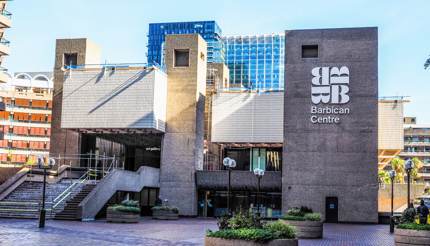 Built in 1846, this vast railway storage shed outlived its original use and is now an open space for experimental live performances. The unique space certainly lives up to its name, with the circular dance floor giving revellers an excellent view of the array of emerging artists that frequent the venue every week.

In the 1980s, when Scala was still operating as an art house cinema, it became known as the Sodom Odeon for its penchant for banned films, famed horror all-nighters and saucy sexploitation flicks. As a live music and clubbing venue, it still carries that sense of misadventure, putting on everything from flamenco percussionists to indie duos.

Restored to its former glory as a jazz-era dance hall in 2001, this ornate musical venue in Shepherd’s Bush is known for welcoming the likes of Kings of Leon and Paul Weller. However it’s a mecca for acoustic acts and newer singer-songwriters, thanks in part due to the Edwardian dance hall that gives their performances that extra sparkle. 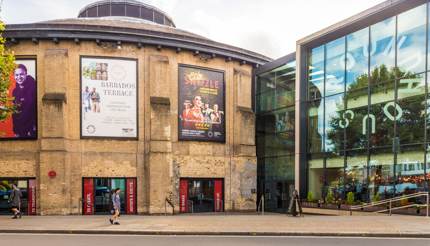 Deep in the basement of the World’s End Pub lies the beating heart of alternative music. Underworld may not look like much, but down here it’s all about the experience. Expect low ceilings and thumping music as you dance the night away in a venue that has hosted artists such as Fall Out Boy and Twenty One Pilots.

Opened by British saxophonist Ronnie Scott in 1959, this Soho institution is one of the world’s most famous jazz clubs. The legendary basement dwelling, with its soft-lit, intimate ambience and plush furnishings, has continued to host the diamonds of the jazz scene, and this revered venue is stacked to the rafters most nights.

Housed in a converted print works, XOYO’s street-art décor and metallic aesthetic fit right into stylish Shoreditch. With two rooms to choose from, emerging bands and electronica stars squeeze in during the week, before the nights are taken over by big-name DJs keen to test an ear-warping sound system. 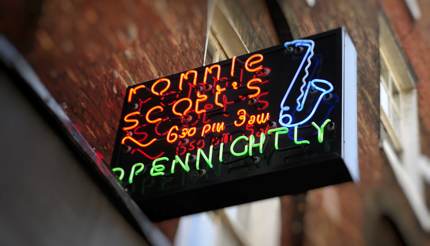