Exploring Saskatchewan, the Land of the Living Skies 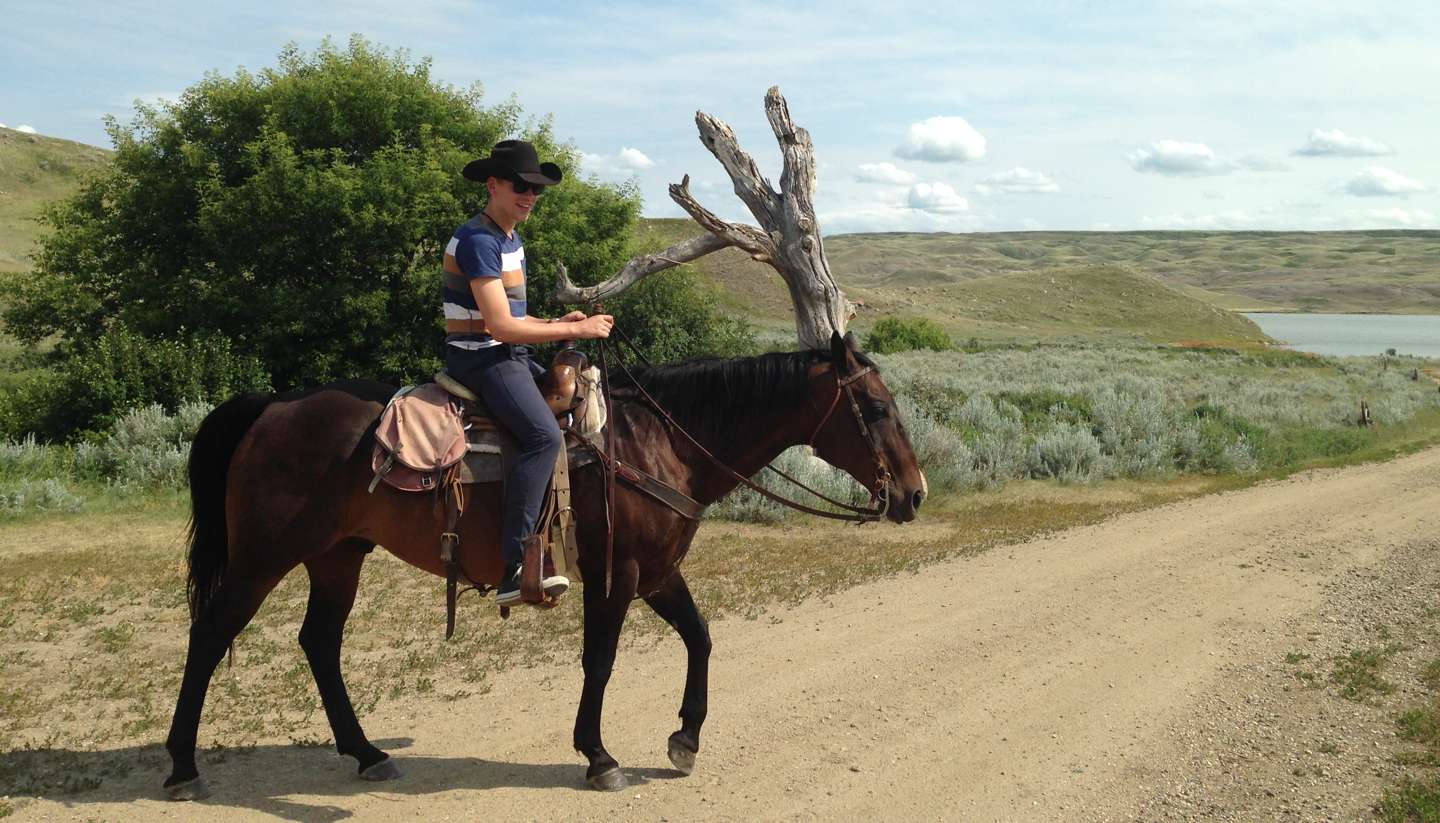 The longhorn reared its enormous head and eyed me knowingly. ‘Please don’t charge,’ I uttered politely. All the reassurance that had come with my authentic cowboy hat had shattered, and as the bull's legs began to start up, like a plane propeller kicking into life, I realised how dangerously under qualified I was for this role.

I was in Saskatchewan, traversing its unique landscape that coils from flat prairie in the south to rugged woodland in the north. The central Canadian province is (bar a few blemishes of white metropolis) like its flag: divided into two sections of green and gold.

The immense landscape is all consuming, and hikers, horsemen, fishermen and adventurers travel from across the globe to lose themselves within it. Long before I’d witnessed the pull of a pike on a fishing rod or considered the extent of the damage a bull’s horn could do to a man’s internal organs, I’d felt the wilderness of the place.

I was standing in front of a scene that could have been directly lifted from the pages of a Steinbeck novel: a red barn stood atop a small hill, with a walkway cascading down towards a selection of small outhouses, an authentic saloon and finally, closest to me, a stable with a dozen horses enclosed in a pen.

A man, perfectly fitted for the scene in his white Stetson and linen shirt, strode over to us with an outstretched palm. A dog accompanied him at his heels.

This was George Gaber, a German native who’d invested in 2,023 hectares (5,000 acres) of Canadian prairieland to build a working cattle ranch that now welcomed guests from May to October. Since 1996, George’s La Reata Ranch has introduced city slickers to the simple ways of cowpoke, with daily rides, communal home-cooked meals and late nights drinking whisky under the bright stars.

George strolled over to me with a black stallion, and told me to hop on.

Having never ridden a horse before, I tried to envisage this scenario in the UK. There would be hefty paper work and almost certainly knee pads.

‘What about a helmet?’ I asked as I attempted to swing up onto my steed.

George disappeared into the small stable and returned with a black cowboy hat.

We trotted along a dirt path that meandered across the prairie. My horse, experienced in carrying clueless amateurs, almost led himself, leaving me more time to absorb the scenery.

There was a beauty in the stretching flatness; it gave weight to the enormous expanse of blue above. It was so commanding and oppressive that for a moment I wished a thunderstorm would roll through so I could see it at full force. Suddenly, ‘The Land of the Living Skies’, as Saskatchewan is known, felt like a very fitting title.

I’d just about learnt how to get my horse to stop, when George shouted back, ‘You know what? Let’s have some fun’.

In a bizarre turn of events, I found myself as a core member of a cattle drive team that included some of George’s other guests: a honeymooning couple from Norway and a group of older women from Ohio. The aim of the exercise was to successfully separate a bull from a group of cattle.

The team, sensing my crippling inability to control my horse, put me on guard duty, blocking the pen until the bull and the cows were successfully divided. It was all going well until the large bull capitalised on a small gap between the Norwegian newly weds and began charging for the pen where I limply stood guard.

I heard screams to move, but it was already too late. I decided to simply accept my fate with dignity.

Fishing for a sepia supper

The next morning I woke early to begin my journey north.

In the end the bull hadn’t hit me. An American rider had elegantly reared her horse around and altered the bull’s trajectory enough to avoid a collision. ‘Cattle hustling’, she said, probably wasn’t for me.

The drive was a long one, and as the miles rolled by I watched the flat prairies morph into dense pine forest, while the road beneath slowly crumbled from concrete to gravel to dirt track. Once again I felt the exhilaration of leaving civilisation behind, and soon the ubiquitous landscape swallowed me.

I arrived in Missinipe, a lakeside community with a permanent population of 39, in the late afternoon. The people here lived a simple life in log cabins overlooking the clear waters of the lake, which attracts freshwater fishermen from across North America.

‘You made it,’ grinned Dylan, a local ranger and fishing guide, ‘too bad you weren’t here last night, we had a bear spotted on camp.’

We loaded up the boat with the fishing gear and got out on the water quickly to make the most of the remaining sunlight.

It was a beautiful Canadian evening, and I felt like I was posing for a sepia postcard as I sat there dangling my fishing rod lazily over the side of the boat. A lazy breeze stirred the pine fringed islets that bordered the scene and bald eagles circled silently overhead.

Although my contribution was minimal, we headed back to the camp just before the sun set with enough fish for supper. After disembarking, I took a seat on a log and watched as Dylan nonchalantly pulled a few decent sized pike from the boat and began gutting them with robotic accuracy.

‘You haven’t really experienced true Saskatchewan until you’ve had a shore supper,’ said Dylan, tossing a fish skin into the bushes. ‘For the bears,’ he added, giving me a wink.

After preparing the fish, Dylan made a fire and placed the fillets in a large frying pan with oil and lemon and tossed in some potatoes. The simplicity of the cooking brought out a zest from the tender fish, and we sat by the shore of the lake quietly enjoying our supper.

After successfully polishing off my third portion I excused myself and headed off alone in search of a spot to snap a photo of the lake at sunset.

After two minutes of walking, with only the sound of my footsteps for company, I caught the faint, intrusive, and almost alien sounding, mechanical whirring of heavy machinery. I rounded a corner and watched as two large diggers, accompanied by a fleet of trucks, tore down pine trees from the side of the main road, replanting wooden telegraph poles in their place.

Standing there, as the sun slipped silently beneath the lake, I watched the machines slowly scar the landscape. I couldn’t help but question just how long Saskatchewan’s wilds could last in the modern world where even natural beauty needs to turn a profit to be valued. I hoped that the people of Saskatchewan would continue to work with the land rather than turn against it, and with that I quickly ran back to camp before I was eaten by bears.

Getting there
Air Canada (www.aircanada.com) fly from London Heathrow to Saskatoon in southern Saskatchewan from £737 return. Most flights include a short stopover in Torronto.

Where to stay
La Reata Ranch can accomodate up to 20 guests at a time. The daily rate, which includes accomodation, meals, soft drinks, daily horseback riding and all additional on-ranch activities, is $195 (CAD) per adult per night (£110). The season runs from mid-May to mid-October. Transfer services to and from Saskatoon airport can also be arranged for an additional fee. For more information see: www.lareataranch.com. Thompson’s Camps Otter Lake Resort, offers large cabins for one to six people. For a full list of prices, check the website: www.adventuredestinations.ca.