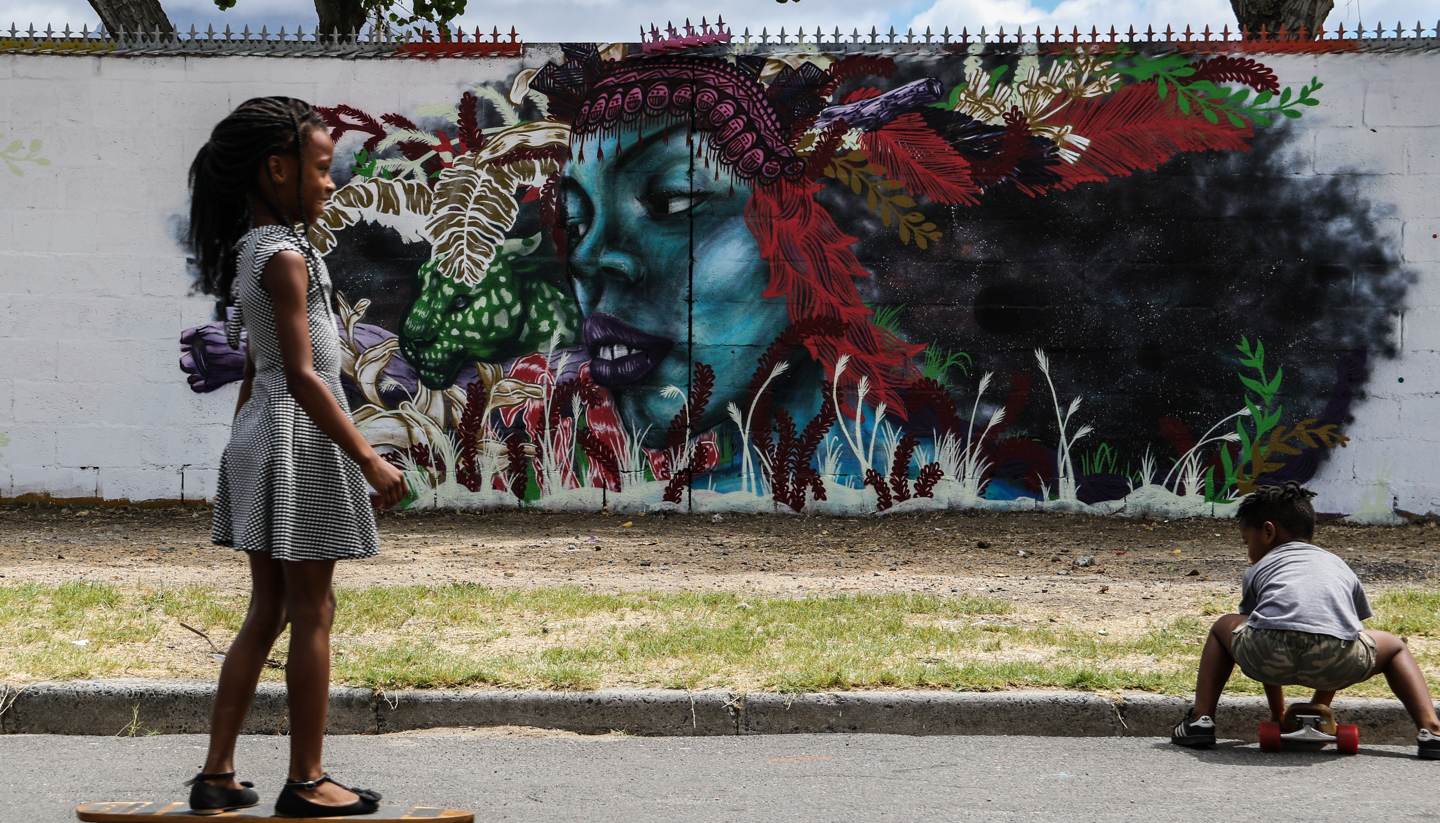 It was once described as an "apartheid dumping ground", but Cape Town's Langa Quarter has become one of the city's most exciting and optimistic districts. Chris Clark witnesses the revolution.

On a wall in the café at Ikhaya Le Langa’s headquarters, there’s a detailed and dog-eared map of Cape Town with a circle drawn around Langa. Tony Elvin, Ikhaya Le Langa’s charismatic founder, pulls the map down and brings it to our table by way of an introduction to what his NGO is trying to achieve in Cape Town’s oldest black township.

What the map reveals is surprising and powerful: Langa does not sit on the isolated peripheries of the metropole where common lore has long positioned it, but right at its pulsing heart.

As a black Londoner living in Langa, Tony is probably used to surprising people. Before he moved here permanently in 2010, the long-neglected Langa community’s interaction with Westerners had been largely limited to occasional groups of white tourists passing through on a quick “poverty safari”, as Tony disdainfully calls the archetypal township tour, before heading back to their cushy hotels.

“The advice I was generally given when I first came to Cape Town was, never even go to a township,” Tony recalls. “But when I discovered Langa, not only was it not what I was told in terms of supposedly being a sad and fearful place, it was the place where I found community still intact. There’s an energy and a spirit that is in Langa, and if we can capture that, it’s like gold.”

Through the development of a new “social enterprise precinct” dubbed the Langa Quarter, Tony hopes to share that energy and spirit with a wider audience, creating employment for locals, uplifting the neighbourhood, and broadening the general narrative of Cape Town in the process.

“The idea is to create an aspirational, cool place, not just for tourists – to create a new space in Cape Town where Capetonians can also go, not only for a history lesson, but to listen to some great jazz, see some great art, chill out and have a good time,” says Tony. “I want the Langa Quarter to be to Cape Town what the French Quarter is to New Orleans.”

We finish our coffee and take a walk around the labyrinthine streets of the quarter. It’s not hard to see what drew Tony here. The place has a contagious calm and settled feel that can only come with a long and rich heritage. Almost everyone we pass stops to greet us warmly; no one is in a hurry.

As we walk down pretty Harlem Street, a number of the pastel-coloured houses have been emblazoned with uplifting artworks; others have black plates on the walls scrawled with the names of famous black jazz musicians or political icons who once lived there. Outside the former residence of the late freedom fighter, Chris Hani, a group of young schoolboys pull grotesque faces, strike camp poses and tell us to take photographs of them.

At a cozy hole-in-the-wall bar called Fanie’s Place, a few well-heeled old men sit around plastic tables on the patio sipping straight whisky and tapping their feet to some experimental jazz that pours out of the dark room behind them. Just beyond, clients of one of Langa’s countless shipping container hair salons have moved outside onto the sunny street corner to converse and laugh as they have their hair braided.

We skirt the western boundary of the quarter back towards the Ikhaya Le Langa base. A game of cricket plays out on the large sports field that serves as the buffer between Langa and the Central Business District; the match is presided over by the majesty of Table Mountain – the view enjoyed by the smattering of spectators is as good as any in Cape Town.

Continuing down the road, a long high wall serves as a public exhibition space for the finest examples of Langa’s abundance of street art. Artists from across Cape Town are still working on new pieces; the following day, judging of Langa’s annual street art competition will take place.

Almost all of the works have an uplifting theme: in one, detailed faces from different ethnic groups stand proud above the words “Diverse People Unite”; another piece extols the beauty and mystique of a black woman’s afro.

Back at base, I’m introduced to Jace, a famous French street artist invited to Langa to give workshops to local artists, to paint and to co-judge the competition with Tony and the local community. Jace and I walk back down Harlem Street to dump our bags at Nombulelo’s house, where we’ll spend the night.

Nombulelo’s property is one of 15 that are currently used for the Langa Quarter’s Homestay Hotel. And even on this colourful street, her electric lime home stands out. Since its inception just over a year ago, this initiative has contributed more than R100,000 (roughly £5,000) to the 15 households – no small figure in an area where the majority earn less than R4,000 (about £200) per month.

Nombulelo, 67, has lived in Langa her entire life. “I’ve seen Langa change a lot over the years,” she remarks with a broad smile. She points at a derelict and rubble-strewn patch of land opposite her house, which she says was once used as a paddock for work horses when Langa was still a blacks only labour camp. She tells us that this land is soon to be developed into new low-cost flats.

In the evening, there’s an informal braai (barbecue) at Ikhaya Le Langa. The leafy courtyard of the repurposed primary school is filled with young creatives, many of whom were born and bred here. A cartoon lion, painted by Jace, watches the revelry from his new spot on the perimeter wall.

One of this year’s street art competitors plays acoustic guitar while Sisa, who is helping to organize the event, lays smooth freestyle slam verses over the top. Thola, a fierce young theatre producer, is arguing with one of the chefs about what it means to be an educated black woman in Cape Town. Hundreds of spicy chicken wings sizzle away in the background.

Meanwhile, Lungi, another of the street art event organizers, is telling me about her ongoing aim to use public art in townships to “showcase the beauty of hidden parts of Cape Town, of the places that people wouldn’t normally look at.”

At around midday the next day, my hangover has just about worn off and the judging of the street art competition is soon to begin. A local marimba band and dance troupe keep the throngs of people happy while they wait for the big moment. An Ikhaya Le Langa employee can’t resist the urge to get up and join in the performance. He throws his head to the sky as he turns like a spinning top to the fast percussion.

Finally, the time comes for all of us to move onto the street and vote for our favourite piece of art. Tony looks on from the fringes, obviously elated by what he sees. I’m sure he knows that whoever takes today’s competition prize, Langa is the real winner.

Getting there
The Langa Quarter is roughly 15 minutes by car along the N2 highway from Cape Town International. Ikhaya le Langa is easy to find and there’s plenty of secure parking on site.

Where to stay
The Langa Quarter Homestay Hotel is the perfect way to get the fullest experience of Langa. All of the current homestay properties are within easy walking distance of the Langa Quarter’s highlights. Bed and breakfast for two people sharing will set you back a mere R450 a night (about £20).

Where to eat
Along Harlem Street you’ll find Mzanzi and Lelapa, two feted Langa institutions that serve up great hospitality, a range of South African specialties, local handicrafts and live music. Langa also has a number of informal grills and takeaway stands for more daring diners. The Ikhaya le Langa café does great coffee and a menu of light meals.