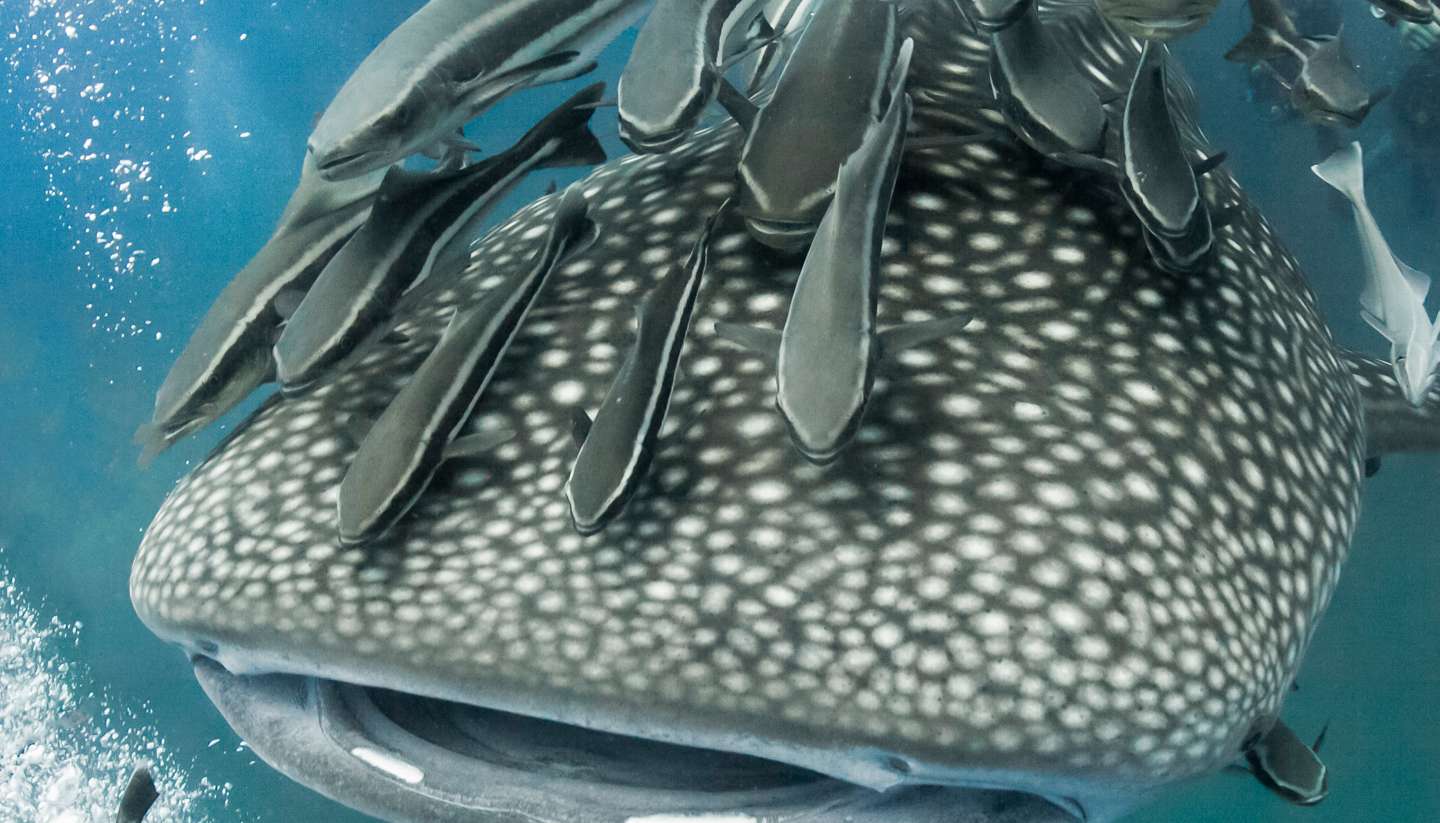 Samantha Wilson heads to Útila in Honduras in search of Old Tom, the legendary barnacle-encrusted whale shark who has plied the waters for decades.

“Put your faces in the water, sharks don’t fly!”

Bobbing among the dark, slapping waves off of the Honduran coast I hear the shout of our captain over the gentle hum of the dive boat engine. My heavy, nervous breaths through my snorkel make it harder still.

I heed his holler, though, and dip beneath the glistening surface. Finally I get a glimpse of what I have been searching for: a whale shark, the biggest fish in the ocean.

At 9m (30 ft) long, it glides effortlessly beneath my fins, sashaying gracefully with every swish of its enormous, pointed tail. I swim breathlessly alongside, keeping up with it for several minutes until it dives and its blue and white spotted body disappears into the depths of the Caribbean Sea.

You’d think that finding the largest fish on the planet wouldn’t be too difficult, but this is my forth venture to Utila’s north side after three failed attempts. Although they can grow to 14m (45ft) in length, whale sharks can also be extremely elusive.

They tend to frequent warm, tropical seas and Utila’s plankton-rich waters are a major stopping point on their great migrations along the Mesoamerican Barrier Reef.

Tilting their powerful bodies vertically, they open their wide mouths to gorge, creating a feeding frenzy which encourages small tuna to join in the feast. Known as boils, the tuna writhe in the water, their splashes alerting trained eyes to the presence of a whale shark just below the surface.

Local fishermen call them Old Tom after a legendary, barnacle-encrusted whale shark that plied Utila’s waters for decades. Back on the shore, in doorways of the stilted, pastel-coloured houses that make up the Honduras’ Bay Islands, they still tell rum-heartened tales about the great beast, which they say reached 18m (60ft) in length.

Whale sharks skim the north shore here throughout the year, but the best sightings are in March and April at the height of their little-understood migrations. Scientists have long been left baffled by their 5,000 mile-long (8,045 km) trips, and individual sharks have been tracked as far as the mid-Atlantic en route to South Africa after leaving the Belizean Reef. The mystery of where they give birth remains unanswered too, but that just adds to their magnetism.

Ulita was the island where unruly English pirates used to come in search of Spain’s golden treasures but now it lures in wannabe scuba divers with promises of PADI courses, a paradisiacal coastline and rustic eateries. The biggest prize on offer though, is a chance to see Old Tom saunter past.

Five best places to see whale sharks in the world

1) Santz Cruz Island, Galapagos, Ecuador
With a wealth of underwater life and reams of unafraid animal species, it is little wonder whale sharks can also be spotted at the Galapagos Islands. Your best chance of greeting the gracious giant is between June and November.

2) South Ari Atoll, Maldives
As a Marine Protected Area, the South Ari Atoll in the Maldives is limited to the number of human disturbances allowed to take place in its waters, which makes year-round whale shark spotting even more precious here.

4) Donsol, Philippines
Not only does Donsol have some of the clearest depths in the Philippines, authorities only allow snorkelling in the area which reduces sea life disturbances. Ethical and magical, this is the spot where whale sharks were first recorded.

5) Anse Capucins, Mahé, Seychelles
If you happen to honeymoon in October and November, the dives around Anse Capucins to the south of Mahé in the Seychelles, are ideal for falling in love with something other than your partner: whale sharks. The fish are protected here and with warm emerald waters and regular sightings, you won’t want to leave.

How to get there
American Airlines (www.aa.com) and United Airlines (www.united.com) fly from Miami and Houston to San Pedro Sula, Honduras from where public buses or domestic flights continue to La Ceiba. A twice daily ferry makes the journey to Utila.

Who to dive with
Parrots Dive Centre (www.parrotsdivecenter.com) is a locally-run operator offering PADI courses and whale shark-spotting trips.