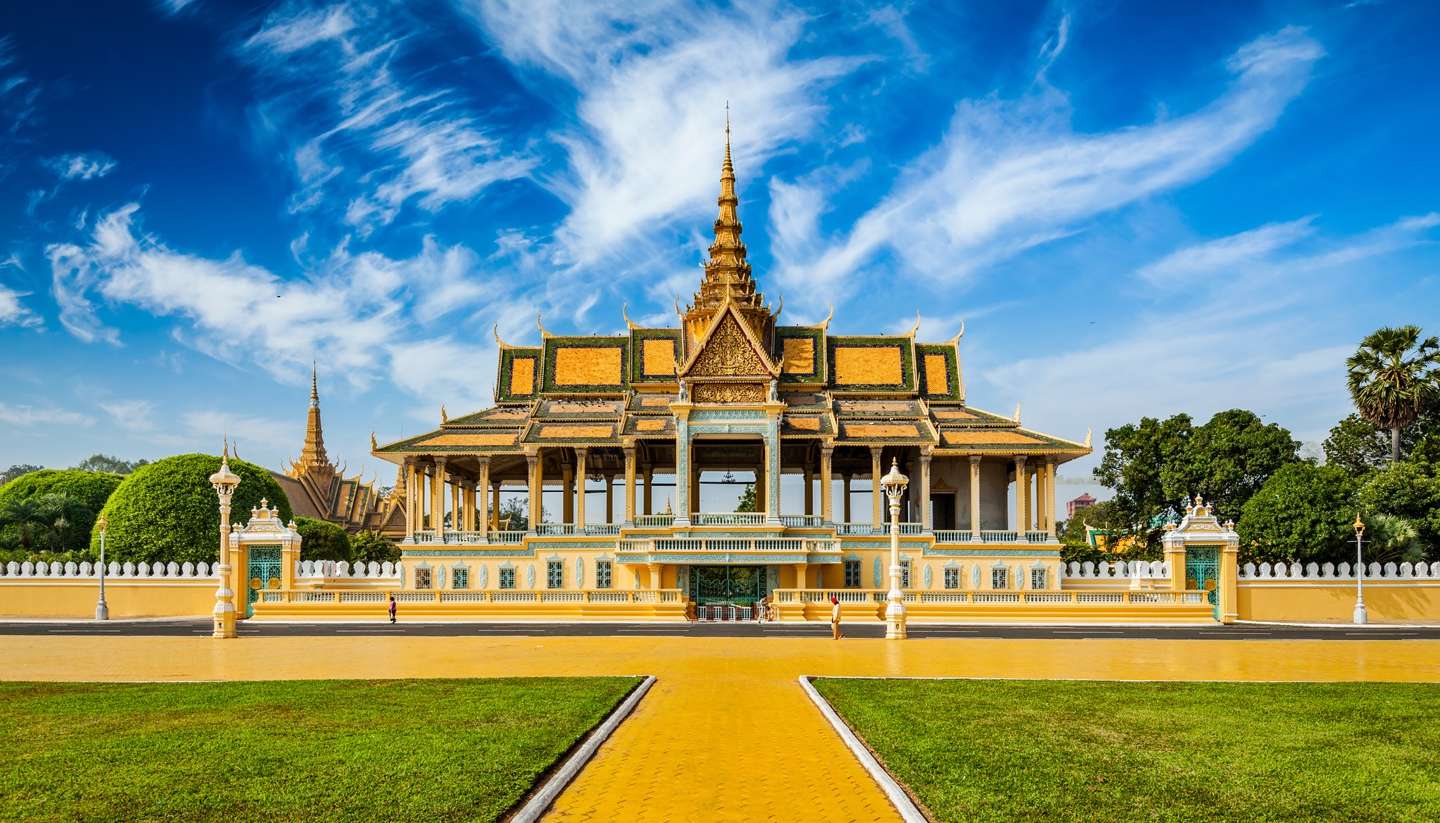 Situated at the meeting point of the Mekong and Tonle Sap Rivers, Cambodia's capital is a gritty, groovy blend of old colonial architecture and edgy new ventures.

Our 24-hour guide will help you get to grips with a city still well off the mainstream South East Asia tourist trail.

Wander down to Sisowath Quay just after sunrise and watch rusted vessels, rowing boats – and maybe even a coracle or two – floating down stream. This lively 3km-long (2 miles) artery alongside the turgid Tonle Sap river is lined with terrace cafes, indie shops and old colonial buildings, and is the best place in town to enjoy breakfast.

Head for Riverside Bistro (273A Sisowath Quay, corner of street 148), order a cafe au lait and fresh croissants, then sit and watch locals doing their morning exercises to blaring music along the waterfront. Linger at colourful art-and-craft stores like Happy Painting gallery (363 Sisowath Quay), then head north along Sisowath Quay until you reach the small boat dock just after Wat Phnom. Here you can take an hour-long boat ride along the Tonle Sap river for picturesque views of the Royal Palace and Phnom Penh’s distinctive skyline.

Leap out of bed before sunrise and join thousands of locals doing their aerobics in the Olympic stadium (Samdach Preah Sihanouk Blvd), Vann Molyvann’s sports complex built in the 1960s for an Asian Olympics that never happened. Towel down, then grab a seat in one of the small cafes that line the streets outside and order deliciously nourishing bai sach chrouk (rice with grilled pork and scallions).

After your typical Cambodian breakfast head opposite to Psar Olympic (Olympic market). Far less touristy than PP’s other bazaars, this multi-storey market on Sihanouk Blvd is packed to the rafters with clothes, accessories and fashion items.

Flag down a tuk-tuk and putter off to the Royal Palace. This vast complex, built in the opulent decorative Khmer style of architecture has been the residence of the country’s kings since 1866. Inside you’ll find the Silver Pagoda, a jaw-dropping Buddhist temple decked out in thousands of silver tiles,  lined with marble columns and housing a pantheon of bejewelled statues, including a 17th century Emerald Buddha hewn out of Baccarat crystal. Once you’ve marvelled at the architecture, pop over to the National Museum of Cambodia, where you can ogle one of the world’s largest collections of Khmer art.

After your tour of the these sumptuous artefacts you’ll be needing refreshment, so pop round the corner to the Daughters of Cambodia (#65, Street 178), a blissfully peaceful café run by survivors of human trafficking, where the service is super-friendly and the salads, and fruit shakes are sublime.

Use your own pedal power on a Mekong Islands Bicycle Tour with Grasshopper Adventures. This 25 km (16 mile) tour starts with a ferry trip across to the Mekong islands, known locally as Koh Dach. Here you’ll visit traditional communities, eat local specialities and discover the surprisingly lush countryside surrounding Cambodia’s largest city. You should be back in the city around midday.

After your mega-effort, weave your way through a tangle of streets lined with colonial-era buildings, making your way towards the Seven Bright restaurant (6, street 13). Famed as Gerard Depardieu’s favoured hang out in 2002 movie City of Ghosts, this eatery is better-known by seasoned travellers for its budget-friendly, all-you-can-eat lunchtime buffet. Get your strength back with a plate (or two) of local fare.

The regime of Khmer Rouge casts a huge shadow over Cambodia’s capital. From 1975-1979, some two million people were put to death or died of starvation upon the orders of dictator Pol Pot. To better understand this tragic period, take a tuk-tuk for the afternoon and  head out to The Killing Fields. Half an hour’s ride from Phnom Penh, you’re guaranteed to shed a few tears at this vast site, with its Buddhist stupa containing 8985 human skulls, where more than 20,000 people were put to death.

If you can cope with more of that sombre history, return to downtown Phnom Penh and visit the Tuol Sleng Genocide Museum (Street 113, Boeng Keng Kang). This former high school, built around a courtyard which became S-21, Pol Pot’s most terrifying prison, is packed with tragic mementos and photographic evidence of the horrors that took place within.

A three-hour khmer architecture tour is a great way to discover Phnom Penh’s – often very difficult to find- architectural gems. Run by non-profit group KA Tours, you’ll be chauffeured around in a pedal-powered cyclo to discover icons of the New Khmer style of architecture, which evolved after Cambodia’s independence in 1953. Gems include local architect Vann Molyvann’s striking ‘100 Houses’ development.

After your effortful day, enjoy an outstandingly good Shiatsu massage at Seeing Hands (12 Eo Street 13) near Wat Phnom, where all the professionally-trained staff are blind.

After a day of heat and dust, new kids in town will want to cool off at the Foreign Correspondents Club (363 Sisowath Quay). It might be a tad touristy these days, but ordering a mojito and some French-Khmer fusion food snack in this Graham Greene-style watering hole (complete with leather chairs, ceilng fans, and walls decorated with Al Rockoff war photos) is still THE iconic Phnom Penh experience. If you’re in the mood for some action after your meal, just stroll along the quay and take your pick from the plethora of bars and music venues that stud this lively street.

For dinner, head for the Phsar Reatrey (night market) on the riverfront, where vendors sell grilled crabs, prawns and other delicious Khmer snacks for a song. Once you’ve eaten your fill, grab a tuk-tuk (old hands might prefer to take the cheaper motodop) and make your way over to Sharky’s (130 Street 126), one of best venues in town for live music and a game of pool.  When the music winds up, check out the scene along Street 51, the city’s liveliest club area, only a few minutes away.