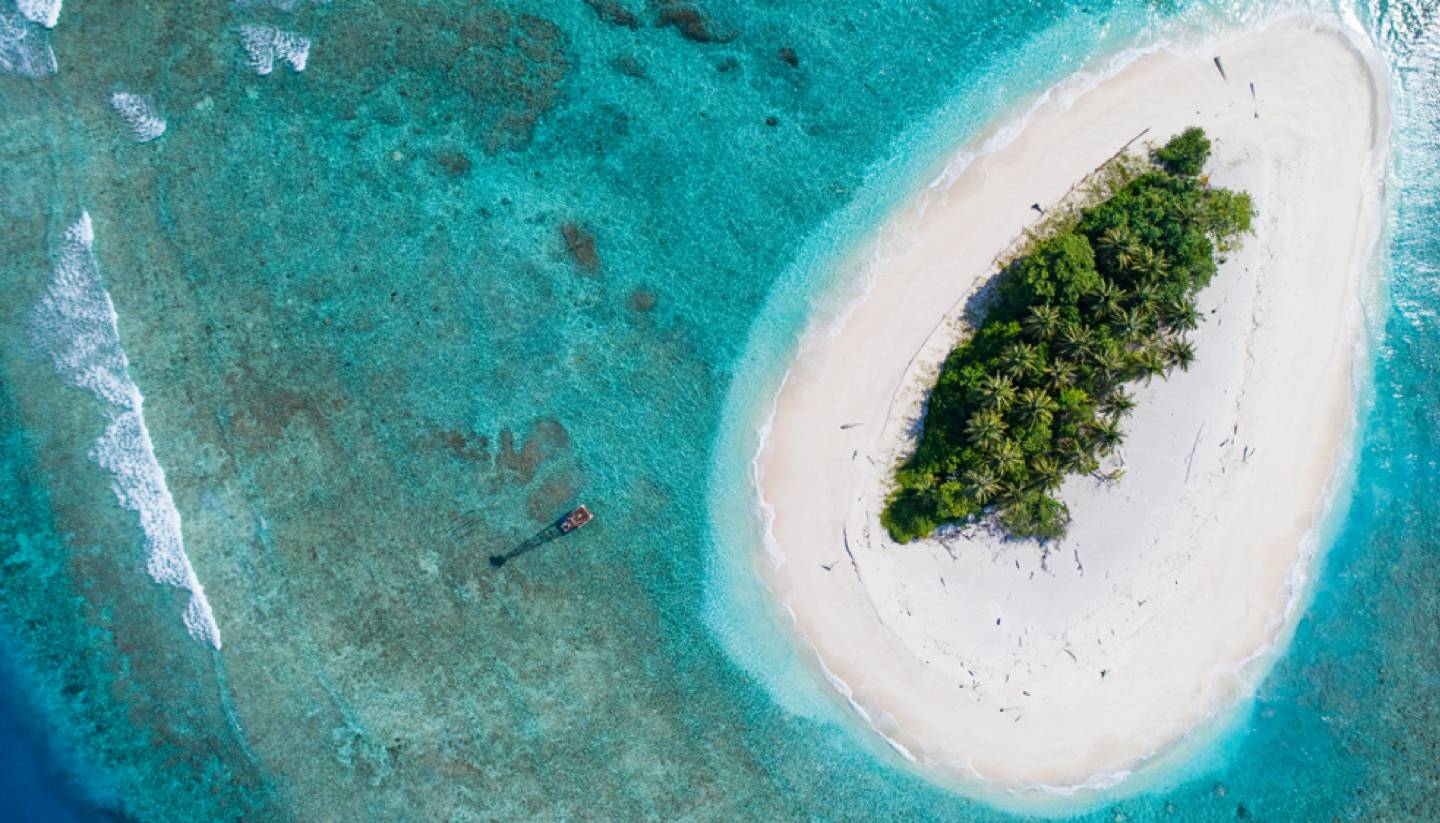 Far from just Hollywood fantasy, people have been stranded on desert islands with some living to tell the tale

The idea of having to survive on a desert island after a boat or plane crash seems like something consigned to the pages of Daniel Defoe’s Robinson Crusoe or the scenes in Cast Away featuring Tom Hanks desperately breaking coconuts for water after the cargo plane he was on crashed in the South Pacific.

Despite how unlikely it may seem, people do get stranded on desert islands from time to time. In fact, the character of the colonialist Crusoe was loosely based on the life of an 18th-century Scottish privateer, Alexander Selkirk, who was stranded on an uninhabited island in the South Pacific Ocean for nearly five years. And in 2016, the US coast guard spotted castaways stranded on an island several hundred miles north of Papua New Guinea after their ship capsized.

If you find yourself on a desert island after surviving a boat or plane crash, chances are, you would actively fight for your survival as your instinct for staying alive kicks in. In this article, we aim to share a few useful tips on what you can do to keep yourself fed and safe before help arrives. 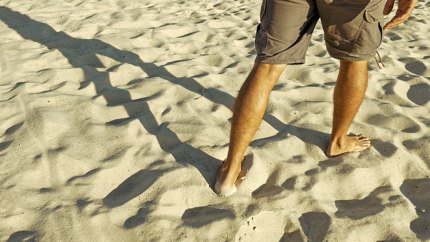 Surviving on a desert island takes wit and wisdom

You would most likely be in a state of shock and panic. But amid fear and helplessness, it is important to remain calm and controlled. Keeping it together will increase your chance of survival.

Look for other survivors and help as much as you can if they are injured. For cuts, control bleeding by using clothes or rags to make pressure bandages. If a person has suffered a broken limb, find a hard object (like a solid piece of wood) as a split to stabilise the bone and use clothes or a belt to stop it from moving at all.

Salvage from the wreckage

If there is wreckage, salvage as many items as you can as there are potential uses later. For examples, blankets and plastic sheets can be used to construct a shelter, bottles or containers for carrying food and water. Most importantly, look for something that can help you start a fire.

Dehydration can kill in as little as three days. Start tracking inland to find a river or a lake, and plants are often a good signifier of a fresh water source being nearby. If you can’t see anything above the surface, try digging around the area. Collecting rainwater is also a smart move.

If you were on an island mostly devoid of plant life, get busy and start making a solar still that can turn salt water into distilled water. Check out this video on how to make a solar still from MythBusters below.

The next essential task is building a shelter. It gives you respite from harsh elements such as extreme sun or rainstorms. A lean-to shelter is simple and practical. To make this, place a sturdy and long branch in between two trees or other natural structures that can support your shelter – but avoid coconut trees as you don’t want coconuts to fall onto you. Place smaller branches at a 45-degree angle as the basis for your roof. Bolster this ‘roof’ by covering these sticks with smaller branches, leaves and foliage.

Grass and leaves can be used for your bedding. If it is possible, consider elevating your sleeping area to minimise the risk of insect or snake bites. 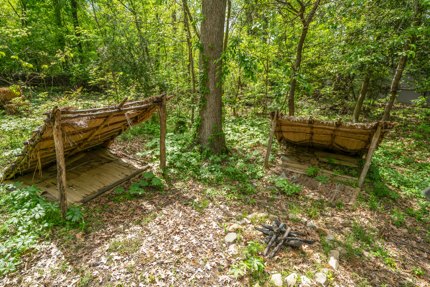 After you’ve dealt with water and shelter, it’s time for another essential: fire. This not only keeps you warm but can help you boil water, cook food and scare off snakes and other predators while you sleep.

If you are without any matches, gather dry leaves, small branches, tinder, anything that is easily flammable. Now take a long piece of wood and try and make an indent or grove in it lengthwise (such as with a stone). Find a thinner hardwood stick and sharpen the end. Rub the sharp end of the hardwood stick against the grove by running it back along the groove. The idea is to create friction and cause the particles of wood between the stick and the groove to smoulder so try and do it as fast and as vigorously as you can. Once the wood particles in the grove start smouldering, bunch them up with the stick and pour them onto the other dry material you have and blow gently to encourage the embers to glow and set the material alight. When the fire is properly alight, place larger pieces of wood into it to keep it going.

Finding food on a desert island is usually fairly straightforward – fish and shellfish in the ocean, crabs in tidal pools, seaweed on the beach, as well as fruits and vegetables inland. To catch fish, you would probably need to create a fishing net or a spear from items you can find on the island or salvage from the wreckage. 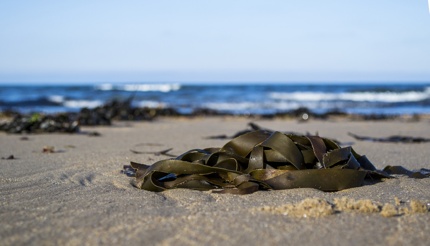 Seaweed on the beach is a food source

In this day and age, it is highly likely that someone knows you are missing and will have alerted the authorities. Search planes, boats, helicopters might have been deployed to try and find you.
Use all the resources that you have on the desert island to create messages that will attract rescuers. Use rocks or pieces of wood to spell out messages such as “HELP” or “SOS” on the beach. Make the letters big so they are clear to anyone passing. Smoke can attract attention too – you can produce a lot of smoke if you burn damp wood.

In the movie Cast Away, Tom Hanks played Chuck, the lone survivor after the cargo plane he was on crashed into the Pacific Ocean. He escaped in an inflatable life-raft and was washed up on a deserted island. After searching for water, food and shelter, he attempted to make a fire and suffered a deep cut on his hand during the process.

In anger, Chuck threw several objects including a volleyball from one of the packages that had been washed ashore. The volleyball bore his bloody handprint and later, Chuck drew a face on the hand print. He named it Wilson and began talking to it. While the movie didn’t explicitly say that Wilson helped to keep Chuck sane, it was clear to viewers that the regular conversations and arguments Chuck had with Wilson kept him alert and clear-minded.

In 2013, Ed Stafford, a British explorer, did a program for the Discovery Channel in which he was dropped off alone on a desert island for 60 days with absolutely nothing except cameras to self-film, a minimum medical kit and an emergency satellite phone in case his life was at risk. Ed used his wit to survive and the program was a huge success. In one of the interviews later, Ed commented that he stayed sane by constructing a small circle of stones on the desert island and retreating to this safe place, letting go of his thoughts whenever he felt overwhelmed.

If you are the sole survivor of a crash or shipwreck on a desert island, keep yourself mentally healthy by talking to an object like Chuck or letting go of thoughts like Ed. You can also choose to stay active, find a pet, keep your focus on a higher being and view what you are going through as a test.

Food, how to tell if they are edible

Fish, shellfish, seaweed, along with wild fruits and vegetables will be your diet if you are stranded on a desert island.

Seaweed is widely considered to be the safest food to forage and eat as there aren’t any deadly seaweeds, according to npr.org. But beware that although some seaweed like acid kelp may not kill you instantly, it can cause intestinal distress, so always test it with a tiny amount first.

When it comes to shellfish, only stick to common ones like shrimps, clams, cockles, oysters and mussels that you know are safe to eat. Cook them thoroughly to reduce the risk of food poisoning. Also, discard any shellfish that you can’t open easily after it has been cooked.

If the desert island does not have fruit and vegetables that are familiar to you, you should only consider doing a DIY test to determine its toxicity if you are desperate and there is no alternative. The test involves you rubbing the fruit or leaf against the back of your hand, and wait to see if it has caused any reaction to the skin. If there has been no reaction, carefully push it against your upper lip and wait for a reaction. The next step will see you run it against your tongue to see there is a reaction. If you haven’t had a reaction so far, try to consume a tiny amount. Bear in mind this test is not foolproof. Poison Hemlock, for instance, may not cause any skin irritation but ingesting just a small amount can be fatal. 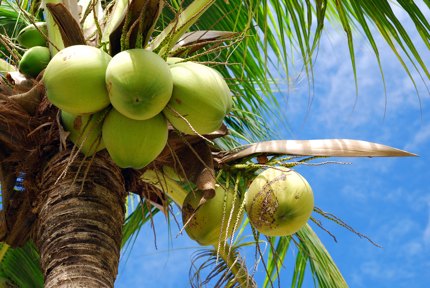 Coconuts will keep you hydrated