A dispatch from the Haggis Hurling Championships 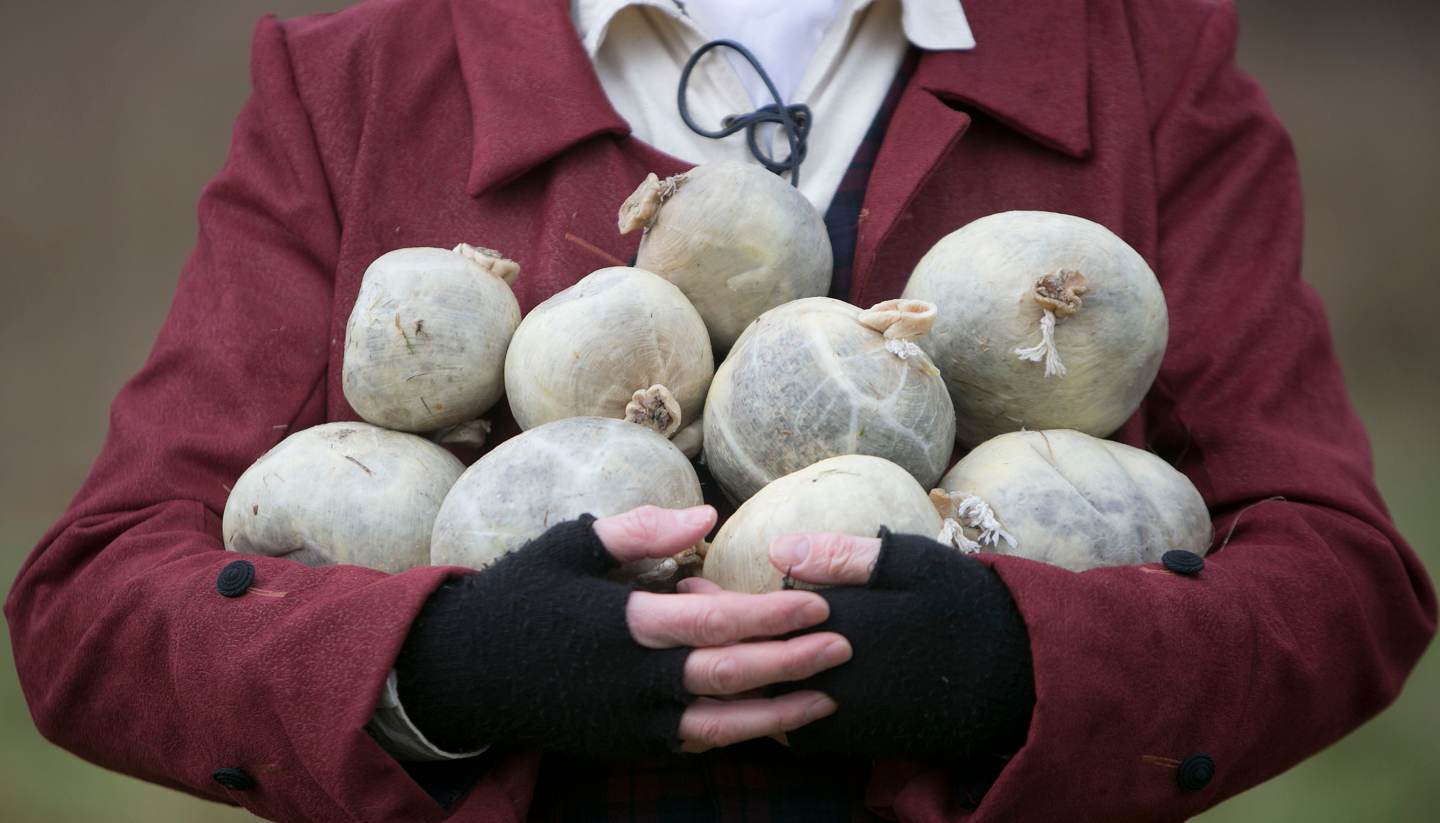 David Hillier heads to Robert Burns' cottage in Alloway, South Ayrshire to take part in one of the UK's weirdest sports – haggis hurling.

So begins Robert Burns’ Address To A Haggis, the bard’s ode to the Scottish national dish of sheep’s heart, liver and lungs, flavoured with oatmeal, onion, suet and spice, all encased in a sheep’s stomach. It’s still recited before every Burns Supper.

When the poem was originally published in the Caledonian Mercury in 1786, not even Rabbie himself could envisage this: kinsmen lining up against a man from Kent to lob the ‘Great chieftain o the puddin’-race’ across his backyard.

Yet, here I am, stood upon an overturned whisky barrel just metres from the cottage where wee Rabbie was born and raised. I’m taking part in the World Haggis Hurling Championships, rolling a rather hefty haggis from right to left, trying to dry it betwixt jumper and jacket.

A carpet of damp grass, bush and stone lies before me, and perhaps even a slice of history: an opportunity to plough a little bit of Kent into these fields of proudest Ayrshire.

Unfortunately, my throw is unlikely to make either county or poet toast my name.

I take another haggis – that is, another chance – and step up to the barrel again.

I bow down and encounter Garry McClay. Garry, 24, is from Kilmarnock just up the road and is last year’s champion. Then he threw 56m (183ft), a distance that beat the old world record set by Alan Pettigrew in 1984.

Organisers of the competition have to set up a separate whisky barrel for Garry, some 18m (60ft) behind everyone else.

Garry was keen for Coltart to come down for a showdown, but was left with the likes of me and purse-wielding grandmas for honest competition.

He laughs off any suggestion that he’s been training for today, though you sense he’d like a proper challenge: not unreasonable when you consider that around 70% of the 228 competitors this year are pre-teen, giving proceedings a cackle-packed, family atmosphere.

It’s pretty safe to say that no-one, certainly not Garry, is taking things too seriously (though he looks particularly pleased with his 60m (190ft) third throw).

This slightly casual attitude is probably a good thing as the history of the competition is rooted in a curiously uplifting story of farce.

Haggis hurling didn’t originate from the wives of peat bog workers, as first thought. In fact there’s no evidence to show they flung food across fields and fen for their men to catch in their kilts.

No, back in 1977, Robert Dunseath and his mates placed a newspaper advert calling for competitors to revive the ancient sport of haggis hurling.

Inundated with interest, they proceeded to invent the sport and a little history for it. It wasn’t until 2004 that Dunseath owned up to what he calls an ‘exercise in gullibility’.

Fortunately, any accusations of skulduggery were batted away as all profits were given to charity.

But nearly 40 years on, the sport thrives in the arms of good Ayrshire folk, and you can’t help but think that Rabbie Burns (a man of this county if ever there was one) would have cheered on every single throw.

Getting there
All major operators fly to Glasgow International. From there, take a ScotRail train (www.scotrail.co.uk) to Glasgow Prestwick where it’s a 20-minute taxi journey to Alloway.

Alternatively, Virgin Trains (www.virgintrains.co.uk) run to Glasgow Central where there are regular trains to Ayr. Alloway is a five-minute cab journey from the train station.

More information
Check out the Robert Burns Birthplace Museum (www.burnsmuseum.org.uk) or the Alloway 1759 Festival website (alloway1759.com). For more information on Scotland’s Year of Food and Drink head to www.visitscotland.com.

Equipped with just a snorkel and flippers, mad-cap, mud-covered swimmers attempt to cut through 60 yards of water-filled peat bog in the quickest time possible. The caveat here is that entrants are prohibited from using swimming strokes and must rely solely on flipper power. Like all good ideas, the sport was dreamed up in a local pub in Llanwrtyd Wells, Wales where it has taken place since 1985.

Where? Llanwrtyd Wells, Wales
When? August

One woman’s tardy timekeeping became something of a sporting outing in Buckinghamshire. The story goes that an Olney lady was making pancakes when she heard the church’s shriving bell for Shrove Tuesday. Running late, she rushed to the service with her frying pan still in hand. Since then, locals have geared up in aprons and hats and raced to the church with their frying pans. The winner is the first person to toss their pancake three times, rush to the church and get a kiss from the cheeky bell ringer.

Where? Olney, Buckinghamshire
When? February

Face Gurning is a beauty contest of sorts, originating from Egremont, Cumbria in 1267. Winners aren’t chosen for their good looks though, rather their bad, as they try to distort their face as much as possible. Known as ‘gurnin’ through a braffin’, contestants muster a pose and put their head through a horse collar (braffin) to be judged. World championship winner, Peter Jackman, went further still and had his teeth removed for ultimate face distortion.

Where? Egremont, Cumbria
When? September

Nothing screams manliness like wrestling in a pool of warm, meaty gravy. What started a decade ago in a Lancashire pub has now become the annual World Gravy Wrestling Championship – a contest where strength doesn’t win you medals, but entertainment value does. Both men and women slop around in more than 1,500 litres of gravy during the two-minute matches with all the proceeds going to charity.

Where? Stacksteads, Lancashire
When? August

With half an hour on the clock and a 3-sq-m (32-sq-ft) plot of land to cover, contestants at the World Worm Charming Championships have to coax worms out of the ground using vibrations alone. Digging and drugs (read: water) are prohibited, so entrants sing, play music and shake garden forks to encourage them out. At the first event in 1980, Tom Shufflebotham charmed 511 worms out of the ground and the competition has been held in Nantwich, Cheshire ever since.

Where? Nantwich, Cheshire
When? June