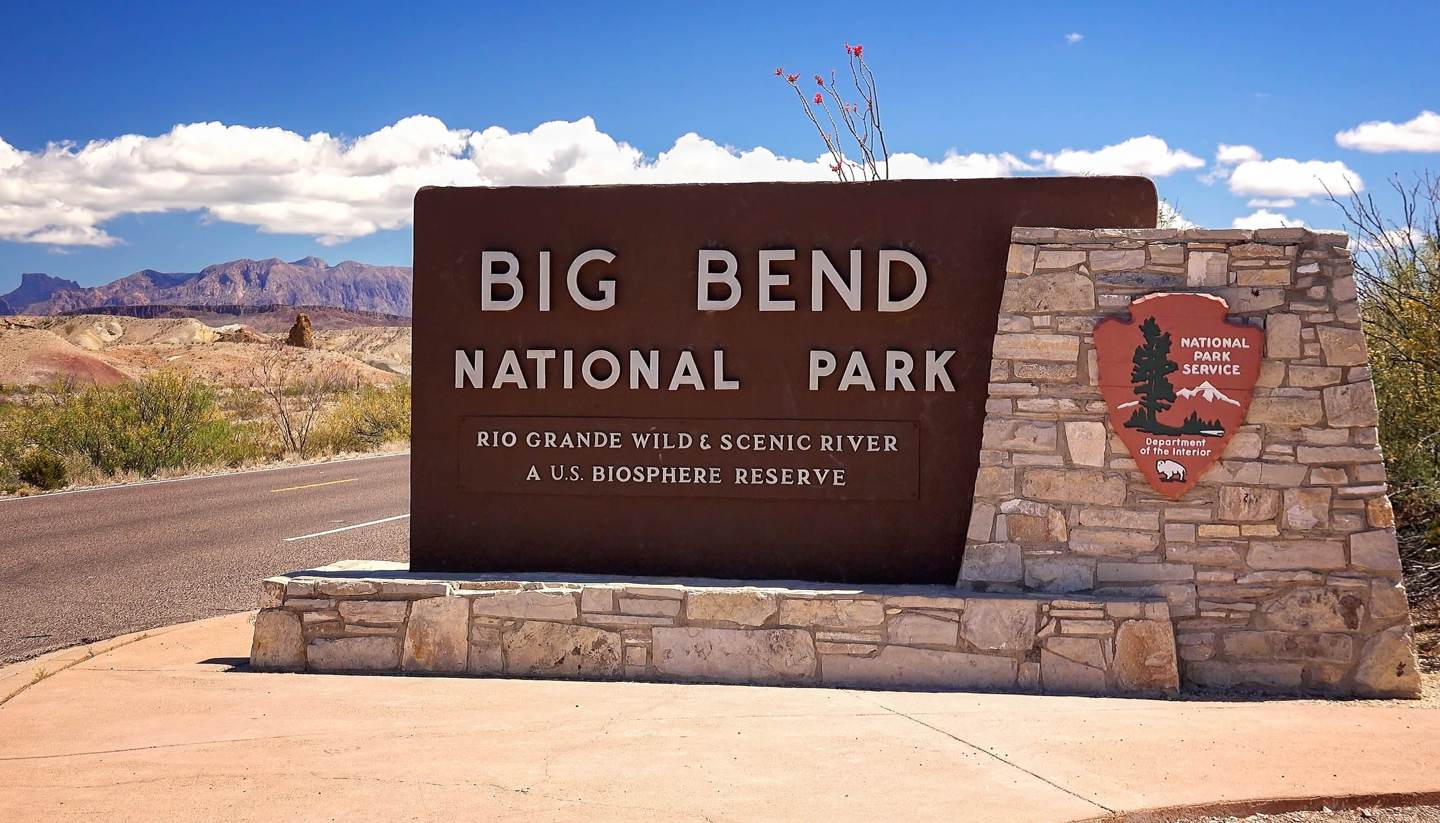 It’s not easy to get to, but once you’re there, you’ll be transfixed by its beauty. Matt Kirouac discovers the delights of the Big Bend National Park

Unlike other popular National Parks, Big Bend National Park is a place that embodies the notion of “hidden gem.” Four-plus hours Southeast of El Paso in West Texas, it’s a place you have to really work to get to, but once you arrive at this sprawling expansive of mountains, rivers, canyons and desert, you’ll realise it’s well worth the haul. 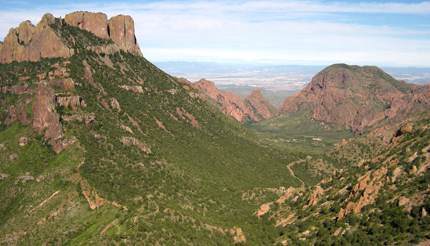 Though the drive to Big Bend is long, there’s no shortage of eye candy along the way; especially if you stop in the quirky town of Marfa. We arrived after dusk, so the funky locale was sleepier than usual, but it’s still got cool bars and restaurants to check out, like Planet Marfa’s beer garden, complete with subterranean teepee, or the popular Pizza Foundation in a refurbished garage. 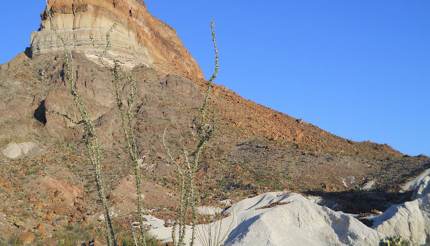 From Marfa, we carried on through Texas’ pitch blackness. Our destination was a middle-of-nowhere lodge called Corazon Vista, hidden away on Terlingua Ranch. The road narrows, shifting from pavement to dirt as we veer several miles off the highway to find it. Arriving at midnight was a bit frightening, especially since once we got there, we realised its neighbour is an eerie church that looks like something out of a Quentin Tarantino film. But it was all worthwhile, especially come morning when we could lounge in the porch hammock and watch javelinas mosey by. This is authentic West Texas, entrenched in solitude, overlooking a sun-soaked expanse. It’s an appetiser before the main course that is Big Bend National Park. 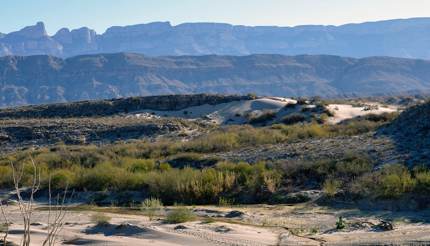 Entering Big Bend reminds me of Jurassic Park, when the scientists drive through those massive doors into a world of unknown. But instead of dinosaurs, it’s roadrunners, black bears and jackrabbits. Clocking in at 1,252 square miles, this place is mammoth, filled with sights, an ever-changing river and the glorious Chisos Mountains. The Lost Mine Trail is a good start; a three-mile jaunt that affords some seriously awe-inspiring views. It’s filled with wildlife too, which can be both exciting and nerve-racking. A ranger told us that if we saw a black bear (which he said was likely and which proved correct), we should throw twigs and shout “Get outta here!” When a bear did cross our path, we all just froze solid and didn’t do anything. Turns out that works too. When I asked the ranger about mountain lions, he said, “Oh they’ll be watching you, but you won’t see them.” Comforting. At any rate, the trail is breathtaking, lush with green brush and roving pathways with ample shade. 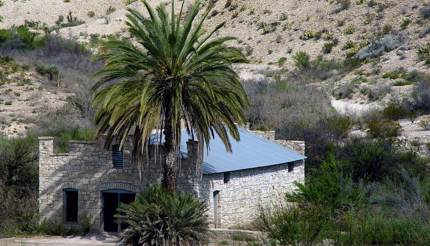 On the other end of the spectrum, a raft ride down the Rio Grande makes for a tranquil afternoon (since white water usually isn’t a thing here). There are several companies in the area that provide rafts, like Big Bend River Tours and Far Flung, so there’s no shortage of options. For our half-day float, they drove us to a launching point and we drifted downriver for a few hours. In lieu of rapids, there’s plenty to gawk at as we floated through canyons and along mountains. The Rio Grande being the border between the U.S. and Mexico, this also meant that we were technically drifting in and out of the country—kinda neat. 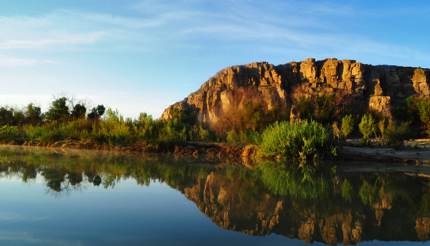 An absolute essential in Big Bend is Santa Elena Canyon. When we were there in October, the Rio Grande had only recently subsided, meaning there was still lots of mud and residual water blocking the entry to the canyon. But we didn’t drive all this way just to look at it. Equipped with water shoes and determination, we sludged through sticky mud and waste-deep water in order to scurry up the other side. One friend sunk into mud up to her thighs, but we were steadfast. Passersby were watching and rooting us on, but mostly just looking to see if we would get stuck and fall in the river. The trail was worth the effort. It starts by ascending from the river before disappearing into the mercifully shaded canyon and meandering between steep limestone walls and the quiet, slow moving river. There’s tons of water plants and barely any noise, giving it a zen-like ambience. It also helped that we were the only ones there, since everyone else is apparently too intimidated by quicksand-like mud. 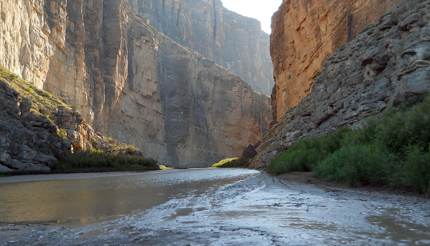 From here, we drove to the Hot Springs Trail, which may or may not have been a bad idea on a 90-degree day with air as thick as chilli. It’s located off an unassuming trail accessed via a scary-narrow dirt road. The trail itself is a short hike, but most just walk to the hot springs, nestled between reeds and trees along the Rio Grande, to relax. On a sweltering day, it’s nice to sit on the edge and dip one foot in the hot water and one on the other side in the cooling Rio Grande. 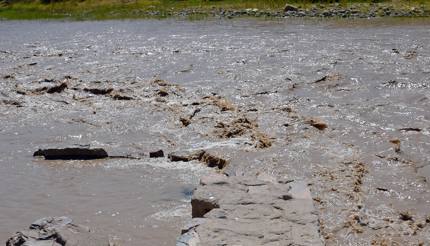 It’s easy to spend days in Big Bend. Removed from civilization and urban sprawl, it’s untouched by humanity. For further proof, just look above you; the stars shine brighter than just about anywhere, as Big Bend’s solitude means it has the least light pollution of any National Park in the lower 48 states. Whether you’re atop a mountain or sloshing through the Rio Grande, it’s a park that makes it abundantly clear how unique and beautiful West Texas really is. 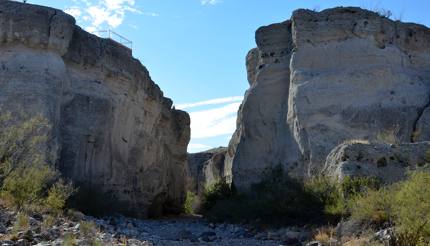 Terlingua Ghost Town: Don’t be too unnerved by the name; the Terlingua Ghost Town is a pleasant, welcoming throwback to the thriving mining era. Nowadays, it’s a peaceful enclave of motel-style rooms, cottages and other lodging options of varying size and shape, each with colourful character.

Candelilla Cafe: Located on the gorgeous grounds of the Lajitas Golf Resort, south of Big Bend along the Rio Grande, Candelilla Cafe takes a more upscale approach to Mexican food and drink. Sit on the patio to see and possibly pet Lajitas’ goat mayor. He’s an actual goat and he loves beer.

Hiking: The main activity in Big Bend National Park, there are hiking trails in each and every corner of the park. The abundance of options means each trails affords different sights, lengths and difficulty levels.

Stargazing: With the least light pollution of any National Park in the lower 48 states, Big Bend is a great place to be outside at night, gawking upwards at the star-filled sky.