Which Greek islands are for you? 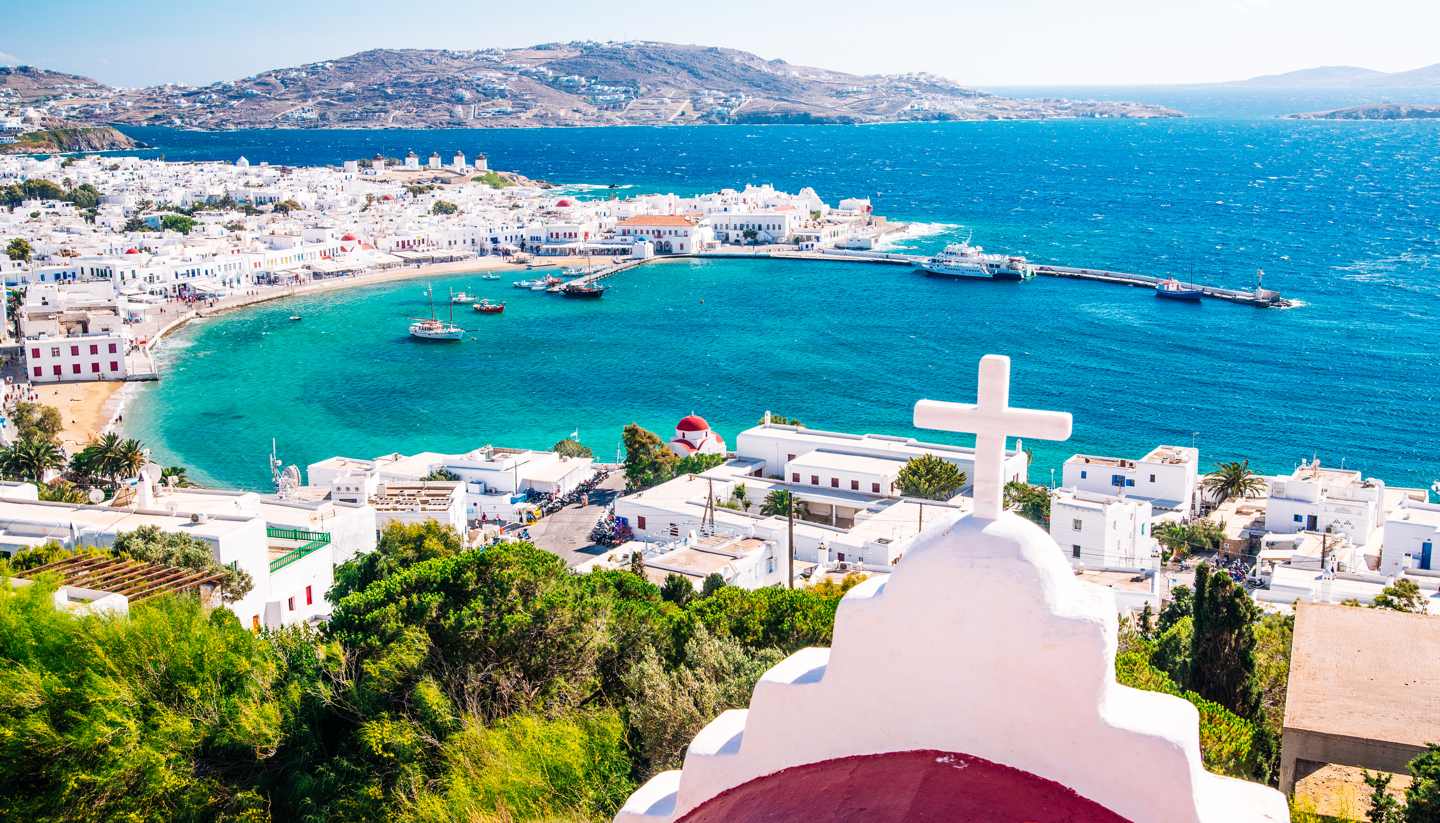 The Greek islands have it all - culture, clubbing, walking and water sports. The hardest thing is to choose which one to visit

To the untrained eye, the Greek islands’ pristine golden bays, endless olive groves and steep cliffs dotted with precariously perched whitewashed villages may seem interchangeable, but island hoppers who have had the chance to explore these sparkling isles know better.

Which Greek islands are for you?

Striking out on their own, the Dodecanese islands are furthest from the Greek mainland. Nearer Turkey than Greece, the islands are rich in history, boasting Byzantine and medieval architecture.

The most popular, and largest, of the islands is Rhodes, whose historic charms include the tombstones of St John’s crusading knights. The UNESCO-listed Medieval Old Town has the famous Ippoton Street (Avenue of the Knights) that leads to The Palace of the Gran Master of the Knights of Rhodes, a stunning example of gothic architecture which now houses a museum. If you aren’t into culture, but happy hours and clubbing till sunrise are more your thing, follow Rhodes’ young party crowd to Faliraki, or jump on a ferry to Kos. 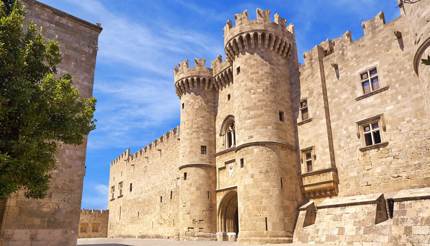 Other islands nearby are: 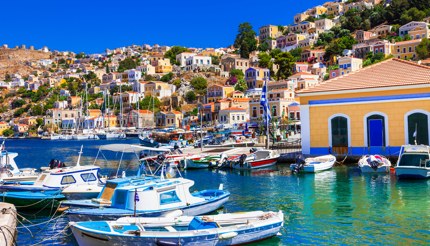 The Cyclades are chiefly responsible for both sides of the Greek islands’ reputation, from sugar-cube villages and bright-blue-domed churches hovering over a turquoise sea to pavements heaving with sunburnt tourists.

The western Cyclades live up to every paradisiacal image of the Greek archipelagos you’ve ever laid eyes on. Milos’ lunar landscape is an unexpected treat, and Kea has one of the best systems of walking trails in the Greek isles. Only 90 minutes from Athens, Andros is popular with weekending Athenians, and perhaps a little one-dimensional as a result, but nevertheless a good base for exploring both the mainland and the Cyclades. 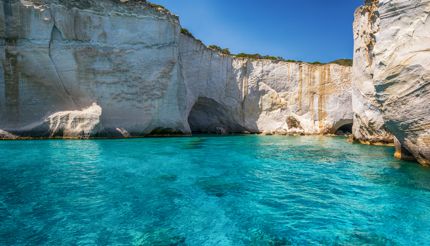 What the Ionians may lack in quaint villages (many were wiped out by an earthquake in 1953), they make up for in sheer magnificence. Nestled close to Greece’s western coast, the islands are all sheer cliffs, olive groves and silky sweeps of beach.

Corfu and Zante are two popular islands, though the bleached seas and white sands of Kefalonia are fast becoming a hot tourist hub too.

Corfu is a leading cultural destination and home to two outstanding museums: The Museum of Asian Art of Corfu and the Byzantine Museum of Antivouniotissa. On the southern tip of the island lies Kavos which is famous for late-night parties. The varied landscapes of Zante (its shipwreck beach is a must-see), tiny Ithaca and Paxos, bustling Lefkada and Kythira, the rumoured birthplace of Aphrodite, are all worth a visit, and the relative proximity of the islands to each other make an island-hopping holiday irresistible. 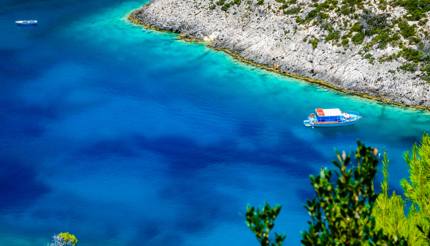 Like the Dodecanese, the Northeastern Aegean islands are geographically closer to Turkey than to mainland Greece but are no less ‘authentically’ Greek as a result. Characterised by mountains, clouds of pine-tree forests and the gorgeous sandy beaches we’ve come to expect of the Greek islands, this archipelago is relatively untouched by the tourist hordes that crowd the Dodecanese and Cyclades archipelagos.

Lusher than the other, rockier archipelagos, the islands range from the popular Samos, Lesvos and Thassos to tranquil Limnos, mountainous Samothraki and stubborn Ikaria, which rather endearingly refuses to pander to the demands of unthinking tourists. 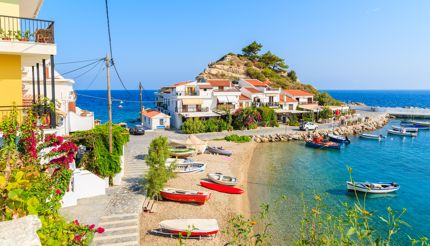 While Crete and Evia are both beach-laden and beautiful, the largest pair of Greek islands are anything but identical twins.

Lesser-known Evia, dotted with pretty villages and lined with attractive coastal resorts, is in such close proximity to mainland Greece (it even has a connecting iron bridge) that it’s often not thought of as an island at all. As well as attractive stretches of coastline and a soft fertile backdrop, Evia’s shining glory is its collection of natural spas, a top activity with those who like their pampering the natural way. Big brother Crete, a popular holiday spot with tourists from around the globe, is far livelier in comparison, with the capital city of Iraklio sporting a fun and bustling nature. Interesting archaeological structures, a dramatic mountainous surface and sparkling waters make Crete a holiday hit with young and old. 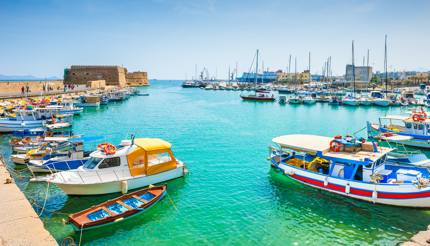 Close to Athens and the port of Piraeus, the Argo-Saronic islands are popular with families and Athenian day-trippers. Don’t snub them just because the multitudes drop in though. Usually, the crowds are there for a reason and the superb beaches and eateries of Aegina, neoclassical buildings and pine-tree forests of Spetses, and car-free status of Hydra lend far more credibility to these sheep-like tendencies than mere convenience could ever do. There’s even a lemon-tree forest on Poros.

While much of the Sporades archipelago is uninhabited, this scattering of 24 islands off Greece’s east coast does offer a clutch of charming destinations for the island-hopper.

There are many quiet moments to be savoured in Alonnisos, a pebble-beached isle carpeted with vineyards, fruit trees and popular with fishermen. For those craving a dose of nightlife then Skiathos is the island of choice, which also has a lively beach scene. There’s more of a traditional feel to be found at Skopelos; while a rocky nature makes much of the coast difficult to access, this pretty island offers plenty of photo-friendly scenery, as the people behind hit film Mamma Mia found.