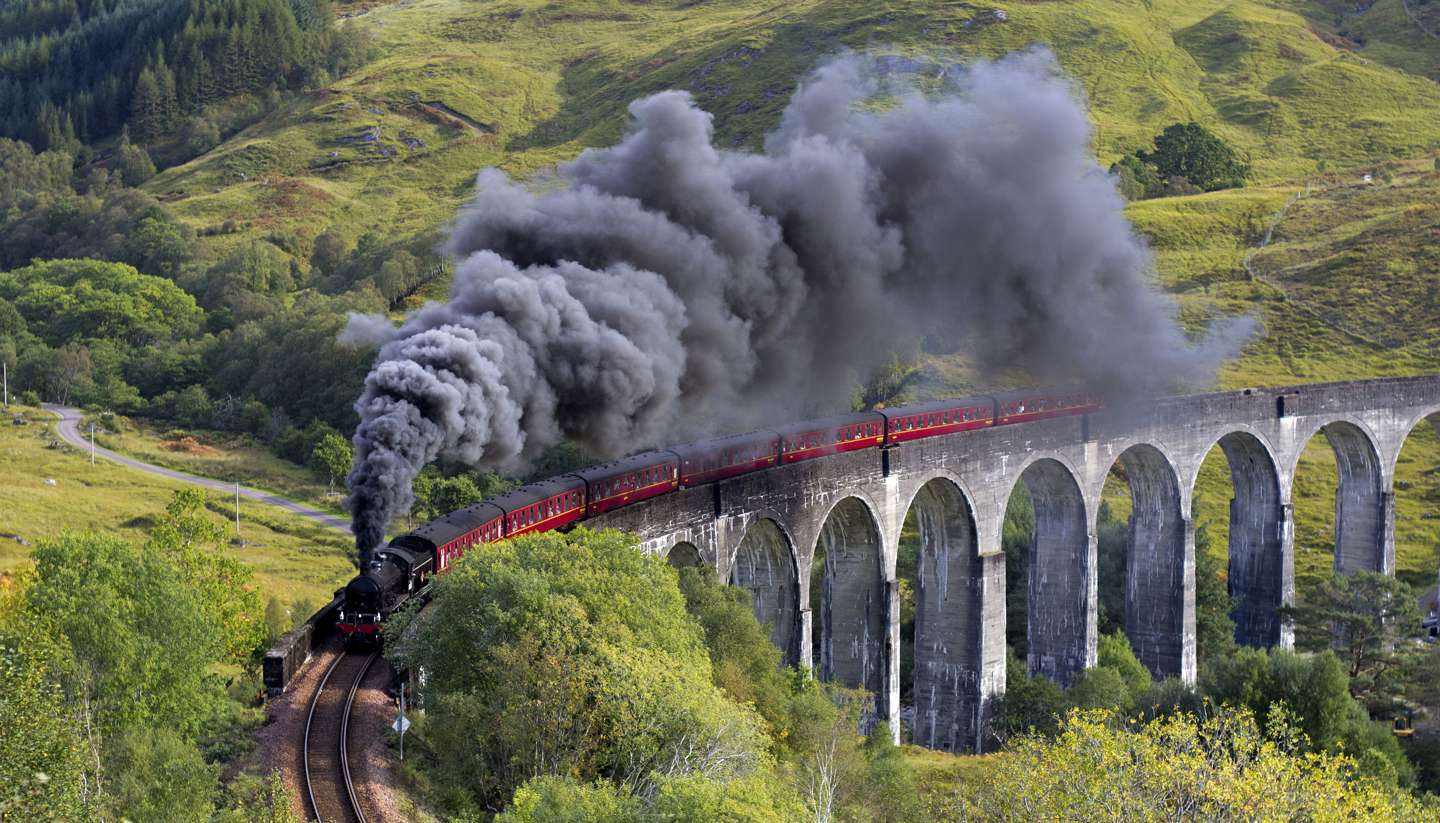 From chugging through the Scottish Highlands, to swooshing along the East Coast of England, here are Britain’s best train rides

Jaded commuters might find it hard to believe, but Britain’s railways were once the envy of the world. And if you want to experience the faded charm of this bygone era, jump aboard one of these classic services.

Fall asleep in London and wake up in the Scottish Highlands. Okay, so the Caledonian Sleeper is not the most scenic of train trips – you don’t get to see much as it scythes through Britain in the dead of night – but this is truly one of the most romantic ways of travelling across the country. Leaving London under the cover of darkness, passengers can enjoy dinner and a few drams in the dining cart, before retiring to their sleeping cabin and waking, 500 miles later, in Fort William, just in time for breakfast.

Journey highlight: Rising early to watch sunrise over the Highlands. That and the whisky.

The inside track: The Caledonian Sleeper runs six nights a week between London Euston and Fort William. 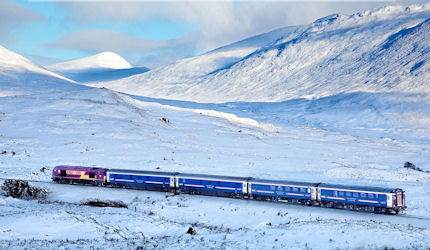 The Caledonian Sleeper scythes through the snow

Hugging the Devonshire coast, the Riviera line is one of the most picturesque railways in Britain. Hop on the train in Exeter and explore the English Riviera, passing through majestic resort towns like Dawlish and Teignmouth. The best part is you can score tickets for as little as £7.80, off-peak day return.

Journey highlight: Watching the surf roll in on Dawlish Beach.

The inside track: Passenger services run daily between Exeter and Paignton. 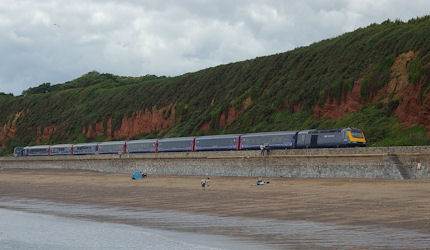 The Settle to Carlisle railway remains one of the most dramatic train lines in England. This scenic, 72-mile (116km) stretch takes passengers through the rugged hills and rolling farmland of West Yorkshire, North Yorkshire and Cumbria. Since its reprieve in 1989 the line has become a popular tourist attraction and welcomes up to 14 passenger services per day. There is also a heritage steam service – for the discerning passenger – which runs throughout the summer.

The inside track: Statesman Rail run steam services between Settle and Carlisle. Alternatively, jump on one of the daily passenger trains. 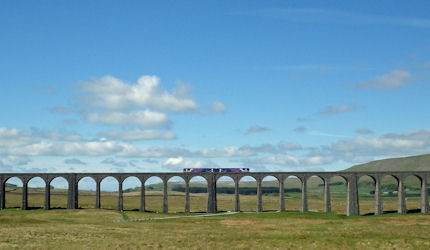 This historic line plays a starring role in the Harry Potter movies and is regarded, by rail anoraks, as the most scenic in all of Europe. They’re probably right. Departing under the watchful gaze of Ben Nevis – Britain’s highest mountain – trains descend from the Highlands to the shimmering lochs and seaside villages of Scotland’s rugged west coast. Passengers can choose from the heritage Jacobite steam train or jump aboard regular Scotrail passenger services.

Journey highlight: The Glenfinnan Viaduct, as featured in the Harry Potter films and on the Scottish £10 note.

The inside track: If you want to make like a wizard then jump aboard The Jacobite, a restored steam service which also featured in the Harry Potter films. 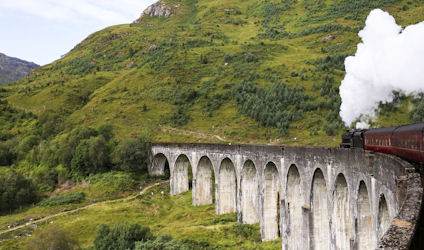 The Fort William to Mallaig train, as seen in Harry Potter

The oldest independent train company in the world, Ffestiniog Railway was founded in 1832 and has been wowing passengers ever since. The steam service between Caernafron and Portmadog covers just 40km (25 miles), but it is a journey of unremitting beauty. Winding through Snowdonia National Park, the railway flirts with the foothills of Snowdon and chugs through pretty Welsh villages, before arriving at the coastal town of Porthmadog. No wonder it’s one of North Wales’ top attractions.

Journey highlight: Pressing your face against the window to gaze at Snowdon.

The inside track: Ffestiniog Railway is open most of the year, but the best time to visit is between April and September.

Sustained by hardworking volunteers and cups of tea, the Whitby to Pickering Railway is one of the oldest routes in the world, built in 1832 by the father of train travel, George Stephenson. Leaving Whitby behind, passengers watch from beautifully restored carriages as the steam train scythes through the picturesque landscapes of North Yorkshire Moors. Labouring up steep gradients, the smell of coal hangs in the air as the locomotive chugs through ancient woodlands, darkened tunnels and beneath the beautiful arches of Victorian viaducts.

Journey highlights: Cream tea at Pickering Station and the opulent interior of the carriages.

The inside track: The Whitby to Pickering line is operated by North Yorkshire Moors Railway, which runs regular services between March and November. 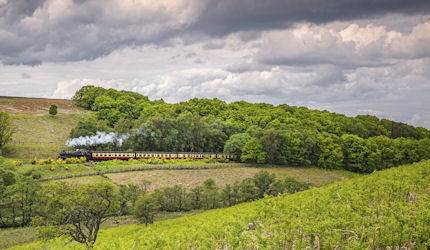 Blink and you’ve missed it. Well, not quite, but high-speed trains servicing this stretch of the East Coast Main Line offer little time to take in the views. Passengers are whisked along cliff tops between Newcastle and Edinburgh in less than 90 minutes, passing remote border towns in a blur as they go.

Journey highlights: Hurtling along the Northumbrian cliff tops and through Berwick-upon-Tweed.

The inside track: Passenger services run regularly throughout the day between Newcastle and Edinburgh. 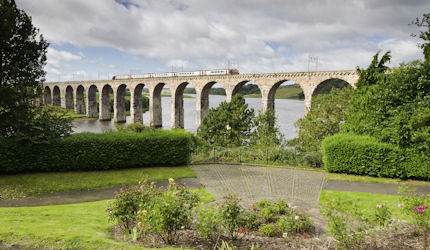