Cambodia: Beyond the temples of Angkor 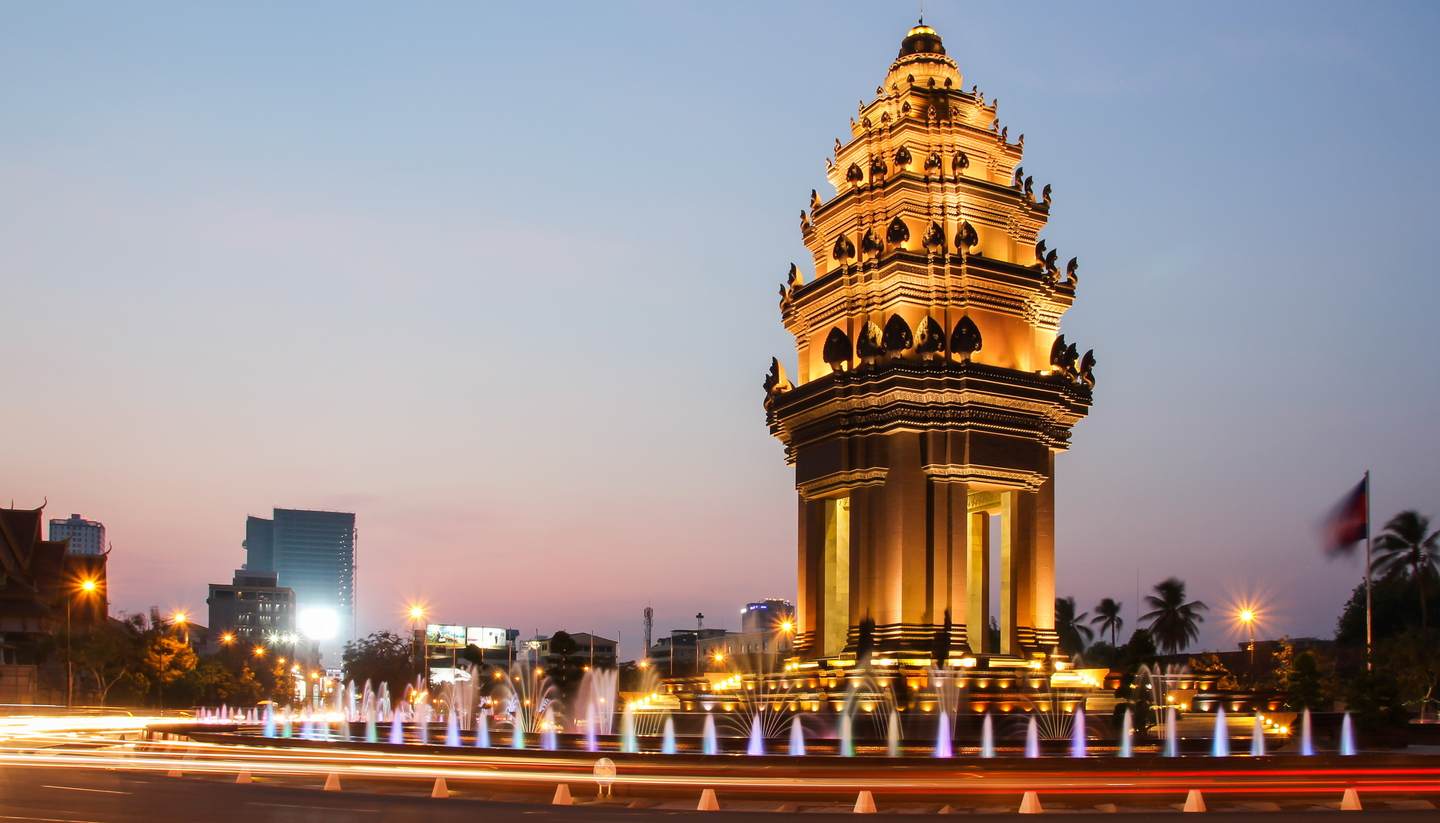 As Cambodia emerges as a mainstream tourist destination, it’s time to look beyond Angkor and explore a few of the hidden gems

As home to the truly incredible Angkor Wat, it’s unsurprising that many tourists overlook the rest of Cambodia. But beyond the haunting ruins of Angkor Wat lie many beautiful, intriguing sights, as this article aims to give you a rundown on the hidden gems.

You haven’t seen Cambodia if you haven’t visited the historical museums of Phnom Penh that detail the country’s dark and difficult past. The bloody tales of Cambodia’s recent history are laid bare with bleak, profound clarity in the Tuol Sleng Genocide Museum. Between 1975 and 1979 the Khmer Rouge massacred nearly 3 million people (about 25% of the population) in the name of extreme Maoist agrarianism under Pol Pot.

The museum began life as an ordinary high school but was turned into Security Prison 21 in 1975. Photographs of the tortured bodies of prisoners are displayed in the same bloodstained rooms the liberating Vietnamese army found them in. Weapons and portrait photographs of the thousands of victims of this brutal revolution are also on show. This is a truly confronting experience, but one that is essential to understand contemporary Cambodia.

About 17km (11 miles) away from Phnom Penh is the Choeung Ek Killing Field, the site of the prison’s extermination camp. The remains of almost 9,000 people have been exhumed from mass graves here and over 5,000 skulls are displayed in the Memorial Stupa. A visit to this site is another harrowing, sobering experience. 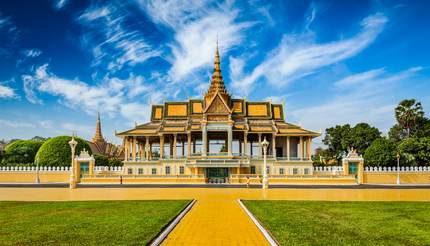 The sweeping beaches and forested mountains of Kampot province provide welcome relief from the hectic energy of Phnom Penh. Kep, Sabay and Nataya are all great spots for relaxing and unwinding. Bokor Hill Station in Preah Monivong National Park is a relic of the French colonial era; and its abandoned buildings include a hotel, casino and church. On clear days the view here stretches across the forest to the coast, while on cloudy days, mist swirls eerily around the station. Nearby, the two-tiered Popokvil Falls are a beautiful sight during the rainy season, however, please note that you cannot swim in the shallow pool.

For a coastal break, you may want to avoid the relatively developed Sihanoukville and head to Kep for spectacular sunsets, a rich history and some of the best seafood in Southeast Asia. Kep, originally an elite French resort, did not fare so well during the Khmer Rouge’s reign. The ruins of French colonial houses and villas are still scattered along the shoreline and may be explored at leisure. While Cambodians have been holidaying here for years, foreign tourists are still less prevalent.

For an idyllic beach experience, make the trip out to Koh Rong, an island located off the coast of Sihanoukville that’s made famous for lush coral reefs and sweeping sandy beaches. Koh Rong is accessible by ferry and has a small selection of bars for you to enjoy while lapping up the salt, sun and surf. If lying lazily in a hammock by the ocean is high on your list, Koh Rong is the place for you. 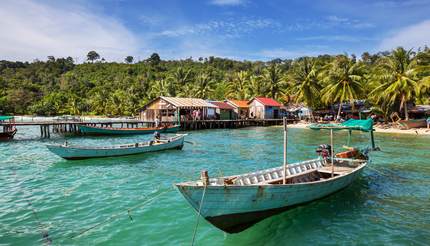 The sleepy riverside town of Kratié (or Kracheh) is home to one of Cambodia’s main attractions to the north of Phnom Penh. Kratié is the best place in Cambodia to see endangered freshwater Irrawaddy dolphins and while thousands of these beautiful creatures used to swim in the Mekong, today, irresponsible fishing and pollution have driven the population down to as low as 80.

The town is defined by a large central marketplace, and it’s worth spending a day or two here in laid-back Kratié to soak up the faded colonial elegance while wandering along the riverfront and sampling local specialities from stalls. Depending on how squeamish you are, it might be wise to steer clear of one of the regional specialities, deep-fried spider. 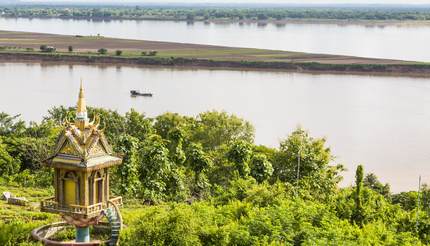 To really get off the beaten track, go trekking in the remote Ratanakiri province, one of Cambodia’s most diverse natural beauties. Expect lush, dense jungle, cascading waterfalls and remote ethnic minority villages in this unique snapshot of authentic Cambodia. The most famous landmark here is Lake Yeak Laom (aka Boeng Yeak Laom), where crystal clear waters fill the volcanic lake’s cavity and are superb for swimming. 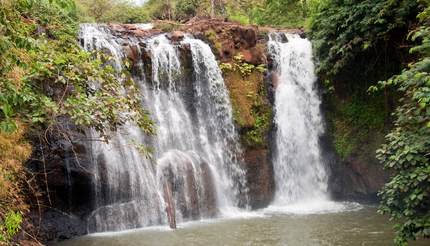 Home to some of the best food in Cambodia and with a balanced mix of eclectic, trendy boutiques and cafes amid the lush surrounding countryside, Battambang, a city on the Sangkae River, is a different Cambodia to the rest. Whether it’s the innovative blend of Khmer, French and Western cuisine that reels you in, the distinct lack of tourist traffic or the calmness created by an absence of local touts, Battambang should not be left off any alternative Cambodian itinerary. 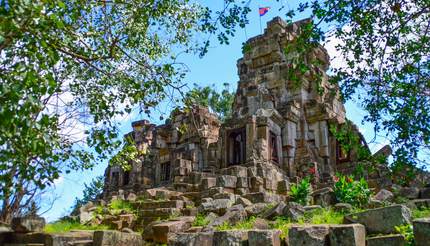 Kompong Luong, one of the most unique attractions in Cambodia, is a floating village complete with restaurants, schools, police stations, temples and karaoke bars, and home to 10,000 inhabitants and drifts on the southern edge of Tonlé Sap Lake. The exact location of the village depends on the season and currents and is a fantastic place to people-watch with a beer in a floating bar. 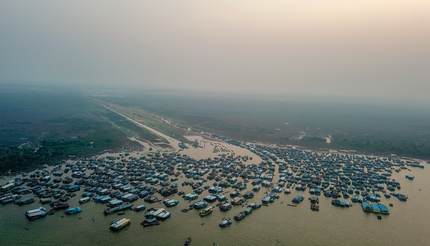 For many tourists, Siem Reap represents nothing more than the gateway to Angkor Way and its magnificent ruins, however, it’s also home to some of Cambodia’s most sublime national parks and temples. Phnom Kulen National Park boasts magnificent cascading waterfalls and is a breathtaking insight into Cambodia’s mountain ranges. Here you’ll be able to find the relaxed ‘reclining Buddha’ at Preah Ang Thom protecting the area, as well as some of the best rainforest jungle in the country. Don’t miss this attraction in the wet season, as the surrounding waters are considered to be holy, with many locals of the opinion that they have medicinal qualities. 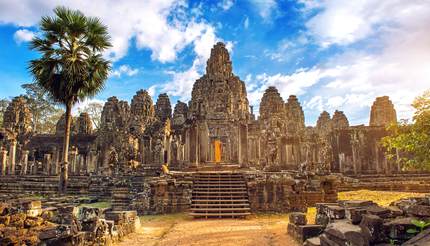