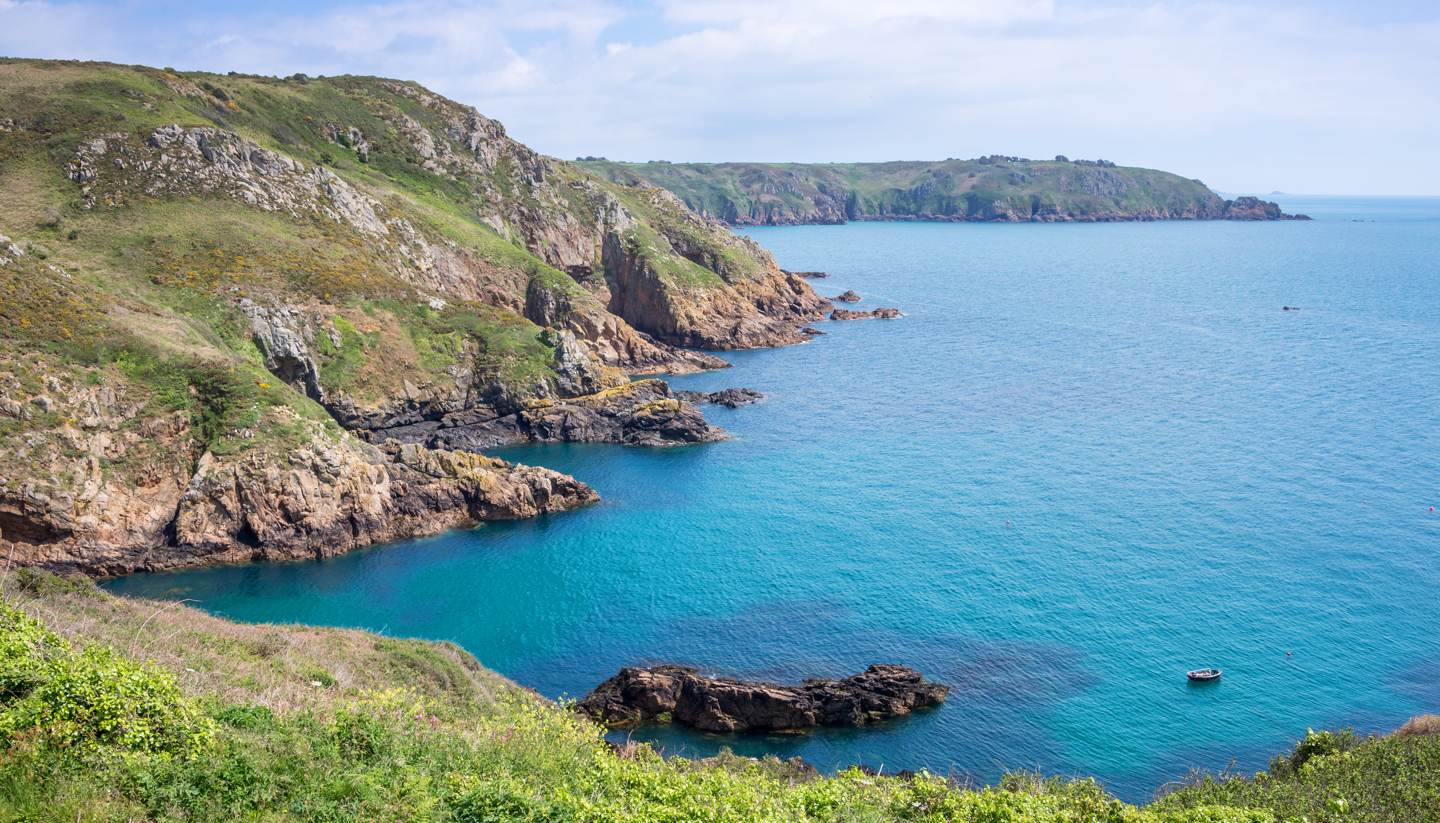 Guernsey, a member of the British Isles but separate from the United Kingdom, is a mere hop away from the UK mainland. Islands that are rich in history and culture normally don’t get kids excited, but things are different in Guernsey. With crumbling castles and bewitching tales of witches and werewolves, Guernsey has many local legends that take inspiration from the ancient landscape, which may in turn delight every member of your family, especially the young ones.

Best of all, it is near to the UK and France, so you don’t have to worry about the constant cries of “are we there yet?” 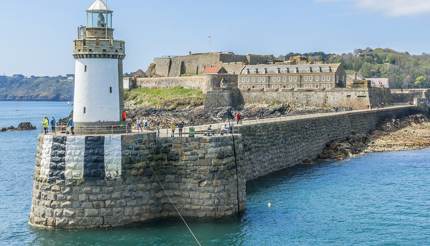 Being small and with low duty on petrol, car rental is popular with visitors. Parking is mostly free but there are some designated ‘disc zones’ that will impose time restrictions (a hefty fine if you go over the limit). While the island is easy to drive around, bear in mind most roads are narrow and also used by cyclists, tractors and horses. Also, the speed limit in most areas is 56 kph (35mph), while in and around St Peter Port it is 40kph (25mph).
Public transport is good value as well – if you choose to hop on one of the green and yellow buses, a journey to any stop on the line will cost you a mere 60p.

Guernsey has a wide range of accommodation choices so there is something to suit every budget, from sophisticated hotels and spas to friendly guest houses, self-catering cottages and campsites.

St Peter Port doubles as both the capital of Guernsey and the main port of the island, rising majestically from its picturesque harbour to keep a protective eye on Guernsey’s sister islands of Sark, Herm and Jethou.

Blessed with the most sheltered anchorage in the Channel Islands, St Peter Port has been a haven and harbour for over 2,000 years. Today, it is home to a high proportion of international banks, as Guernsey is now a well-developed offshore financial centre.

Stroll through the streets of St Peter Port to find a wealth of independent retailers offering everything from antiques to clothes and jewellery. Many goods are also surprisingly affordable thanks to low excise duty rates. 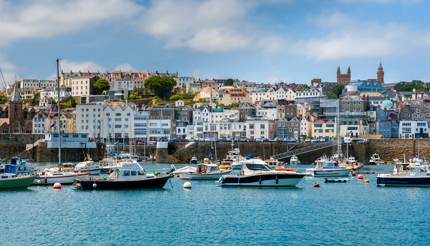 Fun for all ages

Guernsey is proof that you don’t need theme parks to keep children entertained. It boasts some excellent indoor and outdoor play areas, family parks, and year-round activities.
For starters, there is Saumarez Park, the largest public park on the island, which comes complete with a well-equipped children’s adventure playground and bouncy castle, as well as a duck pond, rose garden and tea room. Wildlife enthusiasts shouldn’t miss the adjacent Saumarez Nature Trail with its richly carpeted wildflower woods, banana trees, birdsong and butterflies.

You can also step back in time with a visit to the Guernsey Folk and Costume Museum situated at Saumarez Park. The children may see just how lucky they are nowadays when they visit the Victorian schoolrooms, playroom, wash house, dairy and plough room, which all depict life as it used to be on the island around 100 years ago.

Another attraction which always proves popular with youngsters is the shipwreck museum at Fort Grey, known locally as the ‘Cup and Saucer’ because of its shape. It tells the story of the island’s numerous shipwrecks, displaying salvaged artefacts including cutlery, candlesticks and crockery from the SS Yorouba which broke apart on the rocks in 1888. The nearby sands provide the opportunity to go rock-pooling, paddling or beachcombing.

Folklore is bred into Guernsey, and its history shaped by the presence of fairies, witches, werewolves and other supernatural beings. It is not hard to see why either, since for most Guernsey residents these are not just legends, but ways of life. One particular spot is known as Le Variouf – the werewolf – named after the furred beasts that were said to roam the streets at night, although others insist that it was a legend spread by smugglers to hide their nightly activities.

Other places offer more physical evidence. Le Creux ès Faies is a Neolithic passage tomb dating back to around 3,000 BCE. It is affectionately referred to as the entrance to the Fairy Kingdom, the underground world that they came from. Alternatively, you can visit the Table des Pions, a large arrangement of rocks known locally as the fairy ring. It is said that if you walk around the ring three times and make a wish, then it will come true.

If you’re feeling a little more adventurous, take a trip to Lihou Island. Accessible only by a causeway when the tide is low, it is home to an ancient, ruined pagan priory, and is a protected area thanks to the seabirds that nest there. Many legends swirl around Lihou, and tales of dark magic and devil worship were fuelled by the discovery of 15 skeletons underneath the priory, as well as evidence of a mysterious cult.

A must-see is the Little Chapel, a charming creation of the Benedictine monk, Brother Deodat Antoine. He re-created a scale model of Our Lady of Lourdes in Massabielle and painstakingly encrusted it in thousands of pebbles, seashells and colourful pieces of broken china. Inside, there is only space for a priest and perhaps five people, making it one of the smallest functioning chapels in the world. 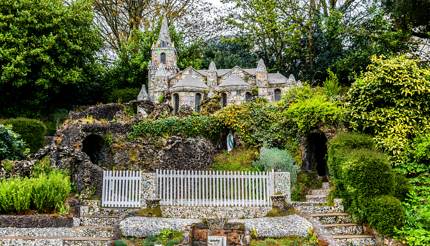 ‘Bean jar’ is a deliciously more-ish bean stew that you shouldn’t even think about leaving Guernsey without sampling. ‘Gâche’ – pronounced ‘gosh’ – is the island’s famous fruit loaf, traditionally eaten smothered with rich golden Guernsey butter. And just in case your sweet tooth isn’t truly satisfied, Gâche melee is an alluringly thick local apple cake that comes hot with a dollop of cinnamon ice cream. Oh, and don’t forget to grab a big bowl of moules – mussels – while you’re here, as they’re some of the freshest you’ll find anywhere.

Alternatively, plan your trip to coincide with Tennerfest held every October. This is an island-wide, six-week-long food extravaganza. During this time, more than 50 of the island’s restaurants compete to come up with the best fixed-price menus that they can put together. It is the perfect time to experience fresh dishes from the island’s top chefs.

Take a day out to pop across to neighbouring Sark or Herm by boat. Both islands are only a short distance away, and share a long and mysterious history thanks to the pirates that inhabited the otherwise abandoned land. Like modern-day sirens, they used lights to lure sailors onto the rocks, plundering the shipwrecks. Even today, the islands hold an air of haunting mystery, only accentuated by the Neolithic structures and unspoilt wilderness that covers them.

Before you go, take a look at: