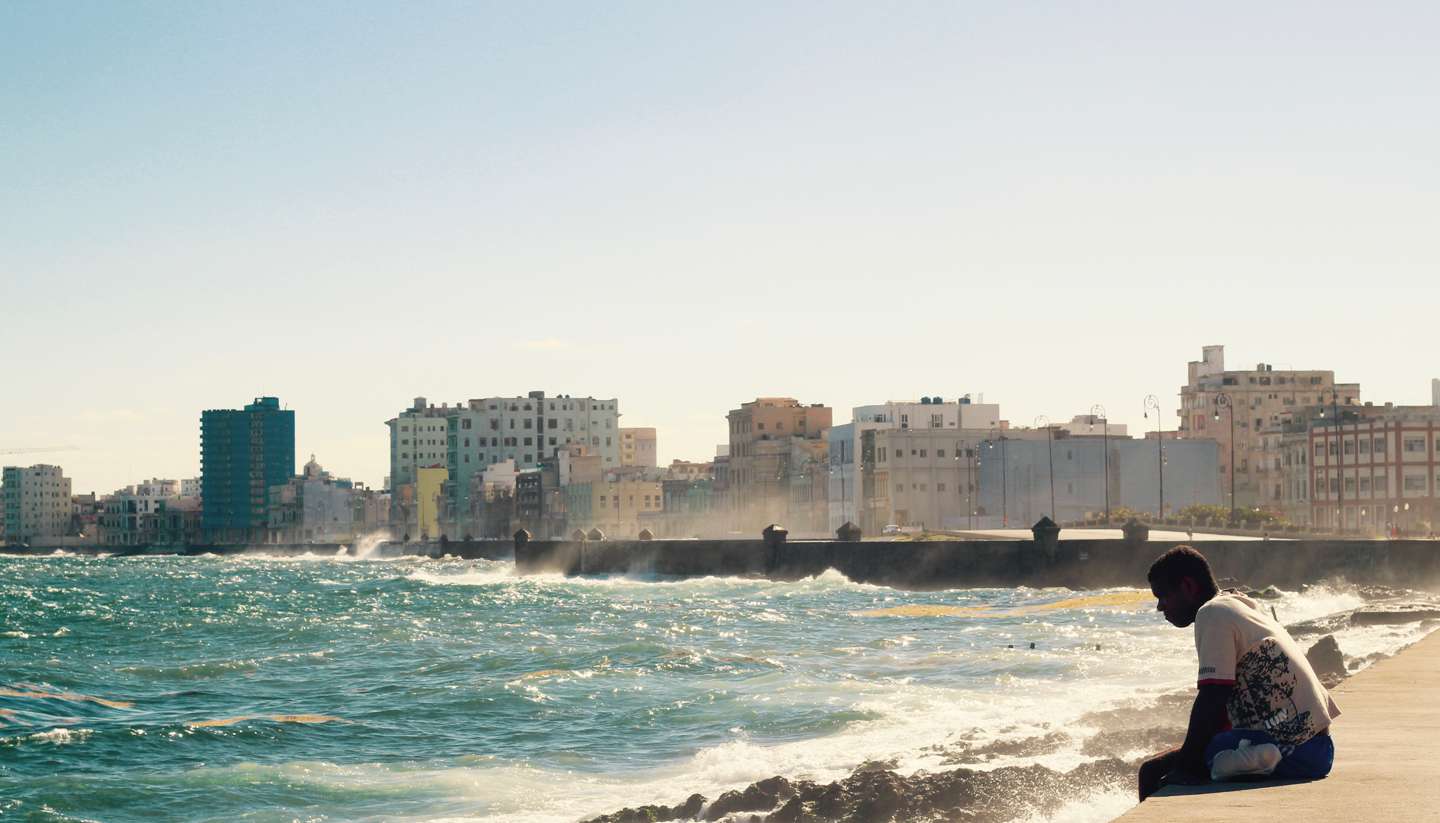 "Everything that you're about to see is exactly as it was when Hemingway left. When he shut the door, he expected to be back a few months later, but he never was. He was suffering from severe mental illness at the time and before he could properly be helped, he shot himself."

The words of Nelson Albuquerqe, Professor of Literature at Havana University and my guide for the day, as we pull up in front of Ernest Hemingway’s house, now a museum, in the hills above Havana. It tells a story of his life from wall to wall and is exactly as I’d hoped, down to the very last detail. Even the bathroom wall is scrawled with the dates and weights Hemingway would record during his bouts of illness.

I’m sitting in a turquoise blue 1965 Buick 8 convertible, the very type of car the Nobel Prize-winning author drove during the 20 years he lived here. As for many writers, Hemingway is a hero of mine and the story of his life has fascinated me ever since I read his masterpiece, The Old Man and the Sea, back in school. 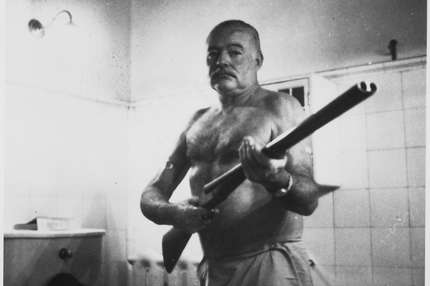 Climbing out from the back seat of the car and walking up a hill flanked by lines of royal palms and swaying mango trees, I head to the side entrance of the house, push open the door and lean against the frame. In what must have been Hemingway’s study, a writing desk sits peaceful and empty at the front of a room furnished with the mounted heads of African kudu and black-eyed antelope, alongside shelves crammed full of books bound in black and red leather.

Hemingway lived in Havana for a third of his life, from 1939 to 1960, and became dearly loved by the people of Cuba. It’s apparent at every turn in the capital – a bar with his picture ceremoniously hung on the wall, or a life-size statue sitting casually in the corner of a restaurant. Everyone claims to have hosted him, and everyone has some link to him, however tenuous. So much so in fact that he seems to have drunk in every bar in town at some point or other. And given his infamous love affair with the bottle, I for one believe it.

I spend the morning hours exploring Hemingway’s house (Finca Vigía Km. 12 ½), walking the gardens and peering into his life from every angle I can find. It’s a fascinating insight into the man’s dramatic history. But eventually I drag myself away, heading back into town to explore some more of his fabled haunts. 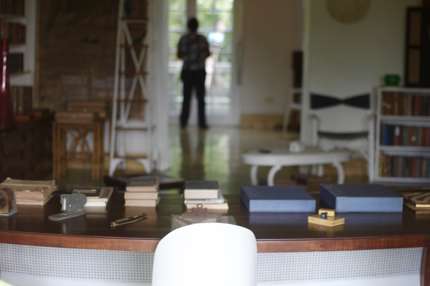 Driving down the Malecón

Driving down into Old Havana, crumbling buildings flicker past on my right and the spray from the sea whips over the road on my left, the light catching the spray in the air like flecks of crystal in the sunlight. The ceremony of driving along the Malecón, Havana’s famous coastal road, is almost unparalleled.

Unchanged and uncared for in 60 years, the city is in a sorry state of disrepair. Facades of the once grand and elegant buildings have peeled away, revealing the hard concrete and steelwork behind. But Havana hasn’t lost an ounce of intrigue or beauty from its historical heyday.

The roads are rough, littered with potholes and open drains which spread out into the flow of traffic. Classic cars are everywhere, the most pristine ones kept for the benefit of tourists, but many are in general use. They’re a testament to the economic boom the country enjoyed during the 1950s, when Americans used Cuba as a retreat for gambling, alcohol and luxury holidays, flooding the Cuban market with US dollars. The economy flourished but crime was rife, with the mafia controlling much of the market, up until Fidel and Ché decided a revolution was the only way to stop the corruption in the country. 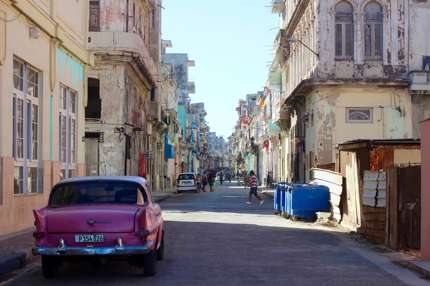 Music plays from every street corner, old men smoke cigars and fruit sellers hustle passers by. It’s picture perfect and easy to see why someone like Hemingway would fall so deeply in love with it. That’s not to say Cuba’s not poverty stricken, however. The country has been strangled by economic sanctions and political ideology for decades and this is apparent now more than ever.

But it wasn’t always like this. During Hemingway’s time here he saw the country prosper, thanks mostly to its large, belligerent neighbour, the USA, and its strict laws on alcohol – American prohibition in 1920 changed it all. Rum became Cuba’s main export, and the American people wanted it by the barrel.

During the 1920s, when Hemingway was still living in Key West in Florida, he befriended notorious bootlegger Joe Russell, famous around these Caribbean islands. Russell was known to bring in rum from Cuba and essentially flooded the US market with cheap, quality booze. Drawn by the prospect of cheap rum and big game fishing, two of his life’s enduring passions, Hemingway began paying Russell $10 a day to take him across the Florida Straits by boat. There began his love affair with Cuba, and a brief but profitable time dabbling in the illicit rum-running industry. 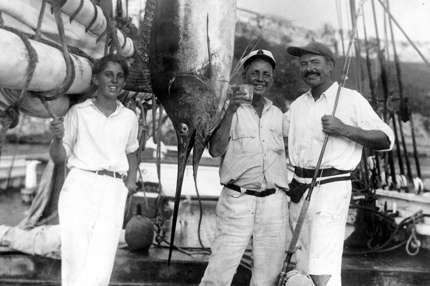 Joe Russell and Ernest Hemingway with a marlin, Havana Harborwww.jfklibrary.org

Driving through the heart of Havana Vieja, the wealthiest part of the city, Nelson points to a name written on a sign above a low-key bar: ‘Sloppy Joe’s’

“This is where it all started,” he says with a laugh, “The start of moral decay.”

Sloppy Joe’s (Calle Zulueta No. 252) was one of Hemingway’s favourite bars and a drinking establishment central to the American dream in Cuba, or so I’m told. American men and women would come here during the prohibition era to drink and dance with free abandon, and the bar gained huge notoriety in the US as a result. So much so that after alcohol was legalised again in the States, Joe Russell opened his own Sloppy Joe’s in Key West and finally went straight-ish. The bar was a symbol for the liberalism and decadence that Cuba became known for, right up until Fidel’s revolution.

Since reopening in 2013, after an absence of more than 40 years, Havana’s Sloppy Joe’s is no doubt cleaner and somewhat less debauched than its former incarnation, though it retains the air of an underground speakeasy. Today it’s wildly popular with tourists and many consider it to be the best bar in town. We dart in, order a Cuba Libre and pick at a plate of salted plantain chips while the patrons mill around chatting and drinking.

Even if it’s a shadow of its former glory, sterilized since returning from its hiatus, there’s still hints of its riotous history dotted around the room in the photos of celebrities drinking and dancing that hang from the walls. We finish our drinks and head back out to the car. Most people walk in Havana, taking the time to stop and talk to their neighbours and live life at a relaxed pace. With communism still ruling over the people there’s little incentive to work hard, which in turn allows for this slow pace of life. It is unsurprising considering whether you’re a doctor or a mechanic you will be paid the same amount, which is around $40 per month.

Winding our way through the warren-like streets of the city centre, we emerge onto the ostentatious Central Park. The architectural masterpiece of the Gran Teatro de La Habana sits on the corner of the square, the statue of writer and revolutionary José Martí at its centre, surrounded by greenery at the entrance of the Paseo del Prado boulevard. It’s a perfect example of how the grandeur of colonial Spain once blossomed here. 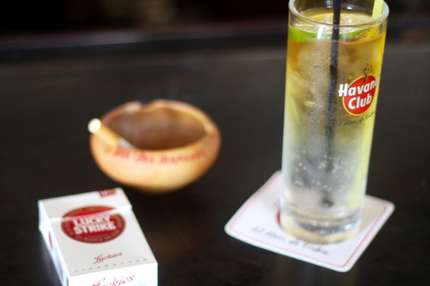 Bar El Floridita (Obispo No.557) shamelessly claims to be the home of the Hemingway Daiquiri. Located just a block down from the park, it’s another of Havana’s most popular watering holes and is celebrating its 200th anniversary in 2017.

Frozen Daiquiris are the order of the day here and they’re made at lightning speed by the smartly dressed bar tenders, six daiquiris at a time. The blenders on the bar remove the romanticism somewhat, but the drink itself is delicious. The bar is packed, filled with cigar smoke and the noise of snapping cameras and Cuban music. It’s a tourist hotspot and now a bit of a clichéd experience, but still fun nonetheless.

The sun is dropping in the sky and the blues are turning to pinks and purples. It’s time to move on and head to the last spot on my list. It’s a little out of town but at this time of the afternoon the drive is magnificent, the golden light bounces off the clouds and palm tree fronds are silhouetted against them. Driving along the coast we stop briefly at the colonial fortress that stands guard over the city. Looking back across the stunning sight of the harbor, I see Havana stretched out before me, looking almost unreal in its beauty. 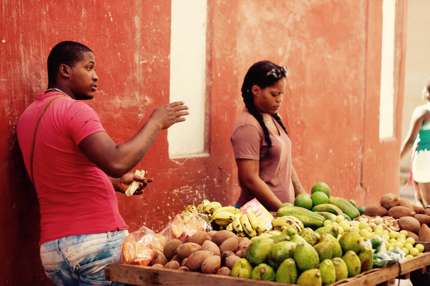 The Old Man and the Sea

The Buick cruises into the sleepy coastal village of Cojímar. The wind picks up as the sky turns wild and grey, trees sway and twist with the force of the wind coming off the ocean and sea birds caw noisily as they fly inland.

A little fishing beach appears between two houses. It’s scattered with ramshackle huts, boats slung with nets and worn lobster pots stacked on top of one another. Nelson turns around in the front seat, smiles and points out towards the shoreline. “This is it. This is the beach that The Old Man and the Sea was all about. Hemingway used to drink at the bar just up the road and look down at the fishermen every day. It was the inspiration for his greatest work.”

I look out at the choppy sea and the white horses cresting the waves, and it’s easy to see how such brilliance could be inspired by such a place. I sit back for a while longer until the light dies and the spots of rain begin spattering the car, then we fire up the Buick one last time and head back to town for another rum. Hemingway style.

Cuba enjoys a hot, sub-tropical climate all year-round. Rainfall is highest between May and October and the hurricane season officially runs from July to November, with most storms historically occurring in October and November. The cooler months between January and April are popular with visitors, they’re also the driest period of the year.

Check out our Cuba travel guide for more information.

Liked this article? You may also like:
24 hours in Havana – an informative guide to all the essential stops in Havana.