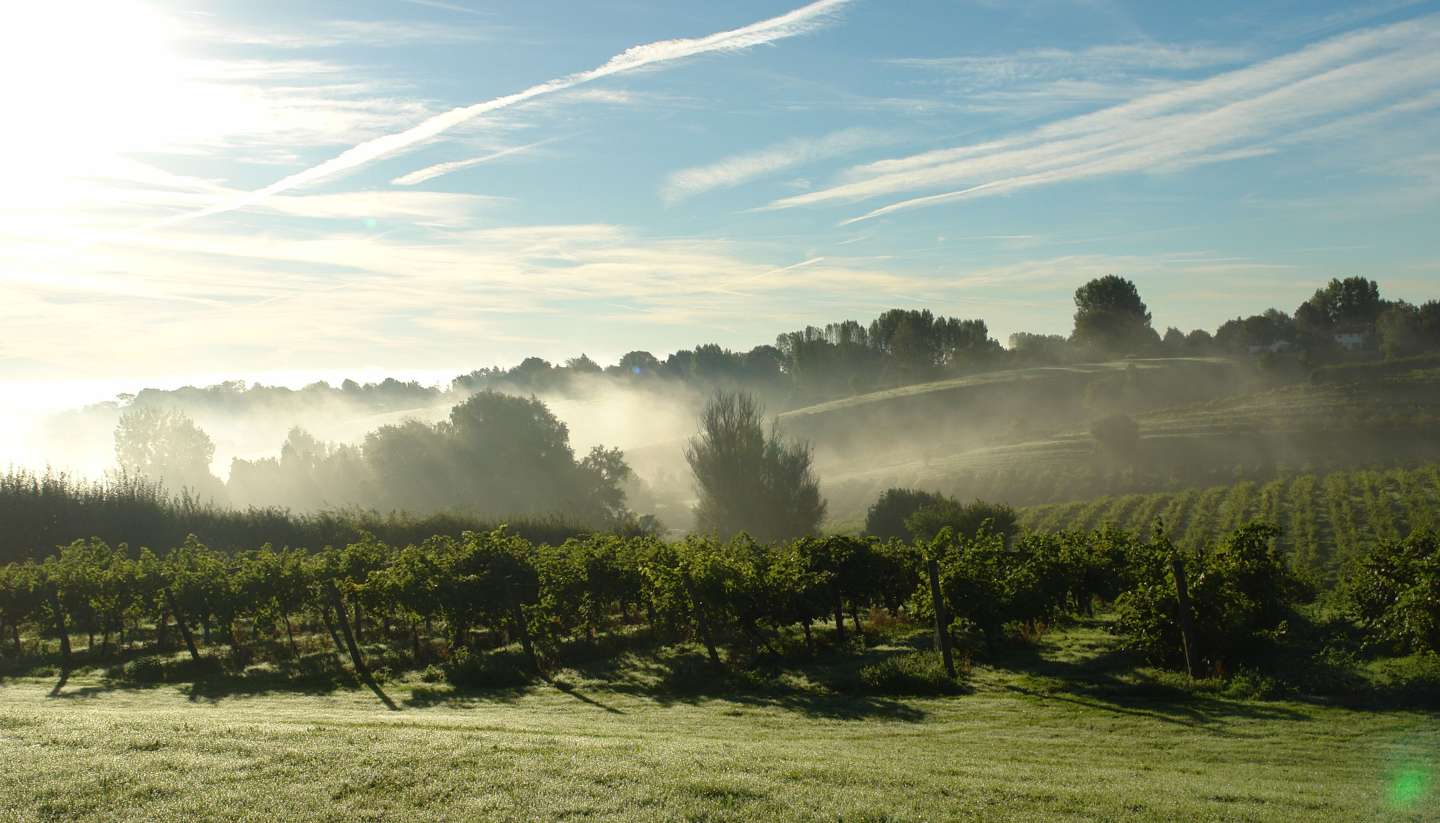 As English wines grow ever more popular, winning numerous awards and being stocked in supermarkets, it seems Britain's in the grip of an unlikely love affair with the plonk. Jane Duru silences her inner sceptic with a tour around the Three Choirs Vineyard.

No doubt that when I told my father we were going on a wine tour, he’d imagined we’d be jetting off to Bordeaux, or perhaps rocking up in Rioja. Not going to Gloucestershire.

Naysayers may point to the good old British climate and scoff at the idea that these shores can produce quality wines. But with over 400 vineyards and counting, spread throughout the British Isles (yep, Scotland included), a nascent wine tourism industry is out to prove them wrong.

So, these were English wines we’d be tasting. And for that, we need venture no further than an hour’s drive south of Birmingham (my father’s regular stomping ground) to the Three Choirs Vineyard in the market town of Newent. The proximity to home was perhaps less exotic than he’d hoped.

But arriving on a sunny October morning, it was a different story. Despite being near Birmingham, the vineyard felt a world away – and not just because the scene evoked something approaching the Tuscan countryside minus the cypresses, all gentle rolling pasture and orderly vines.

Having turned up early, we took advantage of our freedom to roam the estate, and walked through the rows of vines whilst listening to various audio guides dotted around and snacking on the juicy plums and blackberries foraged from surrounding hedgerows – the discovery of which had produced the kind of excitement that can only come from naive urbanites marveling at the reality of where food comes from. (Plums! Free!)

Back at the main building, the tour began with a refreshing glass of sparkling Classic Cuvee, a blend of seyval blanc and pinot noir, with a dry rounded taste, and tour leader Bart explaining how Three Choirs came to be one of the UK’s largest vineyards.

Formerly a fruit farm, in the 1970s, owner Alan McKechnie was inspired by the fact that the Ancient Romans had once cultivated vines in this region and decided to try his hand at viticulture. Using German grape varieties, he bet on the ability of the sandy soil and Newent’s microclimate – sheltered by the Malvern hills and Brecon Beacons, average temperatures are 2°C higher – to sustain their growth. Sure enough, six years later, the first harvest was taken and the seeds of wine production had been sown.

From that first experimental batch, and despite being a geographical oddity (the lion’s share of producers are located further south in counties like Kent and Sussex) Three Choirs has grown into one of the UK’s largest producers, with 20 different varieties produced across 30 hectares (75 acres) and a rosta of award-winning wines.

Vines are raised off the ground to prevent frost ruining the crop, and grapes are hand-picked during the harvest season from late September to early November, with only 24 hours elapsing between picking and pressing.

We could see the production in action as our tour took us behind the scenes into the plant, where grapes were being sorted, pressed and bottled in a hum of whirring machinery and the pervasive smell of yeast made noses wrinkle. Soon-to-be-sparkling wines were housed in metal cages undergoing ‘riddling’ (a process of removing sediment from the wine by rotating bottles frequently), whilst Bart pointed out the huge metal tanks and oak barrels used for storing.

The tastings came thick and fast throughout, Bart revealing that Three Choirs wines are more focused on producing young, aromatic, eminently drinkable wines that aren’t for aging. Siegerrebe, a dry aromatic white, was my favourite, but the others – a slightly peppery, light red called Raven’s Hill, and Willow Brook, a delicate blend of Siegerrebe and Schonburger – also garnered murmurs of approval from the 40-strong group.

The hour passed, and wines swilled and quaffed, it was time to retire. But our day at Three Choirs didn’t end with the tour. The on-site restaurant, where my father and I later enjoyed a great meal (21-day aged steak, and duck with crispy pancetta, all washed down with Siegerrebe, of course) proved an excellent dinner option, and retreating to our lodge room close by invoked feelings of blessed relief at not having to drive. We woke to reviving blue skies and mist-swathed vineyards. No, it wasn’t Bordeaux, but it wasn’t bad, not bad at all.

A visit to Ridgeview on the South Downs, makes a great day out for wine lovers. With fortnightly guided wine tours around the vineyard, guests can see the cellars and taste the latest releases of consistently award-winning sparkling wines whilst overlooking the picturesque Sussex countryside.

Down south in Surrey, Denbies is one of the biggest and best vineyards out there and well placed for receiving tourists, with a large canteen self-service cafeteria, a year-round ‘Indoor Wine experience’, an attached B&B and even a train for outdoor vineyard touring. The wine’s not half bad either – its Noble Harvest 2011 won a Gold at the IWC (International Wine Challenge) awards last year.

Winner of multiple IWSC (International Wine and Spirit Competition) awards, including English Wine Producer of the Year 2012, the family-run Bolney Wine Estates near Brighton is a delight. Whether you just want to pop in for a glass of delicious fizz, eat lunch at the Vineyard Café or go the whole hog and take a tour around the 16-hectare (40-acre) estate, it’s definitely worth the trip.

Get to grips with how your favourite tipple is made, with a tour of Chapel Down. Visiting the poster boy for British wines is a great gastronomic experience in general – follow up a tasting with a visit to the fine foods store and a meal at The Swan restaurant. Booking is essential as weekends can get very busy.

Sparkling wine now accounts for two thirds of English wine production, but few places do it better than Furleigh Estate, in West Dorset, whose 2009 Classic Cuvee was one of the best sparkling wines in the world last year. They run 90-minute tours every Friday and Saturday afternoon.

Wine tasting tours are £9 with wine, £5 without. For English Wine Week (24 May – 1 June), enthusiasts can take advantage of a special tour, offering a deeper insight into English wine. Winemakers will explain the harvesting process, including pruning techniques and why they’re so vital to a good crop and healthy vines. Dates are 27 and 29 May; prices are £19.50 per person. The Vineyard Rooms start from £135 per night; Lodge Rooms from £160.

Is it worth it?

Considering that for £9 you get four reasonably sized glasses of wine, plus the tour, yes it is.

Tour group sizes can be quite large, and keep in mind that a sunny weekend will attract many more visitors than if the weather’s a bit ropey. If you’re after a more personalised, intimate experience, this isn’t it.

More on food and drink: