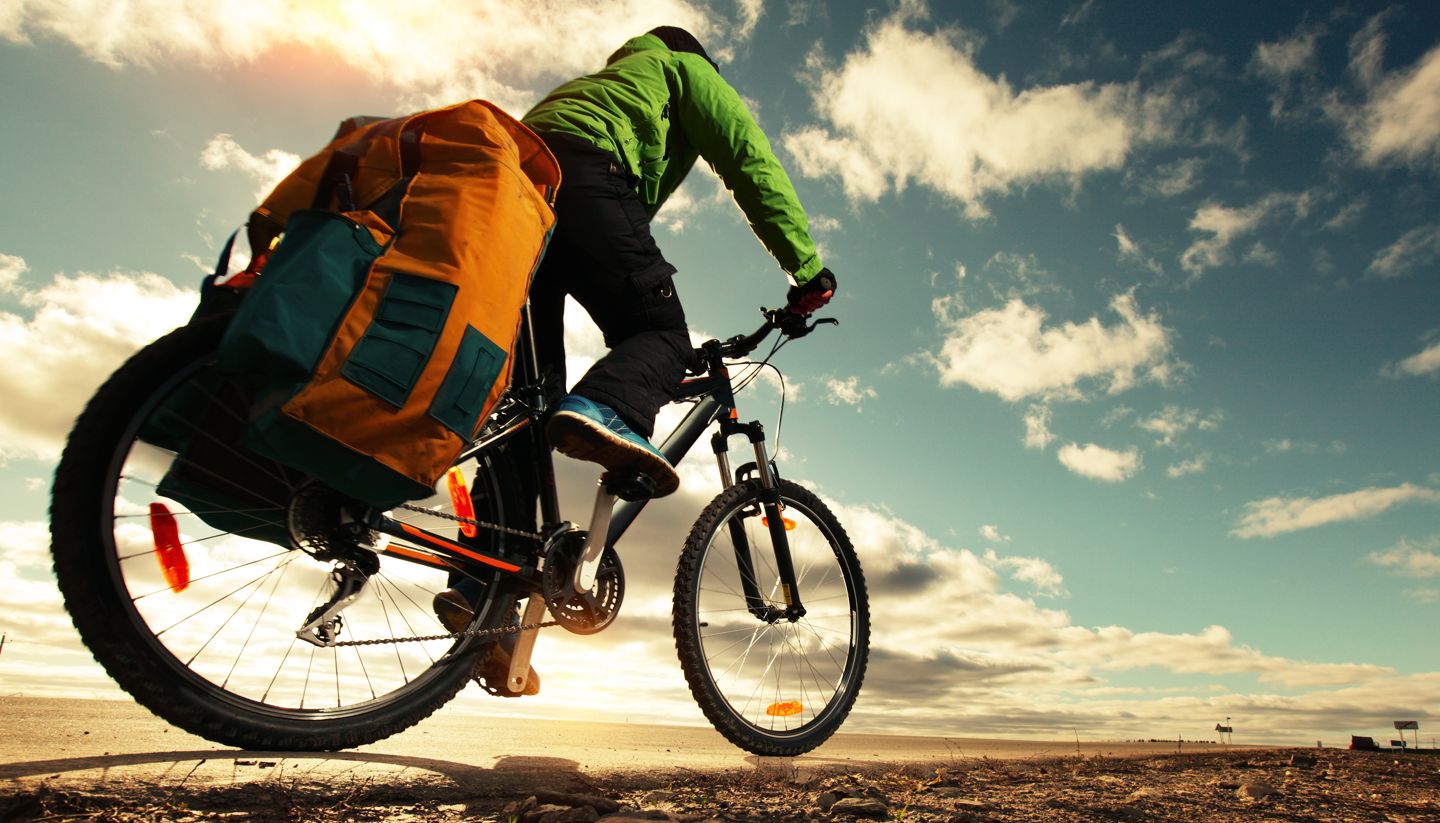 From the urban cities of Europe to the wilderness in Canada, cycling around the world is a possibility for some adventurers

Hundreds of people have attempted to cycle around the world and some have succeeded. The two figures that most people think of when this subject comes up is Mark Beaumont and Jenny Graham. 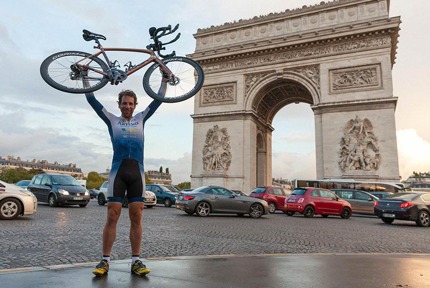 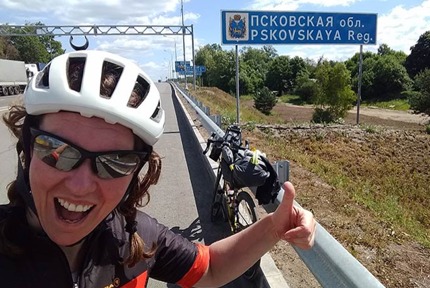 To make it a round-the-world cycling trip, the Guinness World Records state that:

Both Beaumont and Graham chose to go from west to east and they rode almost identical routes – except Beaumont started and finished in Paris while Graham chose Berlin as her starting and finishing point. Both of them went through several countries in Europe to reach China, rode across Australia and New Zealand, zigzagged through the United States and Canada, before returning to their starting point in Europe. Their routes are widely considered to be the best routes if you intend to cycle the world yourself.

Here are the four stages ridden by Beaumont as shown on www.artemisworldcycle.com. 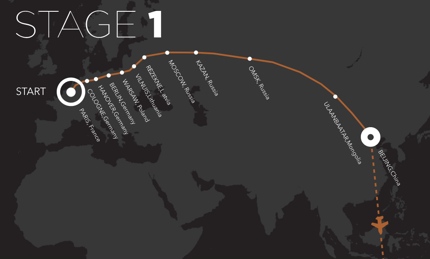 Beaumont’s trip started at 4 am on 2 July 2017 in Paris. On the first stage, he passed through Germany, Poland, Lithuania, Latvia, Russia, Mongolia and China. In Beijing, he took a flight to Perth in Australia. 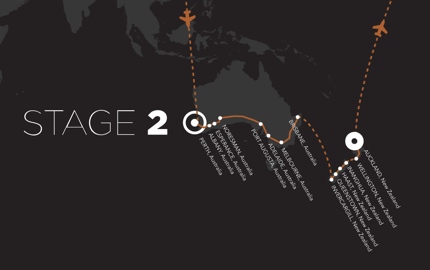 The second stage was all about Australasia. From Perth, Beaumont rode pretty much along the southern coast of Australia to Melbourne before heading north towards Brisbane. From Brisbane, he took a flight to Invercargill and from there, he rode the length of South and North Islands to Auckland, then it was time to cross the Pacific Ocean to Anchorage, Alaska. 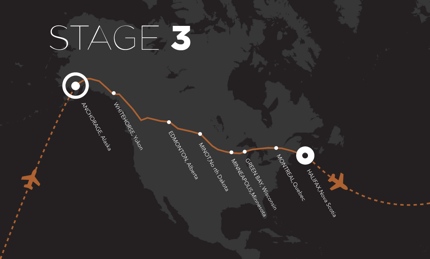 The third stage began in Anchorage, Alaska and Beaumont steered clear of the Pacific Coast (Mountain) Ranges by following Alaska Route 1 towards Tok. From there, he headed southeast towards the great plains of Saskatchewan. He dipped briefly into the United States (North Dakota, Minnesota and Wisconsin) before zipping back up into Canada. He then followed the mighty St Lawrence River for a period, before heading southeast towards Nova Scotia. 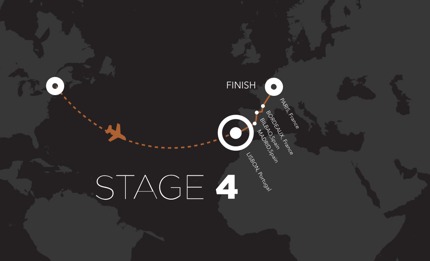 From Nova Scotia, Beaumont took another flight across the North Atlantic Ocean to Lisbon, Portugal, where he began the fourth and last stage. He cycled through Portugal, Spain, before ending at Arc de Triomphe to a huge round of applause.

Can you include Africa and South America?

In 2001, Alastair Humphreys left England on his bike and started an epic journey that took him four years and three months to cycle around the world. Altogether, he cycled through 60 countries on five continents – Europe, Africa, South America, North America and Asia – pounding through 74,030km (46,000 miles) of tarmac, dirt roads, pasture lands and ice roads with sheer strength and determination.

Although Humphreys did include Africa and South America, he skipped Australasia. You can see his routes in this short video clip.

The man who spent 50 years cycling around the world

Heinz Stücke left his hometown of Hövelhof, Germany in November 1962 on a bike because “it was better than working in a factory,” according to the interviews he gave to several news outlets.

He then spent the next 50 years cycling 608,332km (378,000 miles) across 211 countries and territories – this number changed a few times because boundaries were being redefined over the decades when he was on the road. Nonetheless, his endeavour has earned him the title of “the most travelled man on earth” by Guinness Records. In 2015, he turned some of the photos he took and diaries he kept into a book called Home is Elsewhere: 50 Years Around the World by Bike.

Spanish filmmaker Albert Albacete also created a documentary called The Man Who Wanted to See It All, covering Stücke’s life on the road. You can see the preview on Vimeo by following this link. 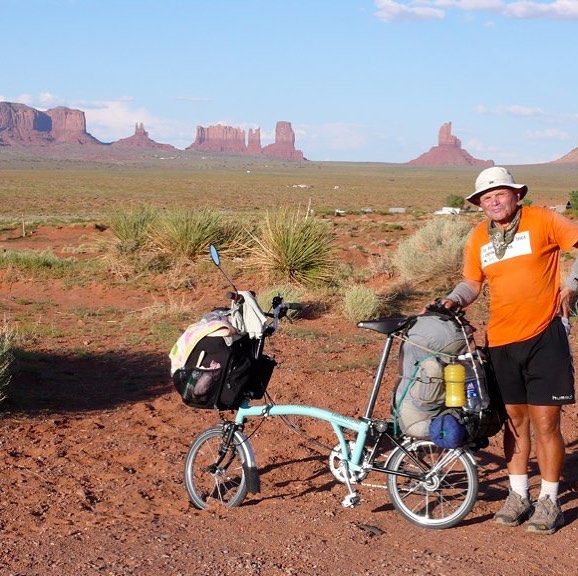 No matter which routes you take, planning is key. In 2011, Dave Alley, a Queensland police officer and father of three, cycled through six states and territories in Australia in 37 days 20 hours and 45 minutes. Although the ride lasted almost 38 days, the preparation took two years prior. Alley trained 40 hours a week, had a chiropractic session and two physio sessions a week, and also used float tanks for the recovery process. He and his team also tried to predict the unpredictable – like the weather, including where and when Alley could get favourable tailwinds to help him make up lost ground.

If you are planning a round-the-world trip, invest a considerable amount of time plotting your routes, examining the topography of your destinations, considering the weather, undergoing rigorous training, learning how to repair your bicycle and above all, be prepared for all eventualities.

What do you need to take with you?

Apart from the overwhelming list of tools and spares, Graham also needed clothes suitable for all weather conditions, a good supply of bandages, painkillers and antibiotics, and a dynamo generator which keeps her devices charged when the wheels are turning. To keep the packing ‘light’, Graham didn’t have a tent – she “slept in bus shelters, toilet blocks and pipes under the road”, according to an interview she gave to Guinness World Records.

Here is a list of items that most cyclists would take along:
1. A tent, a sleeping bag and toiletries. Even if you don’t want to rough it, keep in mind that you may have to slum it, particularly if you’re in the middle of nowhere.

2. Clothes for all weather conditions. Light to medium-weight layers work best as layers can keep you warm at night and during blizzards. Scarf and sunglasses can shield you from sandstorms while sun cream protects your skin from UV rays too.

4. Instead of paper maps, opt for a GPS device and keep it charged using a dynamo generator like a SON Hub Dynamo. Mobile phones are useful but coverage may be an issue if you intend to spend most of your time in the backcountry, so consider a satellite phone.

5. A medical kit, including but not limited to first-aid dressings, sterile wipes, bandages, painkillers and antibiotics.

7. The appropriate vaccinations if you plan to go through high-risk areas. Vaccines required may include Hepatitis A, Hepatitis B, Rabies, Typhoid, Meningitis, Cholera and Yellow Fever. Malaria is a serious threat and you cannot be vaccinated against malaria, so avoid mosquito bites by covering up with clothing and using insect repellents.

8. Of course, you can’t leave home without some cash (US dollars and euros are most useful), credit cards (have at least half a dozen), your passport and a very good travel insurance policy. 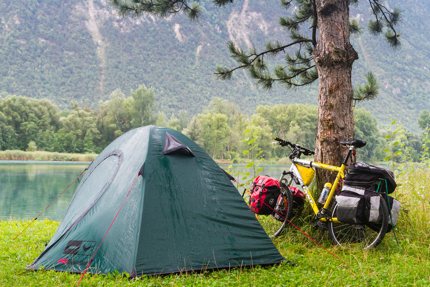 A tent and a sleeping bag are common items

What sort of budget do you need?

When Mark Beaumont embarked on his adventure, he was supported by a team of specialists, including three team leaders, a performance manager, a small group of mechanics, a navigator/ logistic manager, and photographers who shared the entire journey online. The trip was said to have cost £25,000. Humphreys, on the other hand, funded his four-year-and-three-month trip using a £7,000 student loan, spending just £137 a month on the average.

Assuming your trip doesn’t need any boat or plane rides, you should, in theory, spend a lot less than those who need to travel from Asia to Australasia or from North America to Europe.

Beware that emergencies will also cost you money. Beaumont fell twice during his quest, including a fall that required emergency dental treatment – thankfully he had a support team with him to sort it out. If you’re on your own, you probably need to visit a local hospital, pay for the service and hopefully you can claim it back from your insurance provider.

What’s the best bike for such a long journey?

Ask any cyclist who has taken an ultra-distance journey and they will probably name different manufacturers. However, many will agree that you generally want something sturdy and durable – like a bike with a steel frame. This has the benefit of being more ‘weldable’ than the likes of titanium or aluminium if you need some emergency repairs. Modern touring bikes, with their alloy frames, are pretty sturdy too.

Heinz Stücke spent some 60,000km (37,282 miles) of his cycling trip on a Brompton, a UK-manufacturer known as the “mother of all folding bikes”. Each Brompton bike is hand-brazed, so although it is light and compact, it is also incredibly tough. 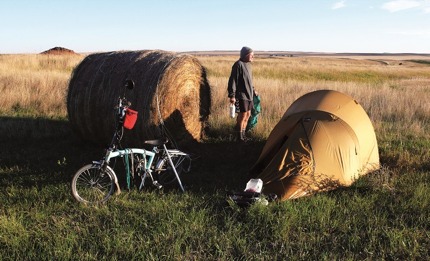 Heinz Stücke with his Brompton ©brompton.com

There are plenty of blog posts out there encouraging you to disavow yourself of everything and just ‘do it’, but taking action is often not that easy in reality.

Your own safety should be the top priority and a long ride comes with many challenges. Even if you can successfully avoid areas where political violence is common, you may not escape from bears in the wilderness and food or water that can make you sick. You must also consider your mental health. In an interview with the BBC, Alastair Humphreys said he “underestimated the mental side of the trip,” and that to him was the hardest part. Spending a long time on the road by yourself in foreign lands can trigger unwanted feelings that may overwhelm you. 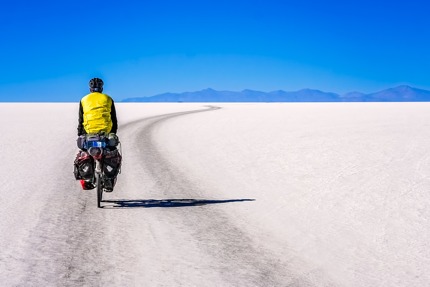 Not everyone is good at coping with fame (or lack of) after the ride too. While some cyclists have gone on to sell a few books, others haven’t gained much media attention.

On a positive note, if you’re after spectacular sunrises and sunsets, new sights, new friends and new experiences every day, get ready to start planning your round-the-world cycling trip.