Hunting with Bushmen in Namibia 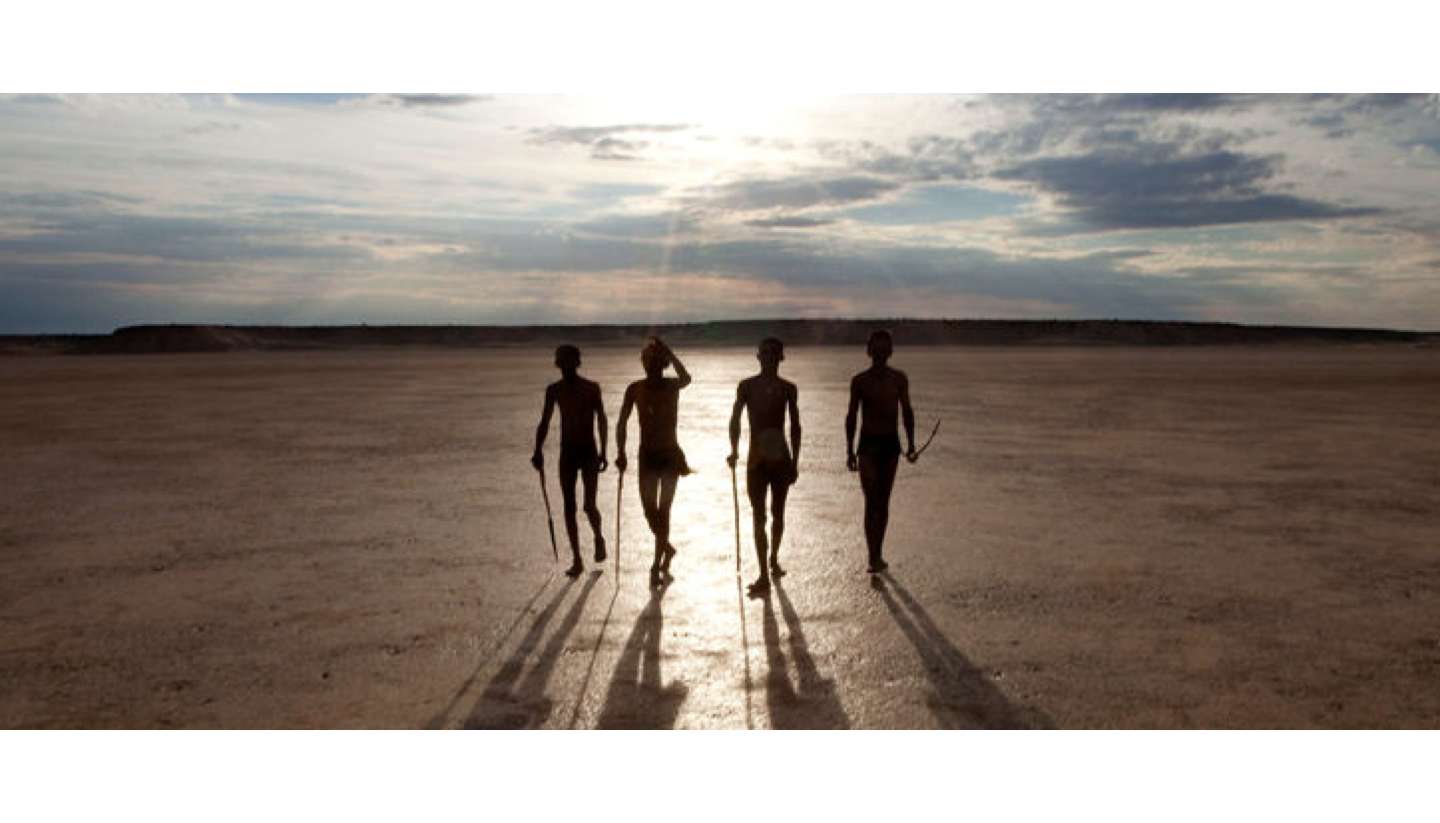 As I watch, hunter N!abi wriggles into a sandy burrow fringed with scrubby grass that belongs to a porcupine. At five foot eight, and slender with it, N!abi isn’t huge but he’s still a lot bigger than the den’s spiky owner. The hole is barely wide enough to contain him as he wriggles in, slowly widening the entrance. He disappears into the darkness, spear in hand, leaving only a pair of battered Converse clad feet above ground. Then even they vanish. We stand and wait. Eventually he re-emerges empty handed, brushing sand off his shoulders and shaking his head ruefully. For the Ju/’hoansi San of //nhoq’ma, there’s no porcupine supper tonight.

A couple of days earlier, I’d arrived in the remote Bushmanland region of northern Namibia in the hope of seeing some animals and finding out a bit more about the Ju/’hoansi branch of the San people. Part of the vast 900,000 sq km (347,500 sq m) of the Kalahari Desert, the San call the area around the battered little town of Tsumkwe, home. The region is as wild as it is beautiful: inhospitable sandy scrubland dotted with gnarled fruit-bearing trees. It looks far from friendly but, as I was about to discover, you don’t need to be Bear Grylls to try your hand at surviving here – provided you’ve got a San guide to show you what to do.

Ours was named Tumkat; a big smile under a safari hat and a not-at-all traditional t-shirt. But although he’d dispensed with the springbok skin loin cloth and elaborate beads favoured by N!abi and the other hunters, he proved to be no slouch on the foraging front. Not that we had to do too much of that ourselves because at Nhoma Camp, a small 10-tent sleeping spot run by the local San with the help of a taciturn and wildly funny Afrikaaner named Arne, food was most certainly not in short supply.

Mod cons notwithstanding, Nhoma, a three-hour drive along a rugged dirt track from the nearest decent-sized town, Grootfontein, is remote to say the least and proved to be the perfect base for getting to know the San. So perfect, in fact, past guests have included Ian Wright and Bear Grylls himself – neither of whom managed to impress the San with their survival skills, according to Arne. Metres from the San village of //nhoq’ma, everything from housekeeping to having fun is organised by the locals.

Close to the Namibian border with Botswana, on the western edge of the Kalahari Desert, the land that surrounds //nhoq’ma boasts a stark beauty, with carmine sandy soil pockmarked by foamy clumps of silver elephant grass and hunched Zambezi teak trees. It’s hot, dry and a tough spot to survive in. But survive the San do – and they aren’t alone. Along with 400 different types of plant, the Kalahari supports a bewilderingly large array of fauna, including hyenas, lions, antelopes and giraffes as well as warthogs, meerkats and porcupines. It might look unpromising at first glance but for the San, a tribe believed to have lived in the area for at least 30,000 years, the Kalahari is one big larder.

We had headed out into the desert in search of porcupine but that didn’t prevent Tumkat and the other members of our hunting party, N!labi, Ikunta, #niaici and another N!abi, from stopping to demonstrate their survival skills. From a mind-boggling array of local flora, there wasn’t much they didn’t have a use for: one bizarre melon-shaped root emits a stream of drinkable, if bitter, liquid when squeezed; another tackles back pain and hoodia leaves are used to suppress the appetite.

There was also plenty of euphorbia, a fleshy bush that secretes a poison so potent, the San use it to tip their arrows and bring down larger prey such as oryx, waterbuck and even giraffes. Not that we were to be so lucky. After two hours wandering through the bush, we’d found plenty of plants but not much in the way of fauna – until, of course, we happened upon the porcupine mound.

Despite coming up empty-handed, a slap-up lunch was waiting for us back at Nhoma and in the afternoon, more survival skills were on show up at the village. Among them were bow and arrow making, including a demonstration of where to find the right sort of fencing wire to tie on the tip, and trap making – complete with entertaining re-enactments. Sitting in sandy circle dominated by a huge plane tree and dotted with dome shaped huts made from foraged twigs and bits of wood, we learned how to make jewellery using eggshells as the local children clustered curiously around us. It was wonderful and completely unique. It certainly wasn’t your average safari experience either but with the survival skills I picked up, I could give Bear Grylls a run for his money.

Getting there
South African Airways (flysaa.com) offers return flights to Windhoek from London Heathrow via Johannesburg from £1,010.

How to do it
Meet the San during a seven night trip with Chameleon Holidays and Travel (www.chameleonholidays.com). They offer a guided or self-driven tour, including one night in Windhoek on a dinner, bed and breakfast basis, one night at Erindi Private Game Reserve on an all inclusive basis, two nights at Nhoma Camp all inclusive with a day of activities with the Bushmen, one night at Okonjima Main Camp on an all inclusive basis with two activities, plus a final night at N/a’an ku sê Lodge and Wildlife Sanctuary on a full board basis with one activity included.

The guided option costs £1,850 per person (based on four people travelling) including all accommodation, activities and airport transfers, plus meals as stated, English speaking guide and safari vehicle. A self-driven tour costs £1,360 per person (based on two people travelling) including all accommodation and activities, airport transfers and meals as stated and a 4×4 vehicle.

Alternatively, Exotic Travel and Safaris (www.exotictravelsafaris.com) offer a 12-day tour that includes a visit to meet the San people plus accommodation, meals and transfers, with packages starting at £1,874 per person.

Find out more
For further information on Namibia, visit namibiatourism.com.na.