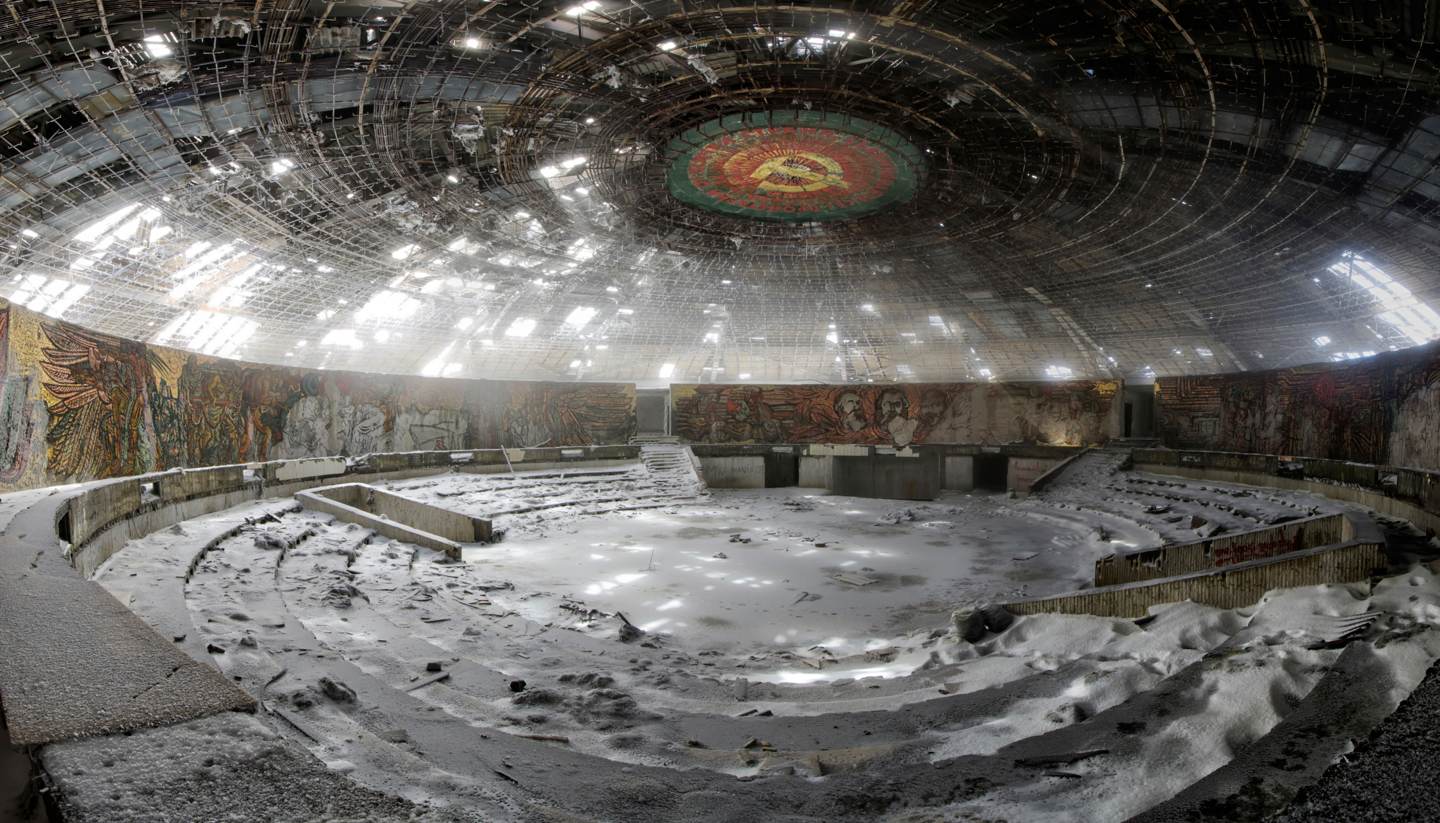 That’s what Tosha asked me 40 minutes ago. Now I’m pulling myself up through a tiny, wet hatch into a building that’s so soaked in cloud, it’s entirely invisible until I’m barely five feet away.

The rusted pole I’m using for leverage groans under my weight. I have no concept of what I’m climbing into, or why we can’t just go in through the front door. It’s at this point that Tosha, my driver (and since turned guide), tells me the Buzludzha monument we’re scaling is actually closed to the public. In the eyes of Bulgarian officials, we are breaking the law, but so start all the best stories.

The all-pervading cloud is the constant object of Tosha’s ire. He laments the fact that the view (where one apparently “sees all of Bulgaria”) is non-existent today. The eerie, suffocating mist gives everything a tense, claustrophobic air. It’s like a horror film: I half expect Kathy Bates to appear with a cup of cocoa and a come hither smile.

Once we scramble into the amphitheatre-like main room, Tosha tells me to be careful not to slip on the banked seats paved in spotted red marble – or at least half-paved. The room is probably 50m (164ft) in diameter; chunks of it have been ripped up or torn out. Whether this is from looting, heavy-handed vandalism or just the passage of time, it’s hard to say, but it’s a theme mirrored throughout. The place quite literally reeks of opulence left to rot.

Completed in 1981, Buzludzha was a venue for Bulgaria’s socialist party meetings and celebrations. Around the sides of the circular room are intricate, multi-coloured mosaics. Unsurprisingly, they are heavy on Communist and Soviet imagery: workers; war; soldiers in shades of red and orange.

Among them are metre-high (3.5ft) mosaics of prominent Communists, stretching back to Marx and Lenin. Some have been scratched away, so only damp silhouettes remain. Tosha proudly points out the space where Todor Zhivkov used to be. The First Secretary of the Bulgarian Communist Party ruled from 1954 to1989. His resignation pre-dated the end of communism here by only a month.

The true centrepiece is the hammer and sickle in the very core of the roof. Cyrillic script from another time circles the scratched yellow symbol. It’s hypnotic; I find myself twisting on my ankles to get a look from every angle, dodging drips of water that fall steadily through holes in the roof.

As we climb back through the hatch, passing the building site that used to serve as reception room and bar, we alight outside and the cloud has cleared enough for me to fully take stock.

It’s only now that Tosha’s original spaceship analogy rings true. The Soviet-futurist building hovers eerily in smoky gloom. It’s perfectly circular, smooth-cornered and bears the rectangular windows of a stereotypical galaxy-bound aircraft. I don’t know if it’s going to crumble on its foundations or take off.

To its left is a vast tower, which I cannot see the top of. From my vantage point, it looks like a conveyor belt to the clouds. As we walk back down the marble steps outside, we stop to take pictures and rue the fact we can’t fully see that view.

Back in the car, I give Buzludzha one last glance. I can’t help but feel fortunate to have been inside this relic of Bulgaria’s history; it’s a past the country has moved on from, but one it will never forget.

Top 5 abandoned places in the world

Where once locals mined for diamonds, visitors now mine for houses. Kolmanskop sprung up in the Namibian desert after diamonds were discovered nearby. Houses, schools and even trams were built before all the diamonds disappeared and the town was left deserted. Today it’s been reclaimed by storms which have savaged the windows and filled the rooms with sand.

If ever a horror movie could write itself, the Beelitz-Heilstätten sanatorium would be the ideal setting. This disused medical facility, complete with rusting beds, tiled rooms, dentist chairs, empty cabinets and echoing halls, is where Hitler was treated after WWI. The Red Army used it as a Soviet hospital until the late 1990s, until everything (including the psychiatric ward) was abandoned. It has been left unlocked since 2007.

While the fun always has to come to an end, it never looks quite as spooky as it does when a theme park closes to visitors. There are numerous pleasure grounds where the credit has run out and the gates have been bolted shut, but Six Flags in New Orleans is perhaps the most tragic. When Hurricane Katrina tore through the city, she ripped apart the amusement park leaving behind broken rides, weed-covered shops and oversized character decapitations.

Daubed in graffiti and crumbling with corrosion, the great train graveyard in Uyuni, Bolivia is nothing but a symbol of a forgotten time. In the 1800s, these British-built locomotives would shift minerals from the Andes to the ports of the Pacific Ocean, but when the minerals depleted and arguments stunted the expansion, they were all left to rust near the Salar de Uyuni salt flats.

Along the Williamsburg waterfront, it’s hard to miss the Domino Sugar Factory. Once the world’s biggest sugar refinery, the machines finally shut down in 2004. The authorities say it’s off-limits, but a number of urban explorers have been inside to find peeling paint, long-forgotten furniture and monstrous apparatus. Recent art installations within have given a glimpse of what lies behind that famous yellow logo.

How to get there
Ryanair (www.ryanair.com) fly directly to Plovdiv, the closest city to Buzludzha with an airport.

Buzludzha is a two and a half hours drive from Plovdiv. There are no arranged tours to the monument, but if you speak to Tosha from Hikers Hostel (www.hikers-hostel.org), he may be able to help you out.

Alternatively, hire a car from Plovdiv Car Rent (www.plovdiv-car-rent.com) or travel with Taxi 1 (www.taxi1.bg) to complete the trip yourself.

Where to stay
If you base yourself in Plovdiv, stay at the lovely 4-star Imperial Plovdiv Hotel and SPA (www.hotelimperial.bg).

Alternatively, try the beautiful city of Veliko Tărnovo, an hour’s drive from Buzludzha. It is ostensibly the country’s third city, but is by far Bulgaria’s prettiest. It has a big artistic community, plus plenty of hiking options to help work off the huge portions of food its restaurants serve up. The traditional Hotel Tsarevets (www.hoteltsarevets.com) is a welcoming stay.