Jerusalem's got the monuments, while Tel Aviv has the nightlife – that's what the brochures say, but is it the whole story?

Forget the brochures – Tel Aviv and Jerusalem have plenty to offer regarding culture, shopping and nightlife.

Tel Aviv is a city blessed with a golden sand seafront, perfectly preserved Bauhaus architecture and a thriving art scene which centres on the old port of Jaffa. There, along with a busy artists’ quarter, you’ll find Maskit, Israel’s only couture house, now owned by a designer who was once head of embroidery at Alexander McQueen. For a more iconic sight, head to Rothschild Boulevard, a 1950s gem lined with modernist buildings and dotted with cafes in the city centre. For a taste of what the city’s young artists can do, head to Noga Gallery of Contemporary Art (60 Ehad Ha’am Street), where you’ll find work by up-and-coming talents. 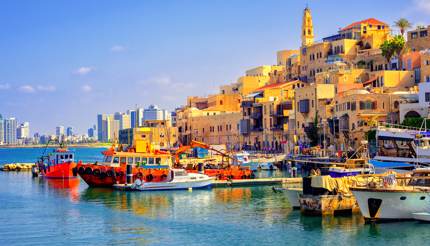 A glimpse of the past

With the Dome of the Rock, the Mount of Olives and the Wailing Wall all within its city limits, it’s safe to say that Jerusalem isn’t short of historical sites. In the Israeli capital, the past, to use a hackneyed cliché, is quite literally everywhere you look. We recommend visitors to start with a trip to the Old City, beginning at the Wailing Wall. The last remnant of the Jewish temple destroyed by the Romans, the monument presses up against the Dome of the Rock and overlooks a square constantly thronged with tourists and religious pilgrims. On the other side, near the Jaffa Gate, is the imposing Tower of David which is part of a citadel complex that dates from 2BC. For a taste of the more recent past, head to Yad Vashem (Har Hazikaron), a hulking modernist building that houses a haunting series of exhibitions documenting the Holocaust.

Back in Tel Aviv, city centre monuments are few and far between, so hop on a bike for the short journey to the ancient port of Jaffa. The port was once at the end of the silk route and has been occupied by a succession of invading armies, including the Romans, Crusaders, Ottomans and latterly, British. The streets of the old town are a warren of quirky boutiques selling art and jewellery, and you’ll also find the skeletal remains of the city’s last orange tree. 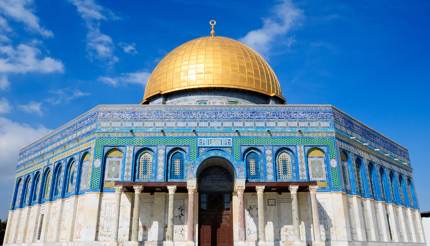 Dome of the Rock in JerusalemVanderWolf Images / shutterstock

Rocks named after goddesses and quaint art shops might dominate Jaffa’s press, but it’s also famous for its oranges, which, among other things, gave their name to the Jaffa Cake. But oranges aren’t the only culinary treat the ancient port has to offer. It’s also famous for being home to the best shawarma (Middle Eastern kebabs) in Israel. At Dr Shakshuka (3 Beit Haeshel Street), shawarma is cooked to order and comes with just about every topping imaginable, including some excellent tahini paste.

In Jerusalem, foodies focus on local, fresh produce and as a result, the capital has plenty of interesting places to lunch. Best of all is the bustling Machane Yehuda market, a short walk from central Jerusalem, where you can spend a morning filling up on little bits of halva (sweet confections), salty goat’s cheese and tangy freshly squeezed lemon juice. 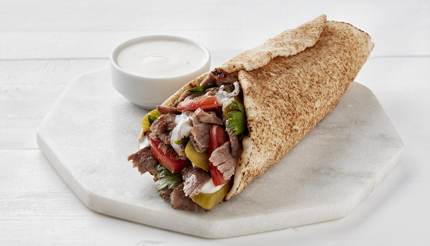 After lunch, head further into the city for a little retail therapy. Along with the inevitable tourist outlets, central Jerusalem is home to the Mamilla Mall, a small, sunken street of open-air boutiques that was built on top of what was the green line between Israeli and Jordanian Jerusalem. The Old City itself is home to a sprawling bazaar, much of which is concentrated in the Arab and Christian quarters. Expect plenty of religion-themed souvenirs, along with pomegranate juice traders.

By contrast, Tel Aviv doesn’t do bazaars. Instead, it does neat boutiques (the Neve Tzedek neighbourhood is best if you’re in the market for luxury labels) and quirky markets, among them the excellent Nachlat Binyamin craft fair which takes place on Tuesdays and Fridays. Here you’ll find everything from handmade Dead Sea mud soap to beautiful handmade jewellery. It’s also close to the busy Carmel food market should you fancy a snack. 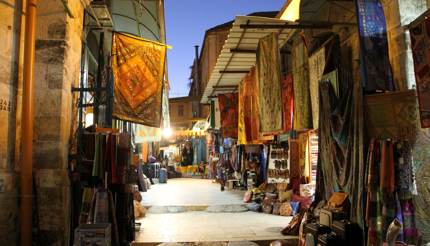 Tel Aviv truly comes alive once the sun goes down. With everything from kosher nightclubs to old-fashioned Georgian bars, there’s certainly no shortage of choice, although for more low-key evenings, beach front is best.

The night scene thrives in Jerusalem as well. Dublin Irish Pub (4 Shamai Street) and HaTza’atzua (6 Dhu Nuwas Street) offer excellent ales and cocktails. After a few pints, head to King David’s Citadel and enjoy the spectacular light show – it is an amazing way to end your day in the Israeli capital. 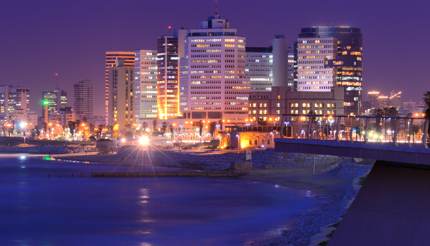