Join the High Society at the Rijksmuseum 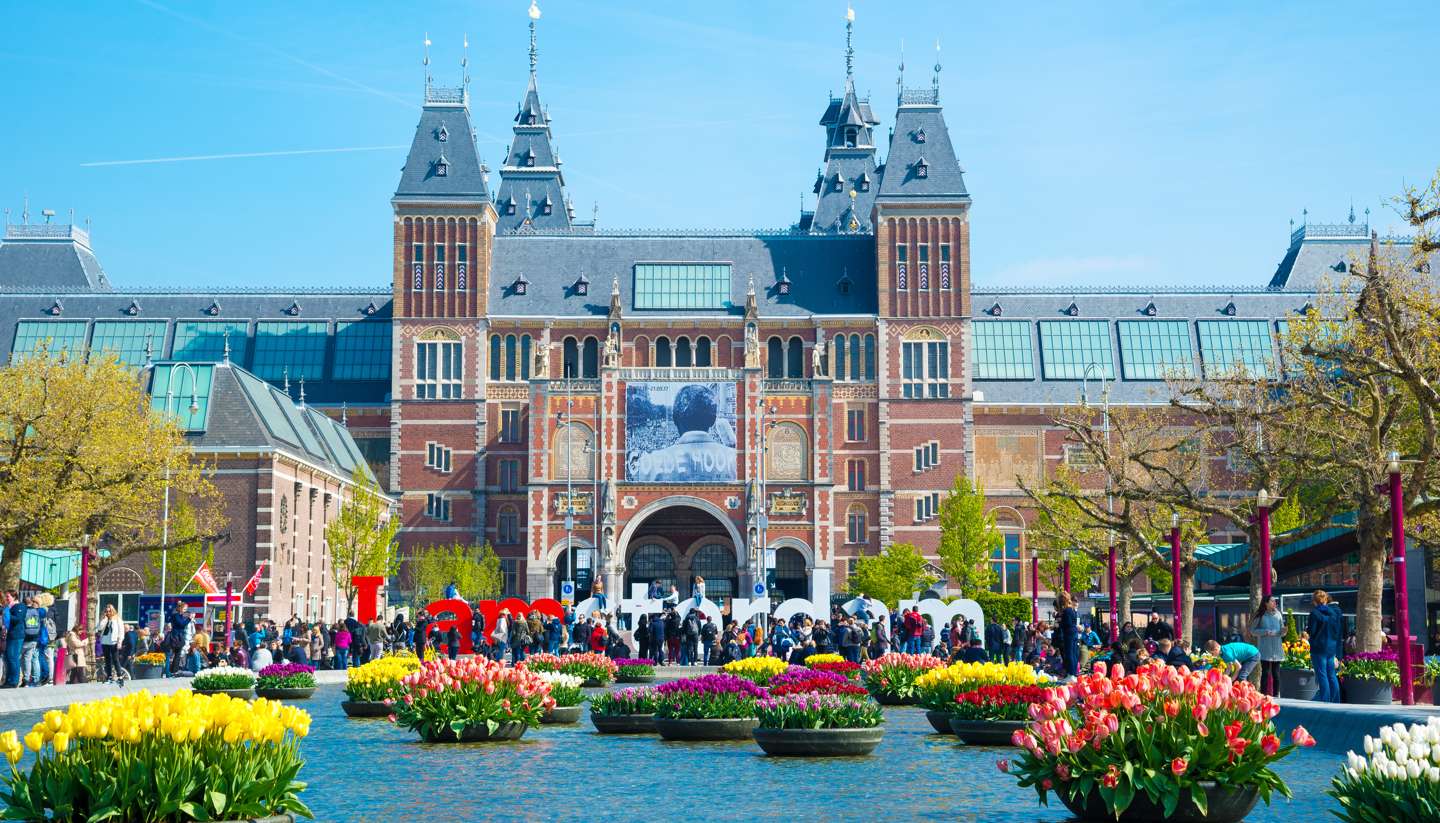 With the Rijksmuseum’s High Society exhibition recently opened to the public on March 8, Zahia Siab gives us a sneak peak of what to expect

Amsterdam is a tourist’s dream. Often dubbed the Venice of the North, its endless canals, quaint cobbled streets, skinny houses and rich history entice millions of visitors every year. Then there is the nightlife offering legal highs and sexual liberties, which probably has something to do with Amsterdam’s ever-increasing popularity as a top European destination. This year, however, there’s one more reason for tourists to visit this multicultural city: the Rijksmuseum’s highly anticipated High Society exhibition on display from March 8 to June 3, 2018.

Before the advent of photography, the elite used portraiture to communicate their ‘high society’ status. Not only did hiring a painter prove that a person could afford expensive luxuries, but it also allowed the aristocracy to fashion their identities through artistic portrayal. The sheer size of the works is both breath-taking and imposing, as famous masters depict the sitters in extravagant clothing and poised positions meant to reinforce their upper-class origins. So, while the exhibition ranges from Middle Age to late 19th-century portraiture styles, the emphasis on ‘high society’ remains constant – these aristocrats wanted their elite status to be commemorated and coveted.

I visited Amsterdam to experience the exhibition before its public unveiling. I met Jonathan Bikker, the exhibition’s curator, in the Rijksmuseum’s vaulted entrance hall amidst the rabble of international voices. Bikker’s enthusiasm for the exhibition was infectious. As we waited for our chaperone to let us in through the locked and alarmed doors, he couldn’t help but gush about his latest project.

Bikker’s plan for High Society was to create a unique exhibition, the first of its kind, which incorporates portraits of a specific art format: the models are all life-size, standing and painted in full-length. Initially reserved for royals and nobles, this art format later extended to members of high society in general. After accepting 36 portraits on loan from 11 different countries – an extremely uncommon feature in most public exhibitions – Bikker amassed 39 spectacular artworks in the same layout with Rembrandt’s famous 1643 portraits of Marten and Oopjen serve as the heralded centre pieces. The exhibition highlights the historical progression of such portraits, how they were popularised and how the fashions were reflected in the paintings’ compositions.

Bikker told me that he originally planned the exhibition around Rembrandt’s two significant portraiture works, Marten and Oopjen, which haven’t been publicly displayed since 1956. Major restoration work, beginning in September 2016 and just recently completed, has revived Rembrandt’s brilliant brush strokes. As we entered the deserted gallery, a film explaining the lengthy but rewarding process automatically played. The sound reverberating throughout the hall served as a delightful reminder that we three were the only people exploring these rooms.

Catherine, Countess of Mecklenburg, on loan from Gemäldegalerie Alte Meister

High Society begins with Lucas Cranach’s classical double portrait: Henry the Pious, Duke of Saxony and his wife Catharina, Countess of Mecklenburg. Painted in 1514 in Germany, these are the first examples of life-size, standing, full-length portraits found in the art world. Now hung as two separate pieces, Bikker showed me that the two figures originally stood in a single painting. The point of Henry’s sword can be seen in Catharina’s painting – it has been subsequently painted over, but a faint shadow remains. 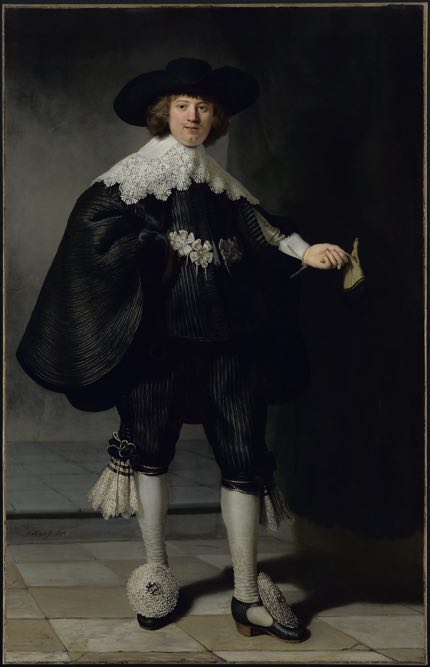 The first Italian couple presented in this format is Count Iseppo da Porto Thiene, standing with his son Leonida, and his wife Livia, standing with their daughter Porzia, painted by Paolo Veronese in 1552. Owned by galleries in Florence, Italy and Baltimore, USA respectively, Count Iseppo and Livia have hung apart for centuries. Their appearance here as a pair is quite a momentous occasion. Interestingly, the joint portraits are the exhibition’s only paintings that depict children. Veronese’s posing of the figures – both children affectionately cling to their parents who lovingly embrace them in return – clearly emphasises a strong familial bond. Livia also points to her stomach as a way of revealing another pregnancy.

Further paintings of note include Velázquez’s portrait of Don Pedro de Barberana, painted between 1631 and 1633, Manet’s 1875 portrait of artist Marcellin Desboutin and Edvard Munch’s portrait of politician Walther Rathenau, painted in 1907. These three works hang together in the same room, reiterating the use of life-size, standing, full-length portraits as accessible to the wealthy masses rather than just monarchs.

The last painting in the collection is Kees van Dongen’s 1931 portrait of the writer Anna, comtesse de Noailles. Van Dongen’s avant-garde experimentation with form and colour clearly dominates this portrait, making it the perfect piece to end the exhibition. After WWI, paintings following this format were no longer fashionable, primarily because they were too expensive to commission, but for a handful of upper-class individuals, such as the comtesse de Noailles, they remained the epitome of high society. 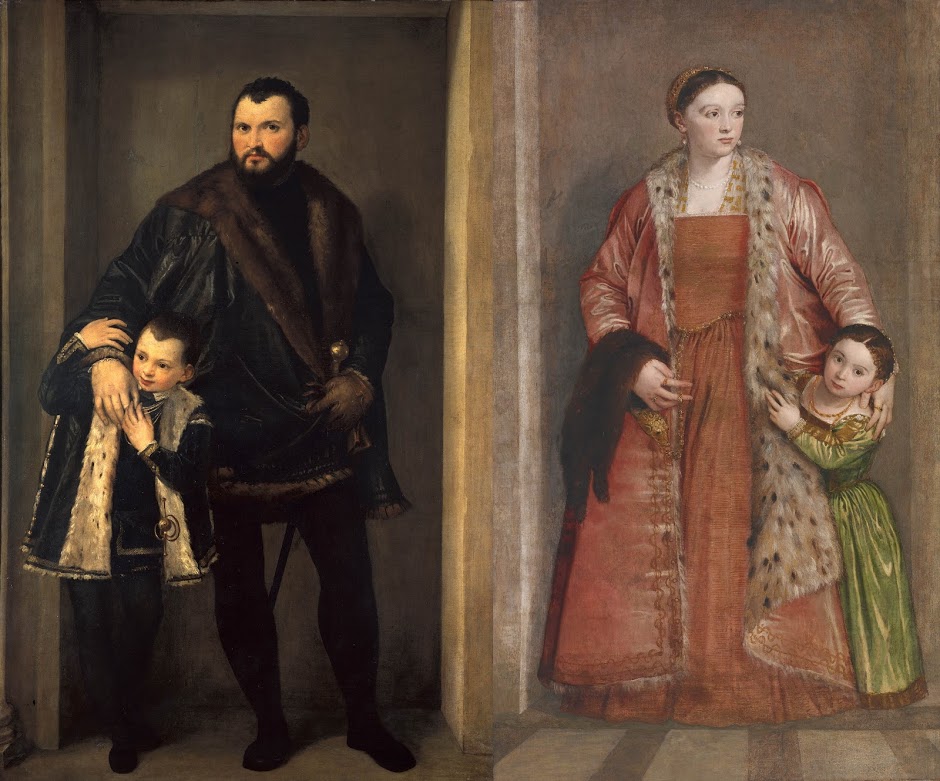 After seeing the exhibition for myself, it is Rembrandt’s Marten and Oopjen portraits that prove the stars of the show. Painted by Rembrandt van Rijn to commemorate the first anniversary of their 1634 marriage, the pair stands tall and proud in their black wedding attire. Since dyeing cloth black was an expensive process, this visual signifier touts the couple’s wealth. Bikker pointed out that by hiring Rembrandt’s services, Marten and Oopjen are emphasising their belonging to Dutch high society, reinforcing the idea that such portraits were not just for royals but could present the majesty of commoners – albeit very rich ones – too.

If Amsterdam has always been on your travel bucket list, head there sooner rather than later to catch the Rijksmuseum’s High Society exhibition. A trailblazing display, High Society showcases full-length portraiture in a way that brings new context to elite society. It demonstrates the adaptability of this life-size art format and reveals the style’s various functions, whether representing political and social status or announcing new and important familial alliances.

High Society is at the Rijksmuseum in Amsterdam from March 8 to June 3.

Many airlines fly to Amsterdam from the UK including British Airways, Cityjet, easyJet, FlyBE, KLM and Iberia. From the USA, Delta, KLM, Lufthansa and United offer non-stop flights from New York to Amsterdam.