Kazakhstan, a mesmerising fusion of east and west 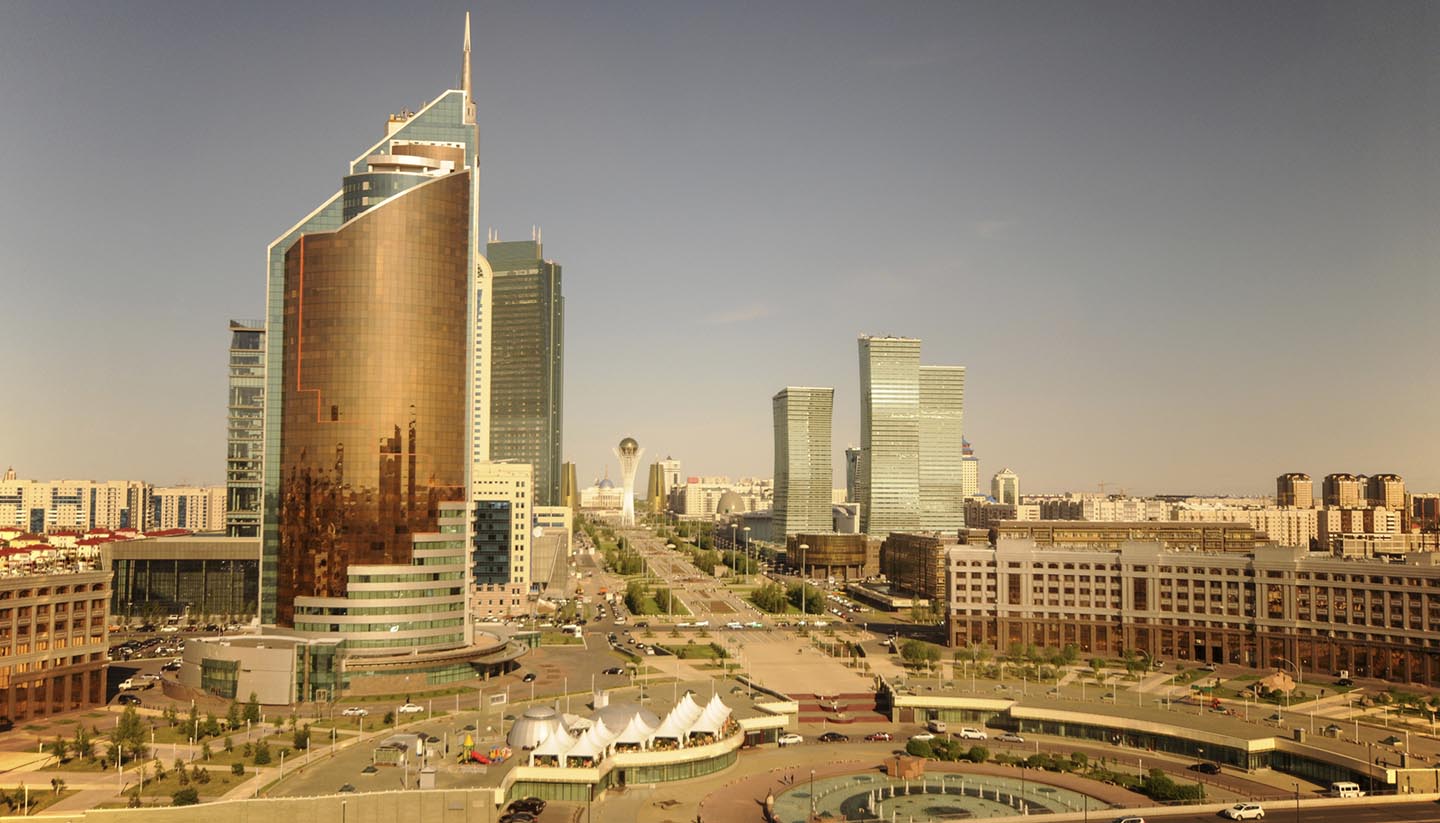 The former Soviet Republic of Kazakhstan is today stepping boldly into the future, its space age capital emerging from large swathes of land still virtually untouched by tourism, as Gilly Pickup discovers.

From the window of the aeroplane, I could see nothing besides endless flat plains stretching out into who-knows-where. Just as I began to ponder on the prospect of never seeing civilisation again, a startlingly modern city boldly appeared out of the barren steppe with no introduction: all wide highways and strangely shaped buildings, some poking the sky. 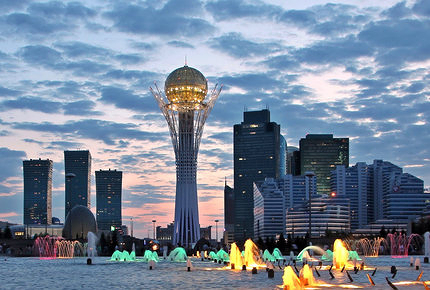 A city of fantastical structures

We had arrived in Astana, the purpose-built capital of Kazakhstan since 1997 (in the local language, ‘Astana’ means ‘capital’) and one of the fastest growing cities in the world. Since the discovery of vast gas and oil reserves, this land-locked country the size of Western Europe has emerged from the Soviet era with aspirational aplomb, its newfound wealth most evident in the fantastical structures that abound here.

Locals have nicknames for some of the crazier buildings – a bright yellow office tower is “the banana”, and a circular blue building is “the dog bowl”; one monument, Baiterek Tower, was designed by the president himself, Nursultan Nazarbayev and has become an emblem of the city.

Many have been created by some of the world’s leading architects: the Khan Shatyr shopping mall and entertainment centre (the word ‘Shatyr’ means ‘tent’ in Kazakh) by the British architect Norman Foster is a tented affair resembling a giant, transparent wonky cone. There’s even a beach club on the top floor with water slides, tropical plants, a volleyball court, loungers and imported sand – as a beach is rather a luxury in a landlocked country such as this, it’s always busy. 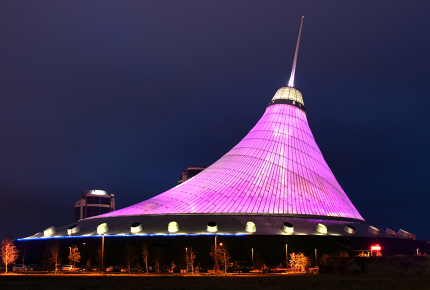 Another of Foster’s works is the futuristic, pyramid-shaped Palace of Peace and Reconciliation, home to an opera house and museum. Because Astana’s temperature ranges from a blistering 35 degrees plus in summer to an ultra-shivery minus 40 degrees in winter, two sides of the pyramid are on roller bearings to allow for contraction and expansion.

Although most people would be hard-pressed to identify Kazakhstan on a map (so you know, its bordered by Russia, China and some of the other ‘stans’ including Kyrgyzstan, Uzbekistan and a bit of Turkmenistan) this is set to change.

One of the largest expositions of the decade is taking place in Astana next year: Expo 2017, the first to be held in Central Asia and an event that will attract up to five million visitors. Even the theme is forward thinking: the objective is to develop the knowledge to control energy consumption in the future and minimise environmental damage. These days, young entrepreneurs benefit from the country’s independence from Soviet rule by running their own businesses and all children learn English at school. 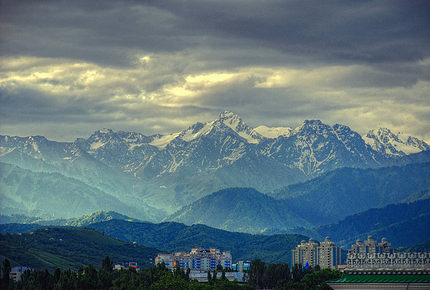 Almaty is framed by the snow-capped peaks of the Zailysky-Alatau mountains,Irene2005/ Flickr

Birthplace of the apple

I had started my visit to Kazakhstan in Almaty, erstwhile capital, cultural and financial centre, and the country’s only other significant city. Prettily framed by the snow-capped peaks of the Zailysky-Alatau mountains, this pleasant, cosmopolitan metropolis intersected with broad, tree-lined boulevards has an almost European feel.

The historic centre has clusters of merchant houses interspersed with a glut of old churches and is the location of the Green Bazaar, a hive of activity bustling with shoppers from morning until night. A dizzying array of foodstuffs is piled high, and ranges from aromatic spices and smelly cheeses to medicinal herbs and glossy, slightly honey-flavoured wild apples. Apples – and tulips too – originated in Kazakhstan. Vendors are friendly and like to offer generous samples for visitors to try, but when I tried to take a photo, my guide hurriedly explained that photography in here is forbidden, a legacy from the days of Soviet rule. 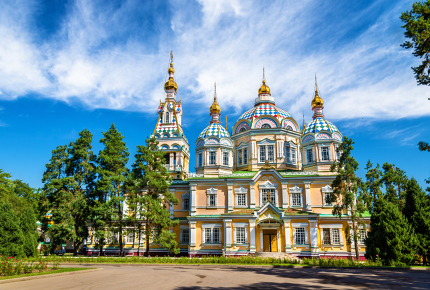 Almaty has another claim to fame in the shape of its tall, all-wooden Russian Orthodox Ascension Cathedral. It’s one of the world’s tallest wooden cathedrals, a colourful showstopper located in the leafy surroundings of Panfilov Park. Going inside is like entering a kaleidoscope, with light pouring in from all around through the stained glass windows in magnificent technicolour.

The park itself is home to a Soviet-style war memorial with an eternal flame in memory of a regiment of Kazakh soldiers who fought to defend Moscow in World War 11. Rather bizarrely, this is a popular venue for wedding party photo shoots and in fact a glamorous crowd feting an equally glam bride and groom were posing for photos when I visited. 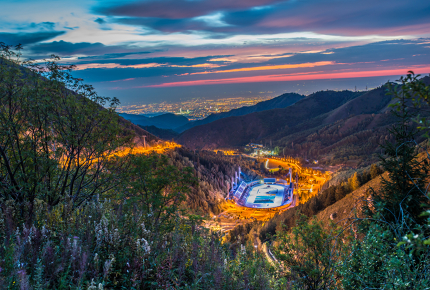 But what does the surrounding area have to offer? My guide insisted I visit the Medeo, around 15km from town. This outdoor Olympic-sized speed skating rink is perched some 1,691 metres above sea level, making it the world’s highest. From here, gondolas trundle up the slopes to Shymbulak, the country’s largest ski resort – the ski season here lasts from mid November to April. It’s a pleasant 20-minute ride with far-reaching views, though if you don’t like heights it may be wise not to look down.

A restaurant called ‘Chalet’ with mountain vistas proved a great place to mellow out al fresco in the thin sunlight while eating lunch of thick and creamy lentil soup and a huge Caesar salad (The country’s specialty is beshbarmak, boiled horse or lamb, and kumiss, fermented mare’s milk, but the country’s multicultural history means that dishes from European, Russian and Uzbek cuisines are also on offer). 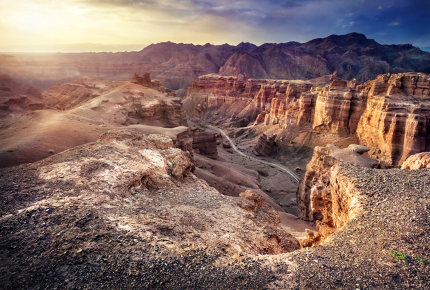 The splendour of Charyn Canyonbyheaven/ Thinkstock

The intrepid traveller should set out into the countryside, where nature reserves, lakes and historical sites litter the landscape and the amazing wildlife includes ibex, argali sheep, golden eagles and saiga, a small breed of antelope. Astonishing off the beaten track sights include the ‘Valley of Balls’, near the town of Shetpe in Western Kazakhstan, an area strewn with hundreds of spherical mysteries of varying sizes which arrived on earth who knows how and which are believed to be anything up to 180 million years old – even now, scientists are baffled by the phenomenon.

Another unmissable sight is Charyn Canyon, located in Charyn National Park, 3 hours drive from Almaty. Known as "The Grand Canyon’s Little Brother" and no less impressive, the canyon consists of 56 miles of red sandstone rock formations. Activities include kayaking and fishing, and there’s every chance you’ll have a friendly encounter with some locals.

That’s not nearly all – there are also ancient underground mosques, evidence of ancient caravan stops and meteorite craters, said by Kazakhs to be mystical places with strange powers. Kazakhstan is a land of secrets still, with large swathes still virtually untouched by tourists and so vast that more than one visit is needed to cover even a small part of it.