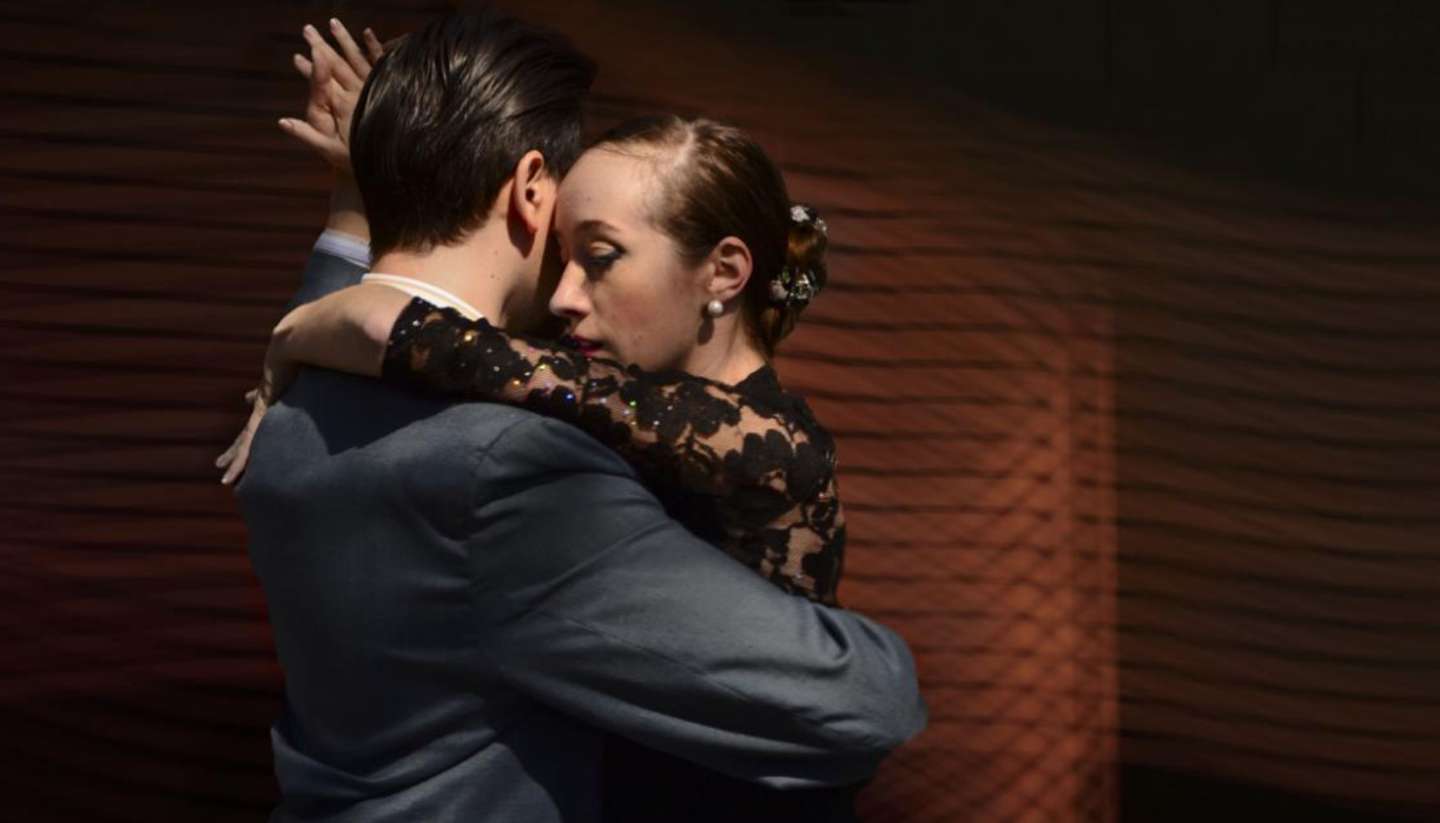 John Malathronas retells the story of Ireland's Rebecca O'Laoire, who went from dancing for pesos on Plaza Dorrego to become one of the best tango artistes in Argentina.

With the apprehension of the first-timer, I step into the dimly lit milonga (tango club) on Avenida Cordoba. Earlier my companion Mariana had struggled to teach me the cuadrado (the basic steps), but for a novice, I didn’t do too badly.

“You are not stiff,” she’d said approvingly, “the British dance like planks.”

Fruto Dulce is more of a seductive cocoon than a swanky lounge and I’m here to complete my schooling in Argentina’s national dance.

Entry is a paltry 60 pesos (£2.85) and drinks are as cheap, although patrons are not interested in quaffing alcohol. The tango is the ultimate intimate entwine with the opposite sex and boozy breath can kill the rapport.

What’s more, the owner is a gringa (female foreigner).

Arriving from Dublin in 2009, Rebecca is a nimble, jovial blonde whose sparkling smile could light up the darkest pampas night.

“I arrived on a six-month working visa to improve my Spanish and to experience the real porteño tango,” she tells me. “Within weeks, someone with a famous surname, Nany Peralta, asked me to be his partner.

“I thought it was all chamuyo, sweet-talk, but no, he insisted, and after three weeks I gave in. Once you start practising as a professional tango couple, it’s all or nothing, so I had no alternative but to stay. It wasn’t such a hard choice, believe me.”

She points at the dancefloor where couples have already started revolving in a grand circle. I watch them follow the rules I’d learned: men never step backwards; they lead their partners anticlockwise; the pairs move at exactly the right pace so that they don’t bump into each other.

I ask Rebecca what she finds so irresistible about tango. “I knew the steps before, but it’s only here I felt the tango embrace. You can have an amazing relationship in an embrace during a dance. You feel that you share a deeper connection with your partner.

“Occasionally you can have an intoxicating moment, as if one was reaching into the private soul of the other, but respectfully. You could feel as if in love for those three minutes of each tango, but then you separate and you may choose to have a polite conversation, or say nothing and preserve the feeling.”

I also observe the unwritten code of the cabeceo. A man stares at a woman. If she looks away, she doesn’t want him as a partner. If her eyes respond, he approaches her slowly, making sure he won’t be embarrassed by a rejection, and, finally, asks her to dance.

“During my first year I worked and saved,” Rebecca says, “but the currency devalued so much, when I came to use my pesos they were worth only one-third of what I originally had. When I danced in San Telmo, the coffee was 9 pesos (£0.42) and a 5-peso (£0.24) tip was worth something. Not anymore.”

She hesitates. “You could say I was trapped but, honestly, I never felt that way. Nany and I did exhibitions and tours, but my income was never guaranteed. Here, we’re used to having to adapt, improvise and flow without being consumed by worry. The economy has always been unpredictable so I had to figure out different ways of earning money.”

She nods. “It’s a pity for the good young dancers nowadays who accept such low wages in the tango scene – I’d never call it an industry. Some put up with intolerable conditions rather than respect their profession.”

It was respect that Rebecca wanted in 2011 when she and two other dancers sued the organisers of the city’s Metropolitano contest that chooses who will represent the city in the World Championships.

Against the competition’s own rules, she wasn’t allowed to represent Buenos Aires as a non-Argentine – a clear case of discrimination.

The lawsuit inflamed passions. There were those who couldn’t accept that a foreigner could possibly grasp the emotion of the dance, while others complained that gringos could afford the best teachers. The judge originally found in her favour, but then strings were pulled.

“The rules were changed,” says Rebecca. “Only Argentines from Buenos Aires can now enter in the regular competition, while a new category for the rest of the world was introduced. This means that anyone fresh off the aircraft can participate; residence doesn’t matter. It was like spitting on the face of foreigners who were part of the Buenos Aires tango family.”

She points at Julio, a svelte octogenarian dapper in a white suit, as he walks up to a Taiwanese girl young enough to be his granddaughter. She readily accepts his invitation to dance. Tango is a greater leveller than death himself.

I ask why so many come to Buenos Aires and stay.

“Yesterday I was a tour guide to a US couple. We did a tango class, drank mate and went to three milongas that offer different flavours of tango,” she says, “they were astonished at the richness of the porteño culture.”

She’s now in full flood. “Things here go wrong all the time. There are power cuts that last for days. It’s all a quilombo, a confusion, but you take it as it comes. Maybe your savings will disappear but the personal friendships will last. People are more open and honest; they don’t put on an act or hide their emotions. We structure life differently here and the importance is on people rather on material things.”

All this time and I still haven’t left my chair, glued by a combination of trepidation and embarrassment. By now most people have left and I dare pop the question.

“May I have this last dance?” I ask Rebecca.