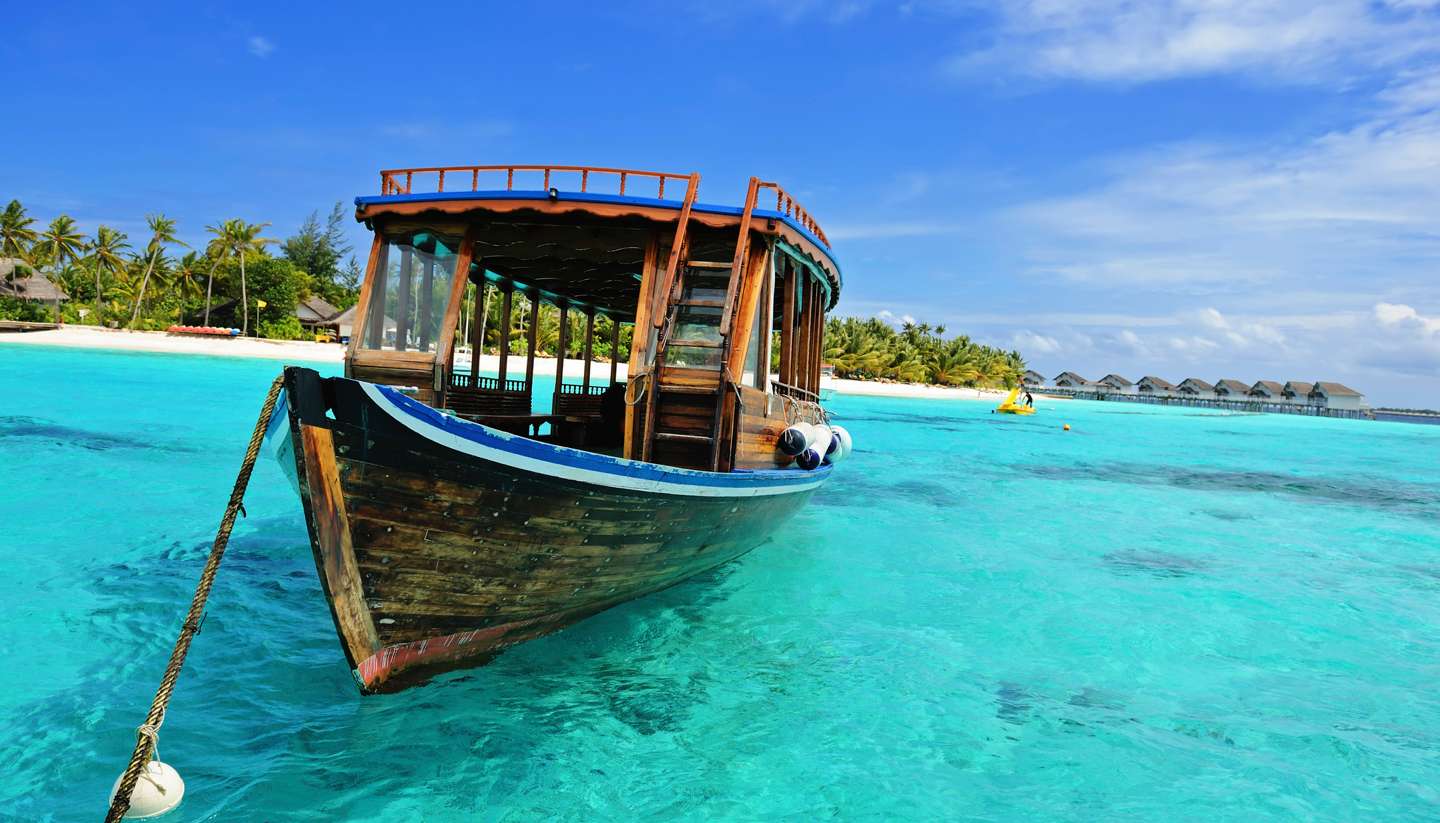 As the Maldives welcomes tourism to its inhabited islands, Heidi Fuller-Love embraces the invitation, island hops and meets locals in three remote islands

My tailbone squeals as the tatty speedboat bucks and thumps us over the waves to Maafushi in the Kaafu Atoll. Used to this brutal form of transport, Mohammed lounges on the bench next to me humming a song dedicated to Al-Sultan Ghazi Muhammad Bodu Thakurufaanu, the sea captain who liberated The Maldives from Portuguese conquerors in 1573.

I’ve been to many exotic destinations, but I often felt that they’d been over-hyped. The Maldives, however, are as good as in the brochures; the water beneath our boat shimmers clear as turquoise glass as we bump across the waves, past tiny islands set in the sparkling sea like green egg yolks surrounded by the blue-white waters of their coral lagoons. “Most people come here for the diving – it’s the best in the world,” says Mohammed, whom I met while waiting in line to take this ferry to his island.

Although tourists began to visit the Maldives in the early 1970s, travellers were only allowed to stay on the resort islands, and the only Maldivians they encountered would be cleaning their rooms, or serving them dinner. Luckily, a few years ago, ex-President Mohamed Nasheed authorised islanders to open guesthouses. Nowadays it’s possible to live like a local in the Maldives and pay money directly to the people who live here. Unlike ‘most people’ who make a beeline for the luxury resorts, I’ve come to the Maldives to visit some of the lesser known islands and meet locals like Mohammed. 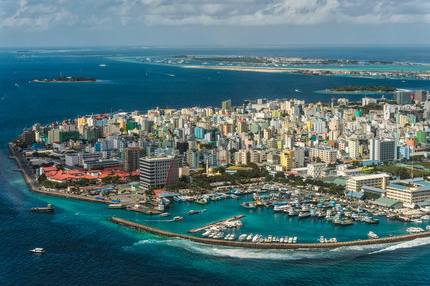 Male, the capital of the Maldivesniromaks/Thinkstock

I arrived at Velana International Airport the day before. It was a hot June afternoon, humidity was fierce, and my clothes were soaked with sweat by the time I hopped aboard the traditional wooden dhoni boat that chugged me over to Malé. Traditionally known as the King’s island, because it was the seat of the dynasties that ruled here for centuries, few tourists bother to spend time in the capital of the Republic of the Maldives and yet this tiny city, which measures only one square mile, is well worth a visit.

I wandered through narrow streets lined with trees that were heavy with lumpy black growths that turned out to be fruit bats, flapping overhead as I walked. In another bustling street, I entered a shop decorated with balloons and tinsel garlands and discovered dozens of excited children whose parents welcomed me with sticky fried banana cake and invited me to join their circumcision party. Later I saw the little boy who was circumcised sitting pale, but proud, in his bed surrounded by presents.

After a peaceful night in The Beehive, a modern hotel with a good restaurant in back streets not far from the lively Malé Fish Market, I headed for the Villingili Ferry Terminal. Before taking the South Kaafu Atoll ferry, however, I withdrew a week’s supply of cash from the ATM as The Beehive’s helpful receptionist warned me that not all islands have cash machines. I also bought a long skirt to hide my knees and a shawl to cover shoulders, before travelling to these traditional Muslim islands, where alcohol and pork are banned. 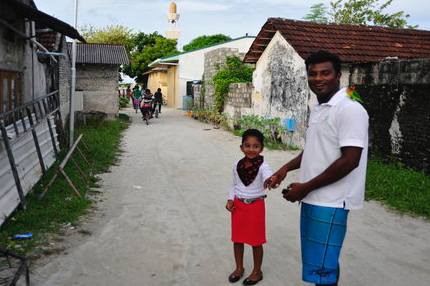 I meet Mohammed on the two-hour ferry trip to Maafushi. I expect to see traces of the tsunami that badly damaged this southern island in 2004, but Mohammed tells me that guesthouses that were opened here in 2010, providing valuable income that helped islanders rebuild, and nowadays Maafushi is bustling and prosperous with a scattering of souvenir shops and more than 30 guesthouses.

Mohammed is proud to welcome me to his island and insists on accompanying me to The Holiday Lodge, where I’m staying. Loading my luggage into the hotel’s bright painted wheelbarrow, he pads ahead of me along a sandy track fringed by brightly painted tin roof houses. I’m expecting islanders to be suspicious or hostile, but they smile and greet me with haalu kihineh, the breathy informal Maldivian word for ‘hello’. I ask Mohammed if he worries that tourism will alter his island. He grins broadly. “Tourism is a wonderful thing for us. Before now, we had to always work on the resort islands and far from our families. Now with the guesthouses, we can all hope one day to be able to live all year with our wives and children.” 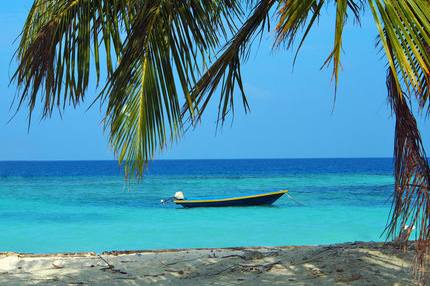 
I spend four days in Maafushi: exploring the rocky paths of this mile-long atoll; relaxing on the Bikini beach, a dazzlingly beautiful stretch of palm tree studded shoreline hidden behind a wooden fence where tourists can sunbathe without offending islanders or lounge in one of the surprisingly comfortable Maldivian steel framed joali hammocks that line the unpaved streets.

A two-hour ferry trip from Maafushi takes me to Fulidhoo in the Vaavu Atoll, where I’m met by the owner of Thundi, one of the island’s two guesthouses. There are only five other tourists on the island. We get to know each other as we laze on Fulidhoo’s powder-white, near-deserted Bikini beach or duck out of occasional rain showers to order Hedhikaa ‘short eats’ – the delicious local snacks that include spicy titbits made with fried coconut, and rich fish curries served with roshi bread, in one of the islands three restaurants. “It was incredibly difficult to find out how to visit the Maldives as a solo female, but I’m really glad I made the effort,” Lana, one of the other travellers, confides. “People are really welcoming here, and I couldn’t have afforded to come here otherwise.” 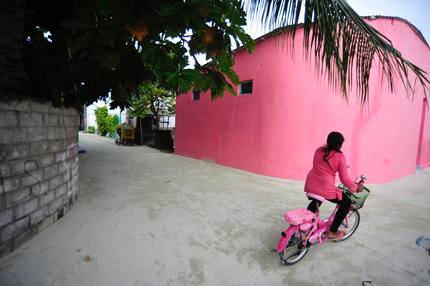 Thinadoo Island, capital of Gaafu Dhaalu Atoll and the next stop from Fulidhoo on the ferry, is my final destination. In 1962 the islanders’ homes were destroyed and many of them were killed on the orders of Prime Minister Ibrahim Nasir to wipe out a separatist movement that had its roots here. Despite its tragic history, Thinadoo is a busy, happy island with mosques, schools and pristine beaches where I watch young boys playing football. “It was a bad time in our island’s history, and we will never forget, but at least our children now have some hope of a better life with tourism,” one of the islanders tells me.

After ten days island hopping, I end my trip at a luxury beach resort close to the fish teeming Dhonakulhi reef. My over-water villa with plunge pool is sumptuous; there is caviar and champagne served by my own butler, and the beaches are stunning, but meeting locals and supporting local businesses felt like a far more authentic experience.