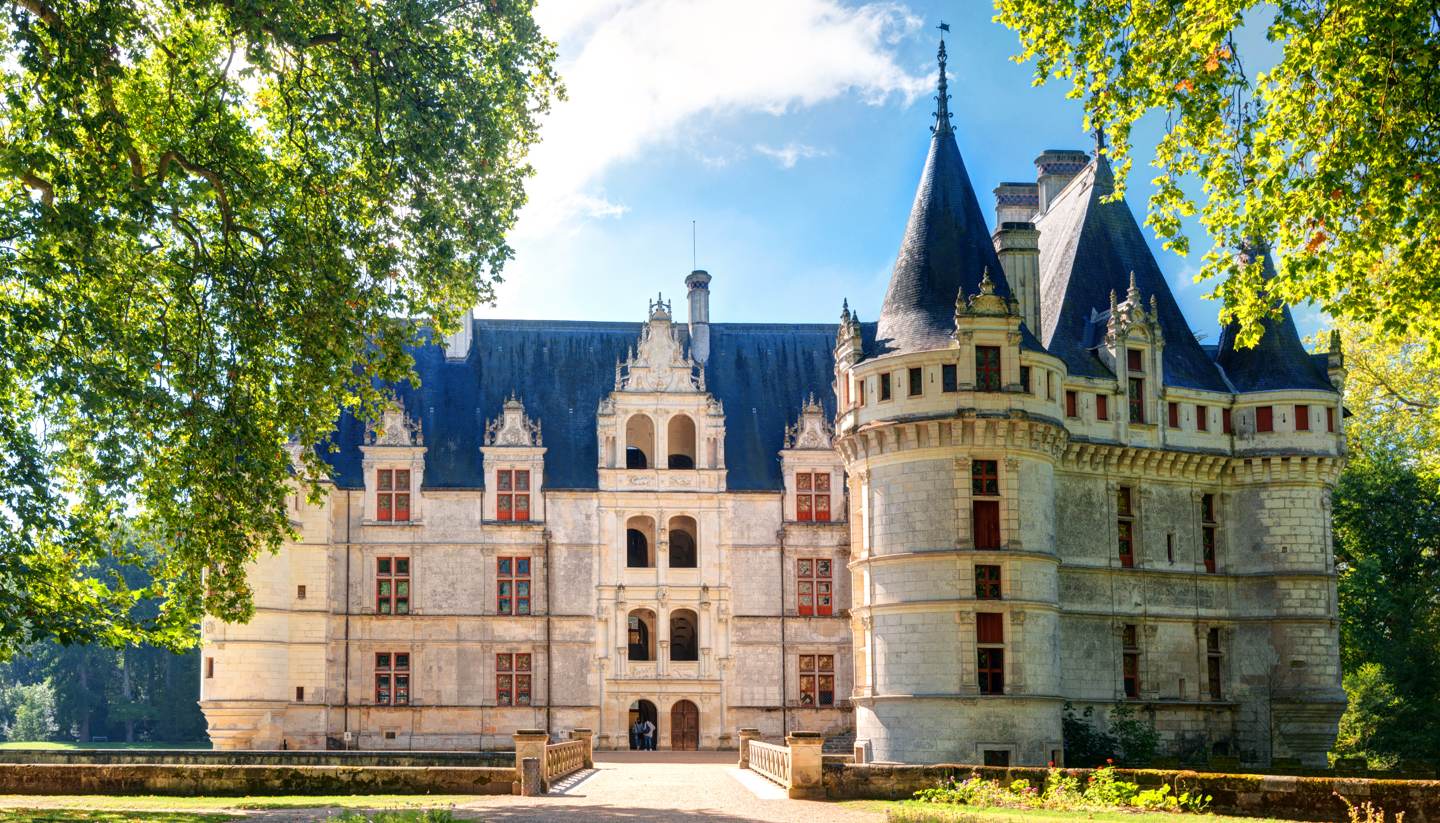 The serene Loire Valley covers a large part of central France stretching from Briare in the east to Saint-Nazaire in the west. A region famous for its wine, it also has a good number of fairy-tale castles dotted across its towns, one of which was the residence of Italian artist Leonardo da Vinci, the great artist who gave us Mona Lisa and The Last Supper, among many other iconic works.

2019 marks the 500th anniversary of the death of Leonardo da Vinci in the Loire Valley, which is also widely said to be the birthplace of the French Renaissance.

Located along the central banks of the Loire River, Loire Valley has been a crucial hub for French cultural development for thousands of years. It’s often referred to as the Cradle of the French and the Garden of France because of its abundant vineyards, orchards, and vegetable fields. However, the Loire Valley is arguably most notable for its architecture during the French Renaissance (1494-1610). 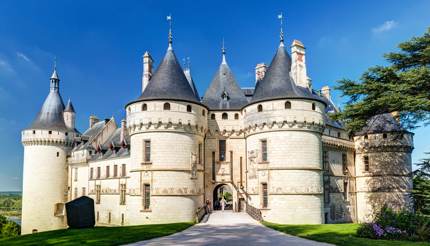 The French Renaissance, an artistic and cultural countrywide movement, began in 1494 when, under Charles VIII, the French invaded Italy. The Renaissance – meaning rebirth – saw France flourish with developments in art, architecture, science and literature. Most notable of these was the idea of humanism, which focuses on the value and abilities of people and praises critical thinking and independent thought. Much of the ensuing art had strong Italian and Flemish influence.

The Loire Valley’s role in the French Renaissance

The Loire Valley boomed with architectural developments during the Renaissance, which can be seen in the building style of its many châteaux. Throughout 2019, the region’s “500 Years of Renaissance” celebration commemorates three crucial events in 1519: Leonardo da Vinci’s death, Queen Catherine de Medici’s birth, and construction of the Château de Chambord.

Each château has contributed to the Renaissance in its own way. From Château du Clos Luce serving as the residence of Leonardo da Vinci during his final years, to Château du Chambord jumpstarting Renaissance architecture, every château is celebrating differently, based on its contribution to one of the greatest art movements of the modern era. Here’s how eight of the most popular châteaux are celebrating in 2019.

Construction of Chambord, the largest château in the Loire Valley, began in 1519 as the brainchild of King Francis I and Leonardo da Vinci. The most famous Renaissance-era aspect is the spiral staircase, supposedly fashioned into a double-helix based on a design by da Vinci. The design allows two people to walk on opposite sides of the staircase and never make eye contact, and it’s said to be a metaphor for perpetual renewal, a common theme during the Renaissance. Other Renaissance features include the decorative gates and moat and an enclosed park the size of Paris.

To celebrate its 500th birthday, Chambord is hosting an exhibition called “Chambord 1519-2019, Utopia at Work” which brings together the past and future of the château from 26 May to 1 September 2019. It plans to showcase the past with a history of the construction and how it related to da Vinci, and then predict the future by having universities and architecture labs submit their visions for a “reinvented” Chambord. 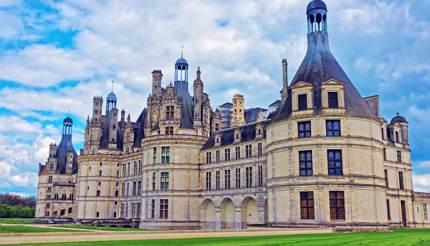 Originally owned by the aristocratic Amboise family, this château was made Renaissance-ready by Charles II d’Amboise, who added ornamental decorations and sculptures to the outside. It later fell into the hands of King Henry II’s mistress, Diane de Poitiers, who added parapet walkways and the Saint Nicolas tower, completing its distinctive look.

The château will be celebrating Catherine de Medici for the anniversary with an exhibition entitled “The Queen’s Tapestries”, where visitors will be able to see life through the eyes of the Valois Queen from September to December 2019.

This château is one of the earliest and most prominent examples of French Renaissance architecture and décor, combining both traditional French and modern Italian styles. It’s built on an island and houses the Renaissance-style bedroom of Philippe Lesbahy, wife of Gilles Berthelot and Treasurer of France under King Louis XII. The décor is in the classic Renaissance style.

The château has taken advantage of its beautiful location when designing its celebration. A sound and light show for visitors will take place in July and August and address the main themes of the Renaissance, including scientific discoveries, humanism, and the artistic revival passed on by Italy. 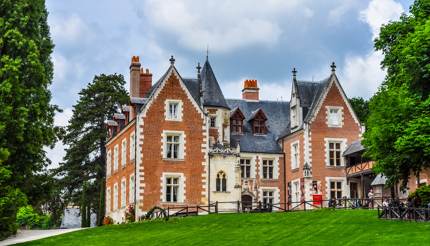 Da Vinci spent his final years in service to Francis I in Château du Clos Lucé. As the official residence of the famed artist, it now contains a reconstruction of his bottega-style studio, a common feature of the Renaissance, which visitors can explore. The outside grounds also have an open-air museum showing his inventions and a garden designed in the spirit of his artwork.

Da Vinci’s former home will be commemorating the artist in September 2019 with the reopening of the “Leonardo da Vinci and France” exhibition showing how his bond with the three French kings he served was one of the founding elements of the Renaissance coming to the Loire Valley.

Other commemorative events include a showing of da Vinci’s Last Supper tapestry on 6 June to 2 September 2019 and a European Festival of Renaissance Music on 29 September.

The childhood home of Francis I and a favourite of many kings, Amboise is connected to Clos Lucé by an underground passageway, an important feature during da Vinci’s time as it allowed for him and Francis I to meet easily. Château d’Amboise also houses da Vinci’s tomb in the Chapel of St. Hubert.

Events remembering the artist’s contribution to the Renaissance include an exhibition called “The Death of Leonardo da Vinci: Construction of a Myth” from 2 May to 31 August 2019 that aims to tell the history of da Vinci and Francis I’s relationship. Other events include public-painting displays by Italian graffiti artist RAVO from 2 April to 2 September and a performance by the Doulce Memoire on 23 July to recreate the festivities of Francis I’s court during the time of da Vinci, many of which da Vinci himself organized. 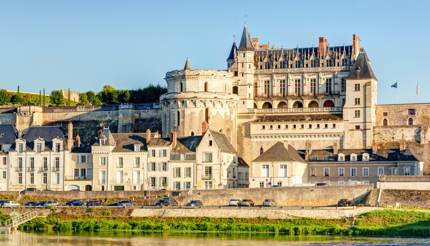 A favourite of great patron of arts Queen Catherine de Medici, Blois was her family home and the backdrop for many of her extravagant parties. Its architecture and her legacy have made it into one of the most powerful symbols of Renaissance art and intellectualism in Loire Valley.

To celebrate the anniversary of Catherine’s birth, the “Children of the Renaissance” exhibition shines a light on how the royal children of Catherine, Anne of Brittany, and Claude of France were raised during the Renaissance. The exhibition talks about pregnancy and birth and life growing up at court. A catalogue for the event further also includes ceremonial aspects, duties of the princes and princesses, and the implications of an infertile queen. Visitors can take in the exhibition from 18 May to 1 September 2019.

Another exhibition, “The (Re)birth of Catherine,” brings the queen and modern women together from May to October with sculptures in her apartment that have all been virtually dressed in fashions of the Renaissance, connecting the past with the present.

One-of-a-kind architecture thanks to Catherine de Medici is the main feature of this château. After taking the residence away from Diane de Poitiers, Catherine had a two-story gallery, the Batiment-des-Domes, installed over the bridge Diane had built.

Chenonceau will celebrate Queen Catherine, often referred to as “France’s greatest king,” beginning in spring 2019 by revamping the garden she added to the château and allowing visitors to explore her apothecary room, which tells the history of both her and the château. 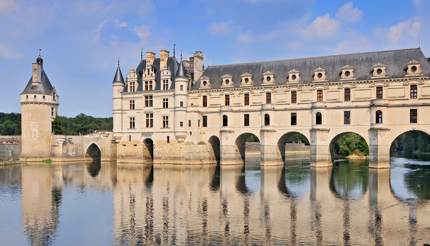 The stables of this château are the prominent Renaissance-era feature. Originally designed for basic functionality during the medieval period, the stables were remodelled in the 16th century for greater aesthetic appeal and value, while still remaining functional as the royal stables.

Da Vinci will be celebrated here via a “Contemporary Tribute to the Renaissance” exhibition from April to November 2019. All manner of his artistic interests will be explored and represented by international artists who have used him as inspiration. The exhibition will also offer some insight into the “Italianism” introduced to the arts during the Renaissance – which still exists to this day – by employing a different da Vinci theme in each room.

With over 500 events running throughout the entirety of 2019 at a variety of châteaus and museums, the Loire Valley’s celebration of the Renaissance is a must for art and history lovers of all kinds.

Before you go, take a look at: