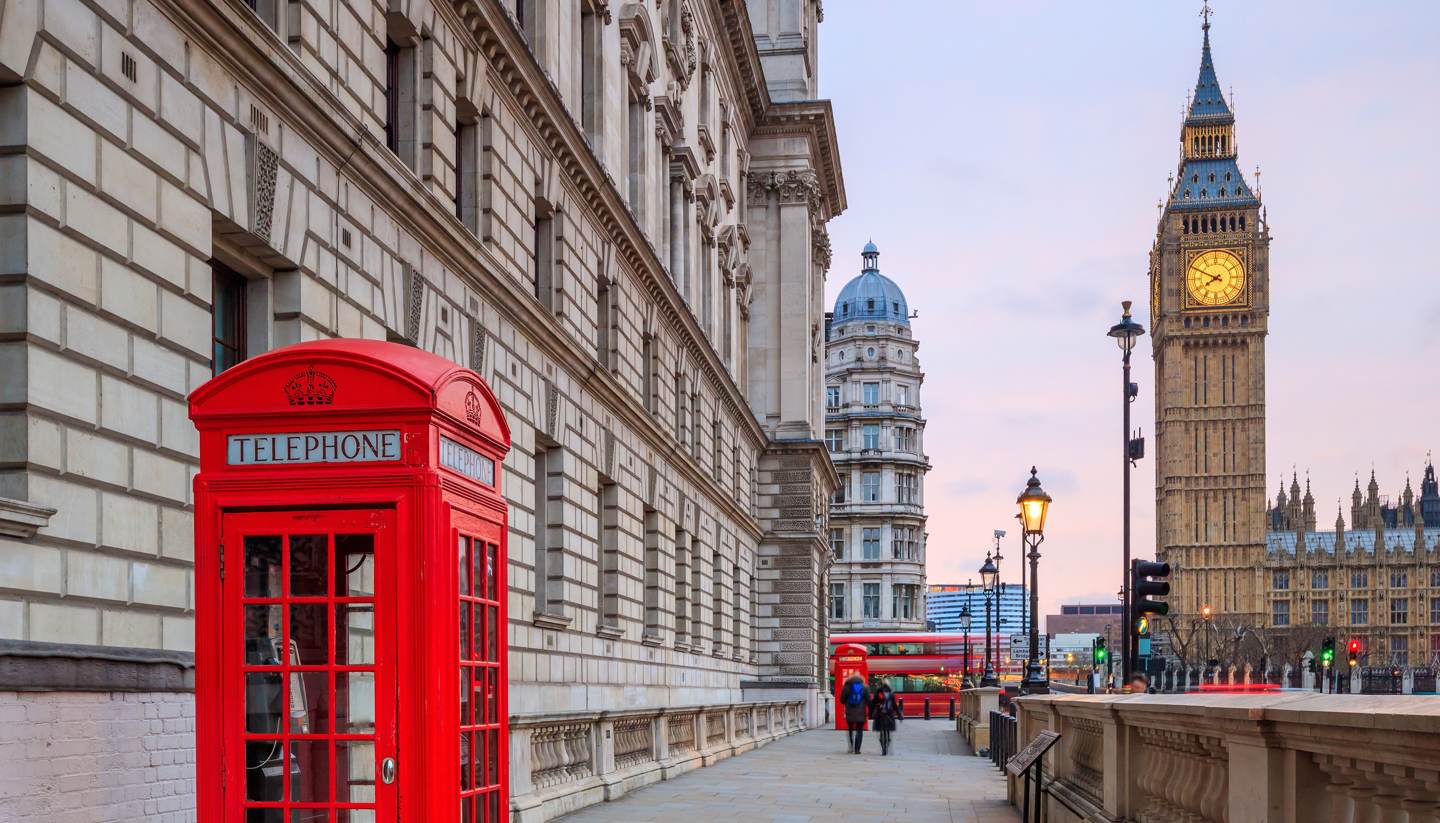 From drinking dens and punch ups to prostitute graveyards and lost works, here are our top 10 secret Shakespearean spots in the city.

1. Read the book that saved Shakespeare

Arguably the most important English language book to have existed, the pages of the First Folio, which can be viewed at the British Library, ensured Shakespeare’s labours weren’t lost forever. As derivative duplicates of the Bard’s plays circulated in the city of London, two of his friends, John Heminge and Henry Condell, collated a true collection of Shakespeare’s work in 1623, with a preface by Ben Jonson. Following Shakespeare’s death, 18 of his plays had not yet been printed, and the First Folio kept masterpieces including Macbeth, Julius Caesar and The Tempest alive.

2. Get barred from the Bard’s boozer

We can’t actually be held accountable if you get slung out of this Southwark saloon, just as we can’t entirely be sure Shakespeare ever supped suds here. But the cosy low ceilings and cobbled yard of The George Inn next to London Bridge are the perfect place to pettifog either point. Living locally, it’s likely that the Bard visited, especially as the venue doubled as an Elizabethan playhouse. He may have even performed onstage.

Peel away from Farringdon station and amble along to St John’s Square for a little known slice of Shakespearean history. The ancient St John’s Gate is impressive enough, but during Shakespeare’s time it is where The Master of the Revels sat. The Revels Office would decide which plays could be performed and what would be censored, so who knows what great works vanished within these very walls?

4. Discover the site of the original Globe

Just across from the remains of The Rose Theatre, the site of the original Globe Theatre can be found, the majority of which is actually lying beneath a Georgian building and Southwark Bridge. Once there, you can see a plaque marking the site where the theatre, built by Shakespeare’s playing company, once stood.

While there, why not also have a look at the remains of the Rose, which was the first purpose-built theatre to stage one of Shakespeare’s plays. In fact, both Henry VI and Titus Andronicus premiered here. Today, plays are still performed at The Rose, close to the stage of the original theatre, along with various events and workshops. 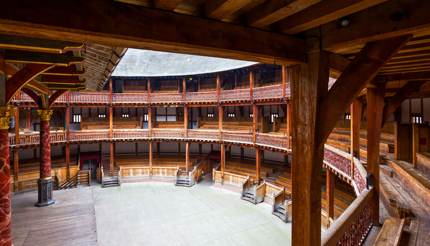 Inside of the Globe theatreGimas / shutterstock

5. The Bard as a bruiser

Today, the Bankside area of London runs from the hubbub of Borough Market to beyond the white-walled reimagining of Shakespeare’s Globe, but back when the Bard was in business it was full of booze, bear-baiting and brawling. Shakespeare, it seems, was involved in the latter when he and three assailants set upon William Waite in Bankside’s medieval streets. Summoned before a judge, the case was settled out of court.

How to visit: Bankside (tel: (020) 7928 3998; www.visitbankside.com is best explored on foot. Start from London Bridge and work your way along to Blackfriars Bridge.

“Thou that givest whores indulgences to sin,” slams the Duke of Gloucester to the Bishop of Winchester in Henry VI – a nod from Shakespeare towards to the Bishop’s control of Southwark’s stews (brothels). Awash with harlots known as Winchester Geese (their nickname came from the wheeze the girls omitted due to venereal disease), one popular prostitution house still stands: The Castle and the Hoop. Now a heaving tourist pub on London’s Bankside called The Anchor, the only stew you’ll find will be on the bar menu.

Also visit the Cross Bones graveyard on Redcross Way. This medieval burial ground was where the Winchester Geese were laid to rest. Today the spot is marked by ribbons and flowers tied to the gates.

London’s stylish Shoreditch area is now brimming with tech heads, trendy taprooms and fashionable design houses, but in the 1500s it was famed for its theatres. As an actor, Shakespeare trod the boards at Britain’s first successful playhouse, The Theatre, which remained undiscovered until very recently. The spot can now be visited at New Inn Broadway, opposite the Amnesty International building. While not much to look at, if theatrical folklore is to be believed, the playhouse was taken down by its owner, Richard Burbage, shipped over the River Thames and re-erected as the original Globe.

How to visit: Head to 4-6 New Inn Broadway in Shoreditch and The Theatre was located in the vacant plot of land opposite Amnesty International. There is also a plaque at 18 Hewett Street commemorating The Curtain Theatre, where Shakespeare is known to have acted too.

Much of the city Shakespeare knew was lost in the Great Fire of London, but some spots still stand. Step up Middle Temple Court on Middle Temple Lane with its perfectly pruned gardens and imposing Elizabethan chamber. Its main hall comes with a double hammer-beam roof and carved wooden screen from the late 1500s, and it was in this very room that the first production of Twelfth Night took place in 1602. Little has changed since and the best way to savour the surroundings is over a weekday lunch in the hall itself.

How to visit: Middle Temple Hall (tel: (020) 7427 4820; www.middletemplehall.org.uk, located on Middle Temple Lane, is open to the public on weekdays from 1000-1200. Guided tours and lunches are also available but must be reserved ahead of a visit. 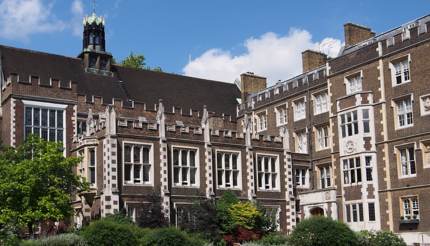 Paddle upstream from the city of London and you’ll find actor David Garrick’s personal shrine to Shakespeare. When he was still alive, Garrick entertained his guests in this classical-style folly filled with Shakespearean relics. Memorabilia included a signet ring, a dagger and a statue of the Bard (now in the British Museum), which Garrick is thought to have posed for himself. Sadly, much of it was auctioned off after his death, but with a sedate riverside setting and a replica of the Shakespeare statue, Garrick’s Temple to Shakespeare is still worth an afternoon of your time.

10. Shakespeare in statues and stained glass

Shakespeare aficionados will already know of the statues at Poet’s Corner and Leicester Square, and possibly even the reclining Bard in the echoes of Southwark Cathedral. Few though head to the Gothic glory of St Helen’s Church in Bishopsgate under the shadow of The Gherkin. This was the Bard’s local parish in the 1590s and records show he failed to cough up his tax here in 1597. A stained-glass window in the church depicts Shakespeare himself, showing the Bard has since been forgiven.