Mbalax and boomboxes: searching for a Senegalese tune in Dakar 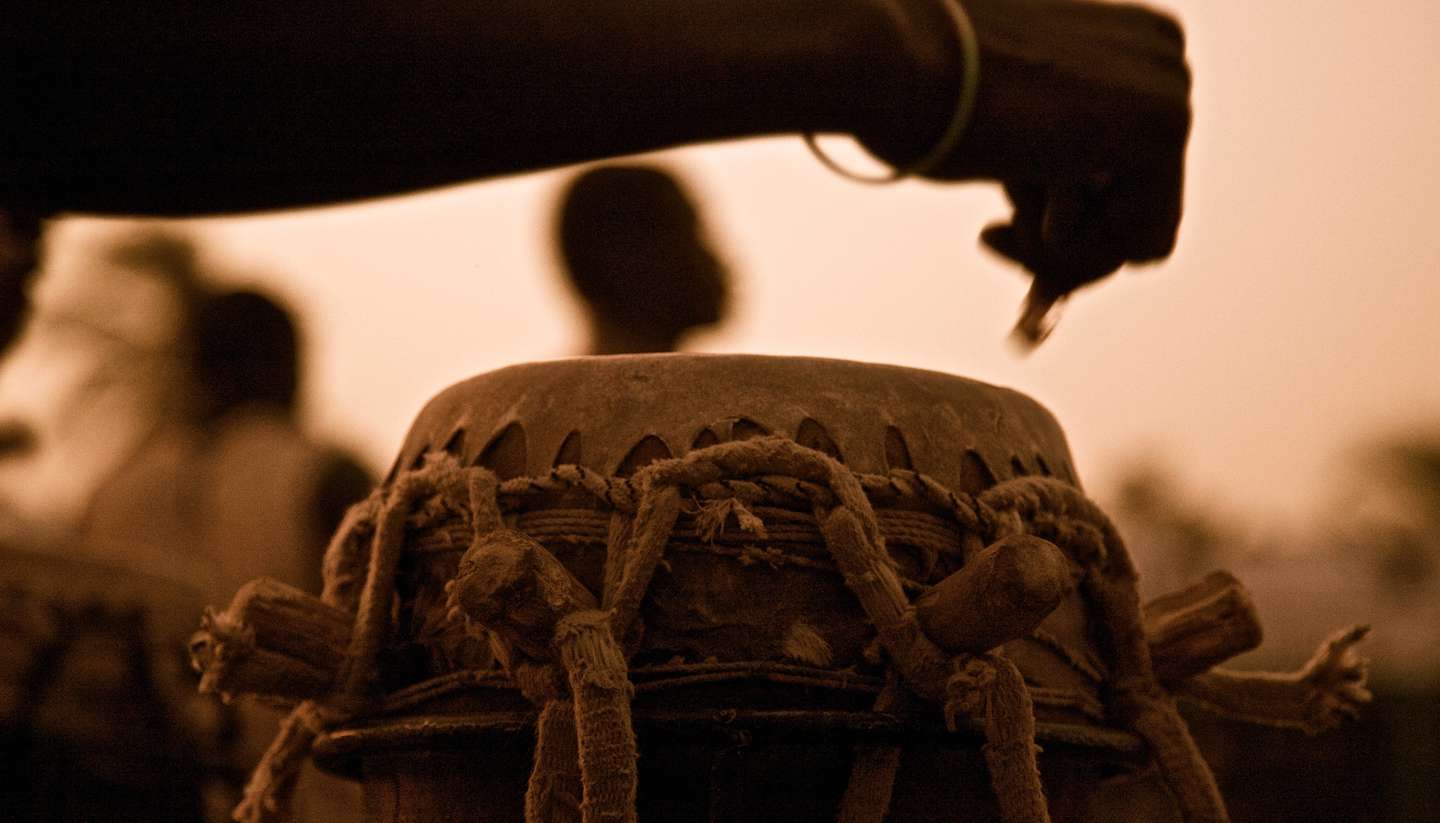 On a trail of musical discovery, Darren Loucaides tries the road less travelled in the Senegalese capital Dakar and learns a valuable lesson in the process.

As a taxi with a broken windscreen hurtles me from Dakar airport, I realise that my high-school French may be beyond salvaging. Then something peeps through the cobwebs: “Les discothèques – très bon!”

So says the until-now-incomprehensible driver as we cruise down a strip of neon-lit nightspots blaring music. Given the traditional kaftan and cap he’s wearing, his enthusiasm for clubbing is a curveball. That’ll show me for making petty assumptions. Besides which, this is Senegal – nothing is clear cut.

When I venture out the next day, the country’s formidable musical reputation seems well earned. In the rough-around-the-edges district of Oukam near where I’m staying, men are fixing cars and loading donkeys while countless boomboxes blast mbalax into the street. This distinctive Senegalese pop genre has produced at least one global star in Youssou N’dour, whose 1994 hit with Neneh Cherry ‘7 Seconds’ was massive in Europe. Although mbalax blends classic West African melodies with contemporary western techniques, it sounds profoundly Senegalese to me.

On approaching the giant African Renaissance Monument, I hear the boom of a more traditional-sounding dance music. At the feet of this 50m-high bronze statue, which stands on a hill with superb views of the city and ocean, an outdoor stage hosts regular concerts and music festivals. Today the music is piped and a troop of girls on stage are practising their moves to the elaborate dance rhythms.

Later, on Mamelles beach, the boys playing football alongside an incoming tide finally abandon their game to gather round a local djembe player. The crowd are soon boogying along to the frantic beat as daylight fails. As I’m the only toubab (westerner) around, everyone insists I join in. I would say I acquitted myself well, but the Journalist’s Creed forbids me to tell an untruth.

Given how much Dakar lives and breathes music, finding the heart of its music scene should be easy.

Back at my hotel I ask whether there are any gigs in the city tonight. “Always!” replies the friendly receptionist. She suggests Just 4 U. I’ve read about this place in more than one guidebook, an “unmissable music venue for both tourists and locals”, but the name puts me off. Just 4 U seems to lie too firmly on the path-well-trodden for my taste.

Another place I read about is Thiossane, which is well known but seems less touristy. It’s famous for its live mbalax nights, especially on Saturdays when owner Youssou Ndour is said to regularly perform. Guess which day it is.

I flag down a taxi. The driver can’t understand my repeated pronunciations of “Thiossane”, but fortunately I’ve written down the name and address on a slip of paper. He squints at this for a long while, until I finally decide to try another taxi. Although the second driver looks similarly bemused, when I open the door to leave he insists he knows where he’s going.

Arabic vocals soar from the stereo. I’m too worried about the car’s violent rattling, however, to pay it much heed. To change gears the driver has to jerk the stick in a peculiar way like trying to unblock a toilet. When he abruptly crosses the dual carriageway to reach a turning on the other side, I thank the heavens that the kerb is the only thing we hit.

After stopping twice to ask for directions, we arrive outside Thiossane. It’s dead. I later learn that the venue has been closed for a while.

Not easily beaten, I search AgenDakar (agendakar.com), which has a full list of daily events, which leads me the Grand National Theatre. This extravagant venue was constructed by a Chinese company in 2011 (the even more extravagant Museum of Black Civilisation is being erected next door by the Shanghai Construction Group). There are several ambassadors and Senegalese elites in the crowd when I arrive, while a good half of the audience is Spanish. That’s because tonight’s performance features Mali’s Toumani Diabeté alongside flamenco band Ketama.

Dating back to the 1980s and birthing two albums under the title Songhai, the collaborative project is famous in Spain. Full disclosure: this is the first time I’ve seen flamenco even though I live in Spain. Hearing frantic Spanish guitars battling Diabeté’s spiralling kora melodies proves to be a very special way of breaking my cherry.

Still, I’m keen for something more down to earth afterwards. Checking AgenDakar again, I end up at Olympique Club for some ‘live music and dinner’ – a typical setup here. The music comes courtesy of Daba, a local singer-songwriter who blends Western-African music with jazz and roots reggae to great effect (soundcloud.com/daba-makourejah). Or so I’ve heard.

When I arrive, there are western club anthems playing. After asking the barman about Daba, he tells me the concert has been cancelled. Disappointed, I ask him where I can see live music tonight. He says Just 4 U. “Anywhere else?” I plead. He shrugs his shoulders.

The truth is that, at least for a visitor with limited French, Dakar’s music scene isn’t so easy to get a handle on. AgenDakar is useful (cancellations notwithstanding), but there’s no substitute for knowing someone from the city.

The hotel receptionist suggests I speak to her friend Big, who plays in local band Sous L’Arbe Acoustik (souslarbreacoustik.com).

“Dakar is great for music,” Big assures me over a jus de bissap (iced hibiscus tea) at the French Institute. The bar-restaurant is decorated with colourful broken tiles and pretty Senegalese fabrics and plants, and makes for a tranquil retreat from the chaos of the city. It also hosts live bands.

“We have this passion for music,” Big tells me. “Music and rhythm are in us since we are kids. It’s part of the community, and the centre of all celebrations, like weddings, baptisms. Singing and dancing are a part of our daily lives.”

After mentioning in passing that he is the grandson of Senegal’s first president Léopold Sédar Senghor (!), Big recommends I visit La Calebasse on Route de la Corniche, which is the very strip I passed en route from the airport. He also suggests Les Petits Pierres in Oukam (lespetitespierres.wordpress.com) – and Just 4 U.

A newer place he mentions is Bazoff, a trendy lounge bar in the city centre that has a restaurant and stage in the back. There I find the handsome Birahim Wone performing. He’s one of the most talented guitarists I’ve ever heard. The only downside is that he’s playing mostly western covers, not Senegalese music.

I’m trying to decide whether this matters, when a Spanish woman introduces herself; somehow she’s recognised me from the Grand National Theatre the night before. The Songhai musicians are staying in her hotel, Casa Mara, and the eponymous Mara says she’ll introduce me to them.

Shortly afterwards, Toumani Diabeté walks in. I’ve loved the legendary kora player ever since seeing him perform at the Barbican with Damon Albarn half a lifetime ago. But now, sitting a stone’s throw away from him, I find myself oddly tongue tied.

As for Mara, she’s unequivocal about where to go for live music in Dakar – she insists I visit the very place I’ve been avoiding for days. And so on my last night in Dakar, I tell the taxi driver to take me to Just 4 U. At least there’s no trouble pronouncing it.

The outdoor venue has a ramshackle charm, with tarpaulin hanging above and a stage held up by metal pylons. And the dinner of yassa (chicken in a rich sauce of onions and spices) is a superb prelude to the music.

I’ve always said I hated reggae, but the opening act’s impassioned take on the genre has me questioning my convictions. The mostly Senegalese crowd confounds another assumption. Just 4 U is clearly not just a tourist joint.

Then for the main act I strike musical gold. Stepping behind a six-piece band, Senegalese legend Cheikh Lo starts snatching at the drums in a style that’s at once instinctual, masterful and effortless. When he sings, alternating between playful lilt to gravelly croon, the whole room is spellbound.

Halfway through the show, the polymath steps off stage to embrace a man in a white suit and hat watching at the front. With a jolt I realise that this is Cheikh Lo’s old friend and collaborator, Youssou Ndour. Dakar has taught me a valuable lesson. Sometimes the path is well trodden for good reason.

Listen to the full playlist here.