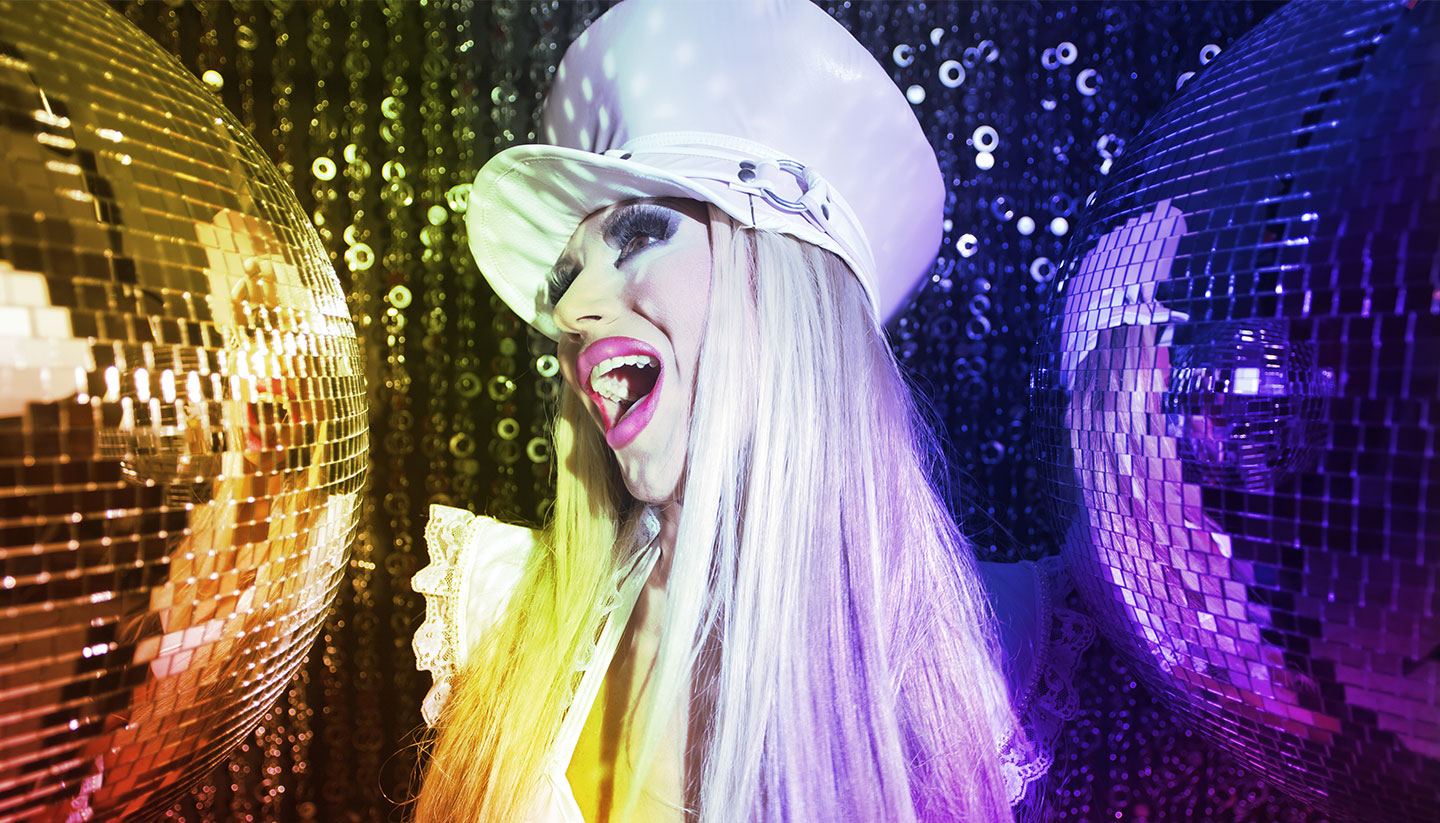 New York City is your haven for immersing yourself in the freedom and expression of the LGBT+ community, writes Aubri McCarter

There’s more to the gay scene than Pride and rainbow flags. Gay nightlife is an art form, a refuge for those who crave freedom of self-expression and reinvention. It is here you will find peace and acceptance among people who have struggled to find the same. As said by long-time events promoter Ladyfag, “People can say all sorts of things about nightlife and how empty it is, and how it’s all about sex, drugs, and rock and roll, but there really is a community there.” Even if you are not LGBT+, as long as you have an appreciation for unconventionally creative art forms and respect the safe spaces of the queer community, you will be welcomed with open arms.

Located on Christopher Street, the heart of the gay rights movement in New York, The Stonewall Inn attracts both locals and tourists from all over the world. This bar/club is exciting and fun but with a historic past that reminds you how hard the community has fought to get this far. Designated as a National Historic Landmark due to the 1969 riots that led to the pride movement, it still remains as one of the most famous and classic of all LGBT+ venues in NYC. With two floors bringing you drink specials, drag shows, the occasional comedy show, weekly lesbian nights and dance parties, there’s always something going on that will catch your attention. You can even purchase Stonewall Inn merchandise on their website or donate to The Stonewall Inn Gives Back Initiative, which is a non-profit dedicated to supporting organizations that advocate for LGBT+ communities who “suffer the indignities and fear arising from social intolerance”. 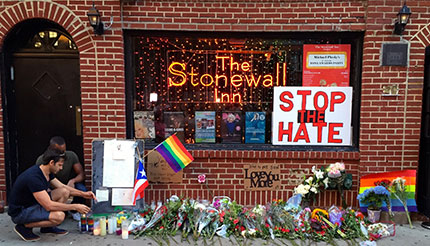 Created by Ladyfag, a nightlife icon in New York City, Battle Hymn is a monthly party and a celebration of queer culture. The atmosphere brings you a nightclub with pulsing electricity, the glitz of drag culture and intricately planned looks. Ladyfag’s events are always guaranteed to be frequented by drag queens (RuPaul’s Drag Race season 10 winner Aquaria is a regular) and other iconic nightlife figures including Amanda Lepore whose fearless expression of her transgender identity has been predominant in New York City since she was an original Club Kid.

Tuesdays from May until October, “Queen of the Night” Susanne Bartsch hosts the popular On Top summer party at Le Bain, The Standard Hotel’s rooftop lounge. This is one of the season’s hottest events and a venue for queer artists and performers to keep you entertained until the sun rises. With performers including Amanda Lepore and frequent appearances by popular faces within the drag community, top fashion designers and occasional Grammy-winning artists, this is the place to show off your most creative looks. Susanne is an underground legend who has become notorious for creating spaces for the beautiful, bizarre, and outlandish since the ‘80s. She was also one of the people who brought attention to the AIDS crisis by throwing the Love Ball, which raised millions for the cause. 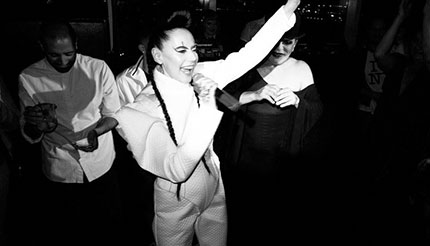 Susanne Bartsch’s monthly Brooklyn party is now a classic that has grown and flourished greatly over the years. Packed with many of the loyal guests from On Top and a plethora of hosts and DJs including Amanda Lepore, Gage of the Boone and Amber Valentine, Kunst is the perfect event to dance the night away. This electropop neon illusion contains an atmosphere vibrating with passion, magic and thrill. 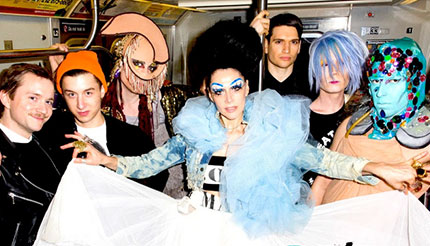 Susanne Bartsch’s newest party, Follies, is different from the others and takes a more cabaret approach to the nightlife scene, paying tribute to the 1920s. Expect a night at the opera mixes circus-like burlesque in an eccentric array of performances. The show features a rotating cast of characters from Joey Arias to, of course, Amanda Lepore, creating unconventional couture and an unforgettable nightclub entertainment experience. This summer residency is hosted on Fridays at The McKittrick Hotel, which is a distinguished venue for elaborate costume parties and special events. 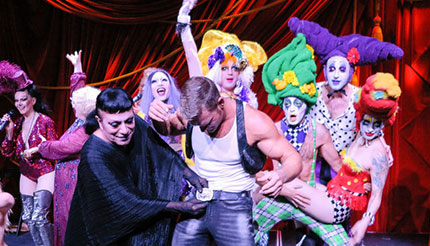 Performance at the © Follies

Four blocks away from the lively St Marks Place, where you’ll find several open front markets most frequented by resident wanderers, The Boiler Room guarantees you a fun night. This friendly dive bar serves $4 drinks after 10pm and provides a pool table, several cosy couches, and a jukebox connected to Spotify so you can dance all night to songs of your own choosing. And before you stumble into a cab at the end of the night, don’t forget to grab a slice or two of 99-cent pizza, open until 5am, right across the street. What more could you need?

Sat in Williamsburg, the hipster mecca of Brooklyn, the Rosemont has a chill lounge with a dance floor at the back, making it an excellent place to come for a few drinks and some dancing without an overwhelming “club” feeling. It also hosts drag shows and live performances on some nights and past performers including queens from RuPaul’s Drag Race and pop princess Kim Petras. There’s a full bar, seating areas, a dance floor with live DJs, and a patio outside where you can smoke a cigarette and relax before heading back into the thumping music. 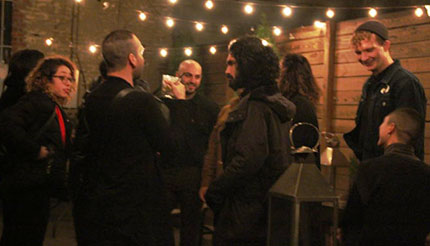 Located on Christopher Street, this fun bar features drag shows and performances. Of course there are DJs who keep you dancing the night away, but there are also numerous other events like Drag Queen Bingo, weekly drag wars, truth or dare and karaoke, all hosted by local queens and queens from RuPaul’s Drag Race. You’re sure to have a night full of entertainment here no matter which day you stop by. Happy hour includes $4 drinks from 2-8pm on weekdays.

This is New York’s friendliest and best-known lesbian bar in the heart of the West Village, less than a 10-minute walk to Christopher Street. The space is a bit small and can grow cramped as the night goes on, so if you’re looking for somewhere with a dance floor then this may not be your best bet. But if you’re in need of a cosy space to socialize with friends and grab a drink or two, then head on over. Happy hour is Monday-Saturday until 7pm with half priced drinks. 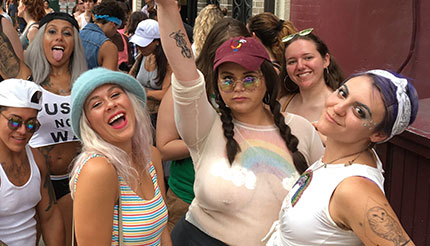 Another popular spot in Williamsburg, Metropolitan is one of Brooklyn’s original gay bars, standing strong since 2002. With a pool table, photo booth, and cosy fireplaces for the cold New York winters, this place has left nothing out of the equation. There’s a huge outdoor patio open all year round (perfect for catching a break from the thumping music inside). Every Sunday from Memorial Day weekend until October, this venue also hosts the popular BBQs with DJs and free food. 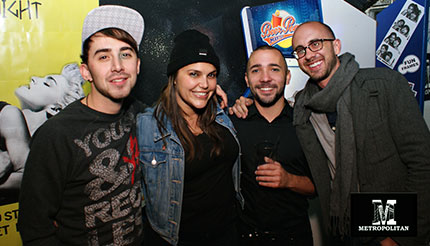