From whale sharks to coral reefs, Japan's Okinawa prefecture is full of surprises. Joe Minihane discovers a new side to the country.

It appears out of the blue, swimming majestically beneath me as I duck my head into the South China Sea. A whale shark, the largest fish in the world. Escorted by a trail of smaller fish, it glides through the water, opening its colossal mouth to feasts on the offerings of awestruck scuba divers.

Snorkelling in tropical waters is not something you’d usually associate with Japan, but then Okinawa doesn’t feel very Japanese. Floating some 1,000km (621 miles) south of Tokyo, this archipelago of paradise islands wears its Pan Asian influences proudly.

Formerly the Ryukyu Kingdom, this prefecture was independent until it became part of Japan in 1879. Its people traded far and wide across the continent, and its food, architecture and culture are all imbued with aspects of China, Korea and South East Asia. Consequently, it’s unlike anywhere else in Japan, which had been cut off from the outside world until the 19th century.

Paradoxically, it’s Okinawa that finds itself cut off nowadays; the archipelago has been largely forgotten by international tourists, omitted from most travellers’ itineraries. But, as I swim with this seagoing giant, I realise this lost paradise offers a travel experience you won’t match on the mainland. Okinawa has wonders the likes of Tokyo, Kyoto and Hokkaido can’t match.

A taste of Okinawa

Dried off after my aquatic adventure, my guide Yoyoi and I head to Naha, Okinawa’s capital and home to some of the best restaurants for nuchi gusui, meaning literally ‘medicine food’.

Okinawans are proud of their cuisine, especially as it’s believed to contribute to the long life expectancy of its residents – women here live to an average of 87.02 years, topped only by Nagano in central Japan.

Feeling ravenous, Yoyoi and I slide open the door to Fumiya (3-17-9 Maesima). We kick off our shoes and pad across tatami mats to a low slung table. Yoyoi natters with the proprietor, an elderly lady – or Obaa as they’re respectfully known in these parts – who scurries off to the kitchen and returns holding two trays laden with local delicacies.

There’s chanpuru – a mixture of pork, eggs and tofu – and goya, a bitter melon, which is a mainstay of Okinawan cuisine. There are bowls of peanut tofu and seaweed; of miso bulked with dried tuna and purple sweet potatoes; and pork steeped in soy.

As we eat, Yoyoi explains why Okinawa cuisine is so distinct. ‘Local ingredients are very important to us, as are the flavours of other countries we used to trade with,’ she says. ‘After the war, there was a scarcity of food, so we relied on the fresh vegetables we could grow and the pork that could be farmed. People had no choice but to eat the best food they could find locally, hence it’s so healthy.’

That evening Yoyoi and I head to Kalahaai (8-11 Mihama), a bar-cum-concert venue on the beach in Mihama. We squeeze in more local delights – including slow–cooked pig’s ears, sea grapes and pickled shallots – grazing as we watch a local band called Tink Tink perform traditional Okinawan songs.

It doesn’t feel especially Japanese. The sound of the stringed sanshin is certainly reminiscent of the Japanese shamisen, but the riot of colour on the women’s kimonos, the informal dancing and the lively, upbeat songs are influences from China and South East Asia.

As the women dance, the audience whoops and hollers. We show our appreciation, too, before heading out into the steamy night to stroll through one of Okinawa’s most incongruous sights; the American village.

With its Ferris wheel and boardwalk, the area feels more Santa Monica than southern Japan. Uncle Sam’s influence is a legacy of WWII, when the Americans occupied Okinawa – they only handed it back in 1972, but US military bases remain on the island.

I watch, bewilderedly, as a fire-eater entertains crowds of GIs, who munch on burgers and tap their feet to country music. It’s a sight I can’t really get my head round as I head back to my hotel. This couldn’t be less like the Japan of popular imagination if it tried. 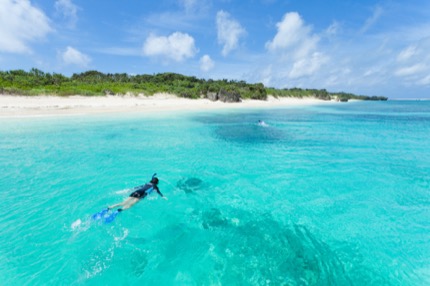 Snorkellers paddle towards one of Okinawa's ubiquitous beachesIppei Naoi / Thinkstock

The following morning I plan a trip to the majestic coral reefs at nearby Zamami. But my visit is scuppered by an incoming typhoon, which has whipped up the waves and suspended ferry services.

So I head north, away from the storm, to Zampa beach on Okinawa’s main island. The archipelago has plenty of sandy shores to choose from, but this is one of the best. I watch as fish dart back and forth in the turquoise waters, as kids splash among the light rollers lapping onto the beach.

Further north, Emerald Beach and Moon Beach are calling out, but my time on Okinawa is almost up. So I head to Yu–yu–ra–san, a little wooden restaurant nestled in the island’s interior, which uses local pork on its American themed menu.

Munching on a huge Aguu pork burger, I marvel at Okinawa’s ability to surprise. The local motto, nankuru nuisaa (‘don’t worry, be happy’), couldn’t be further from the live fast ethos of mainland Japan. But that’s part of this forgotten archipelago’s charm. Okinawa’s appeal lies in its differences, and its status as a cultural and culinary magpie.

Getting there
There are no direct flights to Okinawa from the UK. The best way to get there is via Hong Kong or Tokyo and catch a connecting flight, which takes two and half hours from both destinations. All Nipon Airways (www.ana.co.uk) and Japan Airlines (www.jal.co.jp) both fly to Okinawa.

When to go
Okinawa is hot all year round, with temperatures regularly breaking 30ºC during summer. This is the best time to come if you want to spend time on the beach, although be aware that August’s typhoon season can cause major travel disruption.

What to do
• Go snorkelling or scuba diving with Top Marine (www.topmarine.jpn.com). Found at a number of coastal locations, this excellent company offers trips to see whale sharks or access to hidden, underwater caves.

• Okinawa’s beaches are legendary. Take a boat to the Kerama Islands from Naha City for a slice of tropical paradise. If time is tight, stay on the main island and head north to Emerald Beach.

• Okinawa is blessed with excellent cultural attractions. Shurijo Castle, a UNESCO gives a great insight into the history of the Ryukyu Kingdom, while the superb Peace Memorial Park, overlooking the Pacific, offers a stark reminder of the brutal battle which raged here towards the end of World War II.