Over and Alps: Can artificial snow save skiing in Europe? 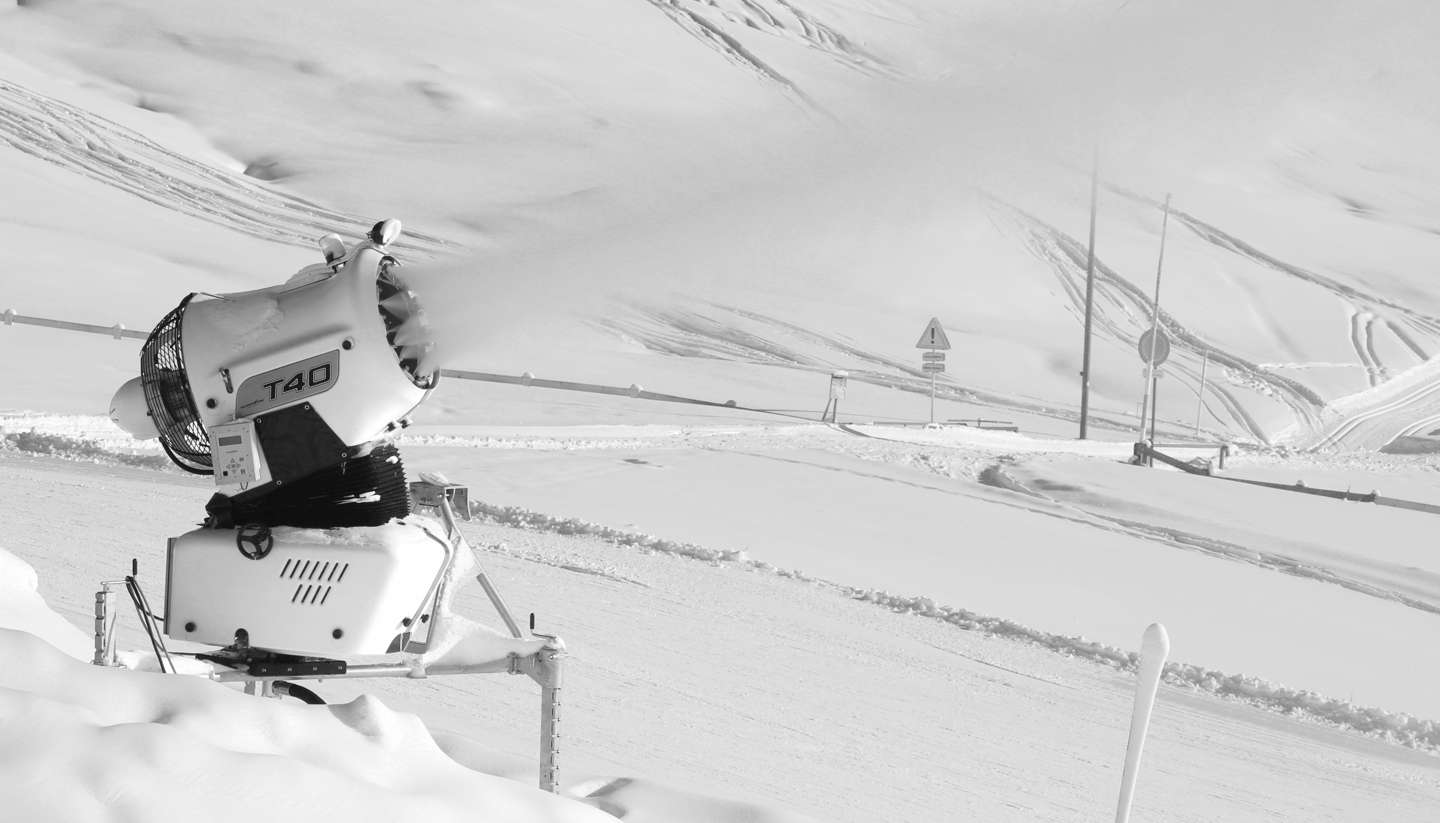 Rising temperatures and inconsistent snowfall turned some skiing vacations into hiking holidays this season, so is artificial snow the answer?

Clive and his wife are stood in the warm of the Edelweiss and Gurgl ski room in Obergurgl-Hochgurgl, Austria, as hotel guests rustle on their ski suits and snap shut their boot buckles.

It’s a few days before Christmas and the couple are here on their annual skiing holiday – except they’re meant to be elsewhere.

They had originally booked a hotel in Lech, two hours away by car, but a few days before they arrived they had to change their plans.

“We were meant to be skiing in Lech,” Clive says leaning on his skis, “but they didn’t have any snow, so we’ve come higher up. Fortunately, [the hotel] had one room left, so we’re up in the attic.”

That was back in December when only 13 of Lech’s 47 lifts were in operation – a story repeated across many of Europe’s lower level ski resorts, particularly in the French Alps.

Is a lack of snow part of a growing trend?

In a report published last year, the European Environment Agency (EEA) found that snow cover on the Continent had declined by 13% between 1967-2012 in the months of March and April, when the ski season typically ends.

It also discovered that the rate at which snow cover diminished had sped up since 1980 and the snow depth in the Alps had decreased at lower elevations, mainly due to temperatures creeping above freezing point.

“The snow line has risen by about 80m per decade in the summer,” says Helga Kromp-Kolb, a scientist at the BOKU University of Natural Resources and Life Sciences and one of the lead writers of the report.

“Changes in winter are less clear,” she adds. “Austria has not experienced the dramatic decadal variability that France or Eastern Europe have.”

However, Kromp-Kolb also points out that one of the biggest glaciers in the Tyrol region of Austria, the Hintereisferner, is shrinking fast.

“The Hintereisferner has lost about 23m of ice over the last 50 years,” she says. “By the end of the century, an optimistic estimate is that 20% of the glacier area and volume will be left in the Austrian Alps.”

For skiers, rising snow lines and shrinking glaciers should be a worry. Even though higher precipitation is predicted in the coming winters, the warmer temperatures forecasted could still mean less snow.

“Some of the low lying ski resorts have already stopped investing in skiing infrastructure and have found other means of attracting tourists or making a living,” Kromp-Kolb said.

“Many skiing resorts up to about 1,500m will run into problems in a decade or so, especially if their base stations are very low,” she added.

For decades, ski resorts have turned to artificial snow to counter this problem. If the snow doesn’t fall naturally, resorts use snow cannons and snow lances to produce their own.

This may seem drastic, but more resorts are now doing this says Hansueli Rhyner of the Swiss Federal Institute for Snow and Avalanche Research (SLF).

This is not necessarily a bad thing for skiers. According to Rhyner, snow cannons produce better, more consistent powder than can be expected naturally, but there are limitations.

The main problem is that snow canons don’t work in temperatures above freezing point. “If we could produce snow at 0˚C, we would save a lot of ski resorts,” he argues, “but this is not realistic at the moment.”

There’s another concern too: the changing seasons.

“Periods with low temperatures start later and end earlier,” says Helga Kromp-Kolb. “We are therefore witnessing a tendency towards using increasingly powerful snow machines in order to be able to produce a large amount of snow during the first cold period that occurs in winter.

“This then needs to be maintained throughout the season, but it means using extraordinary amounts of water in a short time. This can cause conflicts with the water needs of communities or other resorts.”

Ski resorts, however, are looking to improve. Lift companies in Obergurgl-Hochgurgl in Austria are already producing around 1 million cubic metres (35.3 million cubic feet) of artificial snow each season.

It’s not a cheap business. It costs around €3 (£2.20) to produce a single cubic metre (35 cubic feet) of the white stuff and the resort’s lift companies are spending around €3 million (£2.2 million) annually to keep their slopes in top shape.

Today, they have 150 snowmaking lances, plus 145 low pressure snow canons. This has allowed the resort to extend its season from November to April.

“We have recognised that people are hot for skiing in November,” says Dr Werner Hanselitsch from Obergurgl-Hochgurgl ski area. “Some years ago they opened the ski area at Christmas time, now it’s mid-November.

“It would be possible for us to keep the area open until mid- or the end of May. But in our experience, as soon as it is spring on lower levels, people are not really interested in skiing anymore. So the reason for the length of the season is not snow, but the people willing to ski or not.”

When I visited in December, there were plenty of people wanting to ski, many of whom had come specifically for the good snow. Now Obergurgl-Hochgurgl is trying to improve their snow making further, whilst retaining a level of sustainability.

The resort has tested an artificial cloud in Obergurgl this season which project leaders say can produce near natural snow crystals.

The project’s scientific leader, Michael Bacher, is proud of the progress the cloud has made.

“From an economic and ecological point of view, the new technology is very interesting as it uses considerably less energy and water,” he said, hitting on two of the biggest challenges for artificial snow.

These are areas that Helga Kromp-Kolb believes need more thought.

“Serious considerations on the conditions under which artificial snow production is ethical, need to be made,” she says. “At present snow machines run on fossil fuel, and thus enhance the CO2output.

“On the other hand, a well-visited resort might turn out to have a small CO2-output per person. This might mean that the number of resorts should be limited, permits being reserved for those with best natural conditions.”

And ultimately, those with the best natural conditions are where skiers will end up, because the long-term limitations of artificial snow means it can only ever be a stop-gap for ski resorts.