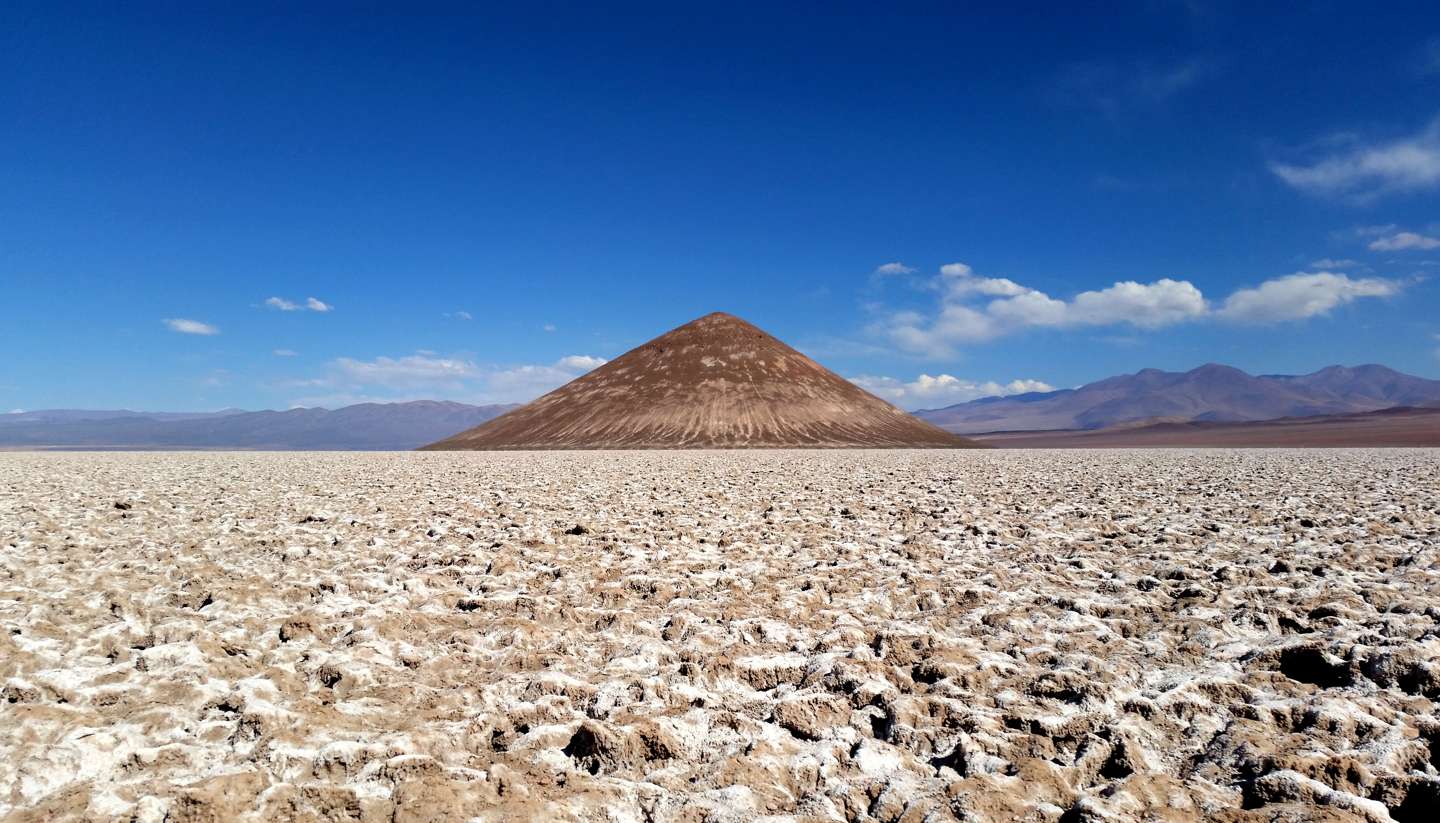 Driving through north Argentina’s little-known Salta province, I quickly lose track of time and space as I watch the landscape change from cactus-riddled wilderness to vast yellow fields flanked by volcanoes; from fiery red canyons to crystal white salt flats.

It’s an Argentina far removed from the beaten tourist trails; the country’s buzzing, European-like capital, Buenos Aires, is a world away – 1,500km (930 miles) away, in fact. Bar a few remote villages and free-roaming llamas, there’s little sign of life in these parts.

For most of the year, that is. Time your visit with Salta’s annual pilgrimage of the Lord and the Virgin of the Miracle (September), and you’ll see thousands of people trek through these harsh landscapes, carrying statues of the Virgin Mary and Jesus Christ all the way to the region’s capital city of Salta.

Today, though, we rarely pass another vehicle – it feels like exploring uncharted territory. Off the highway, asphalt becomes rutted dirt. As the ride gets bumpier, the dirt track becomes harder to navigate in the narrow mountain passes.

But we’re in safe hands – our local driver Hector and guide Homero know these mountains like the back of their hands. Homero has been taking visitors on adventure tours and treks all over the region for nearly a decade.

Both evidently love their region and can’t help taking snaps of the scenery like the rest of us. Their enthusiasm is infectuous.

The coca leaf has been chewed and brewed for tea for centuries among indigenous peoples in the Andean region. When chewed, it acts as a mild stimulant and suppresses hunger, thirst and fatigue. It also helps overcome altitude sickness, Homero explains.

While the coca leaf in its natural form is a harmless stimulant comparable to coffee, the ready extractability of cocaine from the leaf is the major argument to justify its illegal status in the UN’s 1961 Single Convention on Narcotic Drugs.

In the case of Argentina, the cultivation, sale and possession of unprocessed coca leaves is only legal in some northern provinces, where it’s deeply rooted in the indigenous Andean culture. In Salta for example, you can easily (and legally) buy a bag of coca leaves from small town markets and street vendors, but don’t even think of bringing any back – it’s illegal in the rest of the country, let alone back home.

I’m lucky. I don’t really suffer from altitude sickness, despite being an asthmatic. But I am curious enough to give the coca leaves a try. After chewing some 20 leaves for about 15 minutes, the experiment is over: the bitter aftertaste doesn’t do it for me.

Altitude sickness is not to be taken lightly, though. The next morning, we pass a tourist bus parked by the side of the road. One of the passengers, a man in his fifties, is feeling very poorly and urgently needs oxygen.

Thankfully, we have an emergency oxygen cylinder in the back of the van and Homero is trained in situations like these. It takes a while but the man slowly starts to breathe better, so we decide to be on our way.

As we drive off (sans emergency oxygen, fingers crossed we won’t need it), Homero tells me how one of his friends, another local guide, was once driving a busload of tourists in this same area when one of the passengers tapped him on the shoulder and said he “wasn’t feeling too good”.

Next thing he knew, the man had passed out and died before anyone could help. Altitude sickness is no joke, especially as deaths from it are preventable. Read up about it before you travel.

On a rosier note, we’re about to reach Ojos de Mar: three stunning turquoise blue holes plotted in the middle of a salt flat, Salar de Tolar, 4km (2.5 miles) from the village of Tolar Grande. We’re still about 3,800m (12,500ft) above sea level, which is hard to believe as we’re surrounded by flat white expanses of land as far as the eye can see.

As well as being a sight to behold, scientists discovered that the blue holes are also home to stromatolites – the first, and most basic, living organisms on earth. Rewind to 1980, and another scientific discovery was rocking the field of paleontology: the first fossils of a sauropod dinosaur with bony armour plates on its back. The dinosaur was named Saltasaurus in honour of the region.

Back to present day, and our final stop is Salar de Arizaro, an even larger salt flat that borders Chile. It’s taken us hours to get here and everyone is exhausted but all I can do is stare at the once again mesmerising scenery: the perfectly shaped Cono de Arita, a conical hill standing proudly in the middle of the bleach-white salt flat; the deep-purple, snow-capped Andes mountains looming in the distance; the blinding sunshine; the bright blue sky.

Over the past two days, we’ve covered some 900km (560 miles) by road, passing some truly amazing sights. The remoteness, and the spectacular contrasts in colours and scenery are undeniable highlights.

Buenos Aires may be the world’s biggest shrink capital (the city has more psychoanalysts per capita than anywhere else in the world) but in Salta, there’s no need for a therapist: unspoilt nature this diverse lifts the soul and heals all ails.

And yes, the world’s largest, and most famous, salt flat may be just over the border in Bolivia, and the world’s driest desert may be in neighbouring Chile, but you know what? What northwest Argentina offers above all else is crowd-free, spectacular scenery. That silence, that undisturbed peace, is priceless.

Argentina is now high on travellers’ must-see list. “Our roots are in the northwest of Argentina,” is one of the first things a local said to me when I arrived in BA. I say: go now and head north, before the word gets out about this hidden slice of paradise.

Getting there
Salta’s Martín Miguel de Güemes International Airport is located 15 minutes away from downtown Salta. You can fly there from Buenos Aires with Aerolineas Argentinas in a little less than 2 hours.

Getting around
If you plan to drive, don’t even think of exploring Salta’s challenging back roads without hiring a 4-wheel drive. One of the best options is to explore the region with a local guide and driver. I travelled with Silvia Magno who I would happily recommend.

When to go
Salta’s weather is mild year-round, but it’s best to visit between April and November to avoid the rainy season.