The 20 best bars and restaurants in Sao Paulo 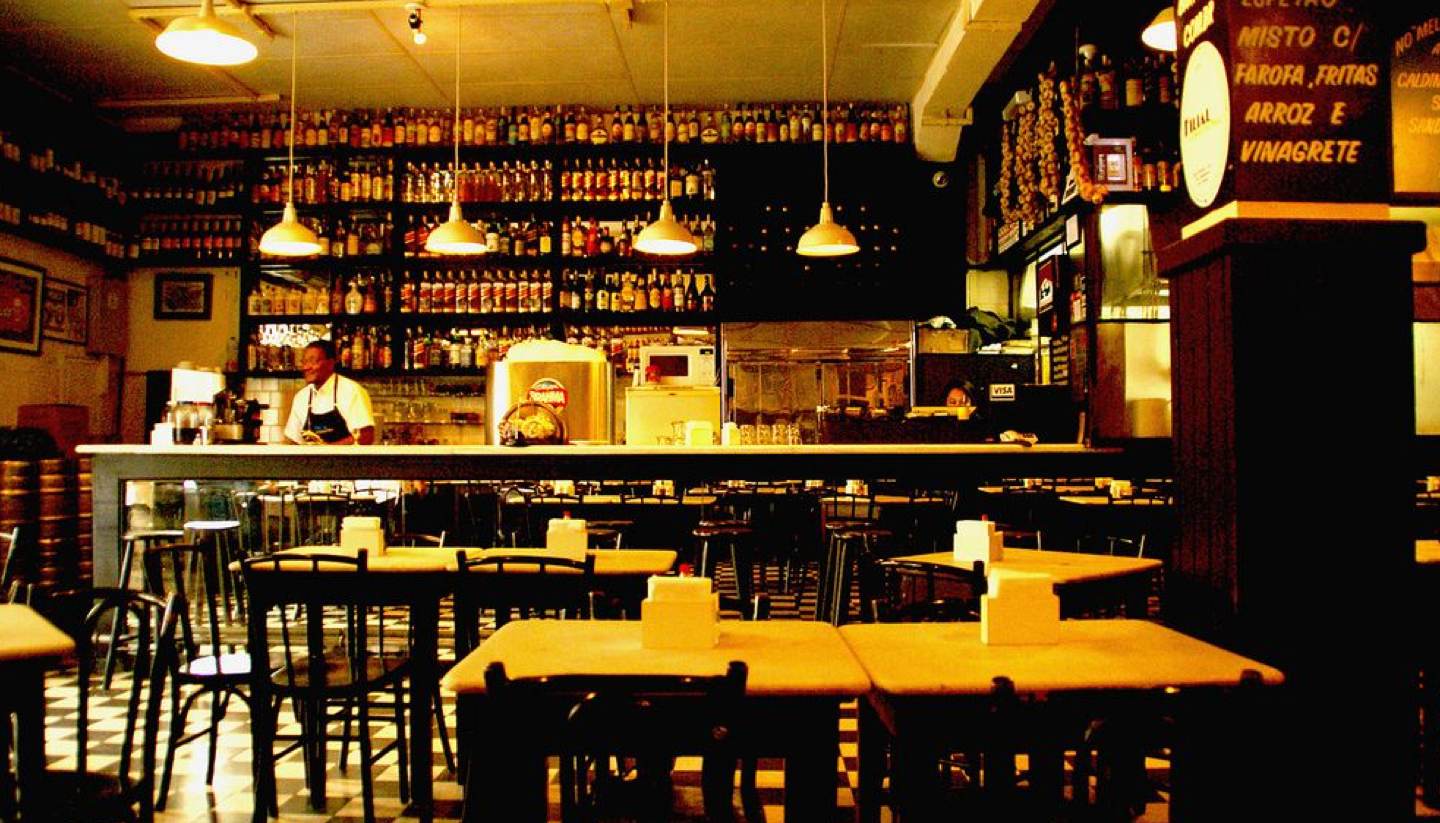 As the World Cup kicks off we send our roaming gourmand, Daniel Fahey, to find the best bars and restaurants in São Paulo.

São Paulo is everything you want her to be. Fun, flamboyant and flirtatious, she is the alluring dancefloor temptress; the celestial siren of all things gourmet. She’s art, she’s music, she’s poetry.

Take her hand and you’ll have a whirlwind romance, but curl your fingers into hers and you could spend a lifetime discovering her many secrets, as some 20 million Paulistanos try to do every day.

Few see it all, though. Those 25,000 restaurants and bars are just too much for a feeble mortal to stomach, or so grumbled our roaming gourmand, Daniel Fahey, when we sent him to the city.

The 10 best restaurants in Sao Paulo:

Forget stodgy pasties and gloopy coffee, this is one garage meal you’ll turn the car around for. With turquoise tables and colourful chairs, this wonderful eatery in a converted garage gets creative with its fresh salads and mouth-watering mini-bites, plus the puddings are worth the pit stop alone.

Even in a city this big, word of mouth can still go a very long way, and that’s the reason the patio at Feijoada da Lana is always ringing with the clicking of cutlery and chatter of guests. Locals and well-informed travellers come for the simmering feijoada (pork and black bean stew), which is heartily spooned out with rice, kale, sliced orange and a smile.

Home of Helena Rizzo, the World’s Best Female Chef 2014, Maní has the look and feel of a country retreat. There are beamed ceilings, un-framed mirrors and a rustic courtyard, which are paired off with modern, Scandinavian touches. The food has the same balance: informal meals fizzed up with contemporary class. The Capellini with mushrooms, Sicilian lemon shavings and truffle oil hypnotises.

For head chef, Alex Atala, D.O.M. is less an award-garnered restaurant, more a way of life. In a mission to rejuvenate the culinary experience in Brazil, Atala decided to make Amazonian ingredients like açaí (berry), pupunha (peach palm fruit) and cupuaçu (a pulpy fruit) the stars of his dazzlingly progressive dishes.

The first thing you’ll notice in Mimo is the décor; it’s splashed in all white (the walls, the floor, the chairs, the tables), much like the room Mike TV met his demise in at Willy Wonka’s factory. And like that fanatical chocolatier, the food is ahead of its time. Lose yourself with the octopus with dried figs or the Angolan chicken breast with risotto gorgonzola and pear endive salad.

The name gives the game away, but thanks to chef Emmanuel Bassoleil, Skye Bar is known more for its food than its sensational vistas and stylish cocktails. Fine dining here tackles Brazilian, French and Italian staples with flamboyance and panache, and it’s the raspberry vacherin with cassis liqueur that manages to outdo the skyline.

With more Italian immigrants in Sao Paulo than anywhere else on the planet, it’s no wonder the city offers long lunches dominated by Mediterranean culinary craftsmanship. Attimo run with the marble theme in the conservatory, but the food is more modern: if the pork shoulder with purple sweet potato and crunchy vegetables doesn’t satisfy, then the Romeo and Juliet pavé certainly will.

You can’t come all the way to Sao Paulo and not fold in some of its fabulous, stone-banked pizza. The slices from Bráz Pizzaria are so good Julius Caesar might be fooled into thinking they were baked in the ovens of Rome. Although it’s always busy here, they turn tables around fast, so you won’t be wanting long.

From the outside Bueno looks like a private abode. And when you go downstairs into the sunset shine of the dining room, the theme continues as the owner and chef, Fernando Kuroda, makes customers feel right at home. Spooning up Asian delicacies, patrons can get the best the restaurant has to offer by ordering the teishoku – a Japanese set menu with fish or meat, vegetables, rice and a bowl of miso soup.

Meat tends to feature heavily on Brazilian menus, but Apfel changes all that. This charming little restaurant, hidden in an ivy-covered townhouse, offers exceptional vegetarian food including rustic salads and vegan options. To get a real flavour of what it offers, grab a plate and head to the buffet.

The 10 best bars in Sao Paulo:

Formerly a meat packing warehouse, the décor has barely changed since the previous beef business moved out. But don’t let the meat hooks put you off; this an uber cool bar with great drinks, a retro vibe and, ironically, a vegetarian friendly menu.

Touted as one of the best botecos in São Paulo, Veloso is famed for its delicious caipirinhas and loquacious punters. It does some fantastic bar snacks, too – don’t leave without quaffing coxinhas (battered and fried shredded chicken with melted cheese). Arrive early to score a table.

A São Paulo institution, every inch of the walls here are adorned with football memorabilia, so it’s the perfect bar to imbibe the spirit of the World Cup. You won’t go thirsty either – there’s plenty of chopp (draft beer) on tap and the food is good, too.

This bohemian bar in the hipster hood of Baixo Augusta is an antiques store by day. But by night revellers gather amongst the retro furniture to quaff craft beer and dance to DJs, who spin funk, soul and blues from Wednesday through Saturday.

Meaning ‘chicken’ in Portuguese, this classic boteco lives up to its name with a range of delicious poultry dishes. The drinks menu is far more impressive, though, boasting more than 500 Brazilian and international beers.

One of the city’s first speakeasy bars, SubAstor attracts a hip crowd who come for the imaginative drinks menu and highfalutin pub fare. To get there, find the Astor restaurant and look for the velvet curtains leading downstairs into the unsigned SubAstor.

Hardly what you’d call a traditional Brazilian bar, this British themed boozer feels more Soho than São Paulo. However, England supporters looking for a taste of home will be delighted to find a selection of real ales and tasty pub grub. There’s also live music, pool tables and large screens playing the footy.

Reputed to serve the best beer in São Paulo, Bar do Juarez’ success has spawned several branches across the city, but this remains the original and best. As well as great beer, the bar is lauded for its hearty local fare and dapper waiters.

This bar helped turn the workaday downtown of São Paulo into a hip hangout. Patrons come to sip cocktails in plush leather seats before heading to the basement dance floor. Alberta #3 is named after a Bob Dylan track because the venue’s fun-loving owner, Ivan Finotti, bears a passing resemblance to the great singer-songwriter.

One of the most distinctive bars in São Paulo, Drosophyla’s eccentric interior is adorned with random keepsakes, collected by the bar’s globetrotting owner. The cocktail menu is just as quirky (do try the basil caipirinha) and, if you’re drinking alone, you can always chat up the resident cat.

The best bars and restaurants in Salvador

The best bars and restaurants in Rio de Janeiro