The buzzing culture of Osaka and beyond 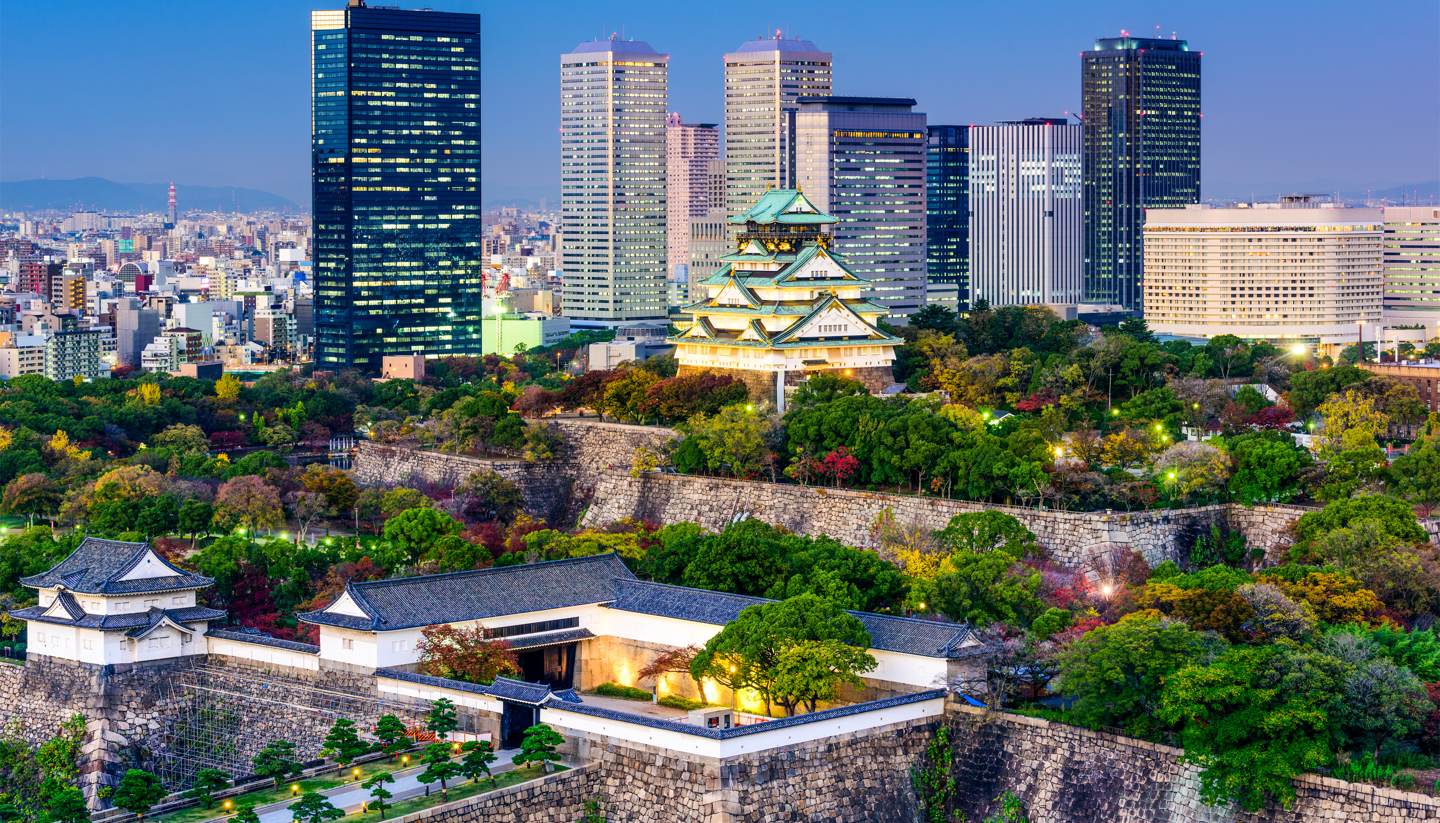 Old-world charm meets bold, modern culture in Osaka, this bustling and friendly city will surprise you at every turn

Located 43km (27 miles) south of Kyoto is Osaka. This port city, with its cityscape fanning out from its namesake bay, also has an ancient castle within its heart. Osaka is renowned for glorious street food, modern architecture, top-notch shopping and friendly locals.

Osaka is also an efficient transport hub, with major airlines flying direct to Osaka Kansai International Airport and bullet trains whisking visitors to the city centre and beyond, including Tokyo, Nagoya, Hiroshima and Fukuoka.

The towering Osaka castle with wide moats is arguably the most famous landmark in Osaka. But in the city where old meets new, it’s worth taking time to explore the cutting-edge masterpieces of the critically acclaimed architect, Tadao Ando. 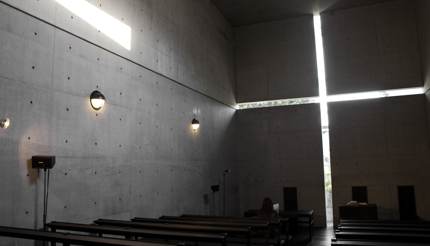 Visit the Church of Light in Ibaraki

Born and raised in Osaka, Ando has designed striking buildings all over the world. However, Osaka and its surrounding regions are home to some of Ando’s best work.

Must-see Ando architecture in Osaka include:

A firm favourite of students worldwide, Cup Noodles require little introduction. The inventor Ando Momofuku founded the company which was to become Nissin in Osaka in 1948 and today, the weirdly wonderful Cup Noodles Museum is a must-see. Visit to learn about its fascinating history and see a model shed where Chicken Ramen, the world’s first instant noodles, was invented. 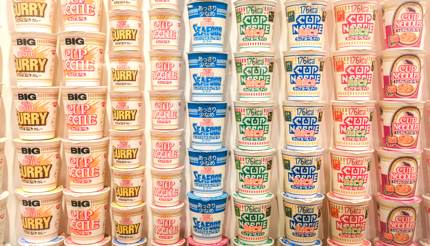 There are various Cup Noodles flavours to try

Affectionately called Japan’s Kitchen, Osaka is a foodie’s paradise. Eating well is a way of life here, so much so that they have a saying called ‘kuidaore’, which means ‘Eat until you drop’.

Must-try dishes include okonomiyaki (a Japanese savoury pancake) and the famous takoyaki (octopus balls). Also, given the city’s proximity to sea, the sushi and sashimi here are always fresh and delicious. 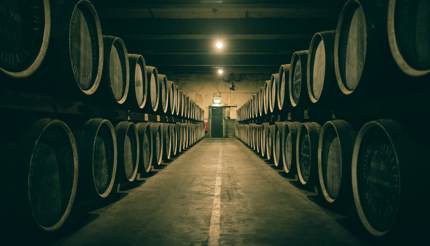 While beer and sake are typically Japan’s favourite beverages, Osaka locals also love to knock back a good whiskey. You don’t have to go far out of the city to visit Japan’s oldest malt whiskey distillery, Suntory Yamasaki Distillery. Take a tour, enjoy the museum and sample the award-winning liquor.

Just south of Osaka, Sakai is a bustling seaport playing a vital trade role in connecting Japan to the world. However, it is Sakai’s high-quality knives that make the city a household name.

Carved from steel, Sakai knives are sleek, sharp and designed to be well balanced in a chef’s hand. Visit Mizuno Tanrenjo, the famous family-run business that has been producing knives since 1872. Find out how they are made and purchase one for yourself. 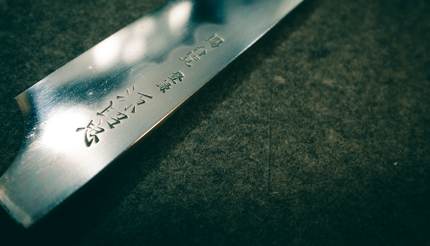 Then walk a few blocks south to Sakai Risho No Mori and immerse yourself in a matcha tea ceremony. Simple yet elegant, this traditional Japanese culture also gave rise to the Japanese term wabi-sabi, a philosophy that celebrates the beauty of imperfection. 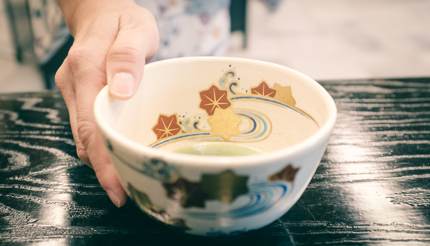 Sakai also boasts the Tomb of Emperor Nintoku. Shaped like a keyhole, this massive monument is one of the largest tombs in the world at 486m in length. Follow the hour-long path circling the tomb and learn about the fascinating emperor of the 5th century. 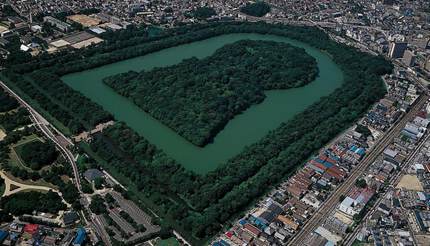 This small city just north of Osaka is known for its natural beauty – and the best place to savour the splendours is the Meiji-no-mori Mino Quasi-National Park. The park is a delight in every season, with clusters of cherry blossoms blanketing walkways in spring, glorious displays of colour in autumn and magical, snow-covered trees in winter.

Within the park, the Mino Falls is the main attraction. Not far from the waterfall lies the Ryuanji Temple. Said to be established in the year 650 by the legendary En no Gyoja, the founder of Shugendo (a mixture of Taosim, Shinto, Buddhism and Japanese Shamanism), this temple draws pilgrimages from near and afar. 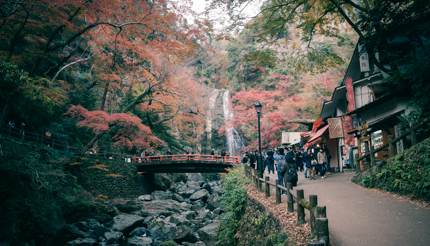 Mino Falls, on the outskirts of Osaka

For a more authentic experience, the Sakainoma Guesthouse (Sakai-ku Kumanochonishi 1-1-23) is stylish and comfortable while maintaining traditional design. The rooms are priced at 7,000 to 10,000 Yen (US$65 to US$93) per person.

Travellers with bigger budgets can enjoy the luxury of the InterContinental Osaka (Ofukacho 3-60). This five-star hotel offers five dining options, as well as magnificent views of the city skyline, all a five-minute walk from JR Osaka train station.

Getting to Osaka and its surrounding areas

A bullet train from Tokyo Station to Shin-Osaka station takes only 2.5 hours.

Alternatively, Osaka is just a 50-minute journey by car from Kansai International Airport.

Once you’re in Osaka, you can take a train to the Yamasaki Distillery (25 minutes). For the Cup Noodle Museum and Mino, take a 5-minute ride on JR line to Osaka (Umeda) Station, then change to Hankyu railway (30 minutes).

From Osaka to Sakai, take a subway to Namba Station (15 minutes) and then switch to Nankai Railway for a 10-minute ride. You can also take the Nankai line from Kansai International Airport to Sakai. The journey is about 30 minutes. 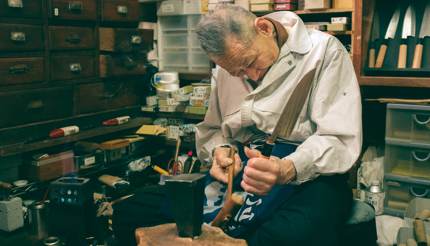 Find out how Sakai knives are made