Walking with dragons in Indonesia 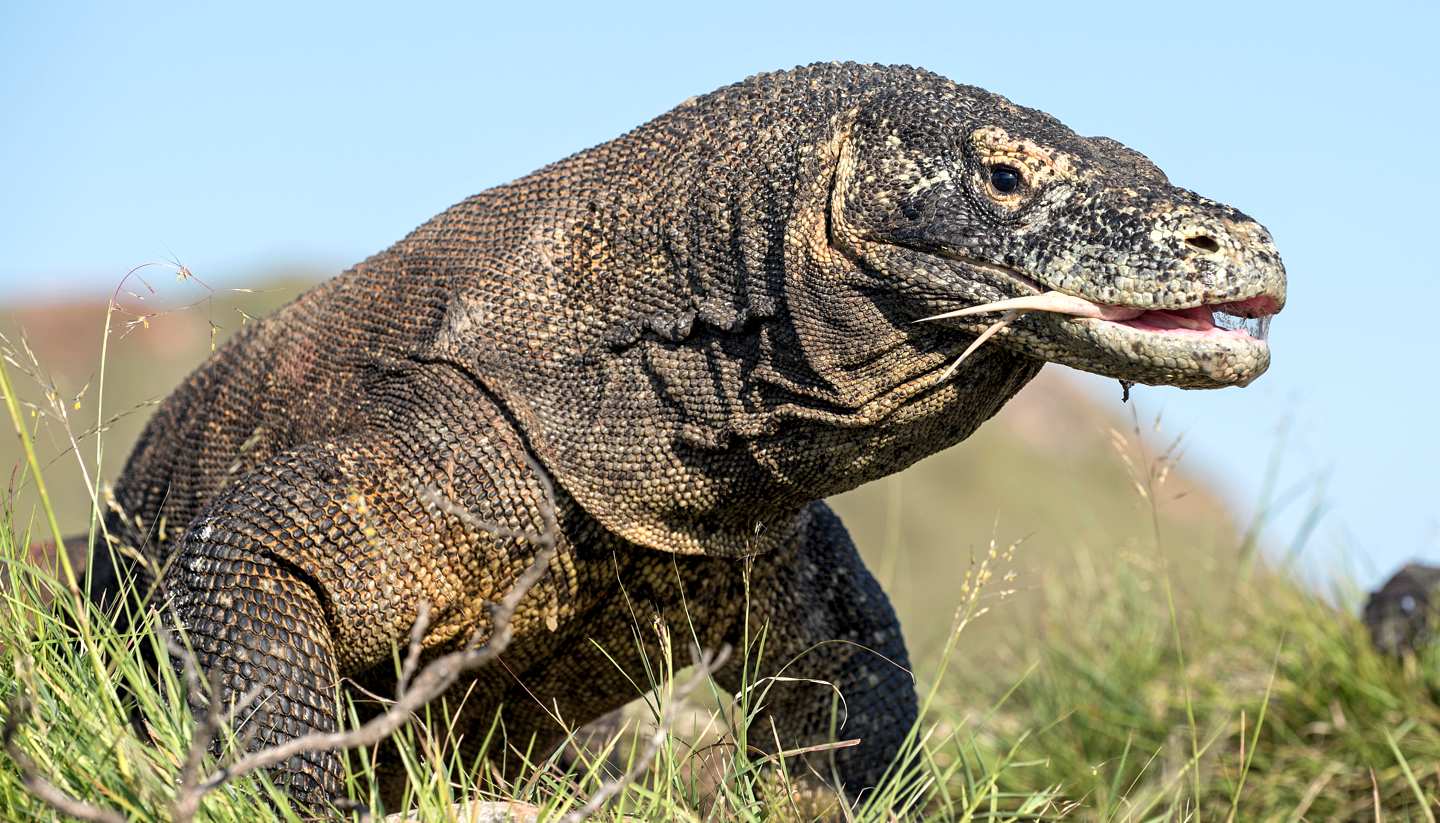 While Komodo Island is internationally famous for its dragons, few tourists ever visit neighbouring Rinca Island. Mark Eveleigh reports from what could be the most spectacularly dramatic predator territory on the planet.

Angry clouds loom over a rugged island as our boat cuts across a churning current. In the distance I can see mysterious hills that seem more reminiscent of African savannah than of tropical Indonesia. Anticipation builds with every metre of headway we make towards the legendary land of the dragons and I climb up to the bridge to scan the shoreline optimistically with binoculars.

We set sail from Bali a week ago on a voyage past Nusa Penida and Lombok, then along the north coast of wild Sumbawa (three times the size of Bali and yet virtually unknown to tourists). Our skipper has already explained that about sunset he plans to heave to and find a sheltered anchorage so that we are ready to make landfall in the Komodo Islands early next morning.

On a map of Indonesia, our route would barely be noticeable and I think once again how incredible it is that so few tourists explore the world’s biggest and most diverse island nation. The boat we’re sailing on is appropriately called Dunia Baru – ‘New World’ – and she too has become an icon of Indonesian seafaring tradition. Built in Borneo and Bali by Sulawesi shipwrights, this 51m (167ft) long American-owned superyacht has been described in the sailing press as “the finest and most luxurious ship ever built in Indonesia”.

We’ve been steering a course not for Komodo itself but for little Rinca Island and by early morning one of the boat’s inflatable ribs is already skipping us jauntily through the mangroves for a rendezvous with the famous dragons.

A study by San Diego Zoo estimated that, while 390-sq-km (150-sq-mile) Komodo Island boasts an estimated 2,800 dragons, little Rinca Island has a booming population of 2,500 crammed into about half that area. And the dragons of Rinca are spectacularly aggressive.

“Five people were badly attacked in Rinca village last year,” says our guide Ramli, as he leads us from the jetty to the park headquarters, “and there’s a ranger in hospital at the moment with bites that are so bad that they think they might have to amputate his leg.”

We leave the ranger station and begin to walk in single file behind Ramli who is now armed with one of the long forked staffs that are the ranger’s only defense against dragon charges. For obvious reasons I’m no longer taking notes but Ramli’s descriptions of dragon attack strategies remain indelibly etched in my memory.

What makes Komodo dragons such fearsome super-predators is that they have absolutely no fear for humans nor any respect for large prey in general. They may have evolved to such gigantic size (the largest was 3.13m and weighed 166kg) to hunt pygmy elephants that once lived in these islands and will not hesitate to sink their serrated teeth into the wild horses and buffalo that roam these hills.

And sinking their teeth is very often all that is needed: the evil saliva that drips from a dragon’s jaws carries more than 50 types of bacteria and a toxic anticoagulant. Get bitten by a dragon (even a relatively small bite) and, unless you get medical treatment fast, you will die.

We walk onwards through the forest, following a muddy trail that is clearly marked with the footprints of deer, wild pigs, buffalo and, of course, dragons. We trek for several hours across the grassy highlands and under spiky palms that are (dragons permitting) used in this part of Indonesia to make firewater hooch called sophie. At one point we have to beat a hasty retreat when a lone bull buffalo lurches into our trail, snorting and tossing a belligerent set of horns.

Later we come across a huge skull that is all that remains of a reptilian feast. We shudder with the realisation that dragon jaws are capable of crunching the hooves and thigh bones of a buffalo. The dragons remain elusive but throughout the trek the tension never lets up.

I’d spent a lot of time in predator territory in other regions. I’d tracked jaguars on foot in Costa Rica and stalked black panthers on assignment in Kenya. I’d walked with lions in Zimbabwe and trapped crocodiles with a research project in Botswana. But nothing prepared me for the suspense of a trek through the domain of the Rinca dragons. Typically, it wasn’t until we were almost back at the ranger station that we came across several sunbathing dragons.

“The dragon you see lying by the trail is not normally dangerous,” Ramli tells us as we focus cameras on armoured skin, muscular tails, razor claws and evil, dripping muzzles.

“They attack from behind with terrible speed and you never see the one that gets you. On average I get chased several times a week, but I think my god will always protect me.”

I wonder under my breath whether Ramli’s god might protect me too.

It’s a humbling experience to realise that all around you in the bush are giant reptiles that could potentially make a meal of you in a few short minutes… and that your only deterrent is a forked stick.

There are a few places in the world that serve to remind mankind that he does not necessarily hold an inviolable place at the top of the food chain. Indonesia’s Rinca Island is probably the most powerful among all these places.

Getting there
Return flights from the UK cost from £679 pp (www.roundtheworldflights.com). Flight time from the UK to Indonesia is typically about 14 hours. Flight from Bali to LabuhanBajo (Flores) takes one hour and costs about £60 pp. Indonesia Trip Advisors (www.indonesiatripadvisors.com) can arrange flights and accommodation.

Getting around
The Dunia Baru (www.duniabaru.com) has become one of Indonesia’s premier luxury cruise vessels. She boasts six extremely spacious en-suite double berths, and there is a wonderfully sumptuous full-beam master suite on the aft upper-deck, with a large bathroom, and a day-bed sundeck. She also carries diving equipment and lots of watersports activities, including jet-skis, kayaks, Sunfish sailing dingy, stand-up paddleboards and three inflatable ribs. Dunia Baru is based in Komodo from April to September (and in Raja Ampat from October to February).

When to go
The heaviest rainfalls are between December and February. Rainfalls tend to be short and sharp but divers should bear in mind that the reefs and lagoons will be murky until about April when the dry season comes into full swing. As with most ‘safari’ destinations, dry season is best to visit, when the wildlife (buffalo, Sunda deer, wild pig and horses) congregate around the shrinking waterholes.

Liked this? You may also enjoy these articles: