What to do when your cruise holidays go wrong? 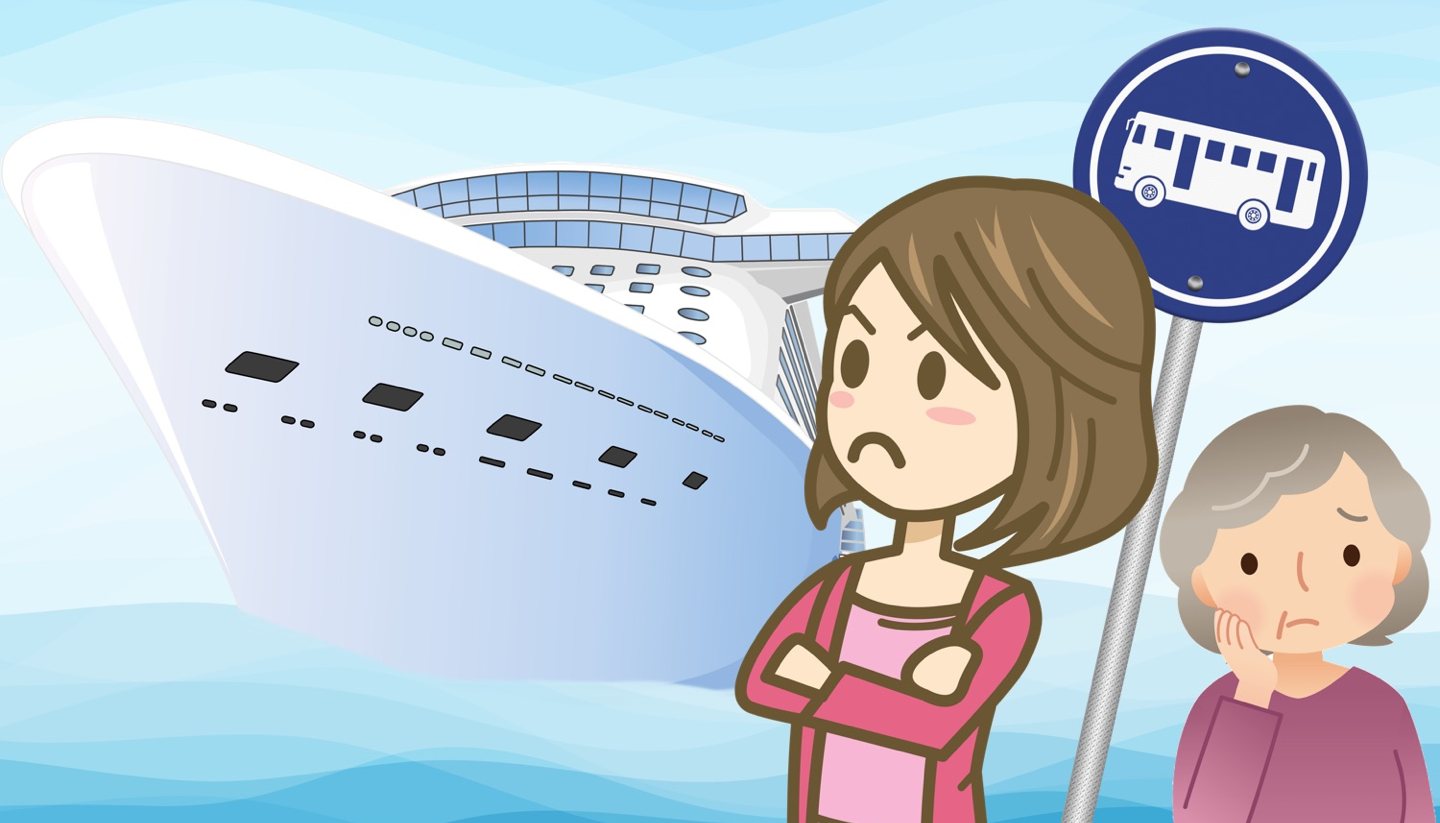 One of our writers, Vivien Yap, finds out that she can’t do much after a holiday is ruined, as she shares her experiences

I watched the TUI bus left, thinking it would come back for us. I was being overly optimistic.

TUI is a big and popular tour provider in Europe, but my first excursion on my first cruise with them went terribly wrong.

It was a warm Tuesday afternoon in Menorca where TUI’s cruise Merella Celebration had docked for a day. As it happened, that day was also my mom’s 80th birthday, which was the reason I took her on a cruise in the first place.

At Menorca, we paid £36 each for a trip to Ciutadella, a quaint old town on the other side of the island and the journey from the cruise terminal to Ciutadella was about an hour. There were 36 of us, plus two additional TUI employees including the excursion manager (for now we’ll just refer to her as JT). At the drop-off point, the guide told us to meet at the same place at twenty to one (12.40 pm), giving the group a bit more than an hour to explore.

At exactly 12.40 pm, my mom and I showed up at the bus bay, only to see the bus leave without us.

Shocked and full of disbelief, I had to think what to do next. It was then I realized TUI would probably argue that we never showed up, so I reached into my backpack, pulled out my phone took a picture of the empty bus bay – the time stamp showed 11.41 am (UK time), which was 12.41 pm in Menorca. 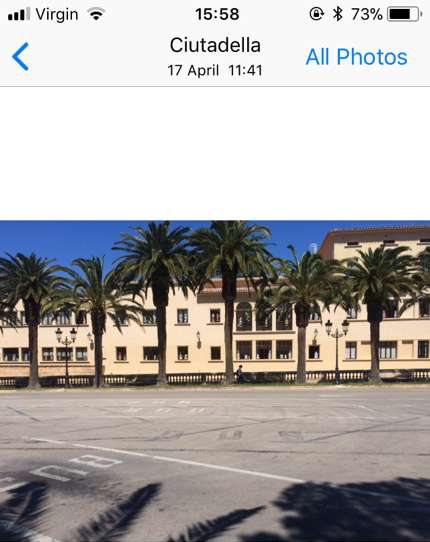 The worst part of the experience was actually seeing my mom so convinced that they would come back for us and I had to tell her that they wouldn’t. It wasn’t easy, to say the least.

Near the bus bay, there were a few taxis waiting nearby so I asked how much it would cost to get back to the cruise terminal. One kindly driver told me it would be around €55 and with only official taxis available on the island, you can’t use any taxi booking app. Without so much cash on hand, I began looking for an ATM first before getting in a cab.

When I returned to the ship, the excursion office was shut, so I lodged a complaint at the reception which promised to tell the excursion office. At 5 pm that day, the excursion office finally opened and I went to make a complaint myself. JT, the excursion manager who was on the same trip as us, is a monumentally disengaged lady with rather large nostrils – I could almost feel the air going in and out whenever she turned her face to one side as she spoke. Perhaps she finds facing customers a highly unpleasant task? Anyway, she insisted that we weren’t on time (but we were!) and the guide counted the number of passengers before setting off, but she couldn’t explain why the bus left without us or how they could miss a small 80-year-old Chinese lady (incidentally, we were the two non-white passengers). She looked at my picture of the empty bus bay and dismissed it outright. She then took a copy of my taxi receipt and told she would give me an answer in 24 hours. 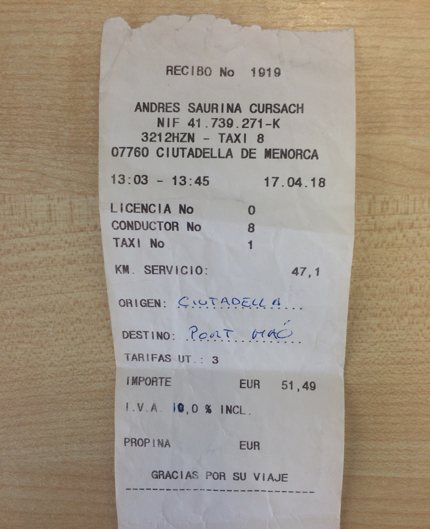 The taxi receipt with JT's fingerprints on it, despite TUI said I never lodged a complaint

I never heard from her again. In fact, I ran into her a few days later on the hallway on the ship, but alas she pretended not to see me, so lucky me, I got to check out her side profile and nostrils again.

I’d think you’d forgive me for cancelling my other two excursion bookings with TUI.

So what can you do when you cruise holiday goes wrong? If TUI is your provider, you can see from the example above that they bounced me from one person to another, without addressing the issue. In my case, I can’t do much except to write an article about it.

Is my experience an isolated incident? I doubt it. Do a search on TUI’s Facebook page and you will find plenty of unhappy customers making a complaint publicly. So thinking of booking a holiday with TUI? I won’t but I’d never stop you. And if you’ve already booked a cruise with them, read on for more about the cruse.

Let’s set the expectation first. On the website, TUI says “Merella Celebration is one of the smaller ships in their fleet, which makes it really friendly.” That’s right – it’s so friendly that when sitting in the suite cabin, I could hear my neighbour’s conversation and when they flushed the toilet. The suite cabin has two windows, both are old and rusty, framing a view that is partially blocked by lifeboats. 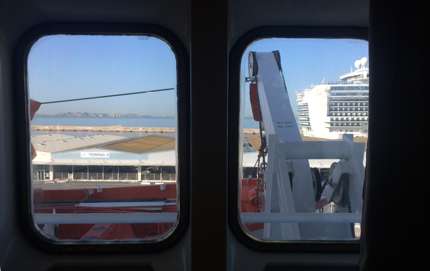 Views from the suite cabin: you see lifeboats outside the windows and a larger (nicer) cruise ship nearby

The suite cabin comes with a ‘premier’ service. I can say that the only special service we received on the trip was being left at the bus stop.

The food was basic and rather hearty, the typical hard pasta and chewy meat that you’d expect to get from a greasy spoon. I watched a TUI employee take a heaped pile of fries but threw the burnt ones back to the food tray, I stayed away from fries after that.

With an extra of £195 per person for the drinks package, it can be expensive if you aren’t a heavy drinker, so bring your own alcohol with you. You may want to bring your own coffee and make it in your room too, as the coffee served in the restaurants is lukewarm at best.

Also, join the excursion at your own risk. We were left behind, who knows what else might happen to you.

While other cruise lines proudly show off the facilities, TUI has kept a low profile on these. My guess is because the pools are ridiculously small. 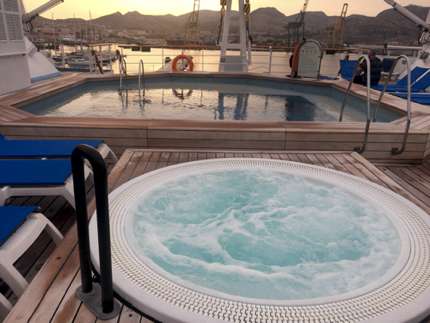 The cruise market is competitive and iglucruise.com is a good place to do your research and see what’s on offers. Another useful site is cruisecritic.co.uk – this site does have commercial articles preferring one or two cruise lines but you can also see some negative comments about certain cruises, including the aforementioned cruise ship. I should have checked out the negative comments before booking the trip and now the joke is on me. C’est la vie.