When travel goes wrong: I was rescued by the Bolivian Air Force 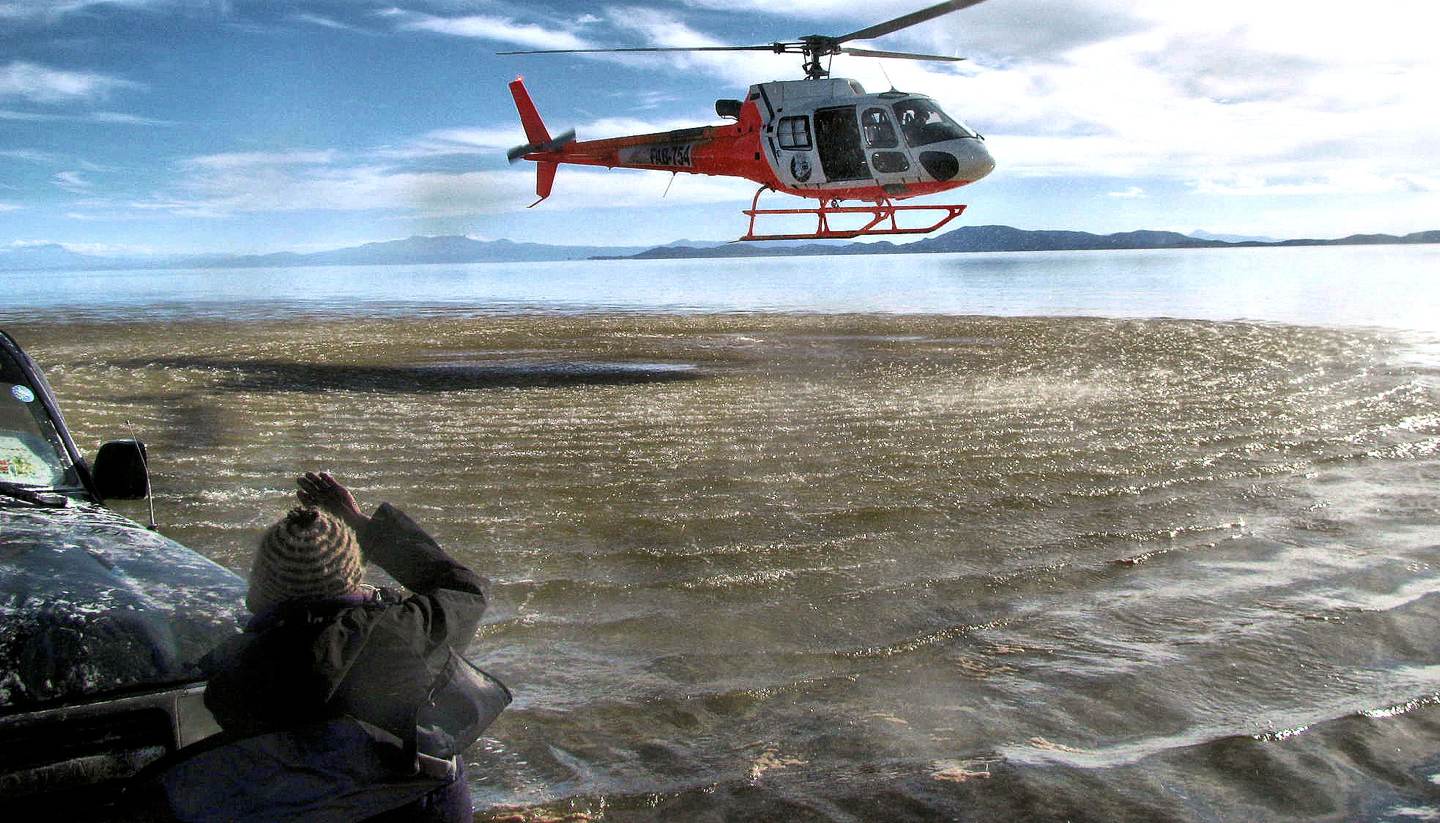 When travel goes wrong: the incredible story of Jennie Wagstaff, whose jeep got stuck in the middle of Salar de Uyuni, Bolivia.

I arrived in Tupiza, Bolivia during the last week of December 2011, with plans to spend New Year’s Eve under the stars at Salar de Uyuni, the largest salt flat in the world.

I’d met Michael, a French guy keen on doing the same, and our hotel travel desk paired us up with a Dutch couple, Michelle and Paul, giving us enough to fill a jeep.

The weather was sunny and dry when we left the following morning. We bumped along Wild West country, past clay-coloured cliffs and chartreuse cacti, following in the final footsteps of Butch Cassidy and the Sundance Kid, the notorious bandits buried around these parts.

As our driver and cook only spoke Spanish, I was translating for the group. We tended to travel in convoy with two other 4X4s. We’d lunch in the same spot, the drivers would chat, and we’d all stay in the same bunkhouses.

We eventually spent New Year’s Eve in a remote little hamlet drinking wine and rum and setting off fireworks.

For the final night of the trip, we made our way to a hotel built of salt. Clattering rain began to fall in the afternoon; it was the first heavy downpour of the wet season.

“Suddenly we felt a clunk. The jeep was stuck.”

We were due to leave the salt hotel at 5am to cross Salar De Uyuni. The idea was to take it all in, snap a few photos and drive onto Uyuni, before looping back to Tupiza by road.

The rain was still rattling down when we left the hotel; it had been falling all night. When we reached the salt flat, it was no longer the large expanse of white you see in travel magazines, but the biggest mirror imaginable. The horizon was undetectable; clouds reflected off the surface. It was stunning.

The other jeeps drove along the edge of the salt flats near to the mountains, but our driver took us directly across it. He drove for about an hour, before stopping. He opened his door, began looking around and got back in. We continued on for a couple of hours.

Suddenly we felt a clunk. The jeep was stuck.

We got out and saw the front wheel had broken through the salt crust. Unaware of the magnitude of the situation, we started taking photos. The mirrored flats meant the horizon lost all perspective, so we took shots that made it look as if we were lifting the jeep above our heads.

The driver asked us to push as he started the engine. As he accelerated away, all four wheels broke through the salt. We were shin deep in the water.

“‘We’re stranded’, the driver kept saying. Then his phone died – the battery ran out.”

The skies finally cleared and exposed the extent of the salt flats. We couldn’t see anything bar a tiny bit of land in the distance. Everything else remained a huge blue expanse; it was like we were standing in the sky.

As I went to get my mobile from the car, it dawned on me how anxious I’d become. I had started to shake and struggled to hold my phone. I only had a single bar of reception.

I sent a message to my mum, dad and my boyfriend, Nick. I said I didn’t know whether to worry yet, but our jeep was stuck. I told them the name of the town we’d stayed in the night before, how long we’d driven for, the tour company’s name and where we were heading.

Our driver was on the phone too, but it quickly became apparent that he had no idea where we were. The salt flats are roughly the size of Qatar.

The person on the line must have been asking him what he could see because he said he couldn’t see anything except a bit of mountain with snow on top. He didn’t know the name of the mountain or which direction we were facing. Then his phone died. The battery ran out. He said his friend was coming to look for us. We waited.

After a few hours, I explained that we needed to contact the Bolivian Embassy. I sent a text message to my mum and told her to make the tour company aware. The guide, though, was reluctant to tell the tour company, presumably knowing the trouble he’d be in. His young wife was pregnant, he said, and the jeep was his. He feared he’d lose everything.

He just stared at the horizon, willing to see something. Now and then we’d notice movement in the distance, but it would always turn out to be a bird.

“A text came through from my mum: ‘Sorry darling, there is no plane.’”

To prevent the jeep from sinking, we took the roof rack off and got out our bags from the boot. We made a raft using gasoline containers. I changed into shorts because it was easier to go to the toilet. The Dutch girl rolled up her jeans.

I put on suntan lotion and offered it to Michelle. She said she didn’t need it. She burnt. Her ankles and shins swelled up. She was in agony and started crying. Her boyfriend cried too.

We slept in the jeep that night. My phone kept losing reception but I got a text message from my mum telling me that the embassy was sending a plane at 7am.

On the second day, I woke up at 5am and began tying T-shirts to a pole I had found in the boot of the jeep. I doused them in petrol to use as a signal for when the plane arrived. 7am came and passed, so did 8am. By 10am, the guide looked distraught with fear. It was as if he knew there was no way out.

A text came through from my mum: “Sorry darling,” it read, “there is no plane.” There was disbelief among us. I tried to stay calm.

The embassy, it turned out, didn’t have a plane to send, so they sent army trucks instead. A dozen of them were ploughing across the flats searching for us, but the longer the water sat on the salt, the weaker it became. Soon the trucks would return to base.

We spent the day just staring at the horizon. My mum had got in touch with the authorities in La Paz. She told me they were hiring a Bolivian Air Force helicopter from the north of the country.

Fortunately, the cook had enough food to go around, but we began rationing water. I used the Dutch couple’s laptop to charge my phone and turned it on every couple of hours to check for updates. None came, so we slept inside the jeep again.

Storms started forming at the edge of the salt flats. They must have been gathering around the mountains in the far off distance. The stars and moon looked amazing. Climbing out of the jeep at night was like stepping into space; in hindsight it was beautiful.

“The driver caught sunstroke. His eyes were so red it looked like he’d burnt his retinas.”

On the third morning, the driver fell ill. I’m assuming he caught sunstroke. He shivered in the heat of the day and was freezing at night. His eyes were so red it looked like he’d burnt his retinas.

That night in the jeep, the cook thought she saw a helicopter. She was overjoyed, but it was just a passing star. The driver started crying and begged me to let him start walking. I told him we had to stay together and that we’d talk about it again in the morning, but I would’ve never let him walk.

I confiscated the lighter from him too, because he kept igniting the petrol-covered clothes. He was so filled with desperation that I thought he might set fire to the jeep by mistake. I locked the doors and stayed awake much of the night. I was scared we’d wake up and find him gone.

“Suddenly we heard a helicopter. I was shaking so much I couldn’t ignite the beacon.”

Early into the fourth morning, the driver and I dug around the jeep with pans. We wanted to disturb the black earth beneath the salt so we were more visible for the helicopter. We had the T-shirt beacon ready and the guide stood on the roof of the jeep looking for any movement.

Suddenly we heard a whirling noise. The driver held out the pole for me to light, but I was shaking so much I couldn’t get the lighter to work. Then we saw the helicopter and it saw us. I was elated; I was relieved.

The pilot asked how many people and I held up six fingers. He gestured back with two. Sod it, I thought, and I moved towards to the helicopter, grabbed the rope and heaved myself up.

The Dutch girl’s legs were still so painful she fell sick, so she got in too and we whirred back to base. I felt utterly relieved. Even from the sky I noted how striking the salt flats still looked. I texted my mum: “In the helly!!!!” She still has the message on her phone.

The helicopter only had enough fuel to do one more trip, so they picked up the other two boys, plus the driver, and left the cook there with a friend of the driver’s. They stayed another night.

In the end, the tour company had no insurance and my policy didn’t cover search and rescue. I had to pay my share for sending a helicopter. The trip operator ordered the driver to give me money, but I refused to take it. He was a really nice guy, just ill informed about the risks of tackling Salar de Uyuni in bad weather. I’d love to go back and do that trip in the dry season, but I’d definitely use a different company.

There are dozens of companies offering jeep tours across the Salar de Uyuni, but choosing a reliable operator isn’t easy. While most trips return with nothing more than great photos, tales of breakdowns, unsanitary conditions and dangerous driving are all too common. Here’s how to choose the right operator:

1. Book a private tour
While private operators are a lot more expensive, they are much more reliable. They often carry oxygen bottles in case of altitude sickness. If you can’t book privately, visit a number of tour operators before choosing one.

2. Check the essentials
Check the state of the jeep’s tyres (including the spare) and its seatbelts. Ensure the driver has a good first-aid kit and radio transmitters in case of an emergency.

3. Pack well
Although soft drinks are included, make sure you take extra water to last for the whole trip. Also pack warm clothes as temperatures can drop below freezing and accommodation heating can be patchy at best. If you have one, a compass could come in handy as well.

4. Numbers
There have been a number of horror stories surrounding the overloading of jeeps. Typically vehicles can take four travellers as well as a driver and a cook, so check you all get a seat before booking. Be aware that if you can’t fill a jeep, the tour company is likely to pair you up with other travellers who have booked elsewhere.

5. Stay in contact
Text or email the details of the trip to a friend or relative, stating the name of the tour operator and the route you’re due to undertake.