Which Singapore are you? 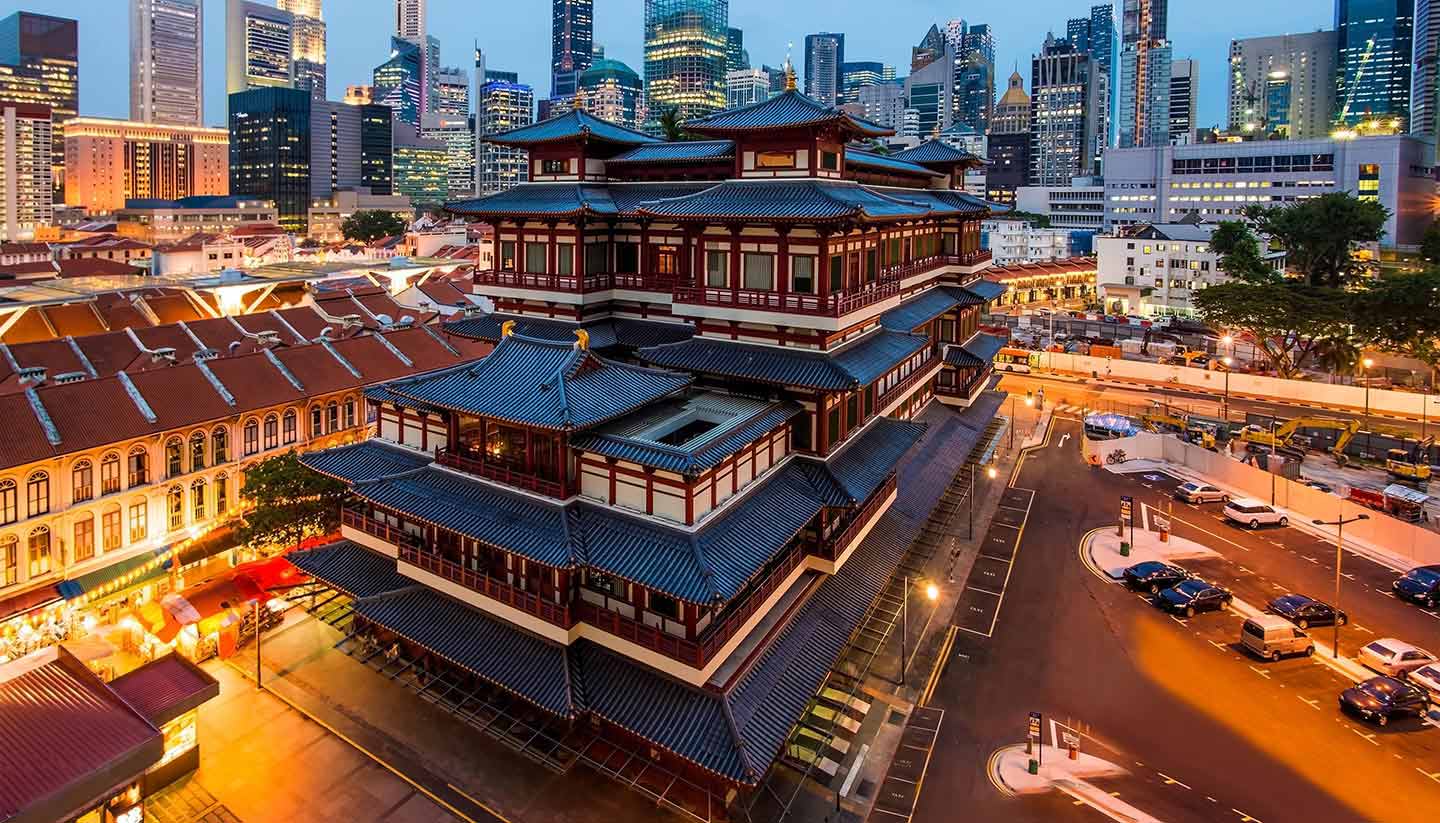 Singapore is a boring business city with less culture than a low fat yogurt. Or is it? Gavin Haines finds out.

What a difference a year makes, aye. It’s barely 12 months since I last visited Singapore, but in that time the crowded skyline of this sizzling city-state has found room for yet more gleaming glass and steel. Sprouting from the reclaimed land like silver beanstalks, these omnipresent skyscrapers serve as a metaphor for the lofty ambitions of this diminutive nation, which, this year, is simultaneously celebrating 50 years of independence and mourning the passing of its founding father, Lee Kuan Yew.

Singapore is not everyone’s cup of chai. Seen by many as a sanitised business destination bereft of character, a report released last week will hardly challenge those perceptions. Published by a global real estate firm (yawn) called Jones Lang LaSalle, it crowned Singapore the best place to do business in Asia (bigger yawn). Men in pinstripe suits got a hard-on. Everyone else switched off.

But beyond the polished facade of its skyscrapers, extravagant hotels and mega malls lies a destination of surprising diversity; a city that harbours the last vestiges of virgin rainforest, some of the best street food in Asia and bazaars that could belong to downtown Mumbai. The question is: which Singapore are you?

If you like a side order of cityscapes with your dinner, you’ve come to the right place. Singapore’s skyline is the star attraction at various rooftop restaurants, most notably Sky on 57 and LeVeL 33, whose somewhat unimaginative names allude to their elevations in the Marina Bay Sands Hotel and Marina Bay Financial Centre respectively.

It’s all fine dining and fancy views at these restaurants, which serve delights such as Hokkaido scallops and wok-fried frogs legs with ginger and scallions. LeVeL 33 even boasts its own microbrewery, producing no fewer than five craft beers.

If all that sounds a bit highfalutin for you, keep it real on the streets of Little India, Chinatown and the Arab Quarter, where hawkers serve exquisite street food for pocket change. Be sure to try the famed fish head curry, a Singaporean speciality, which is the signature dish at the appropriately named Chye Lye Curry Fish Head Restaurant (1 JlnLegundi).

"You could be in downtown Mumbai"

For a wider selection of Chinese street food try Red Hill Food Centre, Maxwell Road Hawker Centre or Chinatown Complex Food Centre, which serve delights ranging from frog porridge to carrot cake, which is not a cake and contains no carrots. Authentic Arabian cuisine can be found in the vicinity of Arab Street where Middle Eastern eateries serve up everything from Syrian to Lebanese fare.

Little India of course is the place to go for a taste of the sub-continent. You could be in downtown Mumbai here: Bollywood music and pungent spices fill the air. Standout restaurants include Mustard (32 Racecourse Road), Sakunthala Food Palace (66 Racecourse Road) and Khansama Tandoori (166 Serangoon Road).

Traditionally eaten on tables by the side of the road, Singaporean street food – influenced largely by India, China, Malaysia and Arabia – is a reflection of the cultural diversity of this city-state.

Okay, so you might not be able to afford a room at the Marina Bay Sands or Raffles, but although these two luxury hotels share five-star status they are at completely different ends of the accommodation spectrum.

The high-rise Marina Bay Sands Hotel is all very modern and phallic; a sleek, glass structure with mega malls and a gigantic infinity pool. Raffles meanwhile is an elegant colonial hotel that’s hosted the likes of Hemingway and Hitchcock, and whose bartenders invented the Singapore Sling before Marina Bay Sands was a twinkle in the eye of developers.

If you like bedding down in heritage hotels, but don’t have the budget for Raffles (rooms start at around £320 per night), check out the Goodwood Park Hotel, Hotel 1929 or the Duxton Hotel, which are some of the last bastions of colonial accommodation in Singapore.

If you prefer to fall asleep in the clouds, but don’t fancy paying Marina Bay Sands prices (rooms start at around £216 per night), Swissotel The Stamford is an altogether more affordable option and lays claim to being the tallest hotel in Singapore. The Pan Pacific, Fairmount and Mandarin Orchard also offer lofty rooms in contemporary, high-rises.

An urban explorer or nature lover?

Supertree Grove is one of Singapore’s newest attractions. Built on land reclaimed from the sea, this manmade forest comprises 18 steel “supertrees”, which light up at night using solar power captured throughout the day.

This pleasantly pointless project is one of a number of artificial attractions in Singapore, the other major manmade fascination being Sentosa Island, where visitors can traipse around Universal Studios, tee off for 18 sweaty holes or sizzle on manmade beaches.

If all that sounds a bit naff, there are some genuinely wild places left in Singapore for visitors to explore. Bukit Timah Nature Reserve and nearby Bukit Batok Nature Park are amongst them and their verdant canopies are home to monkeys, tropical birds, lizards and other species.

Dating back to 1859, the tree-lined walkways and manicured parks of Singapore Botanical Gardens are also excellent places to escape the concrete jungle. Currently in the running for UNESCO World Heritage Status, the gardens are home to outdoor sculptures, an art gallery and a selection of restaurants.

A mall crawler or bazaar browser?

Everywhere is a mall in Singapore – subway stations, underpasses, hotel foyers – and it can seem impossible to escape the rampant consumerism. If you can’t fight it join the masses down Orchard Road, Singapore’s flagship shopping street, which is lined with mega malls such as ION Orchard, Ngee Ann City, Paragon Shopping Centre and many more.

For higher calibre brands hit The Shoppes at Marina Bay Sands, which is packed with high-end boutiques. This retail centre even incorporates a fake river, which shoppers can take a boat trip down. It’s the last word in naffness.

"It’s the last word in naffness"

Little India has several malls to speak of, but it is better known for the bustling market of Bugis Street, whose hawkers sell everything from Indian food to clothes and tacky souvenirs. Chinatown Street Market offers much the same albeit with a Chinese flavour.

For something a little alternative seek out the Public Garden Market, which pops up irregularly in cultural institutions such as the Asian Civilisation Museum. This is the best place to find out what local designers are up to, and to buy art, fashion and vintage items.

The National Heritage Board (NHB) is trying to promote Singaporean culture through a series of exhibitions at its stunning premises. It is also running a social media campaign to highlight ‘intangible aspects of Singapore’s cultural identity’, which include promoting and preserving dying traditions.

Speaking of which, if you fancy a haircut, hop in the barber’s chair outside 23 Amoy Street, which belongs to one of Singapore’s last remaining roadside hairdressers, Mr Lee. Nudging 80-year-old Lee offers cheap haircuts, wet shaves and ear cleaning.

For traditional tailoring (particularly if you’re in the market for a hat) head to Tanjong Katong Complex home to Singapore’s last full-time songkok maker. As well as producing the traditional Islamic hats and keeping a dying art alive, Abdul Wahab Abdullah offers custom tailoring for ladies and gents.

Our guide to Singapore has all the information you will need.