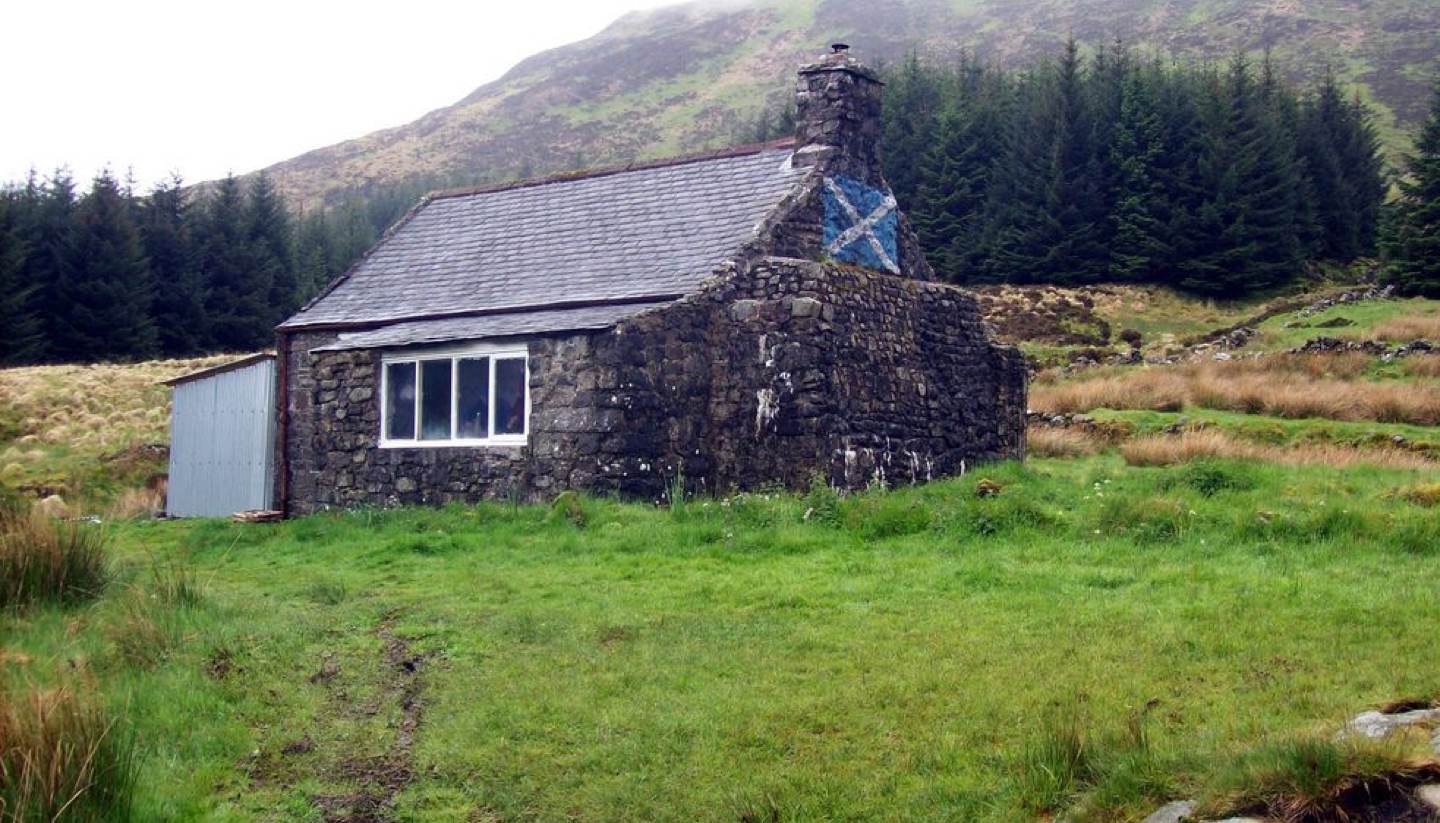 Daniel Fahey tackles the barrelled bounties of Galloway Forest Park with little more than a bottle of whisky.

As afternoon brews into an early Earl Grey evening, the skies fall amber and a damp moorland aroma fills the lowland air. For the last mile or so we have simply shared the songs of the birds. The three of us know we have to reach White Laggan before the sun grows bored or we face a cold, huddled night outdoors with whisky alone for warmth.

Up ahead, my companion Jon is the first to catch a view of Loch Dee. That means our accommodation for the night, a remote hillside bothy, shouldn’t be far beyond its southern shore. Free to use, bothies are shelters located in isolated parts of the country with around 100 across Scotland, Wales and England.

Peter, who is travelling with us, is still quite a way behind. His knotted knee makes hills all the more harder and he winces as he walks. He strained it earlier on the spitting shores of Clatteringshaws Loch when we had rather a lot of trouble making our way from Bruce’s Stone to Ailsa Cottage.

The route had seemed simple on the map. It still does; find the man-made path leading to a rock where Robert the Bruce was said to have rested wearily after battle, curl around Clatteringshaws’ jaw and head for the lonely, wave-white cottage across Moss Raploch.

Reaching the stone had been easy, so we loosely followed the matted grass beyond it. The former footprints of walkers came and went; some steps were retraced, others reclaimed by nature. All had disappeared by Corsland Burn, where water overflowed carelessly towards the forest.

In the cindered sky above, the great Galloway gusts suspended Solway Firth seagulls like string-less kites. Our progress was swifter than theirs, despite us trudging and tripping deeper into knitted lumps of peat bog. The fen was uneasy underfoot and the odd step, a creamy patch underneath the right boot perhaps, would force us to bowl onwards, unable to stop unless we fell.

Jon had been the first to go. His badly-packed backpack pushed his forehead into the mud. I went over next, losing my leg up to the thigh, having to retrieve it like a cattle farmer during calving season. We attempted to reroute through the forest, but bowed beneath ancient, moss-covered branches that clung like fingers into stagnant pools. Trying for Ailsa Cottage again, Peter’s knee packed up.

We’d come up to Scotland for a weekend of wild living, with loch swimming and whisky drinking included. We had started in the sleepy and sodden town of Newton Stewart, mellow in its April coolness. Picking up sausages from the local butcher and slinging some whisky in my knapsack, we headed for Galloway Forest Park, Mother Nature’s laundry basket.

Its vast hills pile up like unwashed jumpers and discoloured cardigans. The 300 square miles of cardamom cream crevices are creased and unkempt; they sag wet and unworn. There are cuffs of imported evergreens and rocks that scatter like lost buttons. Its un-ironed lochs wrinkle in the wind and streams seam through the countryside.

Looking for a spot to swim, we find Black Loch a little past the point where our ears popped from the change in altitude. Motionless and mountain-fresh, it’s ideal for a breather and a dip. On one side stands a witch’s hat, made from small, clay bricks, near the other there’s a gentle waterfall with little interest in overdoing it.

Changing into a wetsuit on the grass, I draw a great breath and dangle my feet into the water. I watch them whiten and shrink. The wind wraps waves around me as my shoulders submerge and my adrenaline pumps. My eyes widen in ecstasy, my body prepares for survival and my maw bawls unprintable expressions. Then, as I start to swim, the mind settles and I can hear the clear of the countryside: the wind coughing in the trees, the rustle of retching reeds, lopped-legged lambs singing in their first spring.

By dusk, the briskness of the water would probably do Peter’s knee some good, but the clouds are closing in like curtains and Loch Dee is fighting fierce. We follow the Southern Upland Way as it leads down to the south, past trees uprooted by enemies bigger than themselves and lone lemon daffodils looking for love.

Bedding down in a bothy

White Laggan finally appears like a rugged shepherd overlooking his only known paradise. It’s a wee, rock-walled building with a Scottish flag painted on the side and a small chimney as a hat. Our relief in spotting it is giddying. We laugh and congratulate one another as any exhaustion evaporates.

Inside, the bothy is basic but has everything we need: a woodburning stove that’s shaded the stone with soot, and a makeshift washing line hanging across the mantelpiece. There are tea bags and firelighters and dried bracken and matchsticks. Wooden boxes rise from the floor as beds and pots and pans hang in its meagre kitchen.

Jon starts a fire as the sun flicks on the moon; it kicks and spits at the sausages that tan on the stove. We marvel at some of the clearest skies in Britain, the gloaming glinting over Galloway before the clouds pull in. There’s a mood of alleviation as we uncork a well-deserved whisky and drape our damp socks on the line to warm. At last, the conversation picks back up.

Where to stay
Newton Stewart is just moments from the entrance to Galloway Forest Park and the town’s hospitable and homely Creebridge House Hotel (tel: (01671) 402121; www.creebridge.co.uk) fuels the adage: the colder the climate, the warmer the welcome. With roaring open-face fires, thick tartan carpets and hearty, Scottish grub, this traditional country retreat has 18 en-suite bedrooms with low-beamed ceilings and snug sleeping quarters, ideal after a long day in the lowlands. Prices from £70 for a double room.

Staying in a bothy
The Mountain Bothies Association (www.mountainbothies.org.uk) maintains around 100 bothies across England, Scotland and Wales and can provide a map of their locations.

Remember to prepare well for your visit. Many bothies can just be a roof over your head, so do research before setting off as you may need to carry firewood, food and water. A good map of the area and additional mountaineering equipment are often essential.