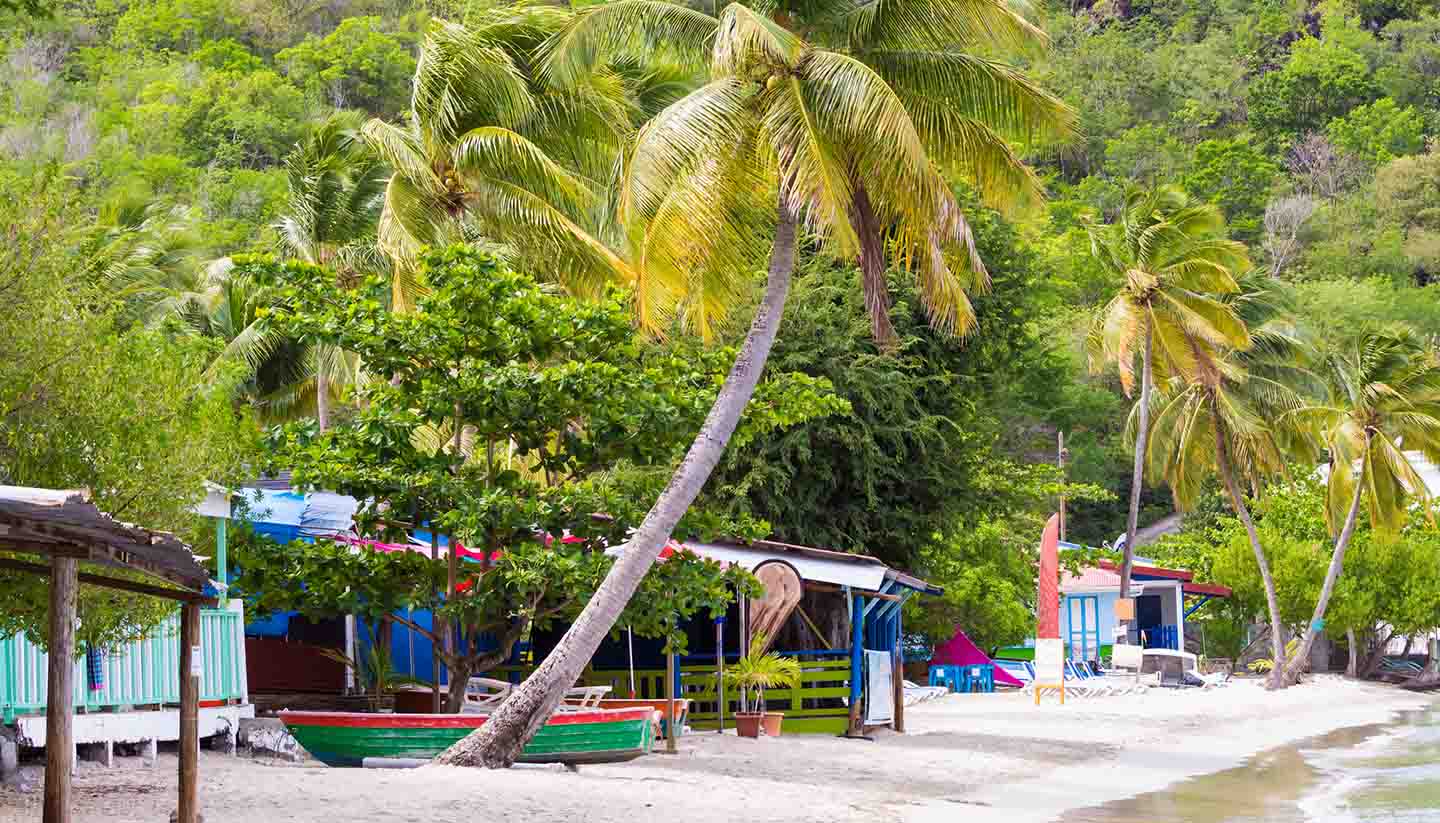 the IDs5246Fort-de-France
Places in Martinique

Things to see and do in Martinique

Pay a visit to the Musée Départemental, which tells the story of the island through a series of artefacts. Housed in a colonial building and focussing predominantly on Arawak and Carib Indian prehistory, the museum offers an interesting insight into island life before Christopher Columbus landed in the early 16th century.

Bathe in the beaches of Pointe du Bout

In the south of the island is Pointe du Bout, Martinique's major resort area. Sainte-Anne, Le Diamant and Les Anses d'Arlets have some of the island's best bathing beaches. HMS Diamond Rock, 4km (2.5 miles) off Diamant, is a rock which was designated a man-of-war by the British during the Napoleonic wars and rates a 12-gun salute from passing British warships.

Call in at the Cathedral of St-Louis

Inspired by Paris' Eiffel Tower, the Cathedral of St-Louis is a late 17th-century cathedral with a Roman-style bell tower. Peaking above the Fort-de-France skyline, the Gothic revival structure is a stand out sight in the capital and its bright, atmospheric interior is also the final resting place of many of the island's former governors.

Dive down and see shipwrecks

Visit the wrecks of the ships which were in the harbour on the day Montagne Pelée erupted – all but one of them went down in the disaster. Special submarines with glass windows take tourists to view the wrecks and the colourful fish that swim around them. It is also possible to dive down to get that little bit closer.

Explore the Pearl of the Caribbean destroyed by Montagne Pelée

Montagne Pelée, the 1,430m (4,700ft) volcanic mountain in the north, last erupted in 1902 destroying the city of St Pierre. Known as the "Pearl of the Caribbean", the remains are now a tourist attraction. Old stone stairways and the ruined theatre still exist, while its notable historic buildings like the old customs house are being rebuilt and restored.

Make a splash by snorkelling, skiing and sailing

Water based activities are abundant in Martinique. Whether you want to water-ski, explore the bays in a sailboat, scuba-dive, snorkel, or try your hand at spearfishing, many coastal resorts offer all. Take part in the Aqua Festival, a sailing event held each year around the Bay of Robert, or watch the yachting regatta held every June in Le Marin.

Pay a visit to a plantation at Le Carbet

Le Carbet is where Columbus landed on his fourth voyage in 1502. The Centre d'Art Paul Gauguin can be found in the town and contains exhibits relating to the painter's stay in the area, including the work he did whilst here. Nearby, the restored plantation of Leyritz welcomes visitors to stay in restored stone cottages.

Saddle up and explore the countryside

Horse riding is a very enjoyable way to see Martinique's lovely countryside, so saddle up for a coastline canter. For those that wish to see the island under their own steam will find easy hiking trails, whilst mountain biking and climbing are both catered for. There is also horseracing to be enjoyed at Hippodrome de Carrère, Lamentin.

Sampling Martinique's island rum is a must. Distilleries abound throughout the island and all of them welcome visitors for a sampling of their product. The St James Distillery at Sainte-Marie in the north operates the Musée du Rhum and Rhum Clement Domaine Acajou, in Le François on the east coast, also has a fine contemporary museum.

Wander the winding streets of Fort-de-France

Winding streets and colourful markets make the island's capital, Fort-de-France, a delightful spot. Seek out the park of La Savanne and the statue which commemorates Napoleon's Empress Josephine, a native of Martinique. Her home, La Pagerie, is one of the main tourist attractions and her birthplace, La Pagerie, has a museum chock full of her mementos.

Martinique Promotion Bureau in the USA