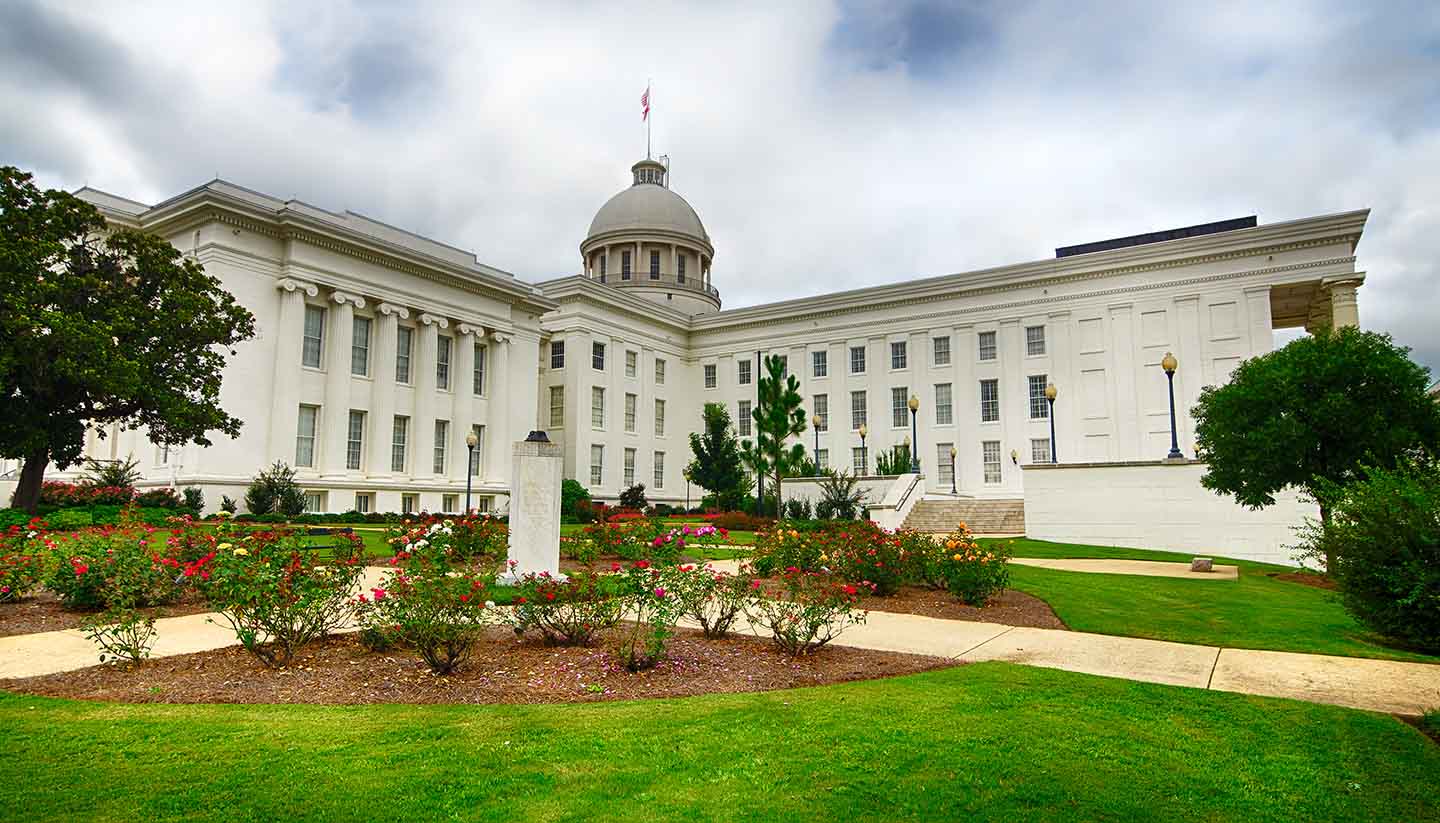 Prior to European settlement, Alabama was home to an indigenous population for thousands of years; first the Alabama people, followed by the Native American Cherokees, the Alabama, Chickasaw, and several other tribes. First settled by French in 1702, Alabama was controlled by many European powerhouses before becoming a US state in 1819.

Alabama’s booming economy of the 1820s and 30s was heavily reliant on the vital cotton industry; with perfect land for the crops, this state was the centre for cotton growth, with large plantations across the state relying almost exclusively on slave labour.

As the Civil War began, Alabama took the side of the south and conceded from the Union in 1861 to join the Confederate States of America. After putting up a fight, the Confederacy was defeated and the slaves on the cotton plantations across the state were freed by the 13th amendment to the US Constitution. They wouldn’t receive equal rights, however, for decades to come. After the Civil War, former slaves were still largely denied rights; they were unable to vote due to poll taxes or literacy requirements, inter-racial marriage was illegal, and schools were legally racially segregated.

As inequality continued, the Alabama economy suffered from an agricultural depression and a boll weevil infestation that eliminated cotton as a viable crop. The lack of work and unfair conditions in the early 20th century forced many African Americans to move north for work in what later became known at the Great Migration.

During the early 1920s the state diversified its economy and agriculture, especially cotton, faded into the background. Alabama now focused on the manufacturing industry, including automobile manufacturing and steel production.

The Civil Rights Movement of the 1950s and 60s took a strong hold in Alabama, where inequality was especially prevalent. The efforts of activists were rewarded as the Jim Crow laws were repealed and the US Congress passed several acts that outlawed major discrimination based on race or ethnicity and imposing qualifications used to deny voting rights to African Americans.

Since legal equality in Alabama, the population is booming and the newly diversified economy has taken off. Alabama’s cities Birmingham and Montgomery are major industrial hubs of the south and have solidified Alabama as a crucial part of American industry and history.

Nestled in the midst of America’s “Bible Belt,” a vast majority of the Alabama population is Christian, and many Protestant, though the Southern Baptist Convention has a large following in Alabama as well. The state also has smaller populations of Jews, Muslims, and Buddhists, among other religions.

As in many parts of the southern US, those in Alabama are incredibly polite with impeccable manners. ‘Ma’am’ or ‘Miss’ is usually used to address women and ‘Sir’ is used for men.

Religion is a major part of culture in Alabama; considered the most religious state in the US, prayer and faith are a large part everyday life of the local culture.

Alabama has an enormous sports culture; the University of Alabama football team, the Crimson Tide, is fervently beloved throughout the entire state. Tennessee, one of Alabama’s neighbouring states, is home to their fiercest and most detested rival, the University of Tennessee.

English is official language and overwhelmingly the predominant language spoken throughout the state. The local dialects, however, vary between the northern and southern portions of Alabama.