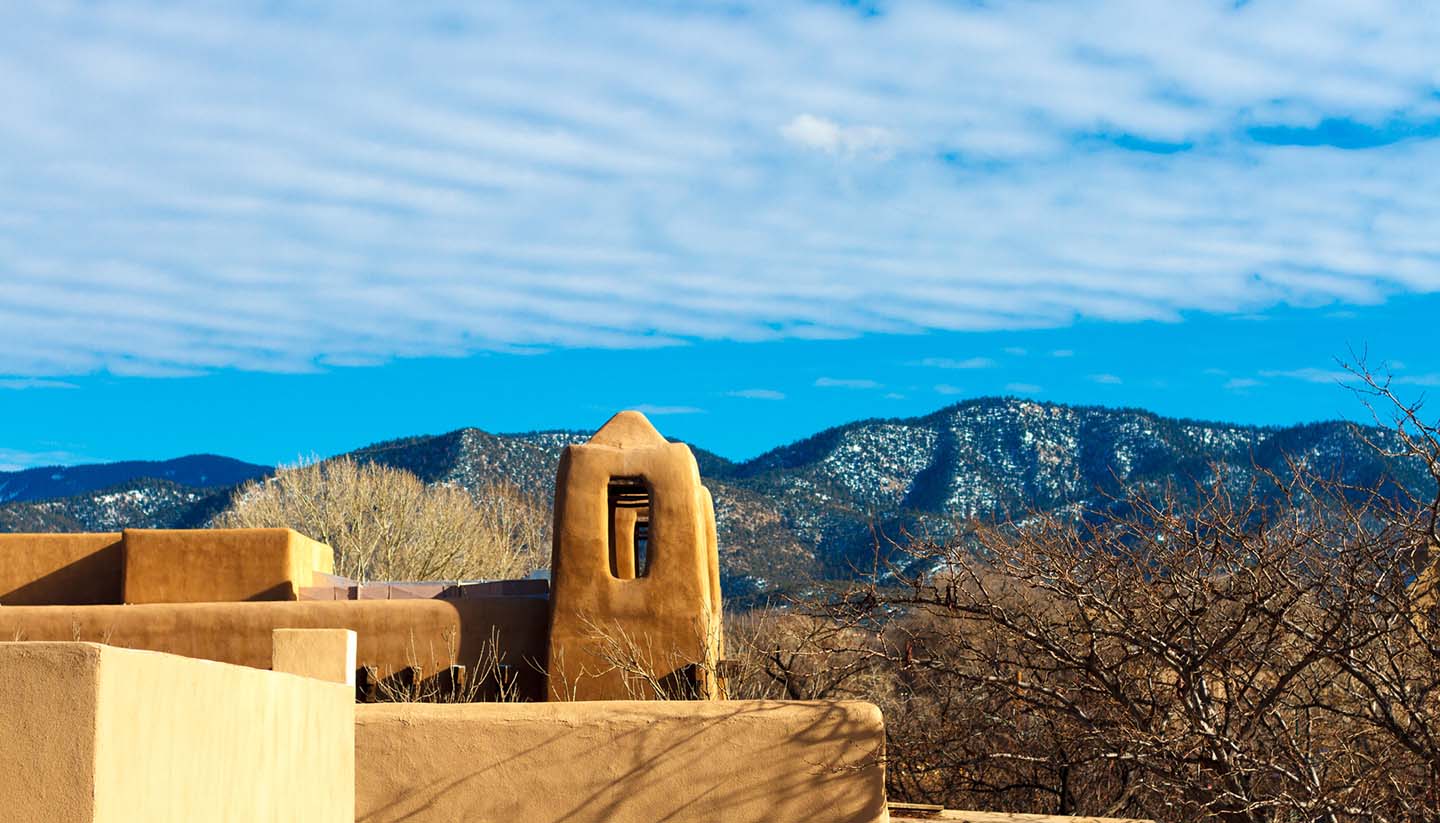 For over 400 years, Pueblo Indian, Spanish and Anglo cultures have crossed paths in Santa Fe, creating a sparkling and enticing city.

The oldest capital city in the United States was settled 13 years before the Mayflower Pilgrims landed at their Plymouth colony.

Long before the Europeans arrived however, a cluster of Pueblo Indian villages had sprung up in the 11th and 12th centuries. These are believed to have been deserted 200 years before the Spaniards arrived.

There were a few residents as early as 1607, but life in Santa Fe really kicked off with the arrival of conquistador Don Pedro de Peralta, who chose the ancient Pueblo Indian ruin of Kaupoge to plot the town site in 1609-10.

Spanish missionaries and soldiers busied themselves trying to convert and control the local Pueblo Indian population.

It didn’t go down well.

The region’s Pueblo Indians numbered around 100,000 and weren’t going to take the Spanish takeover lying down. In 1680, the indigenous peoples rose up against the Spaniards. They killed several hundred, and the rest fled to Mexico.

But by 1692, Santa Fe was back in the hands of the Spanish, after Don Diego de Vargas reconquered the city. Santa Fe prospered, and Spanish-Indian relations eventually improved.

Following independence from Spain in 1821, Santa Fe became the capital of the Mexican province of New Mexico. Americans began arriving, thanks to the opening of the Santa Fe Trail from Missouri.

Early on in the Mexican-American War in 1846, General Stephen Watts Kearny raised the US flag in Santa Fe, and New Mexico was ceded to the Americans two years later.

Santa Fe established itself as a buzzing cultural hub, opening museums, galleries and ensuring its unique adobe architecture was protected.

Did you know?
• The Santa Fe Fiesta has been held each autumn for over 300 years.
• Santa Fe is nicknamed the ‘City Different’.
• Santa Fe was designated a UNESCO City of Design, Crafts and Folk Art in 2005.

This renovated motor court motel offers exceptional comfort and southwestern style in rooms and suites. It has a swimming pool, patios and gardens within its grounds.

Inn and Spa at Loretto

Sharing grounds with the fabled Loretto Chapel, this 134-room hotel in Santa Fe exudes luxury. It features a fabulous spa, and hosts an Artists-in-Residence programme.

Spreading over six landscaped acres near the Plaza, this elegant boutique resort hotel in Santa Fe offers 157 rooms in casitas (small houses), a spa and a sophisticated bar and restaurant in the Staab House . Try for rooms with fireplaces and patios, located above the spa.

A collection of 53 studios and casitas in a historic adobe compound three blocks from the Plaza provide guests with one or two bedrooms, living rooms, fireplaces and mini-kitchens.

The former Santa Fe Budget Inn has been updated to an attractive facility, but still represents very good value for money. The motel has 154 rooms, swimming pool, computer dataports, in-room coffee and a good downtown location.

This Asian-themed spa and bathhouse offers serene lodging in Zen-inspiring casitas or an Airstream trailer restyled as a sleeping car. Amenities vary from basic to more elaborate, with living room, fireplace, TV and balcony.