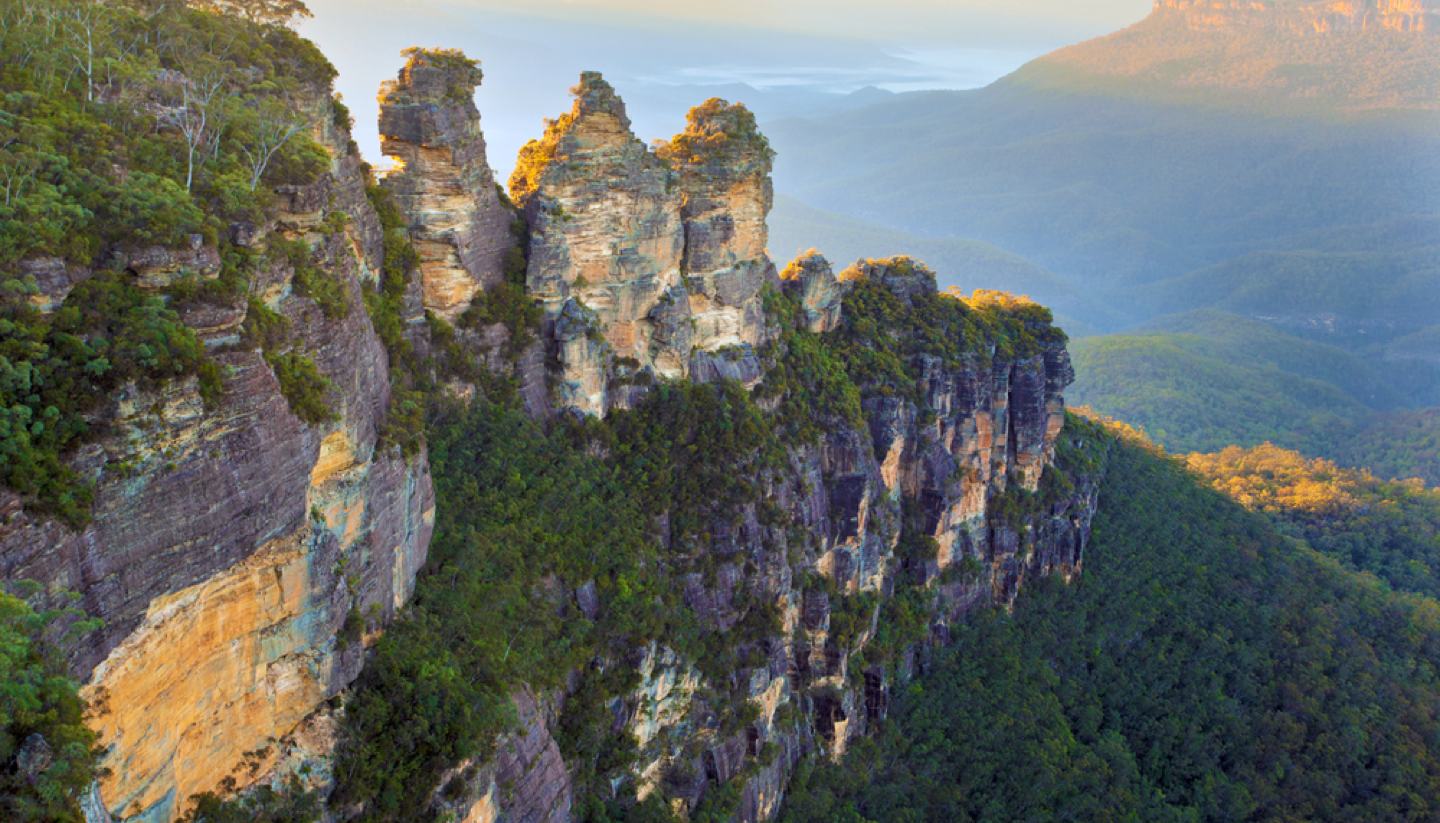 Things to see and do in New South Wales

74 km west of Sydney lies the World Heritage-listed Blue Mountains. As you rise above the city, all your worries melt away amongst the densely forested eucalypt woodlands and heaths. Dotted with a confetti of charming villages and farms, you’ll find a veritable array of unique cuisine, friendly hospitality and sweet cottages. Nature lovers will revel in the sensational views from the Three Sisters at Echo Point in the Leura/Katoomba region; with a lookout offering scenes over the dusky blue Jameson Valley. It is also a site of special cultural significance in aboriginal culture. The dreamtime legends of the valley are easily investigated at the nearby Echo Point Visitor Centre.

Uncommercialised and unpretentious Broken Hill features ancient landscapes and thriving silver trade. The town was built on the site of the world’s largest silver, lead and zinc mines. There’s plenty of things to do here, including mining tours, heritage walks and outback excursions to Mutawintji National Park, where you can see fascinating examples of aboriginal rock art. In recent years artistic pursuits from a growing population of writers, artists and sculptors have flourished providing a unique impression of the outback.

Go dolphin and humpback whale watching; you can spot migrating whales along the coast, and good places include Cape Byron between May and November and Hervey Bay between early August and late September.

Sniff, swirl and sip some exceptional Australian wines in the Hunter Valley wine district, famous for winemakers such as Dalwood Estate, De Iuliis and McGuigans. It is a two-hour drive north of Sydney and is Australia's oldest wine region. Boasting over 120 wineries and many restaurants serving local produce, this area is ideal for a romantic getaway.

It's a two-hour flight from Sydney, but this World Heritage-listed island in the Pacific is the place to escape to. At just 11 km long, only 400 visitors are on the island at any one time. Those who visit enjoy snorkelling around the coral reef with over 500 species of fish, strolling the beach forests or venturing up Mount Gower for panoramic views.

Couple stunning scenery with the nail-biting fun of windsurfing, kayaking and white-water rafting in the Great Lakes district. Its most popular resort is Port Macquarie, a sophisticated town set in a deluge of greenery with a large koala population. Nestled against the Pacific Ocean, this coastal hotspot boasts 17 beaches, isolated estuaries and the charming and petite Hastings River region, which offers an appealing array of wines and gourmet foods.

The Grand Pacific Drive takes you from Sydney to Wollongong, down to Shoalhaven, through coastal rainforest, villages and across the vast Sea Cliff Bridge. Alternatively, the Greater Blue Mountains Drive is linked with discovery trails to help you appreciate this World Heritage Area.

New South Wales boasts a veritable array of countryside landscapes, which are best experienced at its many parks and nature reserves. The Royal National Park, just 32km (20 miles) outside Sydney, is the oldest park in Australia and the second-oldest in the world. Go for bushwalking, hiking, whale watching and fishing. It is rich in Aboriginal history, with Audley a good place to start at.

Ski, cross-country ski or snowboard in the Great Dividing Range or the Snowy Mountains: the season generally runs from June to October. Thredbo has the longest and best ski runs.

Get into some serious mountain country and have your breath taken away at the sight of Australia's majestic highest peak, Mt Kosciuszko. The Australian Alps are covered in a smattering of twisted snow gums, which when dusted with snow, turn into a hub for snow sports. Shredders can get their kicks with a wide array of runs and resorts, catering for everything from snow-shoeing to snowboarding. Perisher is the largest resort, whereas Thredbo boasts a charming village and longest run. The season runs from June – October. It is also a centre for cold climate wines – Tumbarumba is the best region to sample some local brews. The main visitor centre is at Jindabyne.

Tour the gorgeous south coast where traditional country towns such as Eden, Tathra and Kiama have escaped the onslaught of mass coastal development. A string of national parks protect magnificent bushlands and spectacular coastal areas all the way to Sydney. Watch whales migrating from Wollongong to Kiama or head to Jervis Bay for white sandy beaches.

Do as the locals do and paddle out at the world-famous beaches of Bondi and Manly in Sydney. Surf with the big boys at Bronte, Coogee, Collaroy, Palm and Byron Bay beaches. Port Macquarie and Coff's coast in the north of the state are great surfing territories with Scott Dillon's Legends Surf Museum an ideal place to visit when on dry land.

Watch the annual yacht race from Sydney to Hobart in Tasmania, starting on 26 December and covering over 2,000km (1,250 miles). The first day at Sydney Harbour attracts huge crowds and spectator craft, generating a great atmosphere as the fleet sets sail.

Don your most colourful outfit and join in with Australia’s most vibrant extravaganza - the world-famous Sydney LGBT Mardi Gras. With a glittering parade of floats and performers and a citywide explosion of colour and culture, the festival is attended by hundreds of thousands of people each year. Held in February, highlights of the two-week event include the launch, the Oxford Street parade and post-parade event and Harbour party.

Take in Sydney's stunning Royal Botanic Gardens with an Aboriginal tour guide. Learn about the heritage of this area and the culture of the local Cadigal people, the original inhabitants of the city area. The Cadi Jam Ora Gardens contain a colourful 50-metre-long storyline on historical events, and you may even get a chance to experience some traditional dance, crafts and bush food. Walking tours take place on Wednesdays, Fridays and Saturdays.

Step onto the Skywalk at the top of Sydney Tower which enables the brave to literally 'walk across the city skyline', along glass overhangs 268m (880ft) above the ground. Enjoy views as far afield as the Central Coast and the Blue Mountains.

Step back in time in The Rocks area (the site of Australia's first European settlement), which features cobbled streets, gas lamps, craft shops and small restaurants. This district offers a great introduction to Sydney's maritime history, as well as providing some of the best views across to the Opera House and Harbour Bridge. Food-lovers should swing by on Fridays for a taste of heritage at The Rocks Foodies markets and browse for gifts and treats on the weekends at the traditional Rocks Markets. Art buffs will also find their place at the Museum of Contemporary Art Australia, which hosts an engaging programme of exhibitions year-round.

Rock climbing and mountain walking attract many visitors to Warrumbungle National Park, whose 'Grand High Tops' rank high among Australia’s most spectacular walks. Track through the remnants of ancient volcanoes and climb steep rocky footpaths to reach iconic formations such as the Belougery Spire. In the spring this area erupts into a sea of wildflowers and becomes an ideal spot for birdwatching.

The Willandra Lakes Region is world-renowned as one of the earliest-known ritual cremation sites. The 370,000 hectares (913,000 acres) of semi-arid country is home to a vast system of ancient lakes and sweeping dunes. In 1968 the archaeological discovery of skeletal remains indicated that Aborigine communities had inhabited the area 40,000 years ago. Nowadays, you can take a trip to the Mungo National park and spend a day trekking through its otherworldly landscapes.