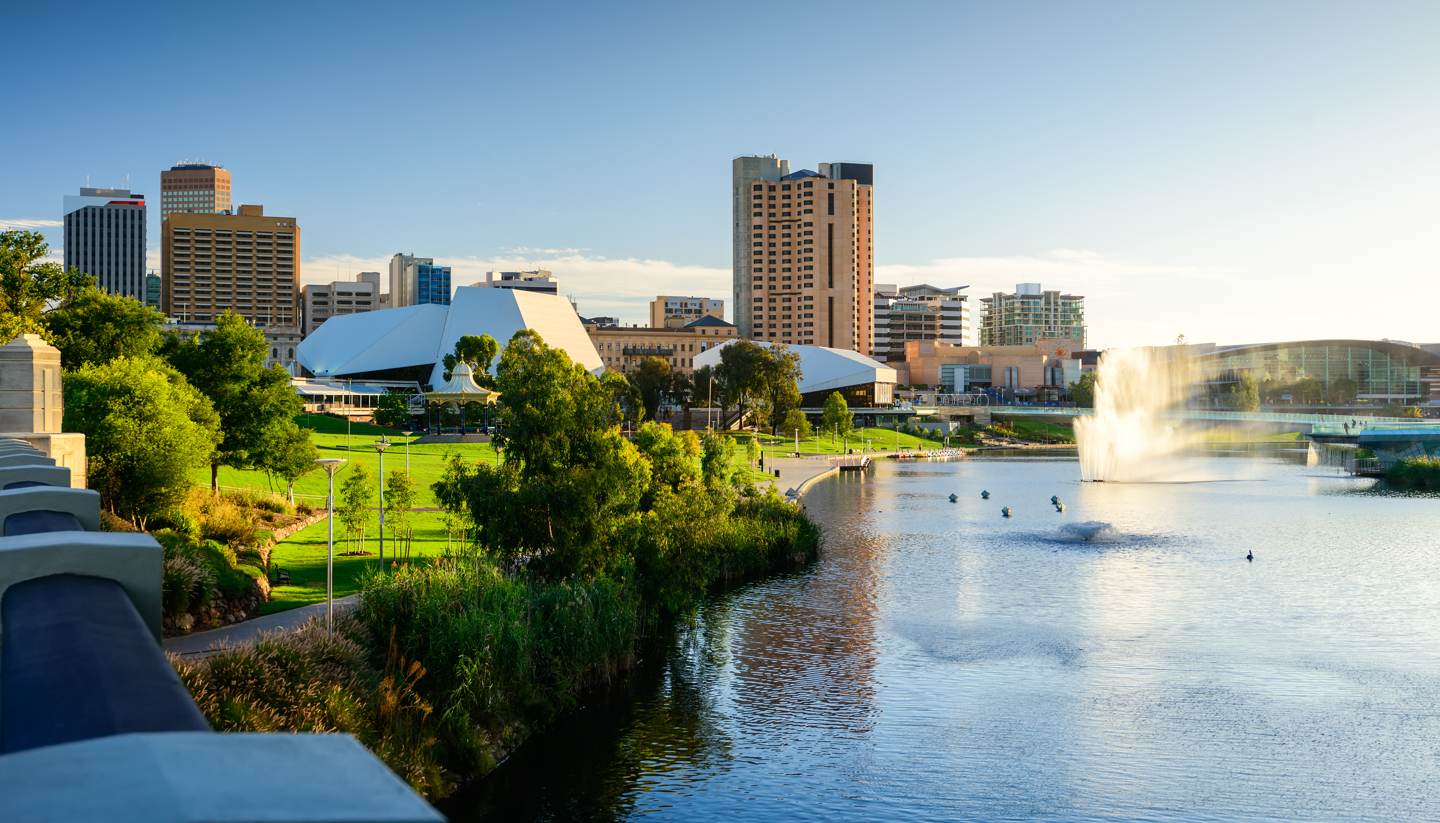 the IDs1368Adelaide Airport
Places in Adelaide

Like most Australian cities, Adelaide came into being in the 1800s (1836 to be exact), although prior to the arrival of Europeans, the surrounding land was settled by Aborigines. Known to the locals as Tandanya (‘The Place of the Red Kangaroo’), more than 10,000 Aborigines were thought to have been living on the Adelaide Plains when the settlers landed in 1836.

The location for the new city was chosen by Colonel William Light, who picked a spot on the banks of the River Torrens that could force rainfall from the nearby Adelaide Hills. Underneath a gum tree in modern day Glenelg North, British governor John Hindmarsh proclaimed the colony South Australia on 28th December 1836.

Colonel Light also planned the city, laying streets out in a grid system and allowing for plenty of parklands and open space. In the beginning, however, Adelaide was a farming community, relying on wheat and sheep runs for sustenance.

Things changed in the 1840s when copper and silver were discovered nearby. In 1852, a gold rush ensued when significant quantities of the mineral were found. As a result, the city expanded and the University of Adelaide, the South Australian Art Gallery, and the Happy Valley Reservoir were all in situ by the dawn of the 20th century.

Waves of European immigrants followed, particularly after WWII, and the city built a university and Adelaide Airport in 1955. It wasn’t all smooth sailing: a large earthquake in 1954 damaged Blackwood Hospital, the Victoria Hotel, the Post Office clock tower and St Francis Xavier Cathedral, leaving inhabitants shaken.

Nevertheless, the city continued to grow and built its reputation for culture over the 1960s and 70s, culminating in the opening of the Festival Centre by Queen Elizabeth in 1977.

Today, Adelaide continues to grow and attract emigrants from all over the world, with progress and expansion looking set to continue into a fourth century.

Did you know?
• Adelaide was named after Adelaide of Saxe-Meiningen, queen consort to King William IV and aunt of Queen Victoria.
• Colonel William Light, the man who surveyed and planned Adelaide, did the same for Christchurch in New Zealand. The cities are now twinned.
• Adelaide is the only major Australian city that didn’t begin life as a penal colony.

Doubling as a hotel and a pub, this historic location dates back to 1883, and is conveniently placed opposite the Adelaide Central Market and a short walk from the Adelaide Railway Station. Although the rooms are small, the amenities are numerous: a game room with complimentary snacks, outdoor dining and live entertainment, and an art gallery. The guest list is mature—you must be 16 or older to stay.

Located in the Central Business District, the Ibis Hotel boasts 311 fresh and modern rooms, a ground-floor restaurant and bar with world-class food, and balconies so guests can enjoy the fresh Adelaide air. Wi-Fi, online check-in and an all-you-can-eat breakfast buffet are complimentary.

Luxury suites and motel rooms await at the Largs Pier Hotel. Built in 1882 and still dominating the seafront by Largs Bay Pier, this is the hotel where AC/DC and Jimmy Barnes played before they were famous. Heritage rooms are a sensory mix of lofty ceilings and cutting edge bathrooms, complete with king-size, four-poster beds. One suite also contains a dining room. The hotel is the site of the very first drive-through bottle shop in Australia.

This artsy hotel stands out not only for its green and silver modern-style exterior, but also its unbeatable location in the heart of North Adelaide. Each of Minima Hotel’s 46 rooms was painted by a local Australian artist, giving every room a unique feel and aesthetic. Guests can look at the website and request a specific room or be surprised when they walk through the door. Expect decorations ranging from abstract ocean scenes to neon sculptures to a blown-up aboriginal alphabet.

At the Majestic Roof Garden Hotel, the guest experience is in the name—expect a gorgeous rooftop garden overlooking the city to compliment the usual amenities of a modern hotel, including free Wi-Fi, 24-hour room service and complimentary breakfast. The location is great for exploring downtown as well.