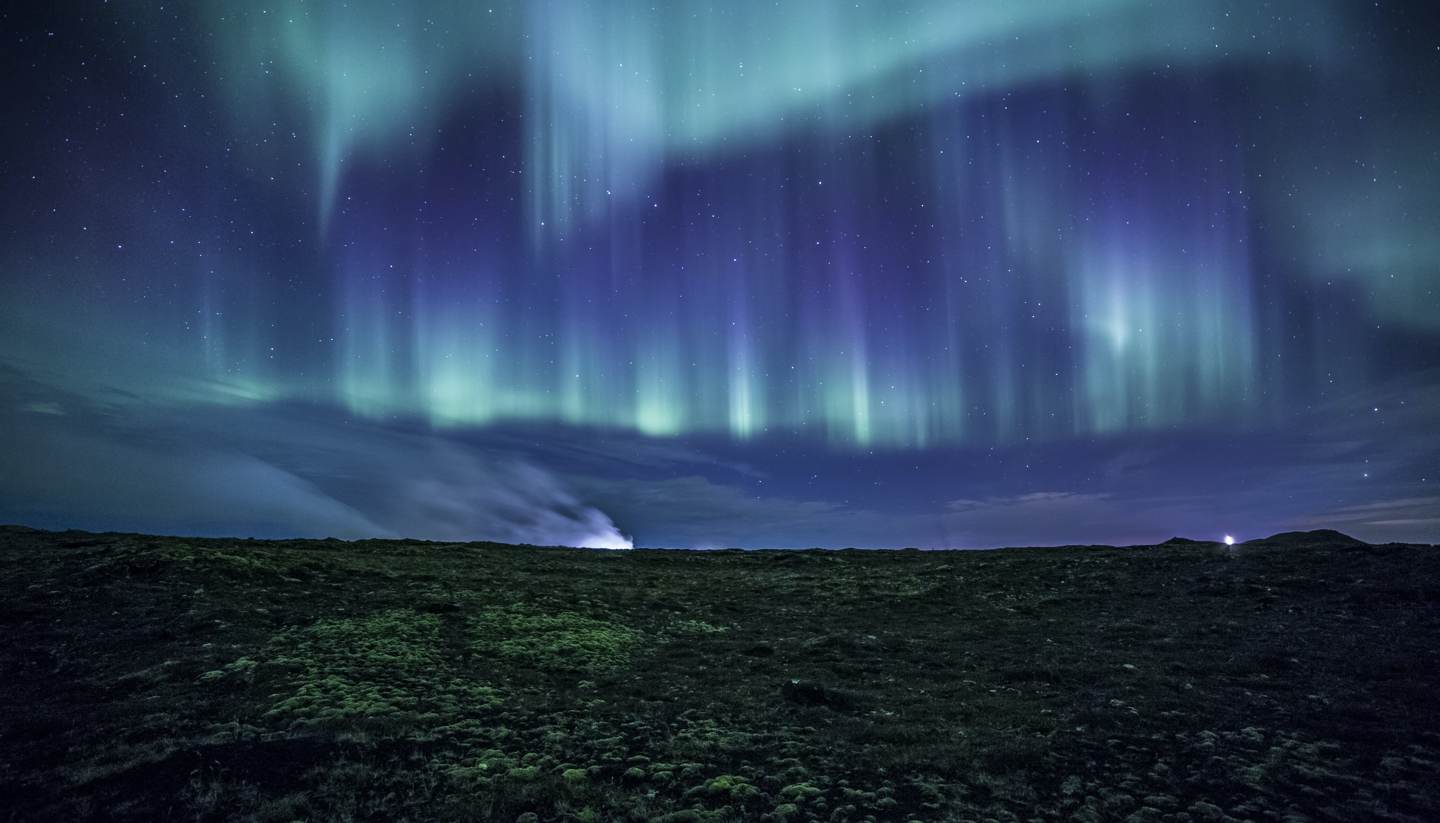 Atlantis and the Kingdom of Asgard may be lost forever, but here are five places that you can still experience legends and supernatural forces

1. Walk among elves in Iceland

In Iceland, humans are not the only ones who call it home. Many locals believe that elves live in the lava fields across the country too.

In 2013, the Icelandic Supreme Court halted a highway project that was going to snake through the Gálgahraun lava field, near Reykjavik. The campaigners considered the ancient field and in particular, a 12-foot-long rock within the area, to be the legendary Ofeigskirkja, an “elf church” from pagan Norse myth. The project finally went ahead after a local seer called for a pact between elves and men, and the authority agreed to move the church to an area with similar “elf dwellings”.

While sensational news coverage of that particular highway dispute brought international fame to Icelandic elves overnight, it surely wasn’t a one-off exercise. People in Iceland have long been building their roads and houses away from sacred rocks that the locals believe to possess supernatural significance.

The top lava fields to visit in Iceland are Eldhraun, Geirlandshraun and Skaftáreldahraun. It’s important that you stay on the designated path when you’re there, as lava fields are incredibly fragile, plus you should also be mindful of elves. 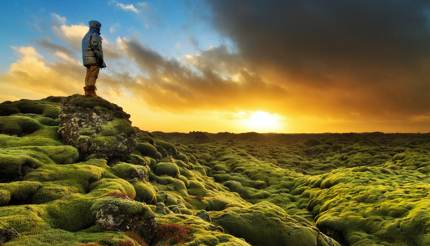 2. Let the dragon sleep in China

Shh… a dragon is sleeping beneath the busy streets of Shanghai.

In Shanghai, China’s biggest city, there is a pillar decorated with nine dragons at the intersection between North-South Elevated Road and Yan’an Elevated Road. The story goes that during the construction of the intersection in 1993, builders were unable to budge the ground beneath the site of the intersection’s now-famous pillar. Exhausted of solutions, the construction team called the honorary abbot of the Jade Buddha Temple on Anyuan Road, not far from the intersection. After a long prayer, the abbot informed the team that they had awoken a sleeping dragon beneath the worksite. Due to this rude awakening, the dragon was preventing the pillar from being installed. To please the dragon, a glittering pillar was created in its honour, enabling the ground to be removed and work to continue finally.

At that time, the abbot also said that since he had revealed this heavenly secret, he feared that his time on earth would come to an end soon. Coincidentally, he passed away in less than two years after the first prayer was said.

Whether you believe in dragons or not, this towering golden pillar adorned with nine beautifully designed dragons is undoubtedly worth a drive-by – just try not to wake up the dragon as you go by. 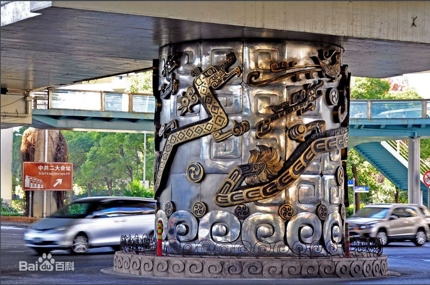 3. Be spooked by dolls in Mexico

La Isla de las Muñecas (Island of the Dolls) sits in the Xochimilco canals, just 28km (17 miles) south of Mexico City and it may not be a place you want to visit at night. Dolls – most of them broken and in various stages of deterioration – are hung from trees across the island.

According to the locals, Don Julián Santana, the caretaker of the island, hung the first doll up in memory of a girl who had drowned in one of the canals. After this, he was said to be changed by some unknown forces as he began to hear the cries of the little girl. In an attempt to please the spirit, he collected and hung dolls all over the island. But alas, after 50 years of doing so, he was found drowned in the same spot as the girl.

The island became a tourist attraction following the death of Santana. To get there, you need to take a boat from Embarcadero Cuemanco or Embarcadero Fernando Celada – but beware, some superstitious boaters may refuse to take you there. 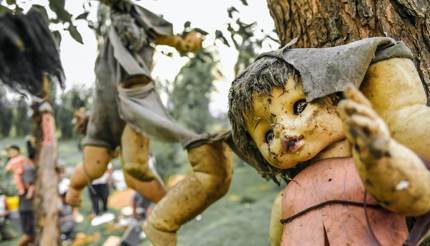 4. Visit a crop circle in England

Much to the farmers’ annoyance, large strange patterns mysteriously form overnight in the grain fields of England. The patterns, some are relatively simple while others are highly intricate, tend to share one similarity – they are created with surgical precision.

As they seem to appear overnight, theories about their creations abound. Some insist that they are made by aliens or some unexplainable forces, while others believe they are the handiwork of humans who toil under darkness to create the patterns.

In September 1991, two British men – Doug Bower and Dave Chorley – went public to announce that they were responsible for many crop circles appearing in southern England. They claimed to use simple four-foot planks with straps which they pulled around by hands. But the confession has been controversial, to say the least. Many argue that while the simple technique may have been used to create smaller and simpler circles, it can’t possibly create the more complex ones. Also, the way the crops are being laid and the elevated readings of certain types of radiation in some circles suggest that some unseen forces are involved.

Southern England, particularly around Wiltshire, has had many crop circles appear. They may appear in April and May in canola fields, May and June in barley fields, or June to early September in wheat fields. If you can’t see a real one on the day you are visiting, check out the Crop Circle Exhibition and Information Centre in Pewsey, Wiltshire. 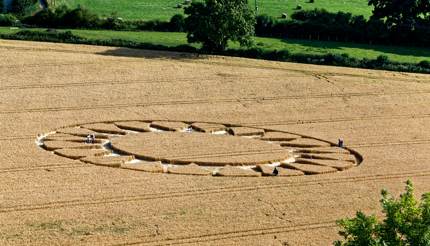 A crop circle in Wiltshire, England

5. Connect with spirits in Peru

If you look to connect with some supernatural forces at a deeper level, such as having an out-of-body experience or floating in an unknown realm, then take a 90-minute flight from Peru’s capital city Lima to Iquitos, the gateway into the untouched wilderness of Peruvian Amazon.

Intrepid travellers come here to seek shamans or medicine men for a guided healing ritual involving ayahuasca, a tea made from leaves and vines that contain powerful psychedelic compounds.

Each ayahuasca retreat can last from three days to a week, and each shaman has his own ayahuasca recipe. As chemicals in ayahuasca aim to alter one’s state of consciousness, the effects vary from person to person. It is not all laughing and euphoria either, one can easily hallucinate or experience an emotional intensity so powerful that crying and vomiting are a normal part of the process.

Apart from ayahuasca, visitors to the Peruvian Amazon can also experience other medicinal plants such as Ajo Sacha, which is said to unblock one’s energy flow and treat arthritis. Paico is another local favourite – a tea made from Paico plant is said to kill intestinal parasites if drunk for three days. 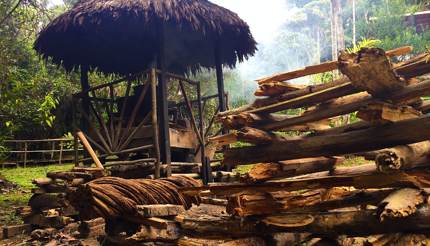