Fast-paced, vibrant and bursting with attractions, New York City invites you to take a bite out of the Big Apple, even if you only have 24 hours to spare

You’ve seen it in the movies, on TV shows and heard endless tales about the glitz and glamour of New York City. Probably best known for the neon-lit Times Square, it’s also a centre of culture, shopping, music and food. With so many exciting venues to choose from, here’s a guide to help you optimise your 24 hours in New York City.

Start your day in New York with an authentic bagel, one of the city’s finest culinary inventions. For the ultimate bagel experience, head to Katz’s Delicatessen (205 East Houston St), a classic New York deli, famous for the infamous orgasm scene in When Harry Met Sally. Try a pastrami sandwich or a bagel with cream cheese and lox (salmon). For your daily caffeine boost, walk 10 minutes north to Abraço (81st East 7th St), a cosy, family-run spot offers freshly ground coffee and a friendly neighbourhood atmosphere.

Visit the Statue of Liberty, a symbol of the United States and one of the most notable landmarks in the world. Take a ferry from Battery Park and upon arrival, you can climb up to the crown of Lady Liberty for a spectacular view of Manhattan over the Hudson River. On Liberty Island you can choose to roam around on your own or sign up for the Ranger Guided Tours at the Visitor Centre. Covering the history and story of the island, this guided tour is informative and engaging. It’s recommended that you reserve your ferry and crown-access tickets in advance and be aware of illegal ticket vendors. 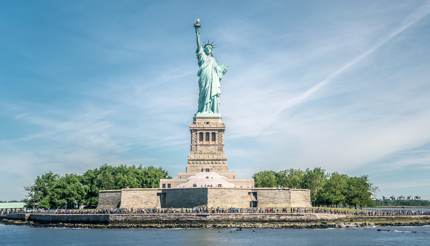 The Statue of Liberty on Liberty Island

To escape the hustle and bustle of the city, head to Central Park where you can stroll through over 800 acres of beautiful gardens, towering trees and grand fountains. Worthy diversions include the Central Park Zoo (East 64th St) and Bethesda Fountain with its iconic bronze angel statue casting a protective eye over the visitors in the centre of the terrace.

End your jaunt with a stop at the American Museum of Natural History (Central Park West & 79th St) for a chance to see some of the most amazing natural wonders of the world from mammoths to dinosaurs to the mo’ai, the mysterious statues of Easter Island.

For lunch, check out the original Shake Shack (Madison Ave & East 23rd St). Nestled in the heart of Madison Square Park, this little shack is the popular burger joint’s original location. The queue is usually around 15 minutes long, but the best burger, shake and fries in New York are well worth the wait, especially on a warm day in the city.

Start your afternoon off by getting to grips with the scale of New York and for that, nothing beats the view from the Empire State Building (350 5th Ave). Home to many businesses, this towering skyscraper even has its own zip code. It has also played a starring role in hundreds of films including King Kong, West Side Story and Home Alone 2. Follow in Macaulay Culkin’s footsteps and head up to the observation decks on the 86th and 102nd floors for an unbeatable city view. Be sure to purchase tickets ahead of time on the building’s website. 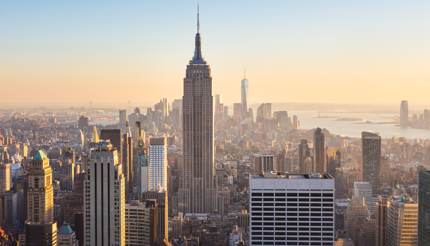 New York is a shopper’s paradise. Lined with glamorous stores like Tiffany & Co, Gucci and Louis Vuitton, Fifth Avenue is a must for shopaholics. It’s also a magnet for the many celebrities who have homes in the close-by Upper East Side, so you can do some shopping and celebrity-spotting all at once.

While the glittering boutiques and department stores of Fifth Avenue are the most famous, for a real New York shopping experience, head to SoHo. Side streets like Broome and Prince are a real treasure trove of vintage fashion and eccentric emporia. Ritual Vintage Clothing (377 Broome St) is a great place to unearth amazing finds. About a mile up in Greenwich Village, Hamlet’s Vintage has men and women’s clothing from the 1940s to the 1980s.

Conventional wisdom dictates that a visit to New York is incomplete without catching a show on Broadway, where 41 professional theatres compete to entertain you with a fantastic range of world-class performances. For budget-conscious travellers, head to TKTS Discount Ticket Booth in the heart of Times Square and grab same-day, half-priced tickets for some of the best shows on Broadway. 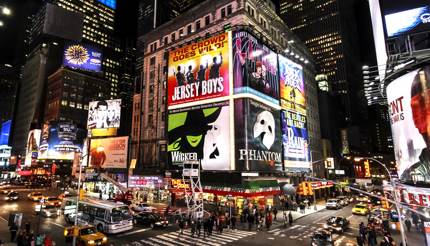 Figuring out dinner won’t be difficult in a city filled with some of the best American and international cuisine. Just steps away from Broadway is the famed Restaurant Row with a plethora of restaurants to choose from including Becco (355 West 46th St), a circa 1933 Italian restaurant best known for its pasta tasting menu and an extensive value-for-money wine list. For a taste of the south, check out Bourbon Street Bar & Grille (346 West 46th St).

If you thought New York City was high-energy during the day, you should see how it comes alive at night with revellers checking out bars and clubs from the East Village to the Meatpacking District.

For a good laugh and a drink head to Gotham Comedy Club (208 West 23rd St) immortalised by several movies and television shows including Last Comic Standing.

Next, head to 230 Fifth Rooftop (230 5th Ave) for a drink with a view. This is New York’s largest outdoor rooftop garden and doesn’t disappoint with live music every night and mesmerising views of the skyline of New York. 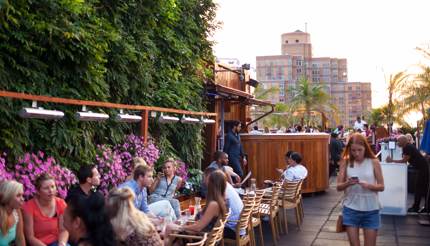 People relaxing at the 230 Fifth Rooftop