Fighting the tide in Nova Scotia 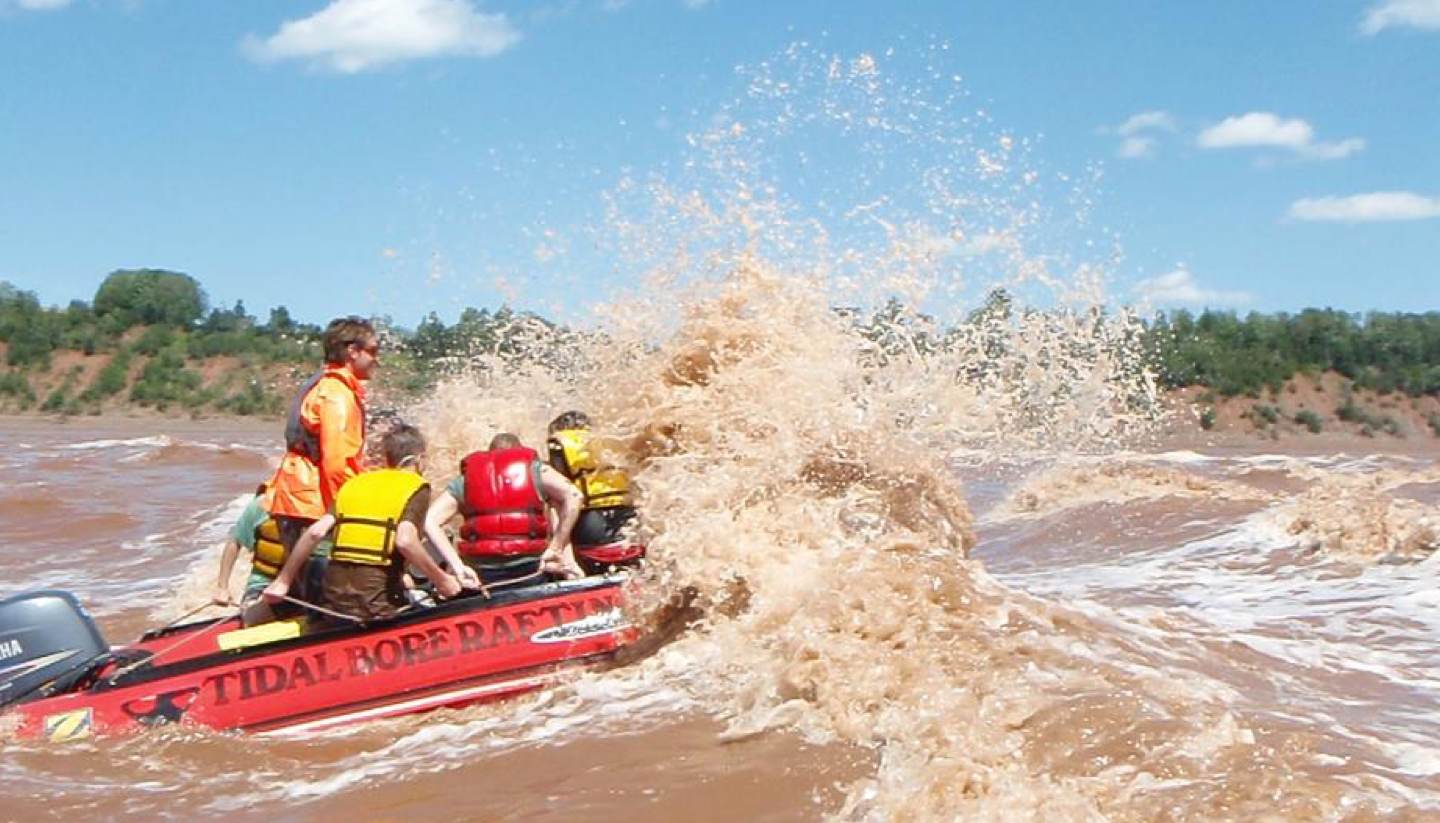 Tidal bore rafting is testament to the timeless appeal of mindlessness. Gavin Haines reports from the brutal Bay of Fundy.

A wall of cold, muddy water hits me square in the face. I rub my eyes clear and realise the girl who had been sitting next to me has vanished; the monstrous wave appears to have carried the poor lamb overboard.

Scanning the swirling mess around me I spot her bobbing in the water next to the boat, her face etched with a mixture of excitement and terror. I reach out and drag her aboard as the waves continue to rain upon us. Welcome to Nova Scotia.

This experience might sound like an unfolding maritime disaster – the tormented memories of a shipwreck survivor, perhaps – but in the Canadian province of Nova Scotia this is a sport, and they call it tidal bore rafting.

Exclusive to Nova Scotia, tidal bore rafting is made possible by unique environmental conditions in the Bay of Fundy, which conspire to create the highest, most powerful tide in the world.

Every day, approximately 200 billion tonnes of water gushes in and out of the bay, an unstoppable torrent that hits a bottleneck at the Shubenacadie River estuary where it surges upstream like a giant tsunami.

As this tsunami rolls over sandbars in the river, monstrous waves are formed, some as big as 3.5m (11.5ft). It is those waves that make tidal bore rafting possible, those waves we have come to ride today.

“You’ve picked the best day to come rafting,” says our captain, Travis MacPhee, grinning as the next set of waves bear down on us. “These are the biggest waves so far this year.”

Back on dry land I had thought Travis to be a calm, unassuming kind of guy. He talked timidly about the unique geology of the region and pointed out the menacing figures of bald eagles in trees along the riverbank.

But in the same way the tidal surge had transformed the previously calm Shubenacadie River into a torrent, it had also turned Travis into a lunatic. You could see it in his eyes: he wanted to fight the tide and we were here for the ride.

“Okay,” he says, preparing us for the next assault. “We’re going to fill the boat with water and then…” “Hang on a minute,” I interrupt. “What do you mean fill the bloody boat with water? It’s a boat; they’re not supposed to be filled with water.”

He smiles a mischievous smile and explains that we need the weight of the water onboard so we don’t flip over. I knot my brow and wait for the waves, which break over the inflatable dingy, filling it with brown seawater. And I mean filling it; only the rubber bow and outboard motor are visible, the rest of the boat is submerged.

As the Fundy continues its surge, the waves get stronger. They crash over us relentlessly, each one stronger than the last. We whoop and laugh uncontrollably, until our mouths fill with salty water. Somehow I manage to stay aboard, but others are thrown over – in the brief respite between breaks we fish them out of the torrent.

The waves gradually dissipate until all that’s left is a fast-flowing river. “Jump in if you like,” says Travis. “There are no rocks.” Already drenched I leap from the boat where I become a passenger to the tide. The brute force of the Fundy whisks me along like a piece of driftwood; trees along the riverbank pass by in a blur.

Tidal bore rafting is madness, but it’s also intoxicatingly good fun. Forget golf or yoga or frying on a beach, if you really want to escape on holiday, come and pick a fight with the Fundy. Because it doesn’t give a hoot about your career or your relationship status or the economy – and it’ll make sure you’re too busy clinging on to care either.

Getting there
Air Canada (www.aircanada.com) flies non-stop from London Heathrow to Halifax, Nova Scotia four times a week. Icelandair (www.icelandair.co.uk) flies to Halifax from Heathrow with a free stopover in Reykjavik.

Getting around
Hiring a car is the best way of getting around Nova Scotia. Operators include Enterprise, Budget and Thrifty.

Hitting the waves
The Tidal Bore Rafting Park in Urbania (tel: +1 800 565 7238; www.raftingcanada.ca) offers rafting tours from May to October every year. Those wishing to stick around afterwards can hire one of the park’s cosy woodland cabins and while away days hiking and birdwatching in the stunning riverside location.

While you’re there
From scenic road trips to UNESCO-listed cities, Nova Scotia (www.novascotia.com) has plenty more to offer travellers. Read our guide to the Canadian province here