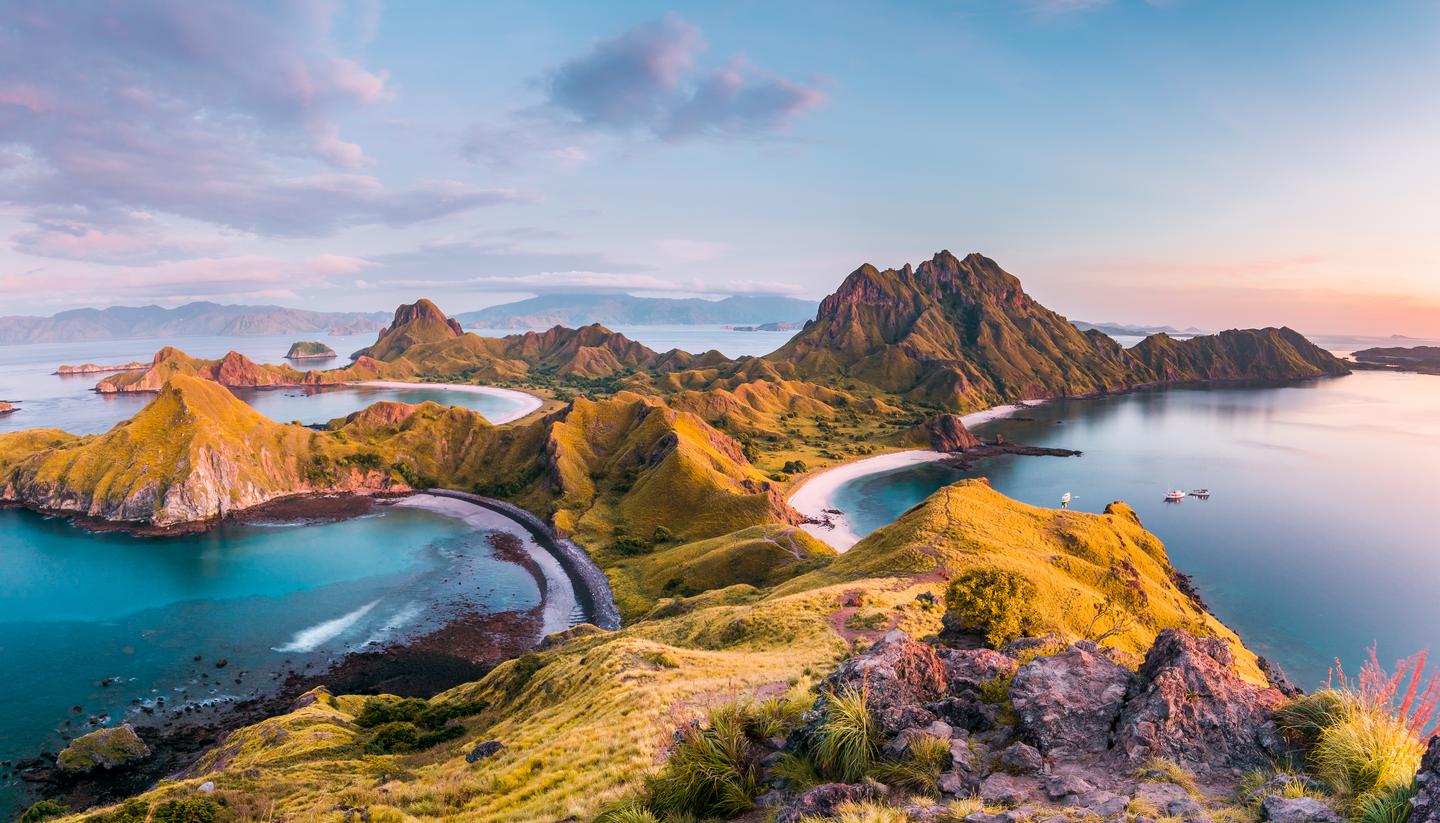 With over 18,000 islands, 300 ethnic groups and approximately 750 languages and variants, Indonesia is a truly fascinating destination, especially for a traveller who loves to be on the go. It is no surprise that many visitors want to venture beyond the tourist traps to get the fullest possible picture of Indonesia.

One of the best ways to do that is to ‘island hop’ and work your way through some of Indonesia’s islands – don’t worry, we aren’t suggesting that you visit every island because we’ve curated a list of the 10 best islands that may tickle your fancy.

Located north of Semarang, Central Java province’s capital city, the Karimunjawa Islands are full of biodiversity, rainforests, and coral reefs. Designated as a Marine National Park and consisting of 27 islands spread across the calm Java Sea, this idyllic archipelago is extremely camera-friendly – its stretches of white-sand beaches and turquoise seas are popular Instagram backdrops.

The underwater flora and fauna in Karimunjawa are incredible. Among the most significant are the 444 species of fish, 11 species of seagrass and nine species of seaweed. The favourite snorkelling spots are Gosong Island, Menjangan Kecil Island, Tengah Island, and Tanjung Gelam Island.

Only five of the 27 islands are inhabited and they are home to a variety of cultures – predominantly Javanese, but some people of Buginese and Madurese ethnicity also live here. 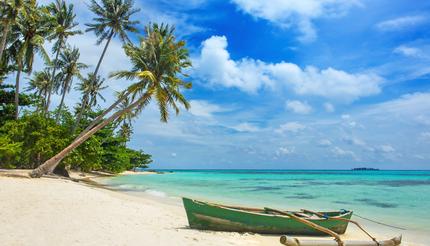 Boat on the beautiful tropical beach of Karimunjawa island, Indonesia

Located within the Lesser Sunda Islands, Komodo National Park is made up of numerous islands, but primarily Komodo, Rinca and Padar. There are said to be upwards of 2,500 Komodo dragons – the world’s largest species of lizard – living on the islands, as well as horses, deer, wild boar, snakes, and wild buffalo.

The famous Pink Beach, one of only seven beaches in the world featuring this particular hue, is quite the attraction – although the growing number of tourists has had a devastating impact on this destination, and the beach is often littered with rubbish that has washed up on the shore. Despite this, the surrounding waters of the island still continue to lure divers, with schools of colourful fish, marine invertebrates and luminescent corals hidden below the waves.

The trip to Komodo National Park requires some planning – you need to get to Bali first, then fly to Labuan Bajo on Flores Island (or take a ferry but beware that the journey from Bali to Labuan Bajo takes 36 hours). From Labuan Bajo, you get a boat to Komodo Island. 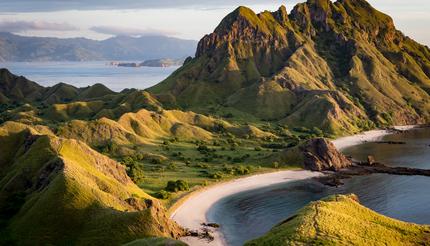 View from the top of Padar island in Komodo islands, Flores, Indonesia

Flores is one of Indonesia’s Lesser Sunda Islands and is often regarded as a launching pad to get to Komodo Island.

The name Flores comes from the Portuguese word for ‘flowers’, and it is home to Portuguese Indonesians – an ethnic group comprised of descendants of the colonial Portuguese settlers who landed in the wider region during the 16th century. Due to this history, over 90% of the island’s people are of the Roman Catholic Christian faith (the highest concentration of Catholic identity in Indonesia); in stark contrast to Indonesia’s predominant Sunni Islam populace. As such, you’ll find a variety of churches across the island – as well as a statue of Jesus in Maumere, one of the island’s major cities.

The most magnificent natural wonders here are the crater lakes of Mount Kelimutu. Each of the three lakes at the summit of this volcano can change colour on a daily basis, varying from blue, green, red to dark brown. The drastic shifts in colour are thought to be caused by volcanic gas interacting with minerals in the water. Apart from this, Flores, and its surrounding areas, have great diving spots.

The best way to reach Flores is to fly from Bali to Labuan Bajo. 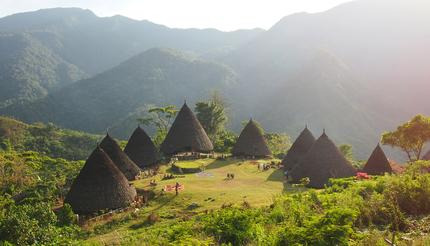 After making the treacherous crossing from Bali to Lombok in 1859, British scientist Alfred Russel Wallace immediately realised that he was standing on the edge of something unique. Although the distance between Bali and Lombok is mere 35km (22 miles), the distribution of fauna and flora is staggeringly different between these two islands, which prompted Wallace to draw the so-called Wallace Line, a boundary that separates the ecozones that transition between Asia and Australia – a region known as Wallacea. The line, in essence, explains why Australia has kangaroos, and why Asia has tigers.

Today Lombok is considered a sleepier alternative to the touristy Bali. Mawi beach on the south coast is a fantastic surf spot while the mighty Mount Rinjani in the north offers excellent multi-day trekking opportunities.

Despite bearing the brunt of devastating earthquakes in 2018, international travellers continue to flock to the island to enjoy its beauty and to help stimulate the island’s economic recovery. While most people get to Lombok from Bali (either by flight or by boat), you can also fly from Jakarta, Makassar, Surabaya and even Singapore. 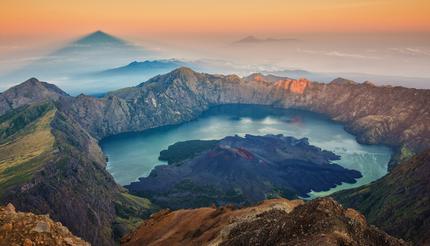 We’d be remiss in not recommending that travellers experience Bali, the most popular island in the Indonesian archipelago.

Despite its reputation for being jam-packed with tourists, Bali’s bright-green rice terraces, soaring volcanoes and palm-fringed beaches remain the must-see sights for many travellers. Bali is also noted for its Hindu culture; colourful flower offerings adorn its many temples and dynamic dance-dramas grace its many religious events. 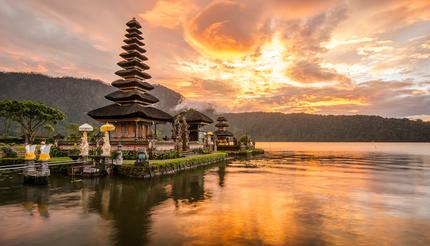 To the east of Bali, and off the northwest coast of Lombok in the Lombok Strait, there are three small islands known collectively as the Gili Islands.

Despite their relatively small size, each island offers something a little different. Gili Trawangan, the largest of the three, is named after the Indonesian word for ‘tunnel’ due to the Japanese occupation building a cave tunnel there during World War II. The locals speak good English and French, and it is the most tourist-friendly of the three islands with cafes and bars – it even claims to be the smallest island in the world with an Irish pub. In fact, the owners and staff of Tir Na Nog pub have been involved in supporting the rebuilding efforts on the three islands and Lombok following the earthquakes in 2018. Gili Meno, the smallest island, is the quietest one – promising a relaxed, secluded and romantic experience that is absent of cars and motorbikes. For more adventurous experiences, Gili Air is excellent for scuba diving, paddle boarding and kite surfing.

Geli Islands can be reached by taking a ferry from Lombok. 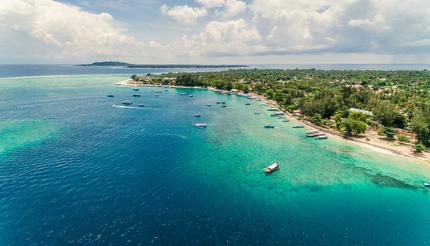 Just a one-hour ferry trip away from Singapore is Bintan Island, often touted as the country’s next Bali and as a result, resorts, hotels and golf courses are springing up like sprouting pea shoots after a night of rain.

Trikora Beach, a collection of four white sandy beaches on the eastern shore, offers the ultimate sand-between-your-toes tropical experience. Another must-see sight is Senggarang, home to a large population of Chinese whose ancestors settled here when the island was a key stopping point on the India-China trade route centuries ago. For the best seafood, head to Sebung village on the north side.

Although you can fly from Jakarta to Bintan, the easiest way is to take a ferry from Singapore. 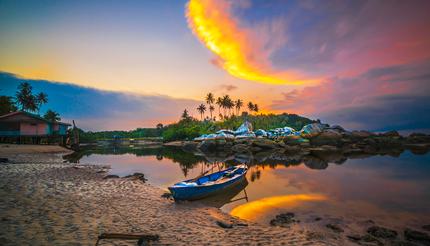 Beautiful sunset in the fishing village of Bintan Island, Indonesia

Situated in the East Kalimantan province, this exotic array of 31 stunning islands is collectively referred to as the Derawan Islands. While it is still relatively difficult to get to when compared to other islands on this list, the journey is worth it for those who have an interest in diving and nature – and that is because the islands are part of the Coral Triangle, an area known for containing some of the most extensive marine biodiversity in the world. Expect to see a vibrant marine life – giant turtles, manta rays, dugongs and dolphins just to name a few – among 460 different species of corals.

Kakaban Island is another hidden gem. Its large lake (makes up almost two-thirds of the island) is filled with stingless jellyfish. Due to being confined to the lake with no predators to worry about, these jellyfish have lost their natural defences, and this island is one of the few places in the world where this phenomenon exists.

So far, the Derawan Islands have been free from great throngs of honeymooners and bikini-clad tourists, but that may soon change as the Tanjung Redeb Airport has been expanded to receive more flights – upon arrival, tourists can take a boat to one of the Derawan islands. Also, a new airport on Maratua Island, which is one of the 31 Derawan island, is now in operation. 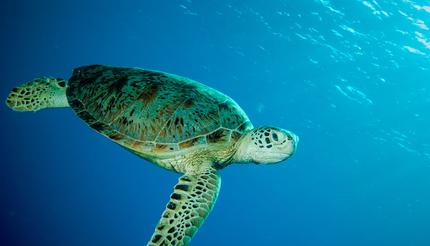 East of the massive island of Sumatra lies the island of Belitung. Once under the control of the British and the Dutch, Belitung is now one of the most ethnically and religiously diverse islands in the region. The island is predominantly made up of Bangka Malays, but Chinese, Buginese, Sundanese, Javanese and Madurese people are also present.

As Belitung is still off most travellers’ radar, its tourist activities are not as developed as on other islands. Most private resorts in Belitung offer a limited range of classes (cooking or batik-making), while other highlights include a visit to the Lengkuas Island and its 19th-century lighthouse and a hike up Baginda Hill (a large boulder).

To get there, take a 45-minute flight from Jakarta to Tanjung Pandan on Belitung Island, or you can take a 4-hour speed boat ride from the larger neighbouring island of Bangka Belitung. There is now a direct flight from Singapore to Belitung too. 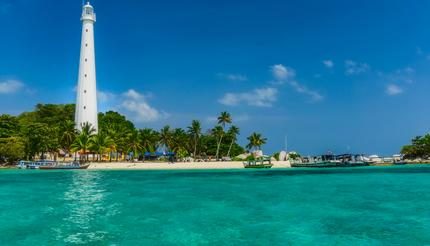 Famous for the production of spices, the group of Banda Islands is a fascinating location with a rich history that has not always been as pretty as the island’s views. That is due to the fact that Banda Islands were, at one point, the only source of nutmeg and mace in the world. Many empires valued the produce of these islands – from the Persian, to the Roman Empire and eventually the colonial powers of the Portuguese, Dutch and British, with the latter two fought a few bloody wars to gain control of the lucrative trade.

Today, the nutmeg plantations are long gone, and the islands are a hotspot for affluent tourists who come for its beautiful coral and marine life where divers regularly encounter large schools of dolphins and whales frolicking in the water.

Banda can be reached by a small plane or a ferry from Ambon; both modes of transport operate seasonally and may cancel if the weather turns bad. 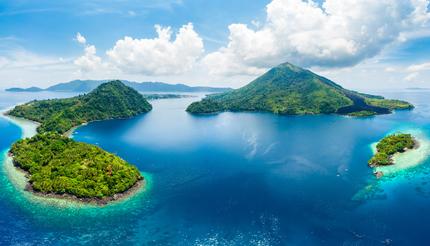 Before you go, check out the Indonesia travel guide.