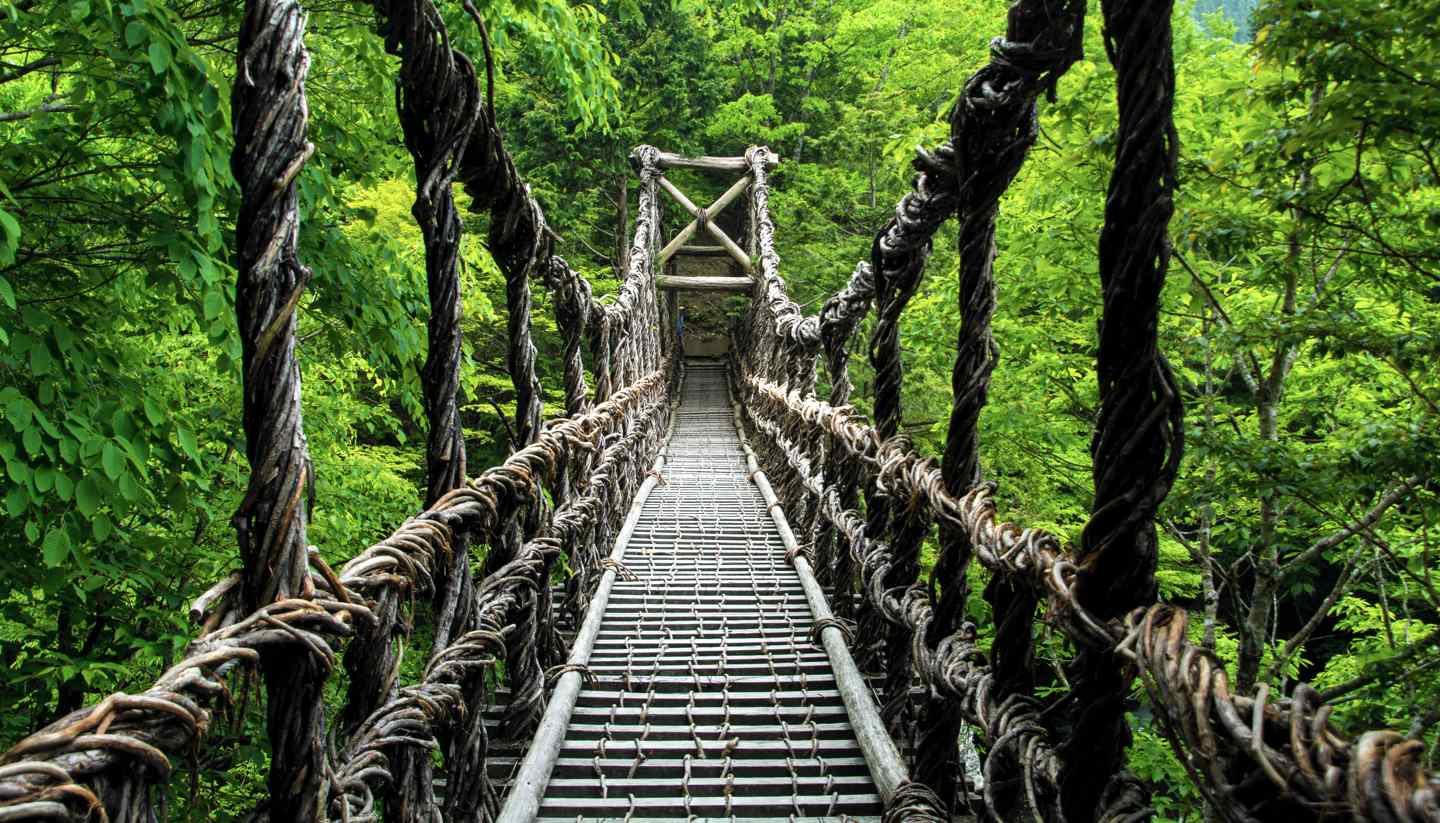 Occupying the western part of Tokushima Prefecture on the island of Shikoku, Miyoshi is a relatively new city – having formed in 2006 through merging six former towns of Mino, Ikawa, Ikeda, Yamashiro, Nishi Iya and Higashi Iya. The municipal district covers roughly 721km² (278m²), similar to the size of New York City, with soaring mountains, sunken valleys and green grassy plains covering over 90% of its land. Against this pristine backdrop of wilderness, Miyoshi makes an ideal hub for those who seek to reconnect with nature and explore hidden gems in this remote corner of Japan. 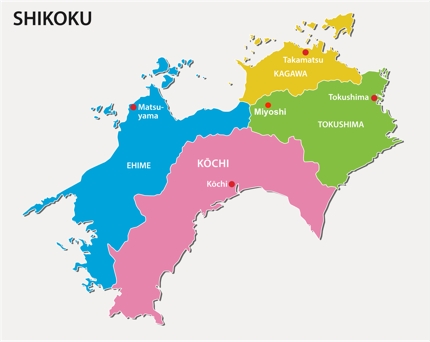 The map of Shikoku and its four prefectures

Tokushima Prefecture, on the eastern side of the island of Shikoku, is connected to Honshu island by the suspension bridges of Akashi Kaikyō and Ōnaruto. You can choose to take a bus, train or drive yourself. Once you’ve crossed the Ōnaruto Bridge, Miyoshi is just 87km (54mi) towards the west.

If you prefer a scenic journey on board a ferry, check out Nankai Ferry, which has multiple services from Wakayama on Honshu to Tokushima. After which you can hop on a train from Tokushima to Miyoshi.

Flying is another option as Miyoshi is close to two airports – Takamatsu Airport is just 43km (27mi) away, while Tokushima Awaodori Airport is a bit further at 87km (54mi). 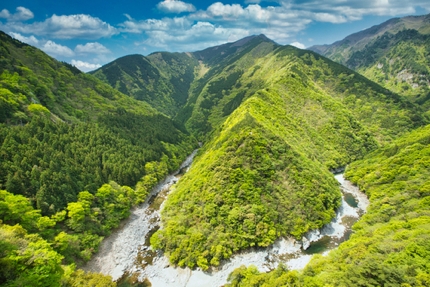 Undoubtedly the jewel in the crown of Tokushima Prefecture, the Iya Valley is where old-growth trees cover the steep hills that peek over the valley floors. Along the bottom is where the Iya River meanders, cutting a deep notch into the landscape, bit by bit over many millennia. The vistas are epic, so glorious that you’ll find yourself slowing your pace and allowing yourself plenty of time to drink in the views.

Top attractions in Iya Valley include Oboke-kyo (Oboke Gorge), the Peeing Boy Statue, Kazurabashi (Vine Bridge), Ochiai Village, Kakashi no Sato (the Village of Scarecrows), and Oku-Iya Nijū Kazurabashi (Double Vine Bridges), all of which are served by bus services from Awa-Ikeda Bus Terminal or the JR Oboke Station.

Oboke-kyo (Oboke Gorge) is where most tourists start the journey of exploration. The best option is to take a sightseeing boat that cruises gently down the river. The captain will also point out strange rock formations along the way. All sightseeing boat tours start and end at a dock near to Oboke Station and Lapis Oboke. 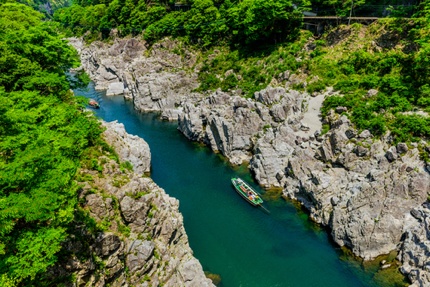 Lapis Oboke is like a multipurpose-hub, housing a tourist information centre, a café, shops and two museums – one of which features rocks and gemstones, while the other one is all about yokai (ghosts and goblins) relating to the local folklore passed down from generation to generation.

Moving through the valley, the next famous attraction is the Peeing Boy Statue. Perched precariously on a slab of exposed rock high above the valley floor, the statue is a symbol of innocent courage. As legend has it, local hikers would walk up the hill and the brave ones would stand on the rock and pee into the valley below. Nowadays, you’re more likely to see tourists taking selfies with the statue than taking a leak to prove a point. Not far from the statue is the four-star Hotel Iya Onsen, which runs a cable car that takes guests down to the hot spring bath at the bottom of the valley. 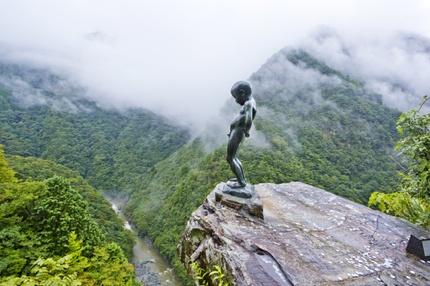 About 7km (4mi) from the Peeing Boy are Kazurabashi, bridges made of mountain vines. Classic icons of the Iya Valley, there were 13 such bridges dotted throughout the area once upon a time, but nowadays only three have survived. One is located in the Nishiiyayama Village in Miyoshi, while the other two can be found further east towards Mount Tsurugi. Among the three, most visitors go to the one in Nishiiyayama as it is the longest (at 45m or 148 ft), easier to access, and has better facilities. 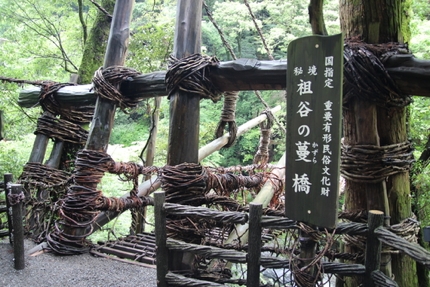 Kazurabashi, one of the vine bridges in Iya Valley

Nearby, the Ochiai Village is a tranquil spot known for a collection of classic houses surrounded by terraced vegetable plots, all spread across the face of a mountain. In the centre of the village stands Nagaoka-Ke, a thatched roof historic building that’s opened to the public. Moving deeper into the valley – if you are taking the bus, you must transfer at Kubo and switch to a service that goes to Mount Tsurugi – you will come to the intriguing ‘Scarecrows Village’ of Nagoro, or Kakashi no Sato in Japanese.

Before introducing the village, it pays to mention that over the last few decades, many Japanese villages have seen a decrease in population as work gradually dies out in rural communities and young people move to cities in search of opportunities. Nagoro was no exception – when a nearby dam cut its workforce by replacing the manual system with an automated one for better control and management, the village’s population dwindled from a few hundred to just about 30.

In response to the village’s depopulation, a resident named Tsukimi Ayano started to make life-sized models in a bid to create companionship. The project started with just a few dummies in 2003 but now there are over 300 models doing various activities – waiting at the bus stop, standing in the fields (propped up by farming equipment), attending a class, or simply sitting in silence. 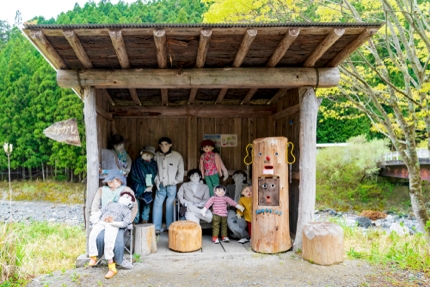 The 'Scarecrows Village' of Nagoro The 'Scarecrows Village' of Nagoro

Not far from Nagoro are the other two vine bridges, known collectively as Oku-Iya Nijū Kazurabashi or Double Vine Bridges. The longer one is called Otto no Hashi (the Husband Bridge), while the shorter one upstream is called Tsuma no Hashi (the Wife Bridge).

While there are buses serving these attractions, they don’t run frequently, so it pays to plan ahead by checking the timetables before you go.