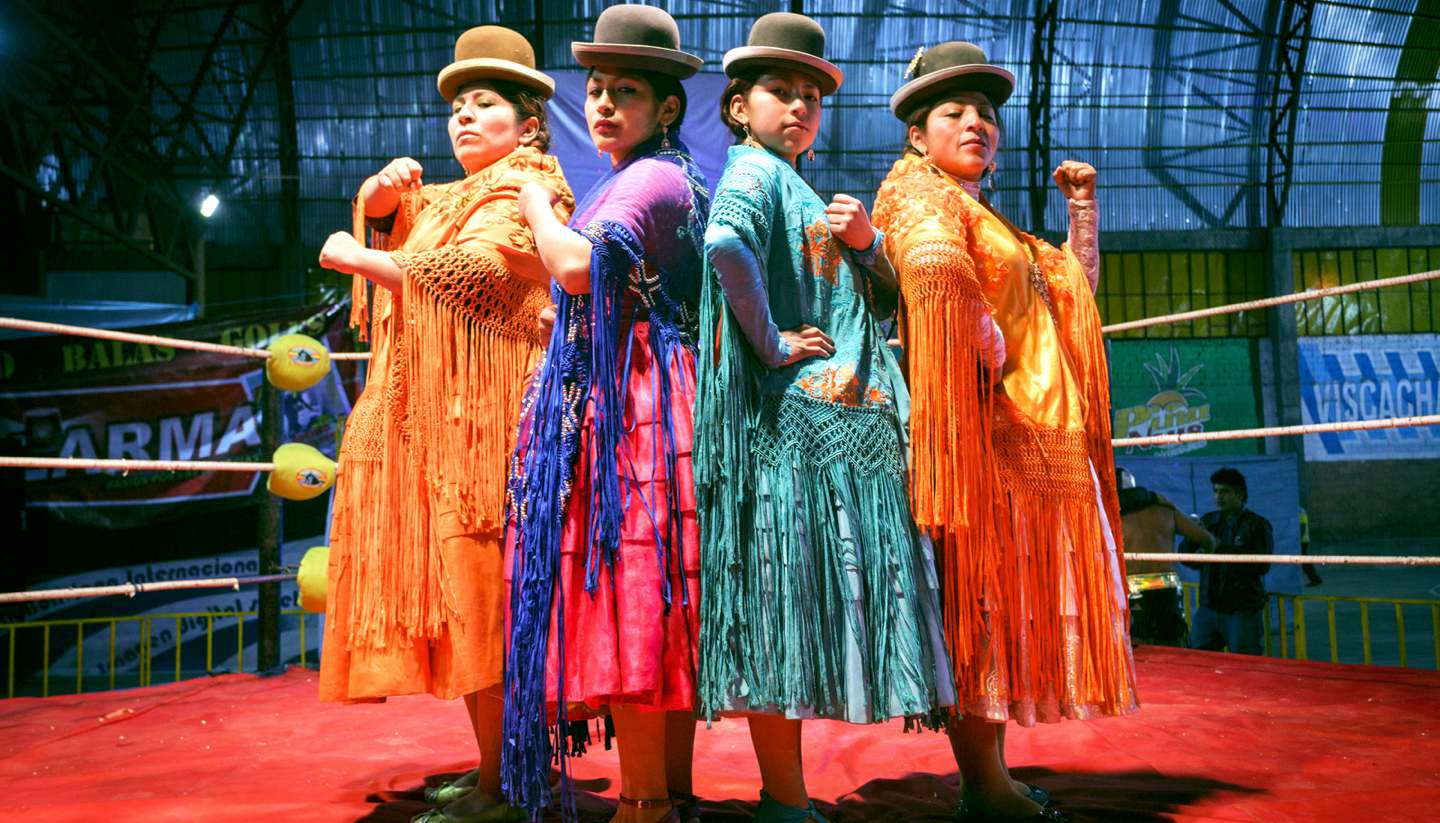 In Bolivia, female wrestlers, known as cholitas, are tearing down stereotypes with their unique theatrical fighting shows

With their puffed skirts, bowler hats and carefully choreographed performances, Bolivia’s wrestling cholitas are rapidly becoming one of the country’s must-see events. Their flamboyant shows don’t just draw the crowds – they also represent the emergence of Bolivia’s indigenous people from years of side-lining and oppression.

‘Chola’ or ‘cholita’ was originally a derogatory term for a woman of indigenous heritage. For centuries, people of Aymara and Quechua descent were openly discriminated against. Before the National Revolution of 1952, these indigenous people were denied the opportunity to vote, own land, or walk in the central square of La Paz, Bolivia’s administrative capital. While improvements were made after 1952, many continued to suffer and had little access to essential services like sanitation, education and healthcare. In 2006, Evo Morales became Bolivia’s first indigenous president and he introduced further economic and political reforms to eradicate discrimination and injustice. Along the way, native women began to embrace the terms once used to demean them, turning ‘cholo’, ‘chola’ and ‘cholita’ into symbols of pride, bravery and resilience.

Cholitas traditionally wear shawls, multi-layered skirts over colourful petticoats, and long hair plaited at the back – but it is their bowler hats that make them so instantly recognisable. Why bowler hats? There are many stories behind this European addition, but most people seem to agree that it started when a shipment of hats meant for male railway workers proved either too small or the wrong colour for the job. After trying unsuccessfully to persuade Bolivian men to wear bowlers, the hat importers turned their attention to indigenous women and found massive success. 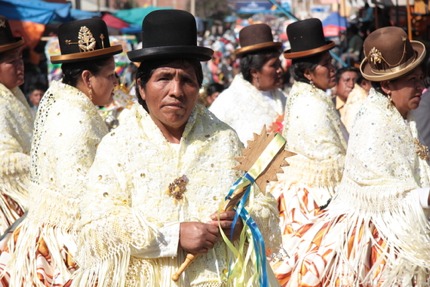 The bowler, with some fetching up to a few hundred US dollars, has since become a coveted part of cholita costume. How the hats are placed on the head can signify the marital status of the wearer – she is married if the hat is straight, or single if the hat is tilted.

During wrestling matches, cholitas don’t always wear a bowler hat, but they do put on their plated, voluminous skirts, known as la pollera. In fact, the fuller the skirt, the better it is, as it makes the hips look curvier, which signifies health and fertility. 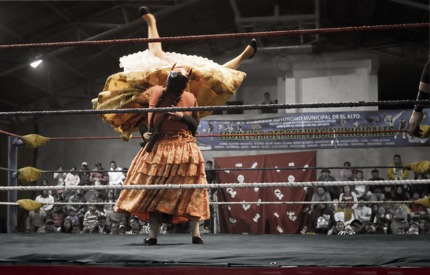 A brief history of cholita wrestling

Staged wrestling has enjoyed much success in the US and some parts of Europe since the 19th century. Performance arts fighters in Mexico built upon this tradition, adding colourful masks and costumes to develop a pop-culture wrestling phenomenon known as lucha libre.

It wasn’t until the early 2000s, though, that women were involved. The movement that was to become the wrestling cholitas began with the laudable aim of helping women affected by domestic violence. It started when a small circle of women gathered regularly, using wrestling as a way to relieve stress and restore a sense of empowerment among domestic violence victims.

The group was noted by a promoter at the Titanes del Ring league, who thought that female wrestlers might garner greater attention and boost ticket sales. It worked better than he could have imagined. Since ditching the tight spandex and masks typical of lucha libre for traditional cholita garb, the wrestling cholitas have attracted international publicity and won the hearts of the wrestling-loving public. 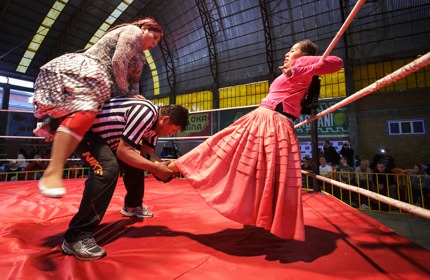 Action in the ring

What to expect from a wrestling show

Cholita wrestling is based on classic Mexican lucha libre, which is part theatrical fight and part morality play. There are usually two participants – one a good, clean-fighting técnica and the other an evil ruda who bends the rules and pushes the boundaries. The pair battle it out in a choreographed contest, which involves plenty of spectacular acrobatics, somersaulting, and other displays of athletic prowess from the wrestlers.

Fights might be staged, but that doesn’t mean they don’t get heated – headlocks, hair-pulling, punching and kicking are regularly used by both wrestlers. They also try to get the crowd roaring; showing unbridled confidence over one’s opponent or staring ferociously into the audience with bulging eyes is often met with cheers or boos.

Some cholitas also inject fun and humorous elements into the experience. They may pursue one another through the crowd, stealing drinks and kisses as they pass.

Fights usually last two to three hours, but most visitors drift in and out as the mood takes them. 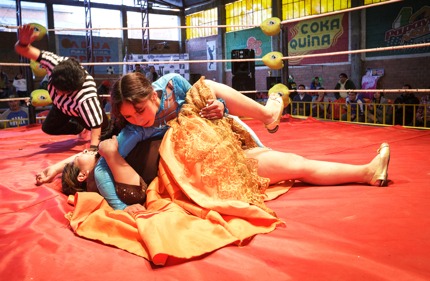 Action in the ring

The fight against domestic violence

According to the UN, a third of all women worldwide experience physical and/or sexual violence at some point in their lives. In Bolivia, the ingrained machismo culture adds even more victims to the statistics. In July 2019, a news report by Reuters mentioned that 73 femicides – the killing or a woman by a man due to her gender – took place in the first half of 2019 in Bolivia. That amounts to one woman murdered every two days.

Against this violent backdrop, it is easy to understand why many locals consider cholita wrestling – which always ends with the good técnica emerging victorious over the evil ruda – as an act of empowerment. 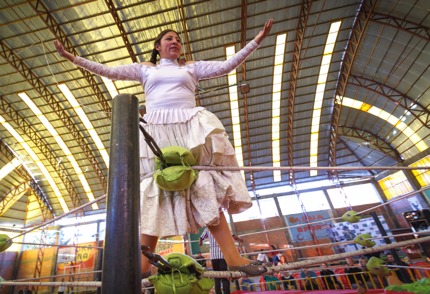 Where to see the wrestling cholitas

The city of El Alto, adjacent to the city of La Paz, is considered the cradle of wrestling cholitas, with several venues hosting matches on Tuesdays, Thursdays and Sundays. El Alto and La Paz are linked by the Mi Teleférico cable car, which has ten crisscrossing lines and they offer visitors incredible views. 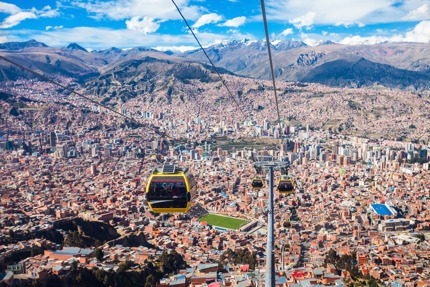 While you can book tickets to a match independently, keep in mind that El Alto isn’t the safest place to explore after dark, especially if you are alone. It is best to book with a tour agency – there are plenty of tour agencies selling match tickets and they all provide ground transport, along with a snack, a can of soft drink and souvenir.

Some agencies also include a wrestling match with tours to other attractions in El Alto or even La Paz. If you aren’t fluent in Spanish, consider a tour agency that offers a guide in your preferred language.