Norway: on the edge of the world 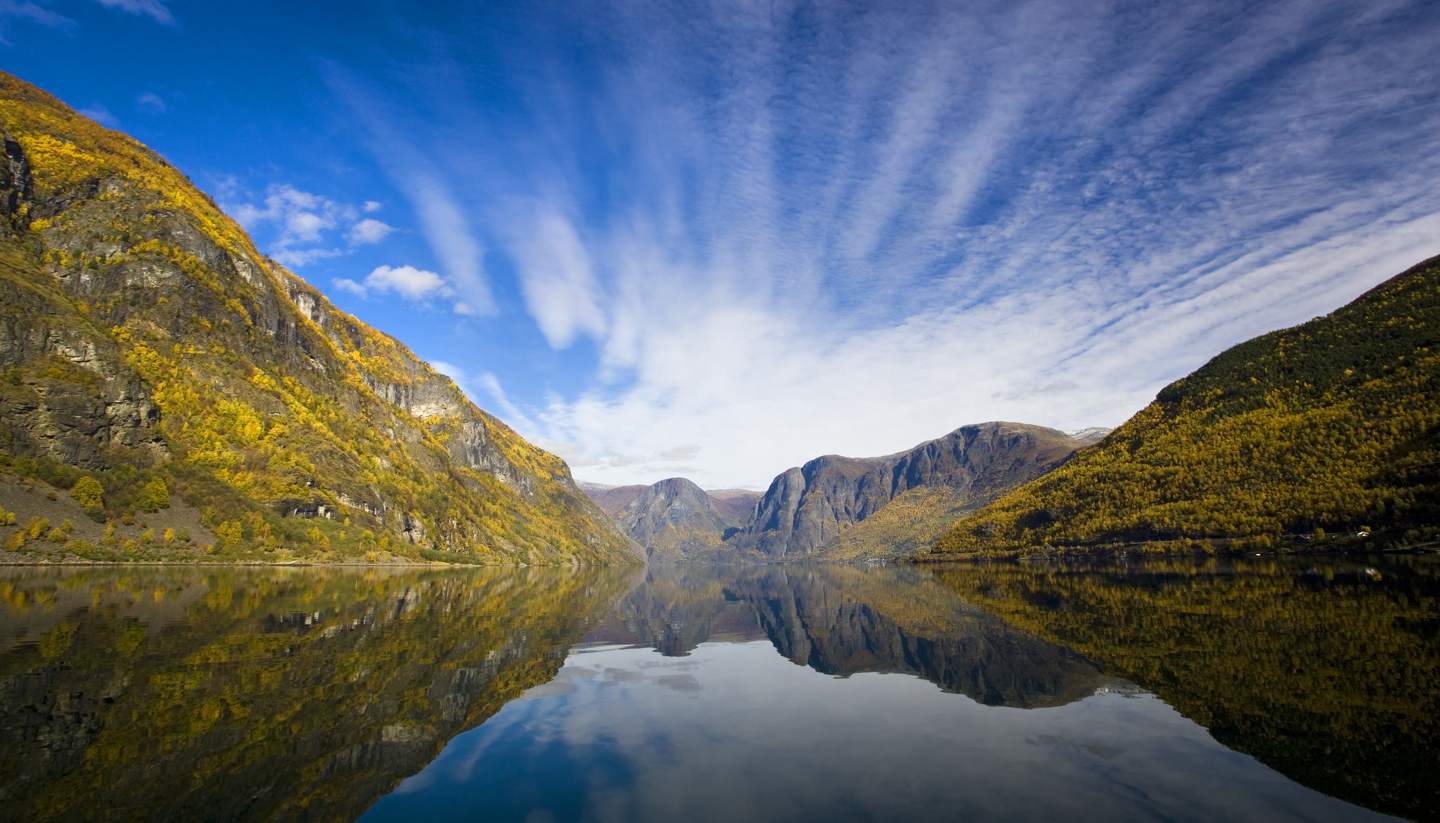 On the morning when scientists discovered our Earth might have an eighth continent, Norway’s fjords look like they belong to a ninth. The mercury is hovering just above freezing as I step out onto the speedboat. Our captain pipes up with a cautionary word of warning: “With the wind chill factor, you can expect things to feel more like minus 15°C out there”. Thank heavens I’m cocooned in thermal overlays and a floatation body suit, wearing mittens fit for a moon landing.

If Bergen on Norway’s west coast is known as “the gateway to the fjords” then Flåm (pronounced ‘flom’) is the epicentre. This Norse port village was transformed in 1941 with the arrival of a train connection to the outside world, followed very shortly by the arrival of its first tourists. Flåm’s quaint charms have made it a popular cruise ship stop, too, making February the ideal month to visit, long before the mobs begin to disembark their mega-liners from early May and swamp the village of just 350 with visitor numbers that can total some 10,000 a day.

For all the understated serenity of Flåm in winter, the long list of pursuits on offer here are anything but pedestrian. The most stylish way to arrive at the fjord-side village is on two wheels, cycling the 82km-long Rallarvegen (the Navvies Road) north from Haugastøl Station, over peaks 1,300 metres above sea level before the final pedal down the Flåmsdalen valley to the edge of the Aurlandsfjord in Flåm below.

Heart of the fjords

Travelling on the Fjordsafari, a high-speed rib boat journey down the fjords, I leave the bijou Flåm harbour behind and cruise over the tranquil waters of this stunning inlet and feel like I’m in another world. A pod of porpoises approach, as if to investigate today’s guests, taking turns flicking their fins up into the air before disappearing down into the murky waters below, at places more than a mile deep. Chills run through my thermally insulated fingers as I feel the vast, unshaped magnificence of the landscape engulf me, as though I’m right on the very edges of our planet. It could be a scene straight out of the worlds of Tolkien and William Morris, if not for the speedboat motor blaring away in the background. 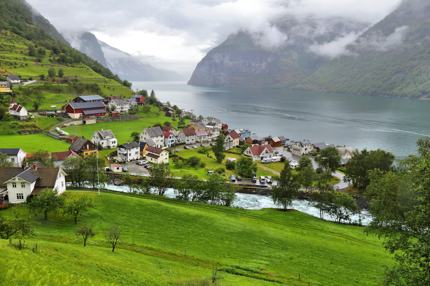 From the boat, the remote village of Undredal, population 63, looks artificially composed for a picture postcard. Its traditional Nordic wooden houses and 12th century Stave Church served as inspiration for the animated smash Frozen, yet the view over the village is reassuringly void of any forms of Disneyification. Enjoying this winter adventure from the lake, it’s hard to imagine the Stegastein viewpoint that juts out some 650 metres above us is currently awash with wannabe Queen Elsa’s, even if it does give perfect lookout from which to survey a scene resplendent with cascading waterfalls and isolated hillside dwellings.

From Flåm to mountain top

From the low-lying village of Flåm, the only advisable way out and over its surrounding hills is on the iconic Flåmsbana (Flåm railway), which connects the village to Oslo and Bergen via Mydrol. The railway’s ear-popping climb towards the summit of Myrdal mountain is set against a backdrop of bountiful waterfalls and wild backcountry. Just 20km (12.5 miles) in length, a third of the route is tunnelled, which makes capturing a good shot of these majestic panoramas a real art form. You won’t be the only one swinging from one side of the train to the other, however; Flåm railway’s carried nearly one million passengers in 2016 and in peak season it’s a sell out experience. 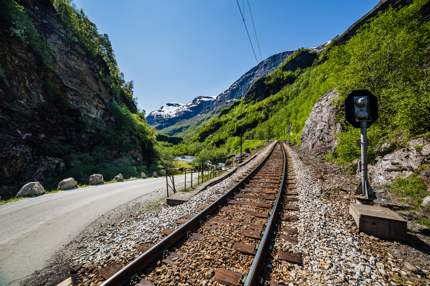 The perfect antidote to the snap-happy hordes is jumping off at Vatnahalsen station, an isolated stop where, just 50 metres away, sits Vatnahalsen Høyfjellshotell AS, a 19th-century lodge and secluded retreat in the midst of the snow-covered wilderness. The cosy reception area beckons me in with the sweet smell of a waffle machine firing away on all cylinders, cooking up thick slabs of this hearty Nordic fare – best served with sour cream and the local lingonberry jam. Between visits to the sauna and snooker room, any stay at this remote hotel is a boon for real adventurists. Telemark skiing is a buzzword around these parts and the TV lounge is littered with mountainside maps, all stencilled with the faint outline of carefully considered off-piste routes. The discipline of throwing yourself down a backcountry slope with only the very tips of your boot attached to yours skis was, naturally invented here in Norway, taking its name from the county where it was first practiced.

For visitors like me, who don’t want to worry mountain rescue teams, snow boots are provided free of charge. I try a pair on for size and, after the initial sensation of clunking around in clown boots passes, I’m left with an almost super-human sense of daring as I dart across the tough wintery terrain. I’m Scott of the Antarctic, I imagine, chasing down the fresh snow in my blizzard-strewn path, all the while cursing the one barely flickering bar of reception on my phone. How can I update Instagram now? 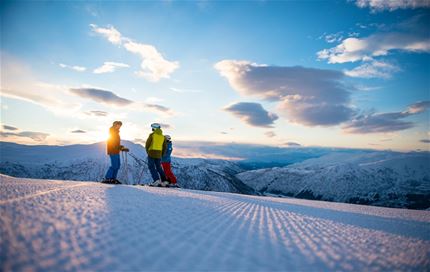 Just an hour west of Flåm by road, Myrkdalen would have been a hit with Scott. The family-friendly ski resort is the largest in Western Norway and treasured for its off-piste terrain and long, snow-sure seasons that run November through May. Less certain than the snow are my legs, each feeling anxiously ill-prepared as I strap-on the cross-country skis. They are so thin and lightweight that manoeuvring around is a different sensation from the one most downhill skiers will know.

It’s said of Norwegians that they’re born with skies on their feet. In deepest Sussex, all I was given at birth was an innate suspicion of all things icy and slippery. So in the country that gave us the word ‘ski’, I’m reminded that cross-country is considered something of a national pursuit. Spending a night in the Myrkdalen Hotel, with pictures of Norway’s many Winter Olympic Champions, such as like Johan Grøttumsbråten, surrounding me, I pray some of their magic might rub off.. Stumbling around for balance in the early morning sunlight – panic setting in before I’ve even reached my first slope – I shouldn’t be so surprised to find it hasn’t.

“I will say cross country skiing is harder than alpine.” My instructor Asmund Fedje says, trying his best to reassure me, while I work out how to move one of my lanky, uncooperative legs in front of the other. The great appeal of cross country, I’m told, is that – whether up or downhill – it offers a unique sense of freedom on the snow. It just feels that in my case that freedom’s going to be a hard-won. Between a series of minor mishaps, Bergenite trainer Asmund is keen to talk up his country’s music scene, especially face-painting death-metallers Dimmu Borgir and electro duo Röyksopp. After two hours of cross country training, we’ve only covered about 50 metres of country, but I do come away with a new found respect for black metal, the ability to snow plough with style and, more importantly than all, the overriding desire to do it all again. I’ll chalk that up as a success.

Seeing the slopes of Voss busy with young families out enjoying the local school holidays, it’s obvious adventure runs in the blood here. I shouldn’t be so surprised to learn one of this region’s most popular dishes is smalahove, or steamed sheep’s head. I am, if not clear by now, rather more adventure-adverse myself and stick with the lamb joint at Marg & Bein, a contemporary restaurant in Bergen’s student-centred district of Nygårdshøyden.

To cap any adventure weekend in Norway, at least one night in Bergen, the former capital, is essential. The city is thriving with a burgeoning cuisine scene and boho shopping districts, and a trip to Apollon is the perfect gateway into the city’s eclectic nightlife scene. The indie record store operates as a late night bar with a chalkboard busied by an ever-changing menu of tap beers.

If you really want to get high, you can ride the Fløibanen funicular up more than 300 metres for an unrivalled view of the city and its UNESCO-protected wharf from the top of Mt Fløyen – it operates until 11pm everyday. From here, forested hiking routes can lead you back deep into the Norwegian wilderness. Or, back in the badlands of Apollon, you can enjoy a pint of HaandBryggeriet beer and pick up a copy of Dimmu Borgir’s latest record, for a side of Norway that’s a million miles from the vast, breathtaking fjords of Flåm, yet somehow – right here, right now – feels just as awe-inspiring.

Things to Know Getting There Bergen Airport is the second busiest airport in Norway and operates routes from the UK, Germany, Spain, Sweden, Denmark, Poland, and Iceland. For more information see our Bergen Airport guide. When To Go Winter in the Norwegian counties of Hordaland and Aurland is relatively mild compared to the northern regions of the country. Temperatures in Bergen and the surrounding areas can drop as low as -15°C (5°F) between November and March but they average around zero degrees Celsius (32 °F) during the day. For more information check out our Bergen travel guide. 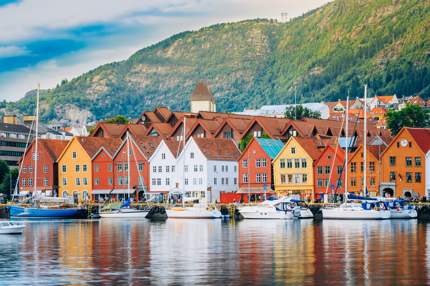