After two decades of reconstruction Rwanda is blossoming as a beautiful country to visit.

Rwanda is a beautiful country and it has become a remarkably stable, safe and affordable tourist destination in the two decades since the terrible events of 1994. It has not forgotten the genocide, but it has transformed itself. With the recent introduction of direct flights from London Gatwick to the capital, Kigali, with Rwandair this is a destination tipped to take off in the next few years.

Rwanda is one of only three places in the world where mountain gorillas can be seen in their natural habitat (the others are Uganda and the Democratic Republic of Congo). These magnificent and endangered primates can be tracked at Volcanoes National Park, in the northwest of the country but only two hours from Kigali. There are currently 10 gorilla families in the park, and each can be visited with for an hour by a group of eight people. The cost – $1500 per person – may seem prohibitive this is literally a once-in-a-lifetime experience. Only 80 permits are issued per day and they are in high demand so book well in advance. Besides gorillas, the park has golden monkeys, spotted hyenas and elephants, as well as hundreds of bird species. Within the park there are five volcanoes, with Mount Karisimbi the highest at 4,507m/14,787ft; it can be reached via a two-day hike. 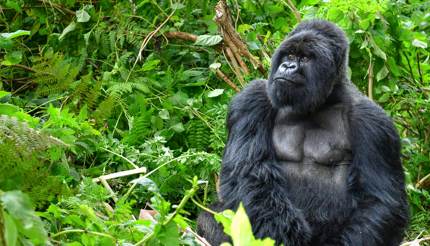 Although not typically thought of as a safari destination, Rwanda’s little-known Akagera National Park, on the country’s eastern border, now hosts the Big Five after the recent re-introduction of lion and rhino (the other three of the Big Five, in case you were wondering, are elephant, leopard and buffalo). If you don’t visit with a safari tour company, this well-managed park offers trained guides with their own vehicles, as well as guides from the local community who will hop in with you if you’re in your own vehicle. There are also a number of lakes in the park, and boat cruises on Lake Ihema offer a high chance of viewings of hippos as well as crocodiles. Akagera can be visited on a day trip from Kigali, but there are two lodges and campsites should you wish to stay longer. The only accommodation inside the park, Akagera Lodge, set on the shores of Lake Ihema, and offers spacious rooms and a swimming pool.

The Nyungwe Forest National Park was created in 2004 as part of an initiative to expand Rwanda’s tourism offerings beyond the mountain gorillas. In the southwest of the country, the it is mainly mountain rainforest; as well as over 275 bird species, there are 13 species of primates, including chimpanzees. Visitors can join a tracking safari, and as with the gorillas there’s a maximum of eight people per group. Besides that, there are 13 hiking trails ranging from one to eight hours in length – be warned, though, that it’s fairly challenging terrain and it’s not easy to spot wildlife through the thick forest. Most visitors opt for the Igishigishigi Trail, named after the giant ferns found here, as it includes a 50m-high suspension bridge from which you can view the tree canopy. The former Nyungwe Forest Lodge, in a tea plantation just outside the park, is currently being renovated into a gorgeous One&Only property, Nyungwe House, due to open in October this year. The park is a five to six-hour drive from Kigali, but you can also take a quick flight with Rwandair. 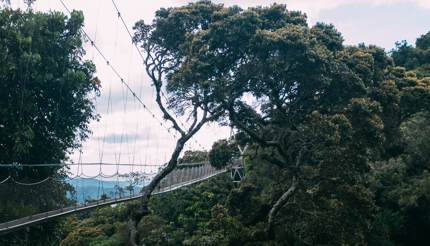 Rwanda’s capital is well worth a few days’ visit. A guided tour is the best way to see the city, particularly if you’re short on time, as you’ll discover the main attractions through the eyes of a local. Go Tours offers excursions that include a visit to nearby Mt Kigali, which has splendid views of the city, as well as a local market and restaurant. Tours end at the Kigali Genocide Memorial which is the resting place of 250,000 victims (the final death toll was over 800,000). As well as documenting the genocide itself, the event is put into historical context and comparisons are made with similar events in Japan, Germany, Cambodia and Bosnia. It’s a sobering and moving experience, particularly the children’s memorial site.