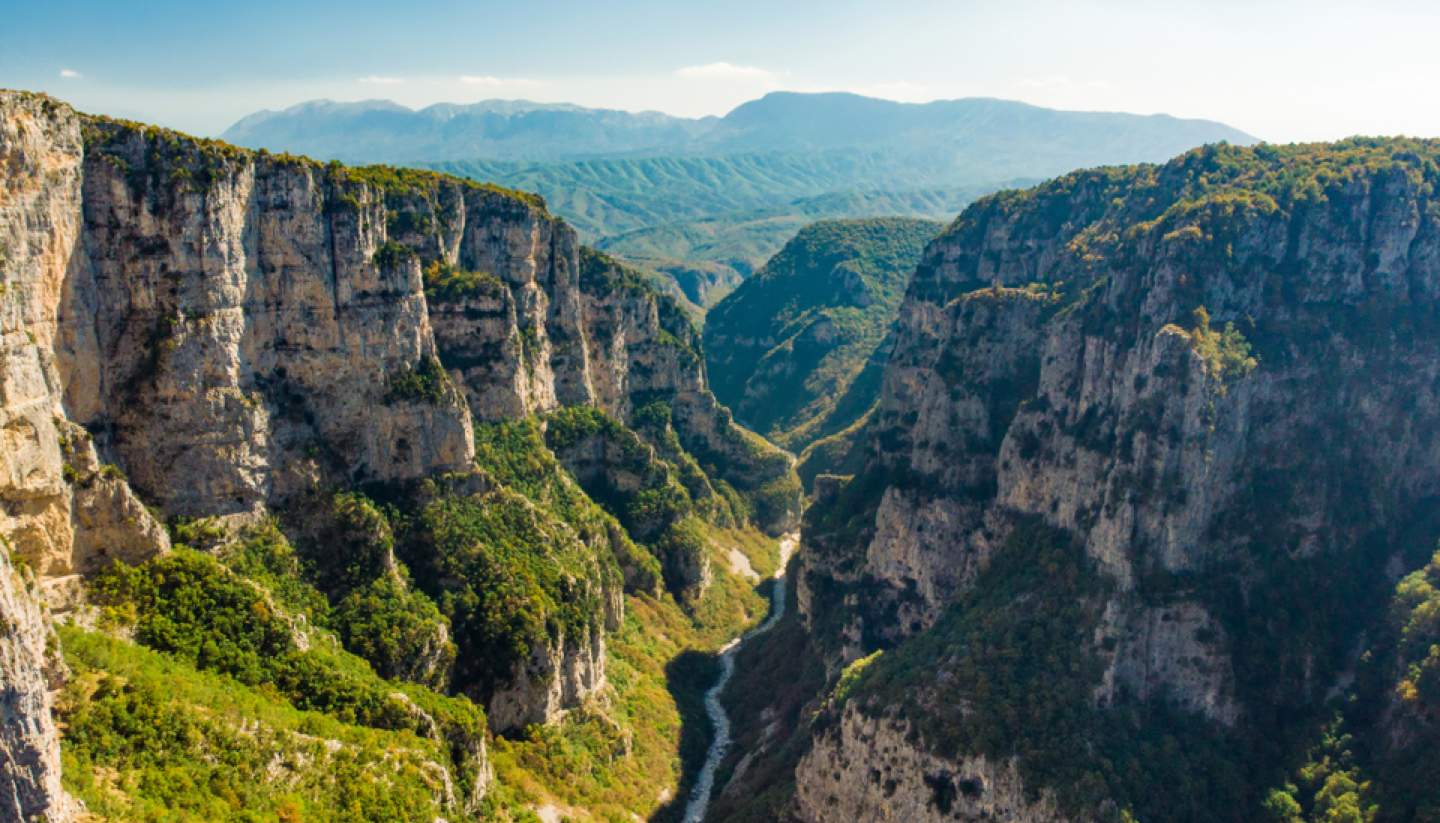 From sheep shearing, wool cleaning, spinning, weaving to plant-dyeing, these subjects are as foreign to a city dweller like me as a sheep-filled meadow. But as I take hold of the velvety soft and delicately coloured wools, words fail, and I know I’m hooked.

I’m in Epirus, a region widely touted as Greece’s best-kept secret as it gets very little attention from the usual sun-and-sand crowds that Greece attracts. In other words, the lush forests, beautiful arch bridges, and stunning cliff-top monasteries in Epirus are devoid of tourists. A few who have made it here look to experience a ‘get-away-from-it-all’ holiday. It is exactly the desire to escape that inspired me to visit Rokka, a working farm-slash-guesthouse in the village of Elafotopos in Epirus. I’m here to learn about the age-old craftsmanship of weaving and celebrate fresh produce with Lena (the owner), Luna (the dog), and one of the many aunts.

Ioannina, a great base

The region of Epirus straddles between the Pindos Mountains and the Ionian Sea in the north-western part of Greece. If it helps you to visualise, it sits just below Albania and above West Greece.

The region consists of fertile plains, deep valleys, limestone ridges and verdant foothills that give way to snow-capped mountains. There are also pockets of scenery where ridges form dramatic gorges, as well as meandering rivers that sustain a myriad of ecosystems.

Ioannina, the largest city of Epirus, makes a great base for travellers to explore the region as it has a wide range of accommodation and dining options, particularly near Lake Pamvotida. The aptly named Lake Hotel is a 5-star hotel with impeccable service and yet easy on your wallet. 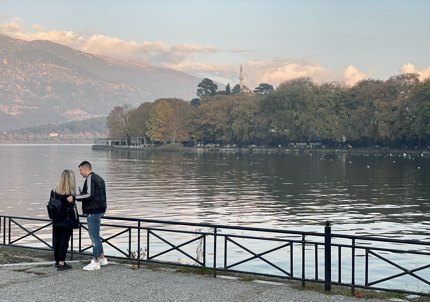 Nearby, the Castle of Ioannina looms large, with the tower of Fethiye Mosque visible above the foliage. Within the castle compound you will find the Silversmithing Museum which charts the long history of silversmithing in Ioannina, particularly during Ali Pasha’s rule (1788 to 1821).

The 46 villages of Zagori

Ioannina sits just 30km (19 miles) south of Zagori, a mountainous area famed for its 46 traditional villages. The word Zagori means ‘behind the mountain’, the visual impression that one would gather when looking towards the Mitsikeli Mountain from the plain of Ioannina.

Zagori villages are remarkable because they have stone-built cottages lining narrow cobbled streets, with arch stone bridges connecting them to the outside world. In some of the villages, you may find a small square with tables and chairs scattered under a large plane tree – an area for locals to gather and visitors to enjoy a cuppa, savouring a peaceful moment or two.

Monodendri is undoubtedly one of the most visited villages within Zagori as its main cobbled street leads visitors to the 15th-century Monastery of Ayia Paraskevi, perched on a giant rock overlooking Vikos Gorge. The main altar of the monastery contained beautiful frescoes depicting the laudable life of St Paraskevi, who is widely known for healing eye ailments. July 26 is the feast day of St Paraskevi and on this day, villagers gather to celebrate with bottles of tsipouro (distilled grape liquor) and large trays of cheese pies amid clarinet-playing crowds. 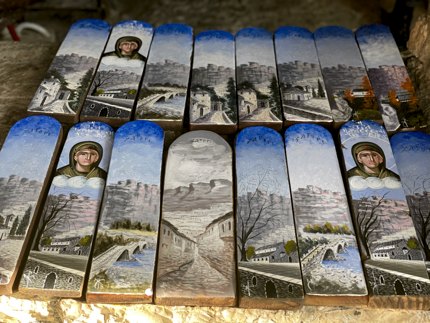 Ilios is the only monk at the Paraskevi Monastery; he also paints local scenery on small planks 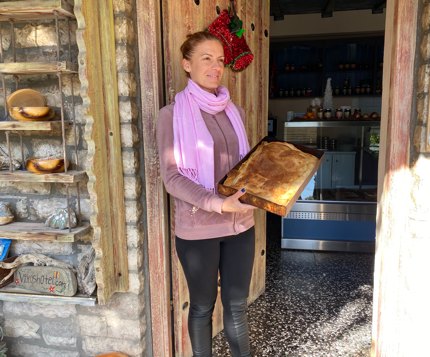 Said to be the deepest canyon in the world in terms of its width-depth ratio – the narrowest part is just a few meters wide below the towering cliff – Vikos Gorge is a stunning wonder which you can take a peek of from the back balcony of Paraskevi Monastery.

For visitors who desire a rewarding mix of adventure and spectacular scenery, Vikos Gorge is crisscrossed with hiking trails – Monodendri to Vikos and Vikos to Papigo are two highly recommended routes. The best time to hike is undoubtedly summer when it is warm and dry. Autumn can be rainy, but you will get to see the forests burst with a brilliant splash of colour.

Lena, the beating heart of Rokka

About 12km (7 miles) west of Monodendri lies Elafotopos, another Zagori village. It is on the sun-drenched slope of Elafotopos that Lena runs Rokka, a charming farm stay that shares the best fleece-to-garment and farm-to-table experiences with its guests.

The name Rokka actually means the stick that holds the wool as you spin with the spindle. It was the passion of weaving that first drew Lena to Zagori 18 years ago. But it was the tranquil backdrop of olive groves and sheep grazing on pastureland so pleasing to the eyes that lured her to stay on. The quality of life here is high, as Lena would often say, even though there is always something to do here.

From sunrise to sunset, Lena and her team are constantly working – churning butter, making cheeses, shearing sheep, harvesting vegetables, spinning yarn, weaving – yet every task is accomplished without a sense of urgency. The pace of life is in sync with the rhythm of the four seasons. This is a place to reconnect with oneself and also with something greater than oneself, the invisible sphere that gives us a sense of belonging. This is living.

Case in point – on this sunny morning in the vine-swathed courtyard, Lena and one of the many aunts show other guests and myself how to make an “easy pie” – essentially a pancake-like dish made with fresh milk, eggs that were collected yesterday, flour that Lena and her friends grind in a watermill nearby, and the all-important homemade feta which is central to Greek cuisine.

While the pie is cooked on the fireplace, Lena turns her attention to the basket of wool. During the shearing season, family members, neighbours and friends all gather around to help one another sort and wash fleece, before combing, spinning, weaving, dyeing and using them to make coats that keep you warm in the harshest of winters.

The whole process from fleece to garment takes months, but you can definitely learn weaving in two days (even if you are a total novice) at Rokka under the tutorage of Lena, whom I must add, has the patience of a saint.

Considering the region of Epirus is dotted with farms producing the best milk and freshest produce – it is a challenge to go on a diet in Epirus.

Cheese is in abundance. Local feta cheese is most popular, while other types of cheese include metsovone (semi-hard smoked cheese), anthotyros (fresh cheese made with milk and whey), galotyri (creamy cheese), kefalotyri (hard and salty cheese), manouri (semi-soft cheese) and vasilotyri (spicy cheese).

Pies (Epirote pites) stuffed with a verity of cheeses, vegetables, or meat are widely available. Along with standard fares like local sausages and grilled meat.

Tsipouro (distilled grape liquor) is the go-to drink for every occasion. While most types of tsipouro do not contain anise, some do, with the anise giving it a distinctive aromatic taste. Tsipouro is usually served neat, cool, and in small glasses before and after a meal. 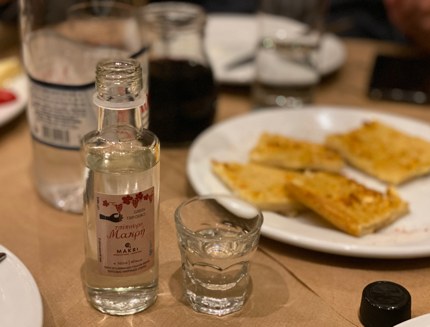 The region of Epirus enjoys a Mediterranean climate along the coast to an Alpine climate in the high-altitude interiors.

Due to its elevation and inland location, Ioannina is categorised as both Mediterranean as well as humid subtropical, weather wise. The city enjoys plenty of sunshine from April to September – this period is often considered the best time to visit. July and August are the driest months, with temperatures averaging 25°C (77°F). November to March are generally wet and cool with a slim chance of snow in January.

The forested area of Zagori sits north of Ioannina at a higher elevation, meaning it is colder during the winter months, so wrap up warm if you plan to visit. The period between April and August is generally the best month to visit Zagori as it is warm and dry.

Getting to Ioannina and Zagori

There are daily flights serving Ioannina and Athens. During the warmer months, it is also possible to catch a direct flight from Larnaca (Cyprus), Stockholm and Gothenburg in Sweden to Ioannina.

Most people, however, prefer to drive from Thessaloniki, via highway E90. The distance between Thessaloniki and Ioannina is about 262km (163 miles), usually less than 3 hours by car.

Before you go, check out the Greece travel guide.